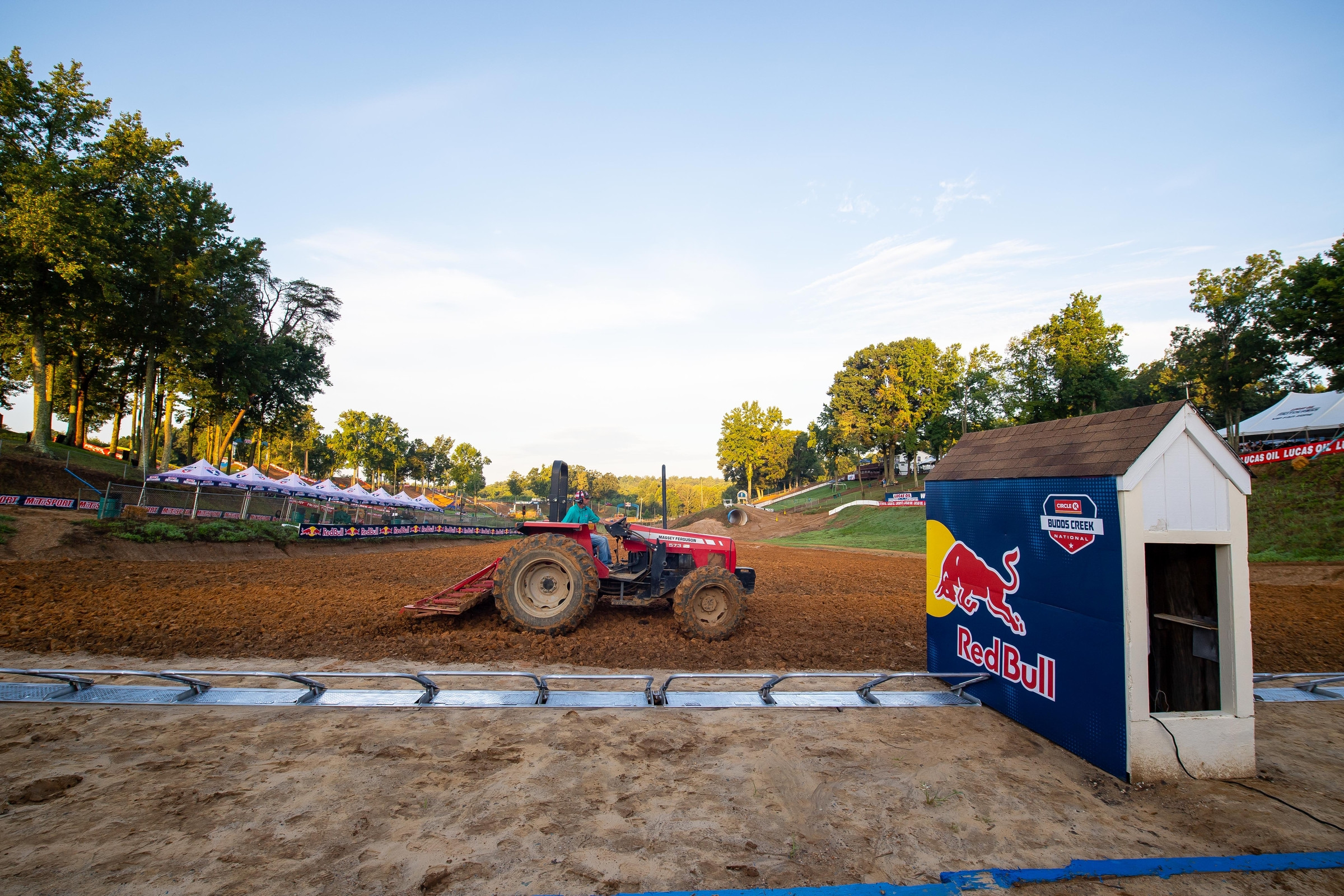 Like last week, the Lucas Oil AMA Pro Championship is returning to a historic venue we all missed in 2020 due to COVID-19. The field is locked and loaded here at Budds Creek Motocross Park, ready to take on the Maryland dirt. While there was heavy rains on Thursday and Friday and rain was on the forecast for today, we have lucked out so far as the sun was shining as we made our way into the facility. Throughout the rest of the day we are expecting a possible rain shower at some point but now we might be dealing with hot temperatures moreso than worrying about a full-blown mudder like some were three days ago. The track escaped rain last night and should be in great condition today.

There are two changes to the track, one is the top of the track by the team managers’ town has a quicker turn that goes right from the hill/roller to the off-camber turns before the Lucas Oil Drop. And following the big uphill Fly Racing Triple, the quick off-camber U-turn has been taken out. Riders will come from the Fly Triple, make a 90-degree left and straight before heading downhill and into the turn before the Big Gulp massive jump.

Last weekend, when it seemed Justin Cooper was rolling with an untouchable first moto win, Jett Lawrence rebounded in the second moto to put in a dominate ride, as Cooper struggled with bike setup on the changing track. With the 450 Class riders going first, the track had another moto on it, making it rougher, and Cooper said he did not make the adjustments necessary in order to feel comfortable to push in the second moto. Jett Lawrence’s day allowed the now 18-year-old to close the championship fight up to only four points. Last time we were at Budds Creek it was Jett’s second pro race. Now he has the chance to retake the 250 Class points lead. Will he leave with a little extra red on his Honda or will J-Coop once again leave with a hint of red on his Monster Energy/Star Yamaha Racing YZ250F?

Behind them, Jeremy Martin and RJ Hampshire are close to those lead two. Remember, Hampshire picked up his maiden win as a pro here in 2018, so he could very well find himself with the overall win today or shaking up the points between Lawrence and Cooper. The rest of the top 20 is points is a little banged up, which could lead to some not-so-familiar faces in the top ten today. Names such as Levi Kitchen, Seth Hammaker, Dilan Schwartz, Preston Kilroy, Kaeden Amerine (his pro debut), and more could be those getting into the mix. As mentioned, last weekend’s Unadilla National was brutal to the field. Make sure to check out our Budds Creek injury report before setting your PulpMX Fantasy team. And check out the full entry list for both the 250 and 450 Classes below.

In the 450 Class, Ken Roczen did what he could to gain as many points as possible on championship leader Dylan Ferrandis, as the German went 1-1 for the second time this season. The gap is still at 39 points, so Roczen is still mathematically alive as we have today and three more rounds, but he needs to continue to put as many points as possible on Ferrandis each moto. Luckily for Ferrandis, at Unadilla MX even when he did not appear to be the guy to beat, he still managed two top-three finishes. He benefited from Justin Barcia being out with an injury, Aaron Plessinger (who was fast all day) crashing out of moto one, and riders such as Joey Savatgy, Eli Tomac, and Chase Sexton having issues of their own. Luckily for Plessinger, even after his big get-off last weekend, he escaped injury and will be racing today. Sexton has really ramped it up the last few rounds. He won the overall at the Washougal National and then came in hot to Unadilla, only to crash in the first turn. He came all the way back from 40th to 11th in moto one and finished second to Roczen in moto two. The #23 could very well contest for his second win of the season today. Marvin Musquin got the ball rolling last weekend as the #25 picked up his first overall podium of the season with 4-4 finishes.

Check out the full broadcast schedule for today below.

And lastly, while the Unadilla National is typically where the Team USA roster for the Monster Energy FIM Motocross of Nations is announced, the 2021 roster was bumped to today. But now, as Davey Coombs explained in Racerhead #34 yesterday, Mike Pelletier of the AMA said the announcement would instead come several weeks from now at the Fox Raceway 2 National at Fox Raceway at Pala on September 4.