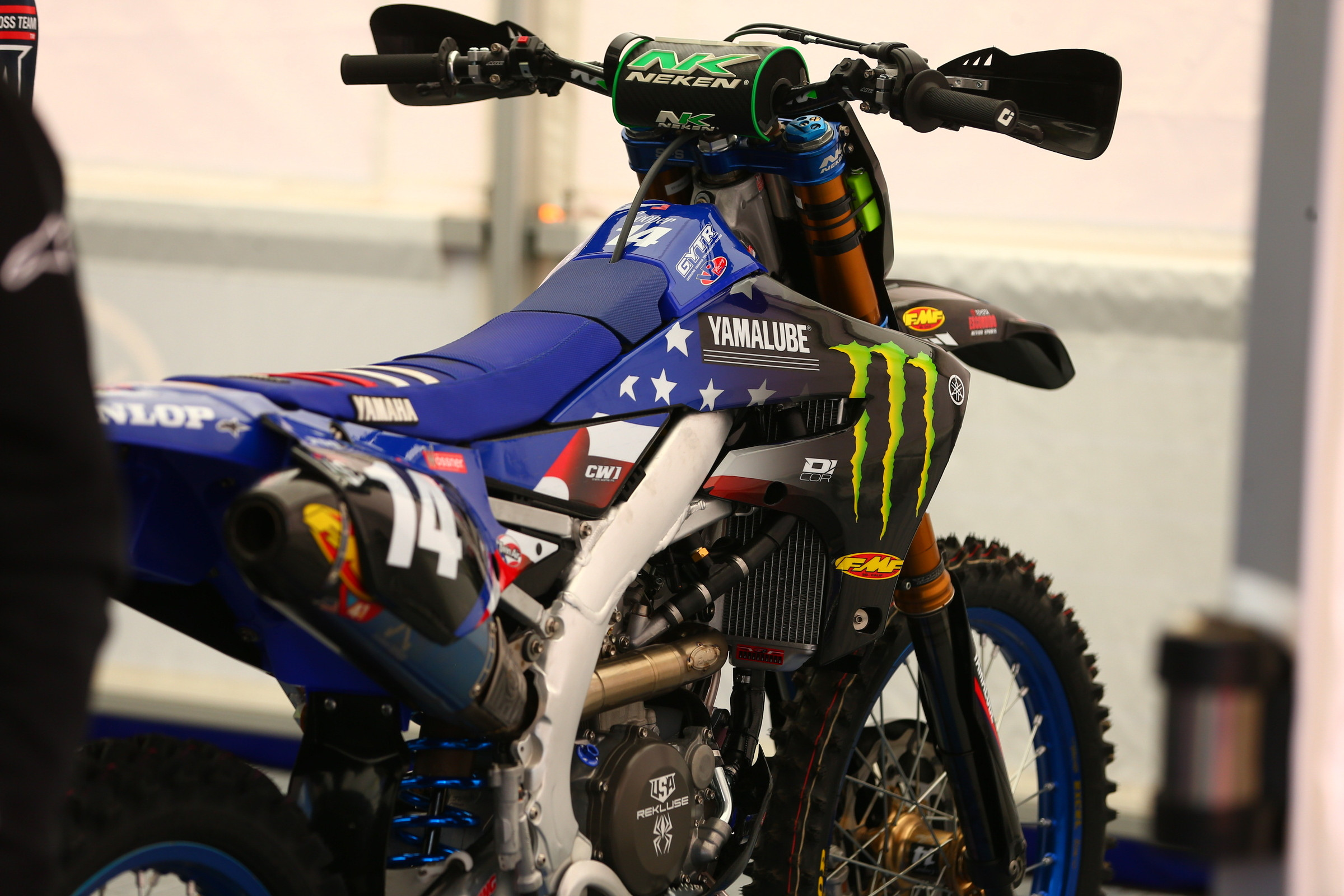 In yet another casualty of 2020, the Monster Energy FIM Motocross of Nations did not take place last year—the first year without the event since it started back in 1947. Motocross of Nations is scheduled to return in 2021, on September 26 in Italy. The annual “Who will race for Team USA?” quest is on, but with an interesting twist: this year, the MXoN race date lines up better for AMA-based racers than those racing in the FIM Motocross World Championship (MXGP). With the pandemic pushing the Grand Prix calendar all the way into December, the GP regulars now face the prospect, and risk, of racing the MXoN before their points-paying season ends. In the meantime, the pandemic pushed the AMA calendar back slightly, which means the usual five-week gap between the end of the Lucas Oil AMA Pro Motocross Championship and the MXoN is reduced to just one weekend. There have been many reasons (and excuses) to why some American riders don’t compete in the ‘Nations, but the schedule has been the one cited most often, recently. At least this year, that problem is solved.

Meanwhile, there are some very difficult decisions to be made for Grand Prix teams. Rumor has it that MXGP organizer Infront Moto Racing is thinking about some sort of GP-points paying structure at the Nations, to provide incentive for GP racers to compete. We here are Racer X have brainstormed every possible points-paying idea possible, and we can’t figure out a logical way to do it at the ‘Nations. We shall see what happens on the GP front—which riders will risk a title racing the MXoN with several rounds to go?

As far as finding riders for Team USA there are still obstacles, but this year probably ranks in the middle of the difficulty scale. We’ve seen stickier situations, that’s for sure.

Let’s run through what we know:

The first factor is how many AMA race wins are podiums are being gobbled up by non-American riders. Strike the Lawrence brothers, Dylan Ferrandis, Ken Roczen, and more from consideration.

Next comes Monster Energy/Star Yamaha Racing. Star has supported the event heavily in the past with riders like Jeremy and Alex Martin, Cooper Webb, Justin Cooper, and even Dylan Ferrandis riding for Team France. Team owner Bobby Regan and factory Yamaha in general have never shied away from the MXoN. However, we’ve heard Star Racing might have to take this year off because this off-season will be dedicated to building a new race shop in Florida, at the GOAT Farm. There’s a lot of stuff to move from California to Florida, and this team would like to use September to do it. This would leave Justin Cooper, for example, off the team, and Ferrandis off of Team France. Jeremy Martin needs off-season surgery on his wrist, so he would likely be out, anyway. As for Aaron Plessinger…more on him later.

Either way, if Star can’t go (which is what we’re hearing, but it is not confirmed) it changes the game a bit.

Next, we have team Monster Energy Kawasaki, which has kept its riders from this event quite a bit in recent memory. Sans Eli Tomac racing MXoN at RedBud in 2018, we haven’t seen a KX450 rider on Team USA since Ryan Villopoto in 2011. For reals. Kawasaki doesn’t really have eligible participants, anyway. Adam Cianciarulo is out after arm surgery, and (you might have heard) that Tomac is moving on…to the Monster Energy/Star Yamaha Racing squad that might not be able to participate this year. Tomac making his Yamaha debut at the event would be a dream scenario. That dream seems unlikely to come true. Even if Star decided to go race, would Eli really make his debut on a new bike and team just 14 days after his last race on a Kawasaki?

The good news is that Honda HRC is on board with the event, and the Austrian brands of the KTM group (KTM, Husqvarna, GasGas) always support it. That leaves plenty of talent. The list would start with Justin Barcia, currently fourth in 450 Class points (second American behind Tomac) and a Team USA veteran. Barcia rides well under pressure and hence has always performed well at this event.

“Yeah, Motocross of Nations,” said Barcia on last Monday’s PulpMX show. “There has definitely been some chatter and some rumors and things like that, nothing down on pen and paper yet. For me, I’ve always represented hard for the USA, and we’ll see what happens.”

Consider that a sign that Barcia and his Troy Lee Designs/Red Bull/GasGas Factory Racing team is already making plans.

Honda’s Chase Sexton is on the come up based on his overall win at Washougal. Honda will provide support and Sexton wants to race.

“One hundred percent. I would love to go,” said Sexton in the press conference after Washougal. “I was a little bit nervous there because I knew I was on the list to get picked to go, but there were a few rounds there where I was riding around in eighth and it wasn’t looking good for me to get picked. I hope this weekend I get put to the top of the list. I would love to go. It would be an honor to represent my country. I really want to go race the MXGP guys. That would be fun as well. To answer your question, I’m 100 percent in it if I get picked.”

Barcia and Sexton make for a good 450 lineup. The strangest thing is that the current Monster Energy AMA Supercross Champion, who also has experience at this event, has said he’s willing to go. Plus, he rides a KTM, so his team would be in for certain. But Cooper Webb…hasn’t been as good as Barcia and Sexton in motocross this year.

“I don’t know what’s happening with the des Nations, but I would definitely be down,” said Webb to Swap Moto Live at Washougal. “There are some other 450 guys right now who would be more deserving, but we’ll see. If the opportunity arises, I would love to do it.”

If you had told people in May that Cooper Webb wanted to ride for Team USA, would anyone have said they don’t see him making the team simply because his results don’t merit it? Strange summer, there.

A few weeks ago, Aaron Plessinger was third in 450 points, which made him the top American. Plessinger loves the event and would go, but he will (likely, ahem) be in the middle of a team switch to Red Bull KTM for 2022. Riders don’t usually make debuts on a new bike this soon. If Plessinger were to stay at Star, we know they’re probably not going.

Just as a tip of the visor for his previous efforts, we know Zach Osborne would love to race the event. His back won’t let him.

Now onto the 250 class. If Justin Cooper and Jeremy Martin can’t race, the next American in points is RJ Hampshire of Rockstar Energy Husqvarna, a team that always supports the event.

“No, I haven’t heard anything yet. I’d love to,” said Hampshire after Washougal. “That’s what you kind of dream of. We were actually just talking about it today. I wish I could earn it.”

Hampshire’s 250 season has had its ups and downs, but with Cooper and Martin not able to go, he’s the easy pick if you’re just scanning the 250 results. However, let’s throw another wild scenario in here. Cooper Webb says he’s willing to go. What if he rode the 250? Webb has experience in the event and has as much experience as anyone in big-pressure situations. Way back in the day, Team USA would often throw premier-class riders onto a 125 at the event, such as that legendary Johnny O’Mara run on 125 in 1986. Or Bob Hannah on a 125 the next year, or Jeff Ward in 1988. They all rode well. Seems that concept has stopped, however. Team USA has had a big problem generating results from the MX2 class at this event recently. Since 2009, only twice has an American rider scored a top-three moto finish on a 250F, Eli Tomac in 2013, and Zach Osborne in 2017. The last time an American won the MX2 class overall at the event was Ryan Villopoto in 2008.

Maybe throw a Hail Mary and put a gamer like Webb on the 250?

So, there you have it. At this time, Barcia, Sexton, and Hampshire seem like the most likely Team USA candidates. They’re ready, willing and able. They also have to stay healthy and ready for another month and a half. If that doesn’t happen, you have the 450 supercross champion in the wings. Or maybe Star Racing decides to participate? Team USA has had worse situations than this.