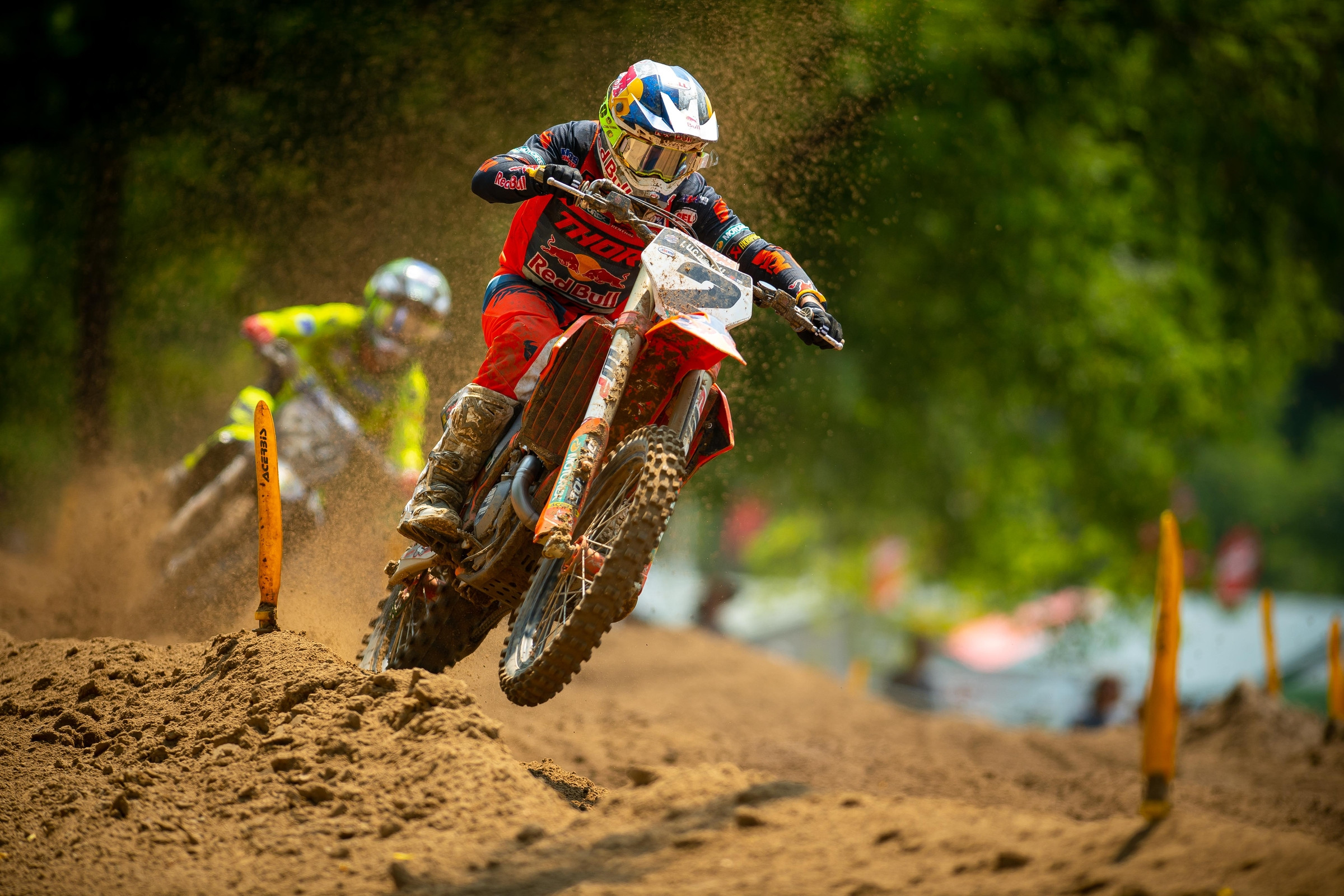 We spoke to several podium riders and title front-runners from the Spring Creek National already this week. Here’s what other riders from throughout the pack had to say about their day in Minnesota.

“This weekend went pretty well. I had to fight my way from the back of the field in Moto 1, but I had the back sand section dialed and made up a lot of time in that part of the track, which helped a lot. I made my way up to third in that moto but spent all my energy at that point and couldn’t catch the front two riders. I had a little better position off the start in Moto 2, but I no longer had the advantage in the back since I couldn’t make it over the wall. I still managed to work my way up to fourth in the race and tried to put on a charge for third. The team and I plan to work on starts this week, so I can put on a battle for the lead without having to use too much energy."

“It was not the best day for me at Millville. I didn’t have a good feeling in practice. Then in the first moto, I got a good start and was fighting for the win but couldn’t find a way to pass (Justin) Barcia and finished second. In Moto 2, I got a bad start and then crashed after the downhill on the first lap and had another crash on Lap 2. I had to dig deep to come back to fifth and managed to finish third overall. It was a good day for the points, but I’m not really happy with myself. We’re going to get back to training next week to be ready for Washougal.”

“I had a pretty good day at Millville and was able to ride more like myself and be toward the front. I had some good battles in both motos to come away with fifth overall. I’m excited to keep this momentum going for Washougal!”

“I struggled quite a bit today. My starts weren’t there, and I couldn’t push as long as I wanted to. I had a crash with Dylan in the second one and just did what I could to salvage ninth. The track was not the Millville that I’m used to; it wasn’t deep at all, and it was pretty slick. We’re going to go back to work and get back at it at Washougal.”

"I had a good second practice with a better feeling on the bike, which was nice, but both of my starts were no good. My jump was okay but I was never able to get it done in the first lap. It made it really hard on me to come back and I finished two times in eighth place. It’s not what I want but it’s a better feeling and I need to keep building the physical part and push through it even more.”

"Today was one of my better days. I do wish I was a little healthier to give it a little bit more but 10th was the best I had today. My starts were good but I just need to try and get better and get my health better as well but we’ll take it and just try to keep getting better.”

"Here at Millville we did well. I think we made some progress. I'm happy with my performance today. In the second moto I was riding well, and I actually tipped over, then I came back to 11th, which was okay. We've been searching, we've made a few steps, and we're definitely on the right track and closer to being in that race [at the front]. We're looking forward to Washougal next week and we're going to give it to 'em there."

"It was a solid day. In Moto 1 we had an issue and missed the gate drop. The race started, and we took off about 20 seconds later. I came from literally last to 14th, so I was very happy with that ride. In Moto 2 I had a great start, I think I was sixth. It was great battling up front with those guys. About ten minutes in I had a problem, let some guys by, and dropped back to about 13th. I ended up passing for 12th with two laps to go. I feel like I'm riding really well so we'll just take the positives and keep moving forward."

“It was an up-and-down day for me. I ran up front for a bit in Moto 1 but I kind of lost some ground early on. I made a real charge at the end to almost get Plessinger for fifth, so I was pumped on that. Second moto, I was trying to get into third to hopefully set myself up for an overall podium but I had an incident with another rider and I ended up crashing pretty bad. It took me a while to get up and I’m glad I’m okay, just a little sore, but the bike was super bent up so I wasn’t able to finish.”

“I had a really positive weekend going early in Moto 1. I was sitting in second and battling for the lead before my crash. After the accident, I noticed there was something wrong and I had to pull off. Unfortunately, I couldn’t line up for Moto 2. I never like ending my weekend early, but we’re looking at the bigger picture.”

"I think this weekend went okay. I went out for the second qualifying session and set the sixth-fastest lap, which was solid. It proves I have the speed to be up near the front. All I need now is to be more consistent with my starts. Overall, we finished seventh with 8-9 moto scores. It’s a good result, but I know I can do better. The team and I will regroup this week and come back ready for Washougal.”

“I didn’t get the best start in Moto 1 and made some small mistakes which made for a tough race. In Moto 2 I got off to a much better start and ran with the top three riders for the first lap. Racing with those guys up front forced me to pick up my pace as well, and around the 10-minute mark, I really started to find my flow, which helped me fight off pressure from riders behind me. It felt great being up near the front again. I know that’s where I belong, and the second moto proved that. I’m pumped on the performance today and will carry this momentum into next week.”

“Today was not so good compared to how the rest of the season was going, I’m battling some old injuries right now. We’re going to use this week for some fuel and try to come back firing at Washougal.”

“Today went pretty good. I qualified P8, which was my best qualifying position so far this year, and it gave me a good spot on the gate. I ended up starting second in the first moto and was running up front for the majority of the moto but I made some mistakes and went back to ninth. Second moto, I had the opposite start and worked my way up to 13th. I’m looking forward to Washougal.”

"Today was a step in the right direction. The past few weekends have been rough, but we are starting to turn it around. We just have to keep improving and gaining experience. I really enjoyed this track and had fun today and am looking forward to next weekend!"

“Honestly, I felt pretty good on the bike today and I felt like we were in a lot more control. I didn’t get a great start first moto but I felt pretty solid. Second moto, I got a little bit better of a start and made some quick passes but I was just in the wrong place at the wrong time. We’ll go to work this week and be better at Washougal.”

“I had a better day going at Millville. I qualified 11th and then had a good start in Moto 1 and finished 10th. In the second moto, I got caught in that pileup and that was it for the day. I’m taking the positives from the day and moving on to Washougal.”

“First moto, I got a pretty good start and honestly just didn’t ride all that well. I got a pretty good start in Moto 2 and was running seventh and I ended up getting caught up in the pileup with RJ. I got a little banged up but I went back out and was coming forward, passing for 20th, and tipped over and another rider didn’t see me and just ran straight over me. I got some bumps and bruises but we’ll be all right and we’ll get ready and healthy for Washougal and come out swinging.”

"It was a tough day all-around, not what I was looking for but I live to fight another day. In the second moto, I was up front and moving forward a couple laps in and I collided with RJ Hampshire and as I was going to get my bike, I got hit by a couple riders. That was scary – my legs went flying behind my back and I hit my head. I wasn’t really sure how I was physically, so the Alpinestars Medics took me to the rig and went over everything to make sure I’m okay and unfortunately, that was the end of my day. Health-wise, I’m a little banged up but all good to go, so that’s one positive to take from the day and we are hoping to rebound in Washougal.”

“I was stoked to be back on the gate for the hometown race last weekend. Unfortunately an electrical issue kept us out of the first moto and 2nd moto had to come from dead last after a small tip over. On to Washougal!"

“I’m just so bummed. I got a great start but had some more bad luck and I hurt my shoulder. We’re going to keep our head high and go get looked at when we get home and hopefully will be back stronger than ever.”