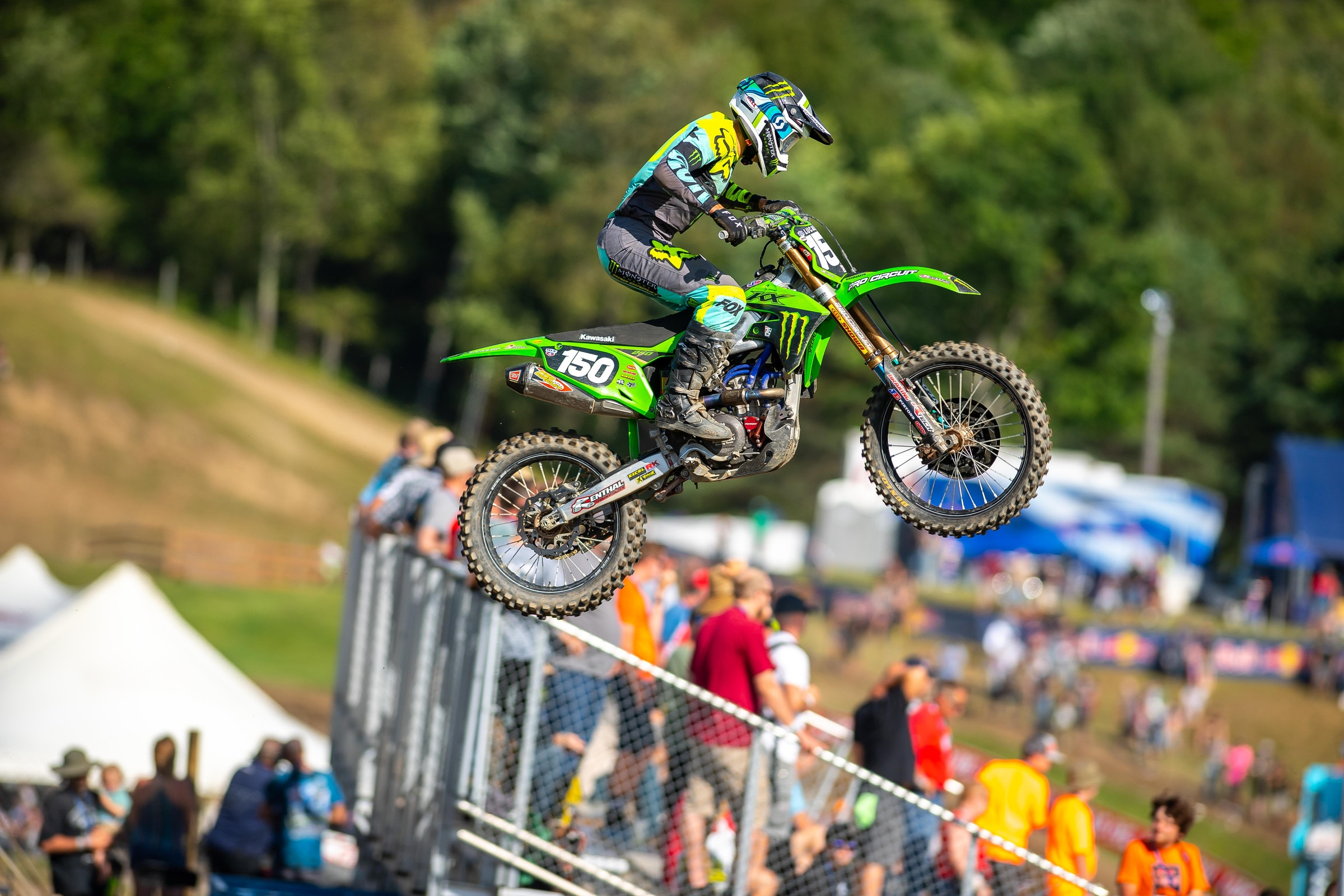 The Unadilla National marked the second Lucas Oil AMA Pro Motocross Championship event ever for both Levi Kitchen and Seth Hammaker, but their stories are very different. As it turned out, though, they hooked up in a battle in moto two, fighting for a top five.

Kitchen made his pro debut at the RedBud National in July before returning to Florida to prepare a run at the Monster Energy AMA Amateur National Motocross Championship at Loretta Lynn’s Ranch. He executed that final run at the Ranch as planned, claiming both the 250 Pro Sport and the Open Pro Sport—and the 2021 Nicky Hayden AMA Motocross Horizon Award as well—before turning pro full-time. He finished 12th in the first moto and passed into sixth when a mistake from Hammaker gifted him fifth. He lost two positions before the checkered flag but accomplished his first top-ten finish with eighth overall.

Hammaker was an A level amateur who might have been racing as a pro two years ago. He ran into injury issues in the last few years, as an injury kept him from the Ranch in 2019 and illness did so again in 2020. Finally, he made the jump to the pros during the Monster Energy AMA Supercross Championship this February. He picked up one main event win in nine starts but after the first round of Pro Motocross, the Pennsylvania native announced on Instagram he would miss some time to focus on getting back to 100 percent health. In 2020, Hammaker was sidelined for Loretta Lynn’s because of the Epstein-Barr Virus, but his health issues this year have not been specified by him nor the team.

Recovered, Seth returned at Unadilla for his second Pro Motocross race. He qualified third overall, finished ninth in the first moto, and was running inside the top five (battling with Kitchen) until late in the second moto when a crash cost him. Remounting with a broken clutch lever after a big crash, Hammaker struggled to get going again but would eventually finish the moto. His 9-21 for 17th overall does not look good in the results column but the #150 was happy with his riding, saying he believes without mistakes he can be inside the top five. Read what the duo had to say following a day in New York.

Racer X: Take us through your day, how did everything go today?
Levi Kitchen: It was good, besides this morning. For me not knowing this track at all, qualifying was absolutely terrible. I was 20th or something. I was a little disappointed with myself for sure. I just tried to keep my mind right and know that I can be up there. And then first moto, I got a terrible start, worked up to 12th. I was happy with that but if I got a start, I knew I could run up with the top ten. Second moto I came around pretty good. and then there for a while I think I passed up into fifth, me and [Max] Vohland were going at it. He ended up getting me back and [Austin] Forkner got me with about a lap to go, I made a pretty bad mistake down in Screw-U or whatever. [Laughs] But yeah, all in all, it was a pretty solid weekend.

Were you able to get all of the nerves out at RedBud or were you still nervous coming into this weekend?
Well, I slept about two more hours last night compared to RedBud. And I ate a lot more food this morning, which was good. [Laughs] So yeah. I mean RedBud, first moto was strong, and I was done for the second one, even [waiting] on the line. And this one, first moto was solid second one I had a good 20-25 minutes in that one. So now it’s just build from here, really.

You talked about goals and wanting to set and reach them and then set new ones. You wanted to top ten a moto a RedBud, you did that. Then you had Loretta Lynn’s and your real “start.” You wanted to top ten overall; you did that today. What is your next goal before the end of the season?
Um yeah, so my first goal was to top ten [overall]. And I think I ended up eighth overall, so I’m stoked with that. Honestly now, I’d just say top five [overall] and then after that, a podium would be awesome. We still got four left; I feel like I can learn a lot with four left.

You mentioned the mistake in the second moto that cost you two positions?
Yeah, and me and Vohland got together with, I don’t know, probably ten minutes to go. And I don’t know how we saved it to be honest. So that spiked my heartrate. And then I was pretty shook after that.

Anything else to add?
See you at Budds Creek.

Racer X: Take us through your day, how was the return today?
Seth Hammaker: Today was pretty good. Started off great in qualifying. Qualified P3. Felt pretty good on the track going into the motos. First moto, got myself off to a pretty good start. Was in the top five off the start. Felt good during the moto. Had a little tip over about a little over halfway and then got back up and lost a few positions from that and ended up ninth in moto one. Moto two was going better. I got a better start, I felt really good in that top five. I was running fifth and then about the 20-minute mark I had a pretty good wreck. Busted my clutch lever off, so it took me a while to get going. Got it going and then tried to just finish as best as I could. I’m not really sure what I ended up, but regardless I’m happy with how my riding was. The results, they’ll come but, yeah, I’m pretty happy for the day.

You missed seven races and were inside the top ten in both motos at some point. Did you expect that right away, even though you slipped back in the results because of mistakes?
Results wise, it’s not where I want to be, but I know I can run up front, like my speed I’m happy with and my endurance is a lot better now. So, I feel good in that, that’s like the positives taken from it. So yeah, if I can limit some mistakes, I’ll be good.

That had to give you confidence that you were running in the top five in your return to racing.
Yeah, and those top four they had a good pace. Those first few laps I was running it pretty good but yeah, that pace will come just with time racing. It’s only my second outdoor [race] so we’ll take it.

What goals do have you for the remaining races as you look to finish out the season strong?
For the rest of the season, I would say just try to be in that top five every moto, be consistent, and just learn every round.