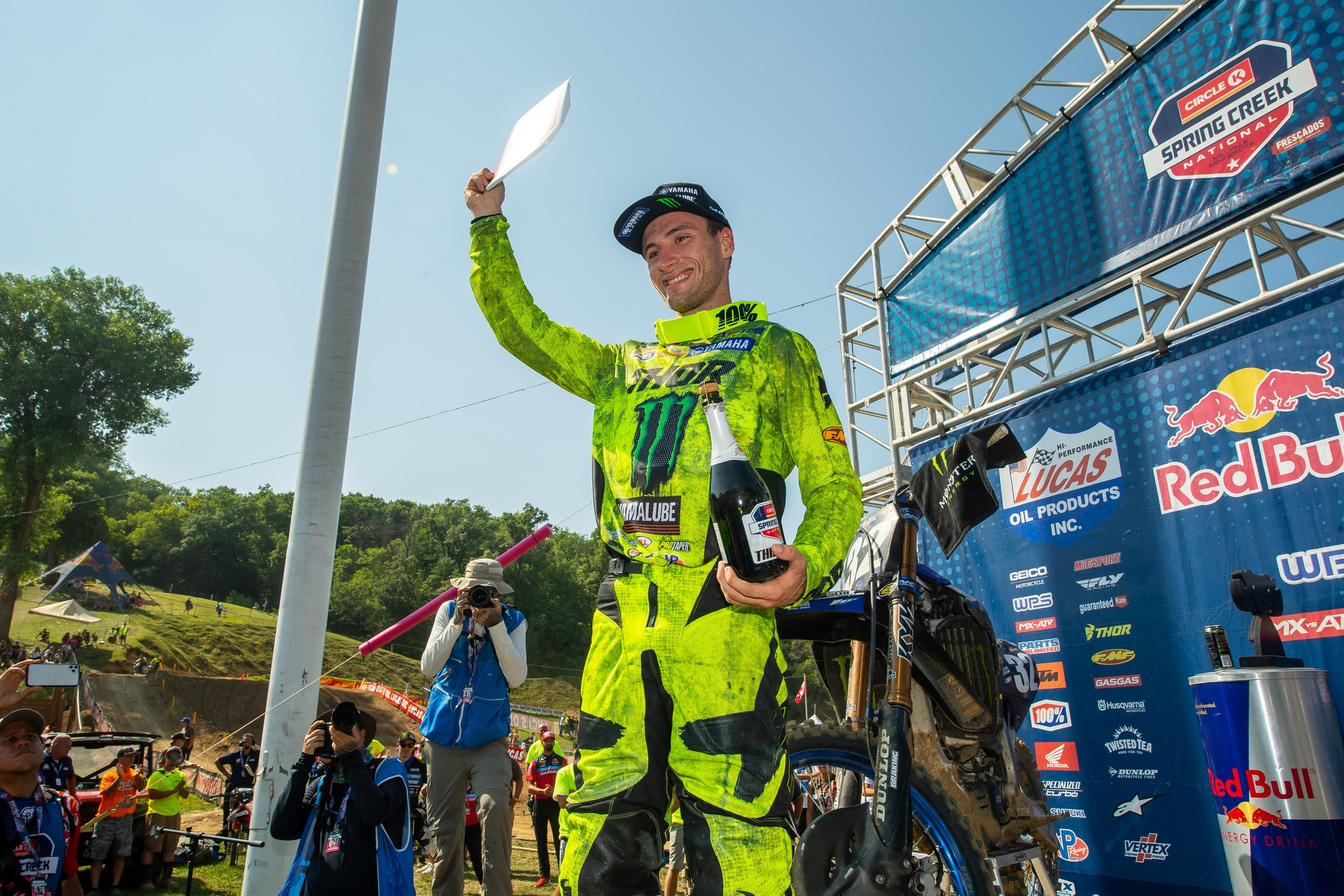 While Jeremy Martin was enjoying the spoils this week, his Monster Energy/Star Racing Yamaha teammate Justin Cooper was taking over the points lead. Cooper had a shot to win both motos but Martin and Michael Mosiman bettered him on the day. He wasn’t thrilled with his performance despite taking the red plate. Here’s what he had to say in the post-race press conference.

You said it yourself on the broadcast and on the podium that you didn’t think you rode your best today, but you still ended up on the podium. You now hold the red plate. How are you feeling with that podium result? How are you feeling now with the position of the red plate?
Obviously it’s great to have the red plate. It’s what we focus on. Overall, I’m really happy on the day. Not happy with my riding really, but there’s always stuff to work on. That’s part of the challenge to be better every weekend and admit to what you’re not doing right. It’s a chance to grow going into the next weekend. So, that’s still going to be the plan. Obviously, do the best we can every time out. Being in this position, you really have to know that and expect it out of yourself. That’s the goal, for sure.

Can you talk a little bit about a few weeks ago you said you were going back to the track to work on some weaknesses.
I don't know if I’ll say my weaknesses on here, but being on the podium is great every weekend but it’s kind of frustrating at the same point because we’re trying to win the championship and I’ve only won one race. We’ve had six different winners. The class is definitely tough. It’s definitely thick. So, it’s really important to be up front every moto. I feel like I’ve done a good job with that. The times I’ve been behind I’ve done what I could. Everyone has their weaknesses. I just have a couple that I feel like I can do things a little bit better out there. That’s kind of just going against my style too because I’ve had these habits for a while and it’s hard to just go out and change stuff like that on the spot. Like I said, being on the podium every weekend is great, but we don’t want to be on the second and third step. We want to be on the top step. It builds up that frustration. In order to win championships, you’ve got to go out and do that winning races sometimes. So, we’re working. We’re doing what we can. I feel like it’s all coming. We’re getting stronger and we’re getting better.

Justin, do you think about [Motocross of] Nations? Obviously, you’re focused on the championship, but does that ever come into your bandwidth or your mindset?
It’s in the back of my mind. Definitely need some redemption there considering my Sunday didn’t go too well after winning the qualifying race. The priority is winning this MX title first. You get to represent your country, but you don’t get much from that. The main focus is doing this MX title for myself. Something I really want and I’ve worked hard to get to this point and definitely want to keep the priority on that. I’m sure the whole Des Nations thing will come about at some point, but until then, just keep focusing on the task at hand. Definitely need some redemption there, so that will be cool to do that again.

Some of the words you used to describe today, mediocre, need a lot of improvements. This next week, what are some of the things you think that you need to work on leading into the next round next weekend to get back up to where you think is satisfactory?
I was just talking like, championship mindset. I think you have to expect a lot of yourself, and I expect myself to make a good push at this championship and I just hate leaving points on the table. I felt like I didn’t ride the best today, but all in all, I ended up getting some pretty bad arm pump in that first moto. That kind of did it for me there. But the second moto I felt like I just ran out of steam and I can’t really afford to do that. Just frustrated in that case. Going into this next week, it’s a different track. Everything is different. Just show up to race every time and do the best I can. Not really going to work on anything specific. It’s just showing up on race day and delivering. At some point it becomes kind of how bad you want it and I just feel like I didn’t give 100 percent all the way to the checkered flag today, so that’s just the only reason that I’d be frustrated with how today went.

We’ve seen six different riders take the win in the first six rounds of the season. This is a historic level of parity in this class. You’ve all been in the crux of it pretty much all year long. What is your opinion, what has been the difference-maker from one week to the next for any single one of you?
It’s obviously pretty hectic in the class right now and I don’t expect much to change. We have a lot of people trying to prove things to themselves and the teams. It’s good to see for the class. It’s good to see for the sport. I obviously don’t want it to be like that, but at the end of the day, everyone is giving their all. I feel like it’s going to stay that way because there are a lot of people that can win and if people are feeling themselves that day, you see it. You see guys step up on certain days. It’s good to see for the class. It’s hard to be consistent. That’s the main thing I’ve tried to focus on. I feel like maybe not taking control of the championship through race wins, it’s going to be through consistency, which I’ve done. Obviously, going for the best result I can every weekend, but I’ve been scoring pretty good points lately. So it’s going to I think continue to stay like this. I’m obviously going to try and change that, but it’s been tough. There’s a lot of people out there.

Meanwhile, bad starts continue to hurt Jett Lawrence’s points total. He got caught in some crashes at Southwick, and then it happened again at Millville, including a crazy crash in the second moto that left six riders on the ground. He ended up with 4-6 scores for fourth overall, and now Cooper has taken his red plate away for the first time this season.

Here’s what Jett had to say in Honda’s post-race PR.

"Millville was not the best round. I came in feeling really, really good--really excited for this round. First qualifying went well; I was second and battling for first. Going into the first moto, I felt confident but messed up my start really bad; I was focused on really wanting to get a good start and just focused too much on that one thing and then ended up messing it up, so I screwed myself there. I came all the way back to fourth and was really hoping I’d get a better start in the second one, and I did. I felt like I got everything good on my behalf, but not the greatest gate pick, but it is what it is. I was making my way through and then got into some carnage, and I ended up running into [Pierce] Brown. I didn't see him until the last minute and was like ‘Oh gosh,’ so I hit him. I feel bad for full-on hitting him, so hopefully he's not too hurt or can at least race next weekend. That set me back to 12th, but I made my way through. I kept on charging and made my way through to sixth. It wasn’t the best weekend, but we're going to go into Washougal with an open mind. We’re going to go back to some other settings that were better and really come out swinging and hopefully start getting on top of the box again to make sure the points leader doesn’t get too comfortable with the red plate.”