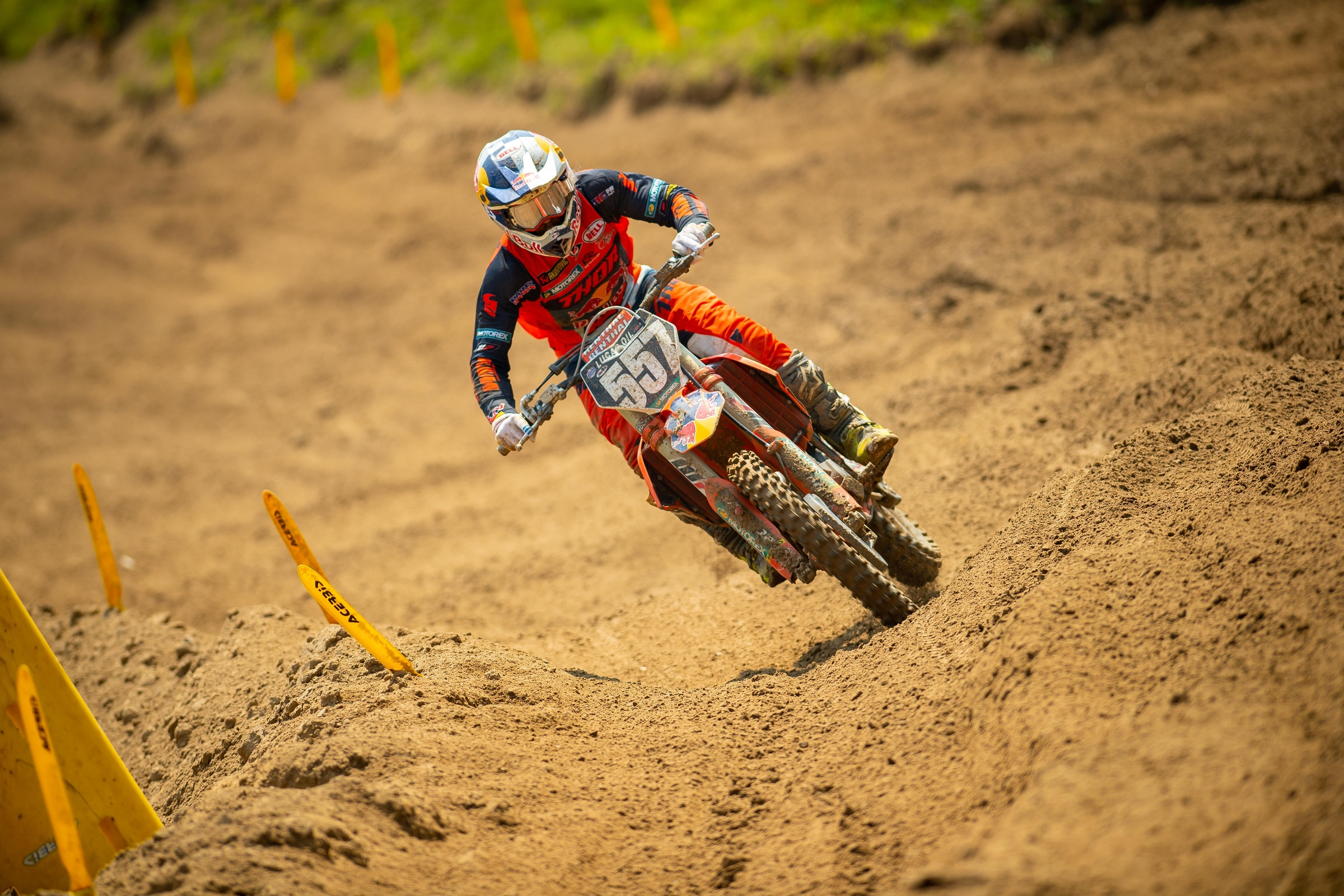 Kailub Russell, winner of eight-consecutive AMA Grand National Cross Country Championships as well as championships in AMA National Enduro, Full Gas Sprint Enduro, the International Six-Days Enduro and more, has called it a career. Russell was fulfilling a life-long dream this season by racing Lucas Oil Pro Motocross with the Red Bull KTM squad, but the races have been a struggle, and the injuries have been frequent. Instead of completing the second half of the season, Russell, who broke his jaw in a pre-season crash while testing, has announced that his professional racing days have come to a close.

“I just want to get out ahead of everything….and basically give my farewell speech to the motocross world, after my short time spent,” said Russell in a video he posted on Instagram. “This isn’t being forced upon me, it’s my ultimate end decision here. We were under the weather at Millville and we struggled big time, we struggled at a few. I had a couple of okay rides, but nothing to write home about and it was not where we want to be. I’ve had a tough year going. I broke my jaw at the beginning of the year.

“I’m just mentally checked out right now. I’ve been lying to myself. As a racer, almost every racer out there just lies to himself. Whether it’s, 'Oh I just need a start,' or 'If I could just get on a factory bike.' Whatever it is, they tell themselves, 'This is all I need to do it.'"

“I just…I don’t have it anymore,” Russell continued. “I’m not the same racer that I used to be or I once was. It’s just not there. The lights are on but nobody is home. I’ve been doing this for a long time. I’m really thankful for this opportunity, don’t get me wrong. It was awesome. But, we couldn’t make it happen. I don’t think I’m capable of being the same racer that I once was.”

Russell will retire as the all-time leader in GNCC bike race wins, and arguably the greatest American off-road racer ever. He’s the only rider to ever win the GNCC and National Enduro Championships in the same season, and he was a member of the first American World Trophy Team to ever win the ISDE. While he did not grow up racing motocross, his dream of racing the series full-time really kicked off during a one-off appearance at the Unadilla National in 2018. In muddy conditions, in which he has great experience, Russell ran third in the latter stages of the first 450 moto. He fell and finished sixth, then started up front again in moto two before getting tagged by Justin Barcia on the first lap. The crash resulted in a broken rear brake pedal. He later crashed out of the race. Since then, the motocross dream has stirred, and Russell announced the 2020 GNCC season would be his last. Prior to the 2021 season, he and Red Bull KTM announced he would transition to motocross, and the factory team would create a second 250 slot alongside Max Vohland for Russell.

Unfortunately, he suffered a big crash while testing in California, resulting in a broken jaw and an ankle injury. He returned to action for the High Point National, saying his goal was top 15 finishes early, and perhaps top 10 finishes later in the season. His indeed took 15th in his first moto at High Point, but most of his other races were not so smooth. His best overall was 18th at Southwick. In his final appearance at Millville, he was 28th in the first moto, and did not line up for moto two, saying he was under the weather.

“I didn’t have crazy high expectations for myself, but I think a lot of people had very unrealistic expectations, and that comes with all the success I had off-road. But it doesn’t translate,” he said.

“Mentally, I’m not defeated, but I thought I could come back and be that same racer I was a few years ago, but I’m just riding timid and scared. I’m just struggling every weekend and that’s not what the fans deserve to see of me or the team deserves to get out of me.

“It’s a tough go….but…the professional career has come to a close. Sorry boys.”

KTM has confirmed the news that Russell is stepping away from racing Pro Motocross. The full press release is below:

MURRIETA, California – Multi-time offroad champion, Kailub Russell, has announced his decision to step away from the AMA Pro Motocross Championship after four rounds of racing with the Red Bull KTM Factory Racing Team.

Fulfilling a lifelong dream of racing motocross, the recently retired eight-time GNCC National Champion enlisted with the Red Bull KTM Factory Racing Team in 2021 with plans to compete in the full 250MX series aboard the KTM 250 SX-F before suffering a broken jaw in a pre-season practice crash. Delaying his debut until Round 3, Russell came out strong with a season-best moto-finish of 15th at the High Point National and from there he fought through a host of challenges that ultimately brought him to the tough decision to step away.

With his head held high, the highly decorated and very versatile offroad champion is closing the next chapter in his professional racing career with yet another impressive accomplishment of racing alongside the best in the sport of AMA Pro Motocross. KTM North America, Inc. would like to congratulate Kailub on an incredible all-around racing career and thank him for more than a decade of thrilling race moments.

“This isn’t being forced upon me, it’s my ultimate decision here. I’m really thankful for this opportunity but I’ve had a tough year going – I broke my jaw at the beginning of the year and I just don’t have it anymore. Mentally, I’m not defeated but I thought I could come back and be that same racer I was a few years ago, but I’m just riding timid and scared. I’m just struggling every weekend and that’s not what the fans deserve to see of me or what the team deserves to get out of me. It’s a tough go, but the professional career has come to a close.”

“The entire Red Bull KTM Team has the utmost respect for Kailub and everything that he has accomplished throughout his successful offroad racing career. It’s unfortunate that he had a bit of a rough start to the motocross season but it’s been a pleasure to be able to give Kailub this opportunity to live out his childhood dream and race at the highest level of professional motocross in the U.S.”