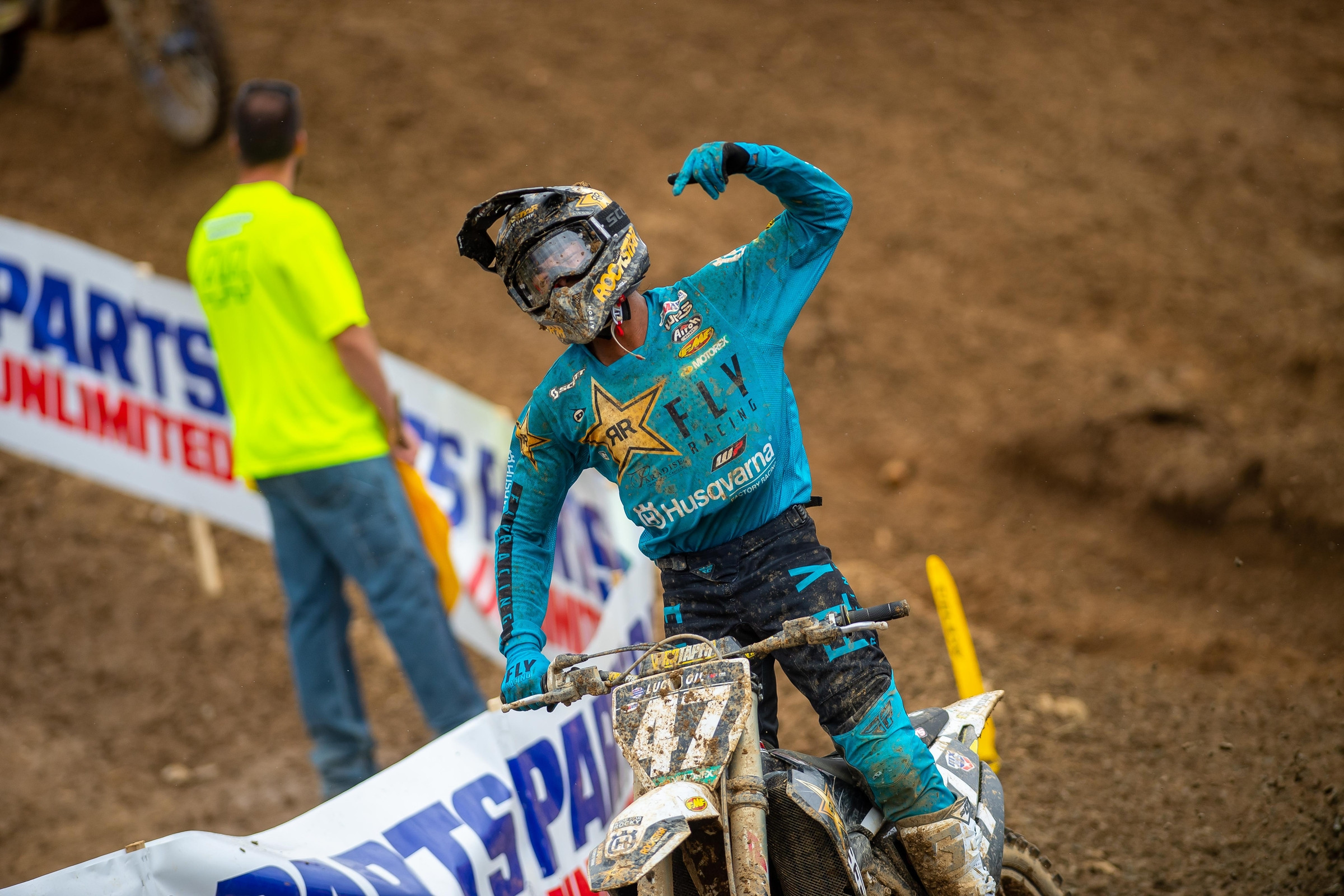 At the last round of Lucas Oil Pro Motocross at Thunder Valley, Jalek Swoll put together a career-best sixth in the second moto. He took seventh overall. We invited him on our Twisted Tea Best Post Race Show Ever after the race and he said he was slowly getting better, and never expected to provide a quick flash the moment he turned pro. He was going to keep building and improving.

Well, now we have the flash! From a career-best sixth in a moto at the last race, Jalek blasted all the way into the top spot at the GEICO High Point National! The Rockstar Energy Racing Husqvarna rider was fast immediately at High Point, making the move on Hunter Lawrence to grab the early lead in moto one, and then Lawrence went down. Later, Swoll’s teammate RJ Hampshire got around to take the lead, but then his chain derailed. Swoll, hanging tough for second, inherited the lead. From there, he held off early-season title favorites Colt Nichols, Justin Cooper and Jett Lawrence to snag the moto win.

In moto two, he fought hard the whole way, and his third was enough for a surprising career-first win. Jalek had never even finished a moto on the podium outdoors!

He spoke with the media after the race.

Jalek, the most obvious question ever: where did this come from? I know Thunder Valley was better, but it was a sixth in a moto. How did you go from that to winning?
Jalek Swoll: If I’m going to be quite honest with you, I don’t even know. I think today I just felt a lot better and meshed a lot better with the track. I never really felt comfortable on outdoor tracks and stuff like that, especially these pro nationals. They’re a lot different from what we were racing on in amateurs. I think today I just felt a little bit more at home and everything clicked.

Jalek, back in Daytona we saw some footage come out of you sort of talking a little bit about your family and about your father. Obviously, this weekend being Fathers’ Day getting your first win, that’s got to be a little bit more special to you.
Yeah. My family has gone through a lot of sacrifices, so just to win in general honestly means a lot. Just to repay everybody who has stuck with me and did they everything could to possibly get me here and stuff like that means a lot. So Fathers’ Day or not, I cherish all the moments and stuff that we went through to get here.

Jalek, during the broadcast the announcer’s were discussing in moto two whether you knew the points, where you were for the overall. Was there anything on your board? Was your team letting you know that you needed that position or not? Or did you just want it?
I actually had no idea what was going on. I didn’t see the pit board at all any moto. I was literally so focused. Even at the end of the moto I wasn’t even paying attention. I knew if I stayed in third that would be a good spot. I didn’t know it would be for a win, but I figured 1-3 would be good for a podium. So I just wanted to stay there. Then I had some pressure from [Garrett} Marchbanks towards the end. I was just comfortable on the track. Everything was working well and stuff like that. So I found a little bit of a gear and held off for third and got me an overall. I’m just thankful to be on the podium, to be honest with you.

Jalek, you mentioned the track there. Was there anything that you felt kind of lent to your strengths in terms of how the track was prepped? I know it was probably prepped a little different with the anticipation of the rain. Can you kind of just talk us through how the track was for you?
I knew the day was going to be good when I had pretty good times in qualifying. That’s my biggest issue is qualifying, and then I have a bad gate pick and that whole shebang. It was good. I’m usually even not that good in the ruts, so I don't know. Today was just one of those days where I just felt like I was just riding like myself. Like I said, everything clicked. I just finally got some good starts and was just able to see the front group. I think that was just one of the biggest things that was different from the first two races.

After you won the first moto and you’re going back to the hauler and you’re riding kind of the elation or the high of coming up and actually winning a moto for the first time, what is that hour like for you trying to ride that high but then still have to build up to it again for the second moto?
Like I’ve been saying all year, I’ve just been really focusing on just having fun and letting the results come. I honestly wasn’t too high on the [first moto] win. I was obviously pumped, first win and all that kind of stuff, but I know if my teammate [RJ Hampshire] didn’t have the issue that he had that I would have got second. So I wasn’t too stoked. I feel like I have the ability to go out and win a moto straight up, so I’ll celebrate one like that a lot more than I did the one today. Nonetheless, still happy. Just that we’re on the box. That’s all we shoot for.