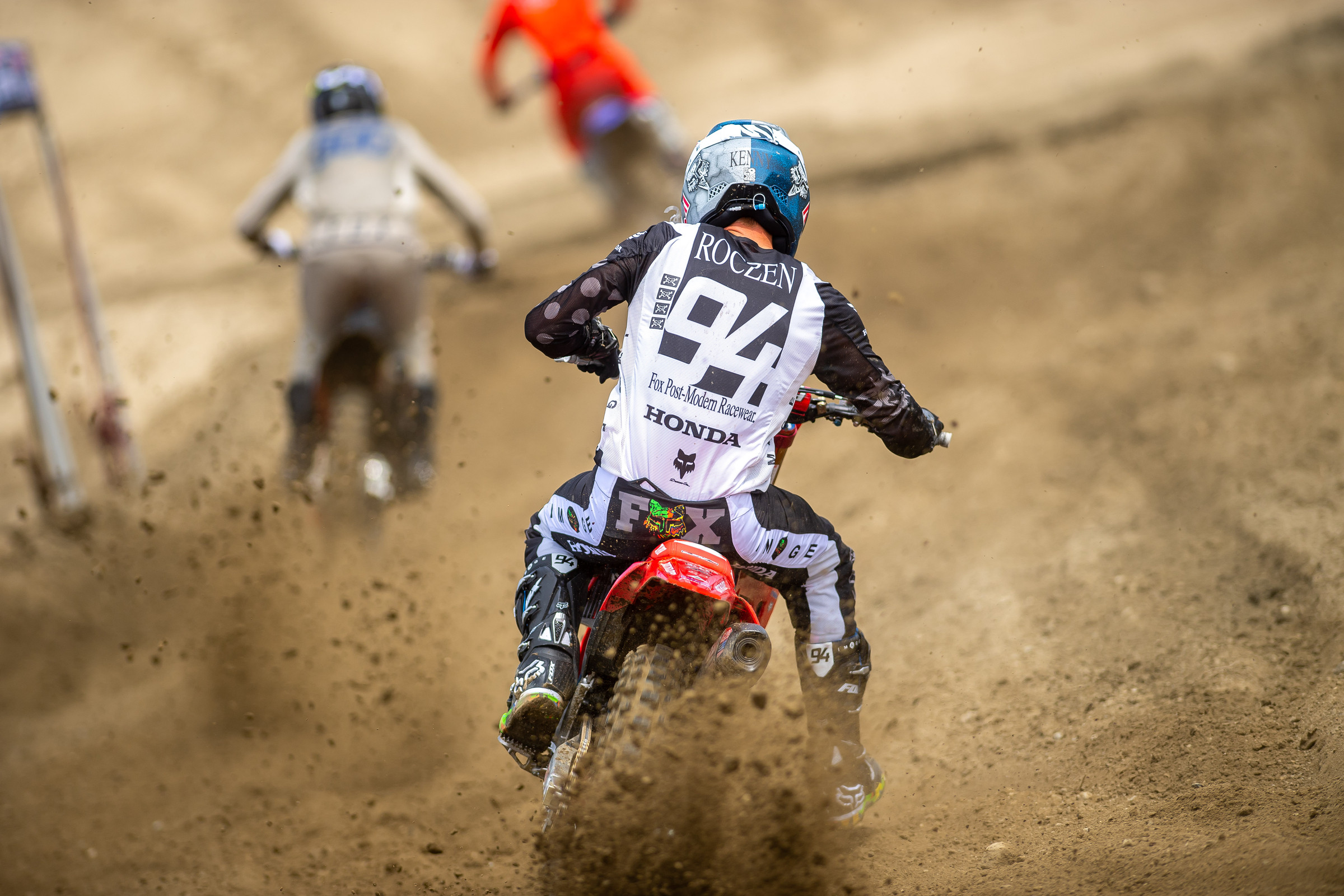 After sitting out all of the 2020 Lucas Oil AMA Pro Motocross Championship in order to fully recover mentally and physically from a hard-fought battle in Monster Energy AMA Supercross, Ken Roczen will be back to the Pro Motocross gates this summer. The two-time 450 Class Champion has finished inside the top three of the premier class every year he has raced but in the preseason Pro Motocross press conference yesterday said he had some “disconnect” when training for the championship. The Honda HRC rider will join the field on May 29 at the Fox Raceway 1 National. Here is what Roczen had to say in the virtual press conference.

Racer X: Ken, you’re back racing outdoors. Just take me through the thought process from last year having to skip and then this year coming back in.
Ken Roczen: It’s been a minute since I’ve ridden outdoors. Honestly, I’ve done this pretty much my whole life and that’s what I grew up on, but kind of felt a bit of a disconnect, to be honest. During the time last year when everybody was racing, I was forced to take it easy. It’s not like I was going out and pounding motos. I might as well would have raced. So I didn’t do that, and then we went straight back into supercross. So I just haven’t really ridden motocross for quite some time. Just been feeling a little bit of a disconnect with it. Trying to adjust to the speeds and whatnot and trying to keep my momentum up. As far as expectation for this upcoming weekend, I don’t really have any right now. To be honest, I kind of want to see where I’m at and then build each and every weekend from there on out. That’s really all I can say so far.

For those of us on the outside of your bubble, our thoughts about if you’re physically ready for the outdoor season with the heat. You’ve had some health issues in the last couple of years. How do you feel? Do you feel like you’re 100 percent, ready to go?
I wouldn’t say that I’m 100 percent just as in how good I have been in the past and how ready I have been. Obviously, I’ve mentioned that I feel like I have a little bit of a disconnect with motocross. Honestly, it’s really just the speed that it takes in motocross. It used to come super quick to me just because I used to race every outdoor season. Then I would ride it actually quite a bit in-between some of the rounds, but also being in the championship hunt in supercross I was just focusing on that pretty much the whole time. So back in the day I would definitely sneak in a lot more outdoor riding towards the end of the season, which I probably should have done this year too but it was the first time I’ve been in this situation. I kind of just stuck to supercross. Also, we have a new bike so trying to get some base settings figured out. We were pretty far off as soon as we jumped on the bike, so I also had to put in quite a bit of work there. I definitely tried to juggle with testing and also doing motos just because you can do as much training outside of riding as you want. There’s nothing like being on the bike and putting in your motos. I’ve done as much as I can in the last couple of weeks. Like I said, I just want to build every single weekend. It’s really difficult to say for me where I’m going to be at and how good I will feel throughout the motos, but I’m willing to put my head down and focus and learn every weekend. I know it’s not the ideal situation to be in, but at the same time I’ve got to take it the way it is right now. I’ve been in California pretty much the whole time since supercross, so it hasn’t really been too hot here. I’m sure that it will take some adjustment time going to some of the hot races, but I’m willing to do whatever it takes to get better and be on the podium and get some wins, hopefully. As far as right now, I cannot tell you where I’m going to be, where I’m going to line up. I have done a few starts on dirt as well. The last year and a half it’s pretty much just been on the grates in supercross. So everything will take some adjustment time, which it’s not an excuse by any means. I’m actually excited to be in this position and kind of see where everybody is at and be open-minded and learn from the riders that are maybe better at the moment than I am and hopefully apply that to myself and come back next weekend and be better. I just want to get better every single weekend.

Give us your thoughts on the season starting at Fox Raceway. How was Tuesday? How was the press day for you?
The press day, Tuesday, was interesting. Obviously we’re not used to doing a press day that early in the week. I didn’t mind it, especially since we’re all in California right now anyway. I think that was good. It was good to get a feel for the track. It’s pretty much almost the exact same layout. Obviously added some different obstacles, but they seem to have added quite a bit of sand on some parts of the track that was a little weird just because it was kind of dumped on top of it. With the moisture and how powder it was, some of the off-cambers it was pretty much one-lined. So those will be a couple of difficult sections. It will be interesting to see if they kind of start working it in a little bit and how the watering situation will end up being. We have seen in the past that Pala can get pretty dry and it was faster than it even was right now. But it was just nice to get some seat time with everybody on the track and get a feel for what a national track actually is really going to be like. Obviously when we go practice, the tracks just get a different rough and it’s a lot more hard pack and a lot different. Right now with the 250s and a lot of riders in the 450s out, it was good to get a feel on how rough the track gets and line choice and things like that. So it gave us a good idea on how it will be on Saturday, for sure.

Chase talked a bit about getting some settings from the guys in Europe and [Tim] Gajser and those guys. Can you talk a bit about that? Are you anywhere close to what those guys are running, or have you kind of gone your own direction?
Not really. As far as I know, I don't think we’ve had really that many settings from Europe because they run the BFR shock that we don’t run and we don’t really have here right now. So that’s obviously out the window. When it comes to other suspension settings, I feel like we kind of just went the direction that we thought and kind of based it on ourselves. I honestly would like to see a little bit more in the future to get some insight on what those guys are running over there, because obviously that’s their specialty and they ride those kind of tracks throughout the entire year and have so much time to actually prepare for motocross. But for right now, I just think we have a hard time running some of the same settings because we also can’t do some of the changes. I’m not 100 percent sure what they’re actually running over there, but I know they could do frame changes, I believe, if they wanted to and things like that. So I think we just kind of stuck to what the team knows. There’s so much to weed through. Obviously, we have Trey Canard that does some testing for us when it comes to parts and whatnot, but settings-wise… Everybody kind of likes the bike different too. Chase likes the bike completely different than I like. At the same time, we do still want to learn from each other. Obviously that’s the big plus point of having a teammate and both of us having the same suspension guy. But for right now, I was actually pretty happy with what we got settings-wise within a short period of time. Of course, it will be interesting to see in race conditions and race situations and moving forward going to different soil and stuff. I am focusing a little bit more on working on myself rather than on the bike and just looking for getting the bike better, because I feel like a rider can make up for a bike that’s not perfect. It’s really difficult to make a bike perfect in every type of condition.

Maybe some races in the supercross were frustrating for you, bad luck and something else. So how big is your motivation for the outdoors because we know how fast you are in the outdoors in the past? So is it maybe another motivation?
My motivation for outdoors is normally huge. I’ve always felt more comfortable on outdoors just because I’ve done it longer. But like I said, with the injuries in the past and me having to skip some years, and if you look at how long I’ve been with the team—it’s kind of sad to say, but I’ve pretty much only raced half of that time for the team. I think I will just get better with time. I’ve just invested a lot of time in supercross in the past years. It’ll be an adjustment and it will definitely take a learning curve, but I am pretty confident that things will come to me pretty decently quick within these next few weeks. Again, it’s muscle memory. It seems to usually always come a little bit more natural to me. So I'm definitely looking to speed things up. I don't know exactly where my speed is at at the moment. I’m sure I’m not quite on the level that I was in 2016, but at the same time, that’s in the past and things are a lot different now. I’m looking to rebuild the me in motocross and take it as a learning curve. But at the same time, they hired me to get a championship so I don't want to take myself out of it, by any means. So, we just want to make sure that we’re not too far off the pace and too far behind, and it will be just interesting to see. I’m just as curious as everybody else out there, whether that’s fans or media.