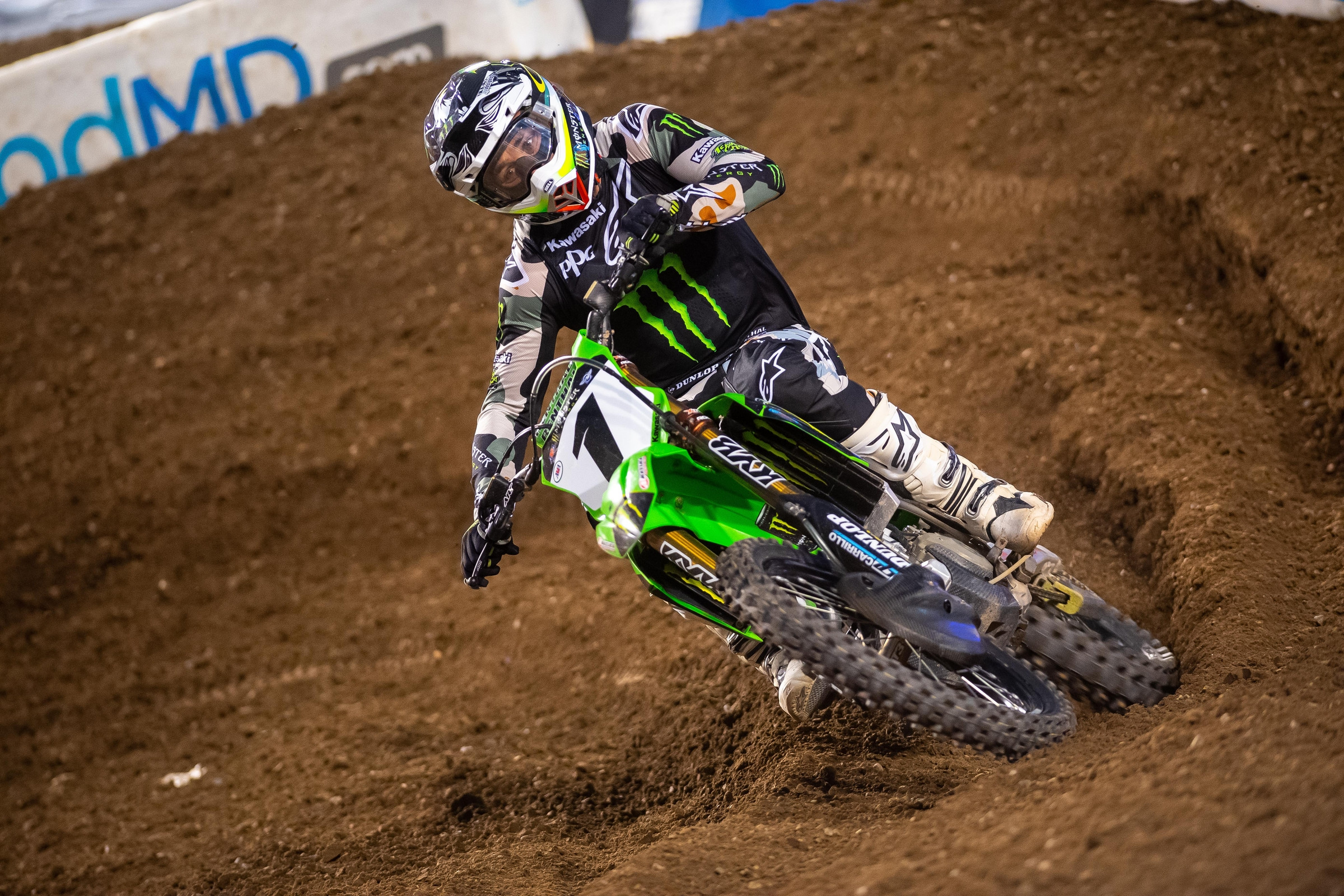 The Conversation Tomac On Outdoors and His Future

The 2021 Lucas Oil AMA Pro Motocross Championship is set to fire off at Fox Raceway over in sunny Pala, California, on Saturday afternoon, May 29. Eli Tomac, of the Monster Energy Kawasaki racing team, will be there on the starting gate, but this time he will be sporting his familiar career #3, instead of the #1 plate, which has also become quite customary for him. After a big run of three-straight 450 National Motocross Championships, Tomac placed third to new champion Zach Osborne and his teammate Adam Cianciarulo in 2020. Tomac, who to many is the fastest, most talented outdoor racer this nation has put forth in recent history, wants the title back in his possession and is rolling into the summer months on a mission. After another third in the 2021 Monster Energy AMA Supercross Championship behind Cooper Webb and Ken Roczen, the vanquished 2020 champion wants an AMA Pro Motocross title this year and is looking to the great outdoors to make it happen. And then there is the Yamaha variable we’ve all learned about in the 24 hours, with rumors circulating that Tomac might switch to a new team next year. Yes, while Tomac will contest the 450MX nationals on his familiar lime green Kawasaki KX450, 2022 now potentially appears to be an entirely different reality. So just what’s up? Enquiring minds want to know, and with that, we tracked Eli down.

Racer X: Okay Eli, the 2021 Monster Energy Supercross Championship is done and dusted for the year. Taking a step back now and reflecting on it all, what do you think? How do you feel about your supercross body of work?
Eli Tomac: Well, looking back now, we obviously want more and we didn’t end up with the number one plate. There were some good results in there and also there were some not-so-good weekends in there. The season was a little bit more up and down than I would have liked, but we never stopped fighting for what we could and I’m just thankful, once again, that we got those races in because it was still a modified schedule. I’d say the speedway races we went to were a lot of fun. That’s one thing I’ll look back on this series and be like, "That was pretty cool to be racing inside a new speedway for us." The [Atlanta] track was just a monster. That was one thing I will really remember about this season. I’ll remember that Atlanta track.

Exactly! I’ve been watching the Daytona Supercross most of my lifetime and have always loved the race. Having said that, and after watching you guys race those big and powerful 450cc motocross bikes in the Atlanta Motor Speedway races, I have to admit that I just absolutely loved all of it. I watched all three of the races on television and really thought it all looked majestic…
Yeah, it would be awesome if we had two or three of those in the mix, you know? I think it really brings some spice to the series, and man, they’re just cool. They’re monsters, you know? They’re really, really big tracks and almost like having two-in-one and you get a little mix of everything and there is speed in those rhythm sections. I had a blast racing them. I hope those tracks and races stay around.

Well, here’s another thing I wanted to ask you about. So you guys did the three Atlanta Motor Speedway races and then went straight to Rice-Eccles Stadium in Salt Lake City. Again, on those amazingly fast and powerful 450s, all of you guys were going so fast, albeit on very small and tight track laid out on a relatively small stadium floor. What a juxtaposition, huh?
Yeah, yeah, that’s the way it is. That’s supercross. Like you said, we’re getting the motorcycles to such a high level now that it’s almost like the 450s have outgrown the really tight stadiums if you want to say that. It’s amazing just what you’re capable of doing now on the motorcycle, like how far they can jump and just how much power they have and how good they’re actually getting. Like I said, I hope they keep those bigger tracks in the mix and I think most people enjoyed that style of track and that style of racing.

The thirteenth place finish you had at the season-opening race at Houston, did that put you back on your heels straightaway? You weren’t shy in the media about how much that race result threw you off and made you want to pull hair out of your head...
It did. Yeah, round one there was just a bad result, so that was a big hole. And then it was a quick rebound for me in the second race (Note: Tomac won Houston 2), but that first round, yeah, that was no good. I don’t know… I was off a little bit on the bike set-up and then unfortunately I paid the price for it. You’re always searching for more and then trying to find better things and sometimes it just doesn’t work out, you know, and you don’t know until you go racing.

Indianapolis III and the two following Orlando races were also a bit rough for you as you had to come back from slower starts and charge back toward the front to try and make it into the top five.
Yeah, yeah… I’m trying to think back. I almost think starts were even more critical this season and I wasn’t quite there in that elite pack early on in some of those races. The races I started more up front in, it was fine. If it was behind and I got off to a slower start, it was more difficult to go forward this year. I don’t know what to say or what to blame it on, but I think in the tighter stadiums I struggled getting to the front of the pack. That’s where with the bigger stadiums and the mire space I feel like it is easier to move around and make passes and to where starts are not so critical.

As you’ve been speaking about, it is harder to come through the pack now, isn’t it?
Yeah, a lot of it is weekend to weekend. Say if the track is easier, yes, the playing field is more level. There are certain situations where you can come through, I feel like. I still think it is possible, but the level of competition always goes up and I think even the fifth to the eight place guy, or even third to tenth. From there, it’s all getting up to an elevated level.

The Lucas Oil Pro Motocross Championship is set to start up over at Fox Raceway in Pala, California on May 29. Not too far away at all. I get the sense that the decks are clear and that Eli Tomac is going to come out charging to try and win that title. What do you think?
I hope so. That’s what I’m looking forward most to. I want to start off with a clean points slate and just move forward. With the nationals you’ve got the time to make things happen and you’re not in such a time crunch. Even though the starts are critical in all of the motos, you’ve got time to move forward. You’re eating a lot of dirt, but it’s just a different discipline, right? It’s a different physical effort. Supercross is a high heart rate effort and with motocross you’ve just got to be able to grind it out and be tough. I like that aspect of it with the motocross. It also looks like we’re going to be able to go with more of a normal schedule. It’s a little bit different than it normally is, but it’s mostly back to normal so I’m excited to get back to the rest of the normal races for the national series.

Yes, as you mentioned, the nationals schedule is definitely more traditional and standard with its dates, times and venues. In fact, it’s almost normalcy. Normalcy: there’s a great word. Something you’re looking forward to?
Yes. I miss that. At least at Salt Lake there was a decent crowd and it was just nice to have people back. That’s going to go on more as the year goes on, so yeah, I’m looking forward to normalcy. Once again, you don’t realize what you’ve got until it goes missing, so it’s cool to see people back.

You’re a three-time Lucas Oil Pro Motocross 450 Champion. What do you think? Can you win it again this summer?
Oh yeah. We are plenty capable of getting another win. There’s another championship and that’s the only thing we are shooting for at this point more than anything. We wouldn’t want anything less. The championship is in goal and like I said, we’ll be plenty capable of going after that.

You’ve been at this sport as a championship-winning factory rider for over a decade now. Are you going to go for a while? Are you taking it as it goes?
[Laughs] I do know the future holds another year for Eli Tomac. Yeah, I won’t be done this season by any means. You can count on Eli Tomac for at least Plus 1.

Okay, my man, I have to ask the question: is Eli Tomac going to race for Monster Energy Star Racing Yamaha in 2021?
I can’t really talk about that right now, so no comment.