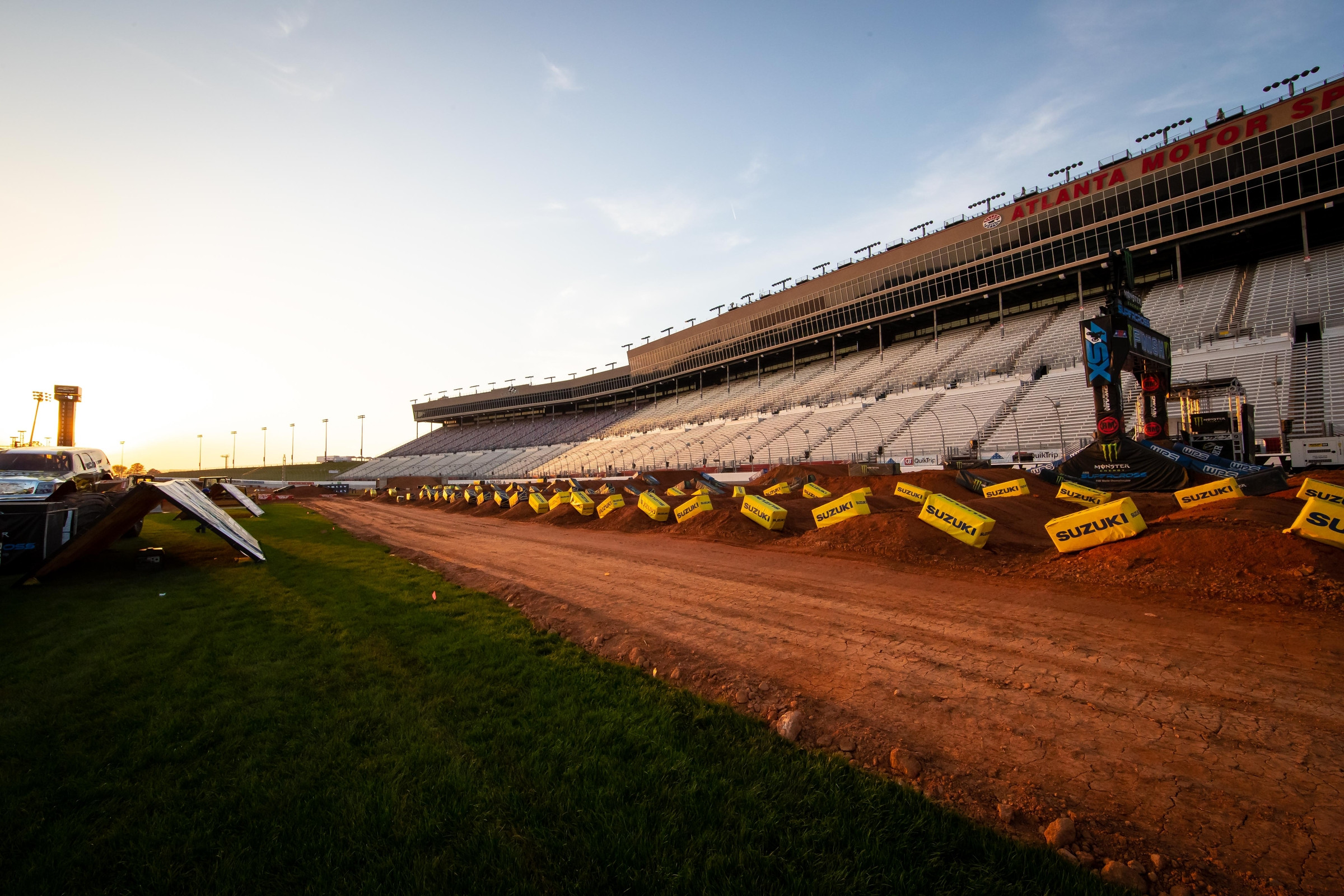 We were back at Atlanta Motor Speedway for the 14th round of Monster Energy AMA Supercross, and folks, and it was a good and unexpected event.

I still love the longer SX-style speedway track. It went backward for this round and it was busy. Had a bit of everything out there for the guys to deal with, and the temps were pretty hot, as well. The riders in the press conference mentioned how hot it was and Seth Hammaker even had to get treated right at the finish for heat exhaustion. Tougher race than you would think, right?

I don’t care about “vibe” and fireworks and all that. I’m not six years old I want to see great racing and if the speedway tracks can offer that, and I think this one has the last two races, then let’s do some more of these. Attendance wasn’t good, the speedway style places don’t offer the greatest amenities and all the Tuesday races haven’t sold a ton of tickets, but even still, a 42-second track that’s basic in a dome versus a speedway 1:40 track? Give me the speedway deal all the time!

Lots of hits and misses from ATL 2. Let’s get into it, yeah?

Just two days after being a miss at Atlanta 1, Roczen came out and looked like a different dude in taking the win. He credited having three practices to dial in the bike a bit more as a reason he was so much better and combined with Webb’s night, he got this thing down to 13 points with that ride. He took off with the win and on the harder packed track (Atlanta 3 is gonna be like Carlsbad ICYWW) he was amazing. Awesome ride for him and that had to feel good. First win in two months for the #94.

Coop scored a podium at the first round in a good ride. He hasn’t looked really comfortable out there through the two races and that third was hard earned. At Atlanta 2 he was second early on but just slowly dropped back. He wasn’t very good in the whoops and we’ve seen this before, like say Arlington 3, but usually he figures it out. Not this race though. He wasn’t helped with a Justin Barcia-induced fall late in the race, but it was weird to see Coop not have it. I’m VERY interested to see his response at Atlanta 3.

Chase Sexton rode another strong race to get another second. He didn’t have much for his teammate, but he sure did for everyone else. Great ride for him and with three races left, can he pull off a win? Can’t you see it at Salt Lake City 2 when everyone else is worried about the title, or just over the whole thing, and Chase takes the win?

Although he got beat by his teammate Nate Thrasher at Atlanta 1, Justin Cooper won Atlanta 2 with a great ride and pulled out his points lead with just two races to go. Shaky early on this series (after the opener of course), he looks to be back in control out there. Very good showing by him.

I feel like I was in early on a band named the “McAdoo’s,” like when they were playing clubs with 200 people in them and now, Cameron and the McAdoo’s are a huge hit. I mean, he was already good but this “hit” he made at Atlanta 2 was something else. We all saw it by now. It was so bad, and the fact that he was basically fine and ready to line up for the re-start was insane. He rode a great race to get on the box. Here’s the thing though—I met Cam years ago at the Straight Rhythm after he was a last minute entry for Team PulpMX (narrator: Team PulpMX did NOT ram their results up the factories’ asses that night BTW) and have grown to be friends with him. He’s a great dude and he rides with a ton of heart which leads to mistakes when his technique gets a bit off. That’s why we love him though. He lined up because he himself felt he could, and that was zero surprise to me. That’s who RAM IT is.

Having said that and not to crap on my buddy Cameron but there’s no way, in my opinion, that he should have been allowed to race. No rules were broken in letting him race of course but the fact that there’s no rule that stops the  rider who causes the race to be red flagged from rejoining the race is crazy to me. This has been something I’ve talked about for years. You can pop up and actually benefit from a crash. In a staggered restart, which happens if the race is red flagged a few laps in,  the rider can’t line back up. But if the race is red flagged early and they do a full restart? NO PROBLEM! We’ve seen it more than a few times over the years and maybe now the rule will change. Again, great for Cam and Kawi, but it makes no sense.

We saw what happened out there with Jason Anderson and Alex Ray. Poor Anderson who didn’t triple and ended up with a Kawi 450 on his back. That had to suck. A-Ray deserves most of the blame pie for this as he cross rutted onto Anderson, but also, if Jason jumps the triple that 100 percent of the riders in the night show did 95 percent of the time, nothing happens. He doesn’t deserve to get landed on, but yeah, mistakes happen in SX when you don’t jump the jumps people expect you to. Props to Anderson for apologizing on the podium to Alex for yelling at him. Sucks for both of the guys to have that happen but Anderson went from that to winning the LCQ to riding great in the main event to get a third. He’s really been good lately and plenty of rumors are out there about his 2021 plans as he’s the biggest name up for a new contract next year.

Carson Mumford hasn’t had a very good rookie SX season after a good MX season and it got worse with a crash and a shoulder injury that will keep him out for a while. Rough deal for Carson but maybe it’ll allow for a reset.

Loyal readers of the column will know that I’m always letting you people know when Kyle Chisholm chizzes all over the competition. Well, pour one out because the streak is over. Kyle crashed in practice and hurt his shoulder and couldn’t race. The streak is over.

Hunter Lawrence came from outside the top ten off the start all the way up to second by the end of the race. Great race for the Aussie and I would love to see what he could’ve done with a start. He was very good.

As in, Troy Lee Designs/Red Bull/GasGas Factory Racing team manager, Tyler Keefe, may want to miss Roger De Coster’s phone call this week. I have a feeling that RD will be calling Keefe just to remind him that KTM’s Cooper Webb is trying to win a title here and perhaps the red KTM rider Justin Barcia can be a little nicer with Webb when the #2 is around? It’s well known that KTM will use their other teams to help (if possible) and I would bet Roger will just remind Keefe to remind the #51 of this. I’m fine with everything Bam Bam did there to get by and hold off Webb but I would bet KTM is not.

You saw that super cool single over the bigger hump that Anderson, Webb, and Roczen were doing before the finish? It was a cool wall jump that took us back to the days of Stew. Well, in the 450C practice none other than privateer hero Josh Greco was doing it! First guy! He wasn’t doing it as clean as the big time factory dudes but he got it first! Shout out to Greco.

Stop me if you’ve heard this before. Dylan Ferrandis was fast but made a mistake that sort of ruined his race and what could have been.

Malcolm Stewart crashed early on and couldn’t finish the race. He’s had a bit of a rough run lately here in the series after opening up pretty strong. With no outdoors lined up, I’m sure Mookie would love to finish the series strong. We did confirm with a team source that his bizarre slowdown/get-a-breather move we’ve seen three or four times in the middle of a main is something that confuses them also.

Thanks for reading! Good times in the ATL and there’s one more to go. Yay for us, right? Email me at matthes@racerxonline.com if you want to chat about this race or something else.