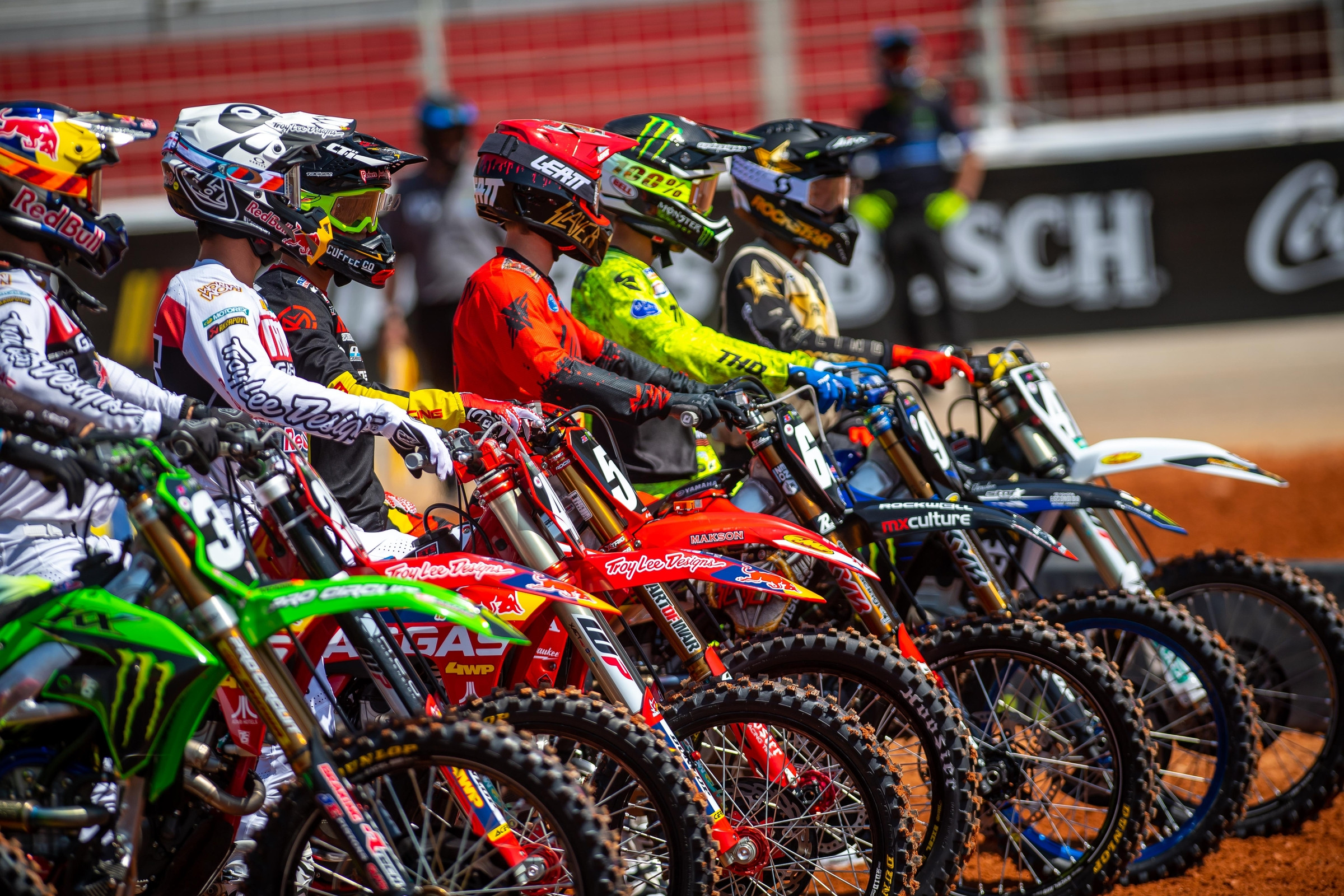 And then there were three. The final Atlanta residency round is on deck and the weather looks to be welcoming. After two rounds in the last few days, we should have a nice idea of what to expect. The venue has been worked nicely and while the attendance will never match the packed house that downtown Atlanta can offer, I am judging it as a success on most levels.

The track for Saturday’s race will be remarkably similar to Tuesday’s offering. The only significant difference will be the start. The start is pointed in the opposite direction and funnels riders into the track 10 seconds further into the lap than Tuesday’s setup did. I don’t see a big difference strategically or otherwise, but the look and feel will certainly change.

The only difference in the track layout will concern this start section, too. Instead of crossing over the start and heading into a tricky section of bumps and jumps, riders will have a simple straight away and funnel into the first turn each lap. This removed section was a tricky part of Tuesday’s course and its removal will also lower the lap times on Saturday. Also of note, these track maps weren’t devised with the bridge jump that Cameron McAdoo crashed on but have all been included on the final layout on race day. Will that trend continue? My guess is yes as those bridge assemblies are a big undertaking to add/remove and if they were initially included a week ago, it will likely remain for the residency duration.

As the tracks for rounds 14 and 15 are almost identical, let’s talk about a few of the key sections instead.

The 250SX class is so incredibly challenging for the fantasy world. A rider like Ryan Sipes seems like a certainty for a good result after a breakout afternoon of timed qualifying. His years of experience would surely help navigate the treacherous waters that heat races and LCQ’s present, right? Unfortunately not as those waters’ sirens and sea serpents had their way with the all-around two-wheel master. His huge crash while in qualifying position was the perfect example of how cruel and unpredictable fantasy racing can be. Unfortunately, Sipes announced his supercross season is over after his crash in the LCQ on Tuesday.

For Saturday, I could simply suggest throwing darts at a board. That might offer the same odds as the hours of studying and comparing that I do now. With pure chance being as big of a factor as tendencies, starts, or soil makeup, it’s easy to give up. Alas, I will offer a few names that I *think* have a chance to do well on Saturday. If you hear a man howling in despair on Saturday evening, though, know that the voice is mine and the pain is real.

A few of the laggards have to make good, right? Riders like Dilan Schwartz, Sean Cantrell, and Ryan Surratt have all struggled thus far. Their handicaps are high for a reason, though. If you’re wanting to take some risk, there is upside to be had.

I will be sticking to more reliable options, though. A rider like Chris Blose with a handicap of 2 presents a nice opportunity. “Zombie” Blose is a top-ten rider but has suffered through a couple of tough races (15-13). That has driven his handicap up and offers more points to a nice bounce back. I also think Jace Owen (6) and Jarrett Frye (6) have value here, both being top ten capable with handicaps that are far higher.

For the 450SX Class, the game is changing a bit. The injury bug has bitten this class with Kevin Moranz, Justin Bogle, Kyle Chisholm, Benny Bloss, Brandon Hartranft, and Vince Friese amongst those missing time. That has opened the door for riders like Justin Starling, Josh Hill, Cade Clason, and Henry Miller. Taking a chance on Henry Miller making his first main event of the year would have been a wild swing on Tuesday but it would have paid off nicely. That is where we are in this 450 class, though. Privateers are going to get their chance and fantasy teams can benefit. Good luck on figuring out which privateer will make good, but the opportunity is certainly at hand.

Cameron McAdoo announces his plans to run for president in 2024 after one of the most heroic rides in recent memory.

Kyle Chisholm’s YZ450F is last seen headed south on I-75 after being dismounted at high-speed Tuesday afternoon.