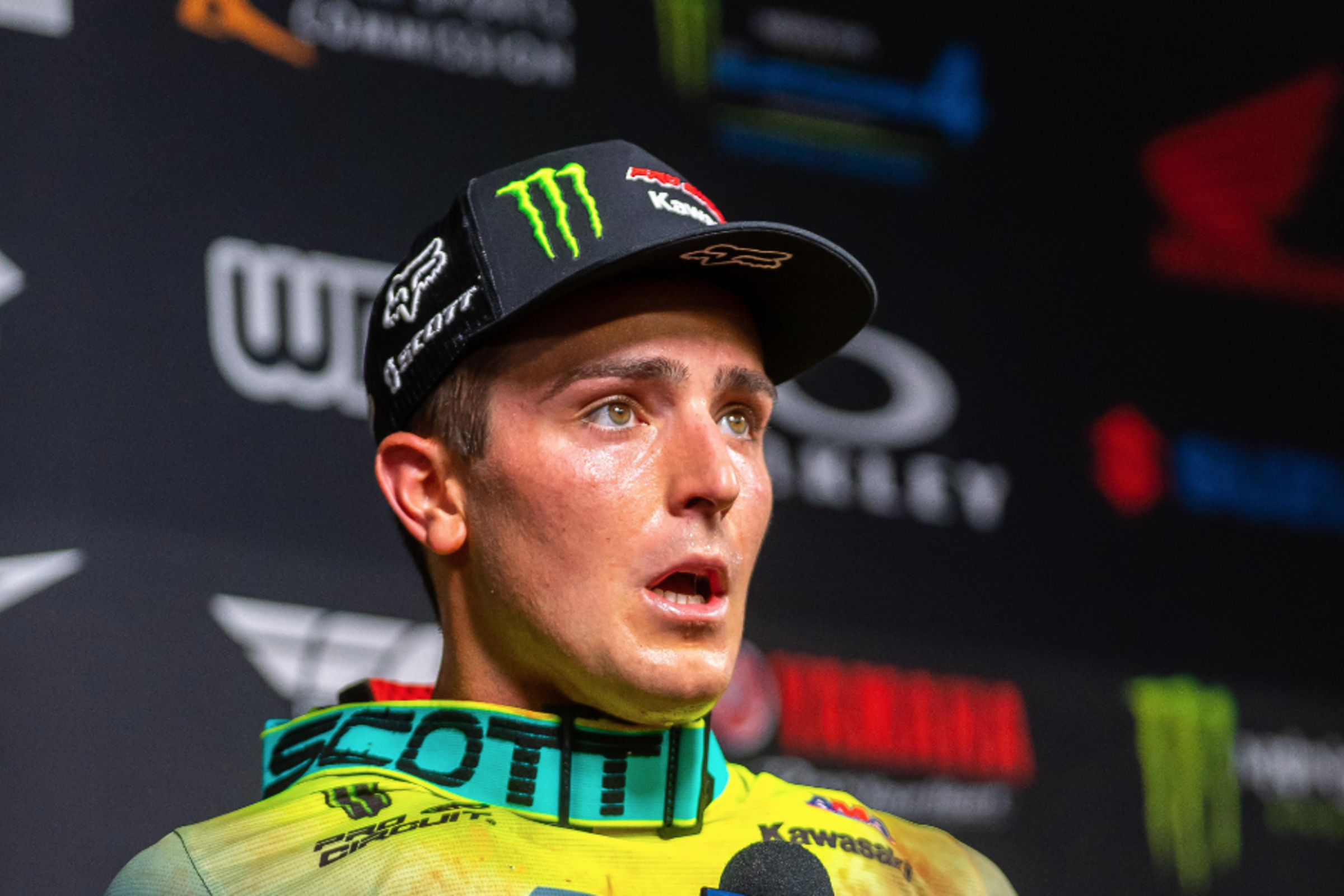 It’s merely a third-place finish, but also one of the most heroic rides in recent Monster Energy AMA Supercross memory. Monster Energy/Pro Circuit Kawasaki’s Cameron McAdoo is locked into a tense 250SX West Region title fight, and the super determined racer has always shown he will do whatever it takes to succeed. In this case McAdoo went over the bars hard and smashed the ground, only to get caught in his flipping motorcycle, which sent him flipping back through the air and all the way to the top of the tunnel jump. The crash alone is one of the most remarkable ever, but McAdoo then added to the drama when he got back up and rejoined the race after the red-flag restart!

Cameron explained the experience during the post-race press conference on Tuesday night.

Racer X: Can you take us through that whole sequence with the crash and then the recovery and how you felt in the early laps of the restart? You were actually leading for a brief bit.
Cameron McAdoo: The crash was obviously crazy. I just re-saw it. I hit my leg really, really bad and I couldn’t move it. I was struggling to get my leg back moving. I was doing my best to get up. I was wanting to go back to my bike. I had the medics kind of tell me, “You probably shouldn’t.” I was like, “No. I want to go back.” Then they helped me down the jump. I was telling them stop. But I got back to my bike after they red flagged it and rode back and just told them I want to race, I’m okay. Obviously [Doctor] Bodnar came over and they checked me out thoroughly because they were concerned about my head. I passed all the tests. My bike was mangled, so the mechanics did the best they could. [Laughs] They were taping shrouds on, zip-tying stuff because everything fell apart. My bars were really rolled back and pretty bent, but I didn’t even really realize that so much until I came around the first turn. I don't think I got the holeshot, but I was leading. It was tough. It was a tough race. About five minutes in when the adrenaline kind of wore off, I really realized how beat up I was. I’m pretty sore now.

You kind of mentioned your leg was hurting before you got restarted. Then your hand looks kind of taped up now. After the race did you get checked out again? Can you talk about what the recovery is going to be like going into Saturday?
I haven’t had my hand checked out yet. It’s pretty big and swollen and it’s sore, obviously. I know I can ride with what I’ve got. I’ve got a pretty beat up leg and my groin is not good. So, we’ve got three, four days to do as much therapy as possible to get back going. I’ll go have x-rays done tomorrow and try and get the swelling out of my hand and my legs and go fight for it on Saturday.

I don't know if you know this at this point or if you were told after, but Peacock caught you on a hot mic pleading with the AMA guys or whoever it was – I think maybe it was one of the medics on the line to get you back on the gate. You were talking about how Doc Bodnar said you were good. First of all, what did Doc Bodnar say to you? Were you more in a sense where you weren’t sure the rules were going to let you, or if they didn’t think you were physically okay to race?
I got off the track and Bodnar was over there. He asked if I was okay. I told him, “Yeah, I’m okay. I want to race.” I ran back to my bike and he was like, “Okay. Do you know what happened?” I was like, “Yup.” So, I ran back to my bike and then I got back over there. I was like, he let me go. It was kind of a heat of the moment thing. I was wanting them to understand, the medics let me go. Then the medics came back over obviously to actually evaluate me totally. So that was good that they did that too, because I don't want to put myself in danger going out there if there was something that was not safe for me to race. So obviously as a racer and a competitor, I’m in the heat in the moment. I wanted to do everything I could to get back to the starting line and race. Then they did a bunch of eye tests and all the things they do. I think they were mostly concerned if I might have had a concussion or if my neck was okay, and stuff like that. So, once they approved me, I lined back up.

Your team owner there, Mitch Payton, he’s been renowned for being tough on his riders in the past and that sort of stuff. When you got back to the truck, what did Mitch say to you about digging deep, getting back out there and putting in a performance like you did?
Honestly, I think he was mostly just concerned, making sure that I was okay. My teammate, Seth [Hammaker], had a rough night too. So, he ended up going to the medic rig as well. I think he was mostly concerned for making sure our health was good and stuff. That’s cool because it’s not just the result or grinding it out or whatever. They actually are concerned about our health, too. So, I think once he realized that I’m okay and what’s going on – obviously, I’m going to be banged up. They’re happy I did everything I could to maximize the night on how horrible it could have been. We’re just all happy that I’m okay.

How did the crash happen? Did you hit neutral, just scrub too hard? I don't know if I ever got clarification on how the actual crash happened.
I’d have to go back to really pick it apart, but I think really what happened was I over-jumped the triple in a little bit, and the pocket to the face of that next double was pretty steep. I think my bike was still compressed and I tried to push through that double while my suspension was still compressed, which obviously gave me the kick over the bars. I think that was just kind of how it went. That was a pretty steep little transition, and I didn’t catch that pocket just perfect. Supercross is obviously gnarly, and you have to respect it.