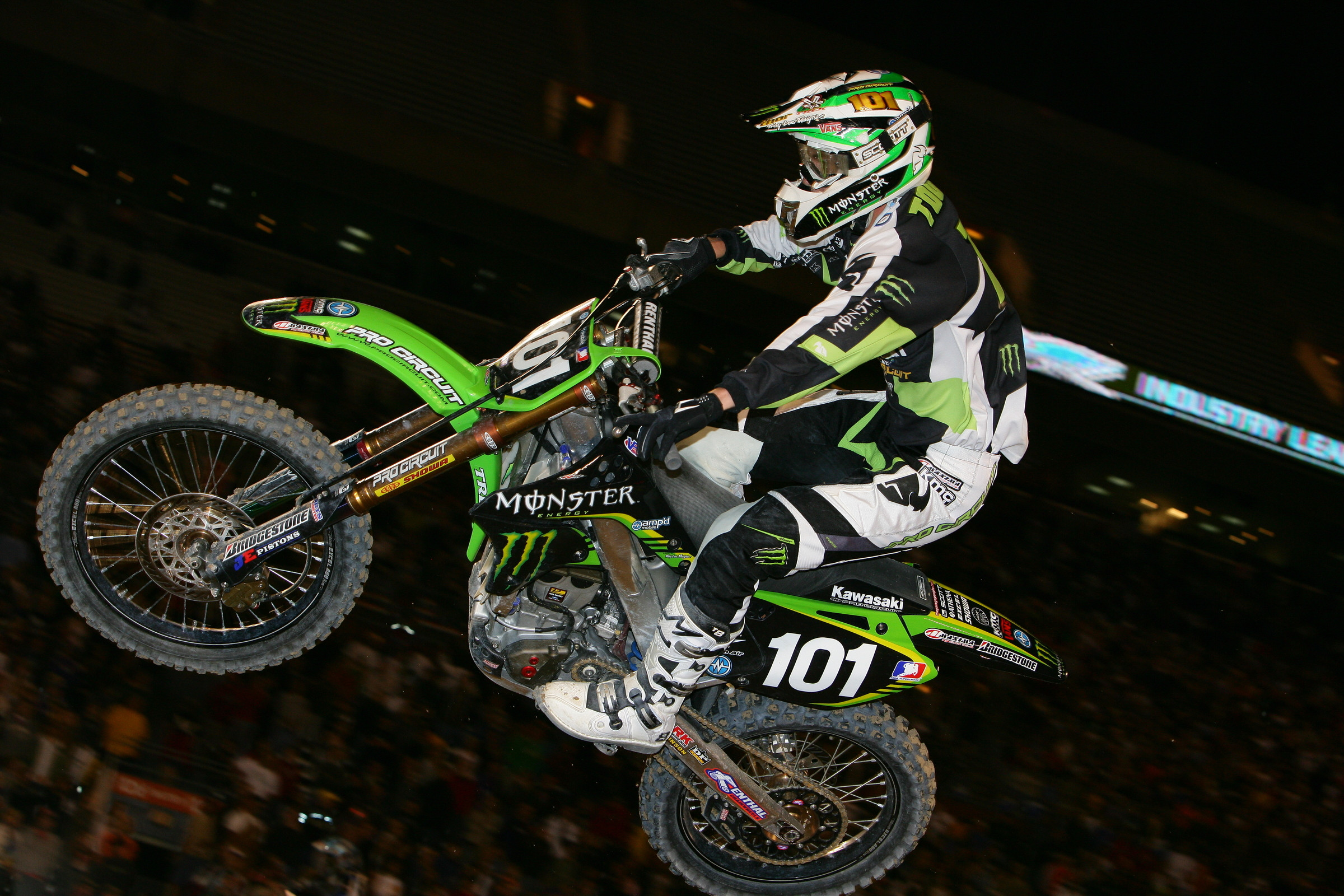 This long break between racing action right in the middle of this 2021 Monster Energy AMA Supercross season has got the bench racing among the Racer X staff going in full swing. Earlier today, our Jason Weigandt wrote about how to categorize riders who have had very successful careers in 450 Supercross but couldn’t quite take that elusive first race victory in the class. Several riders fit into Weege’s category, and most of them had great 125/250F careers and titles but never broke through in the big class. This brought to mind an interesting topic for me: Who are the riders who won 125/250SX championships but never went on to event start a 250/450SX main event?

There are probably a couple of names that jump to your mind at first thought, and it’s easy to assume it could be fairly recent champions who may not have made their 450SX debut yet. However, that’s not the case! There are only four riders who hold the honor of winning in the small-bore division without stepping onto the starting gate in the big stage.

The first rider to do so was straight from the first year they ever ran a 125SX regional championship back in 1985. Todd Campbell rode the coattails of winning the first ever 125SX race at San Diego in February to claim the West Regional championship. Apparently, the points and the breakdown of the East and West races were a little complicated that year, Davey Coombs says he’ll explain that tale someday. Regardless, Campbell is in the record book as the first 125SX West Champion. After that though, Campbell came back for just two races in 1986 for his title defense which would also be the last two professional races of his career. So, no 250cc supercross races for Campbell.

It wasn’t until the 21st century that another rider would join Campbell on this list. In a close battle to the end that even included a DNF in-season, Shae Bentley outlasted our old columnist David Pingree to win the 125SX West title in 2000. Bentley didn’t finish the main at Anaheim 2 but went 3-2-1-1 in the following races to knock Pingree from the championship lead after Ping struggled to a 15th at the penultimate round in Minneapolis. Poor Ping seemed to get taken out in the first turn at every race that year and Minneapolis was no exception. After more craziness at the final race in Texas, Bentley collected a seventh to claim the title by two points. Unfortunately, Bentley then suffered through a slew of injuries and could only race intermittently following his title. All the way until 2005, Bentley never left the 125cc class before retiring. In total, Bentley started 26 125SX main events, winning twice, but never started a 250SX main event during his eight-year professional career.

The third rider to join this list was also the rider with the longest supercross career of the four on it. After four years of working towards it and already having won the 125SX main event at Pontiac in 2002, Branden Jesseman finally put the puzzle pieces together in 2003. He won three of the first five races of the season and outlasted the brick house known as Mike Brown to claim the East title by seven points. Jesseman piled on 56 career 125SX/SX Lites starts with five victories, but again, never stepped foot into the bigger class during this time. Like Bentley, Jesseman suffered through quite a few injuries, and he was never able to capitalize on the momentum of his supercross title. He did officially start one motocross race in the 450 class at Freestone in 2009, but he only finished the first moto in 39th and never raced professionally again after that.

The last rider to join this group actually had to deal with Jesseman during his championship campaign. In what would become his only season racing supercross in the USA, Ben Townley started eight races in 2007, did not finish two of them, won three of them, and won the SX Lites East title by just three points over Ryan Morais. Ironically, Jesseman, trying to mount a comeback after years of injuries, won a round at Orlando during that season. Outside of Townley and Jesseman, the only other rider to win that season won the other three races. You may have heard of him before; he goes by the name Ryan Dungey. Townley won the title though. Then Townley engaged in the titanic battle with Ryan Villopoto in Pro Motocross that most US fans remember him for, but he would never start another supercross again. Townley injured himself before the 2008 season where he was looking to defend his title and Honda HRC gave his seat to Ben Coisy to fill in. And until the Lawrence brothers joined HRC this year, that was the last time Honda had their full factory effort put a 250F on the track in supercross. The injuries for BT101 kept coming, like they did for Jesseman and Bentley, and he never lined up for another supercross after his 2008 championship season.

And that’s it. Campbell, Bentley, Jesseman, and Townley make up this extremely unique list of 125/250SX champions with exactly zero 250/450SX class starts. Many non-champions from the smaller bore class have gone on to great success in the premier class ranks, but these riders never got the chance to show how they would have fared on the big stage.

There is one fun fact I found while researching this as well. Keith Turpin claimed the 1986 125SX East title and would have joined this list had he not officially made the 250SX main event at San Diego in 1987 where he finished last earning a sole point to his name for his premier class career.

Another tidbit to add to this group is that there’s a chance only one rider joins this group (temporarily, of course) from this 2021 season. Nobody in the midst of the 250SX West title fight right now has ever started a 450SX main event unless you count Chris Blose who sits seventh in the standings. On the other coast, Christian Craig has started 11 450SX main events and sits just eight points behind Colt Nichols with two rounds of the 250SX East Championship left to go. So, if Craig can steal the title away, he wouldn’t even join this group because he’s already done quite a bit of 450 racing.

Winning a 250SX title has never guaranteed success in the 450SX class, but it’s certainly been a steppingstone towards it. Will we ever see another rider join Campbell, Bentley, Jesseman, and Townley on this list? There’s no doubt anyone vying for a 250SX Championship hopes not!