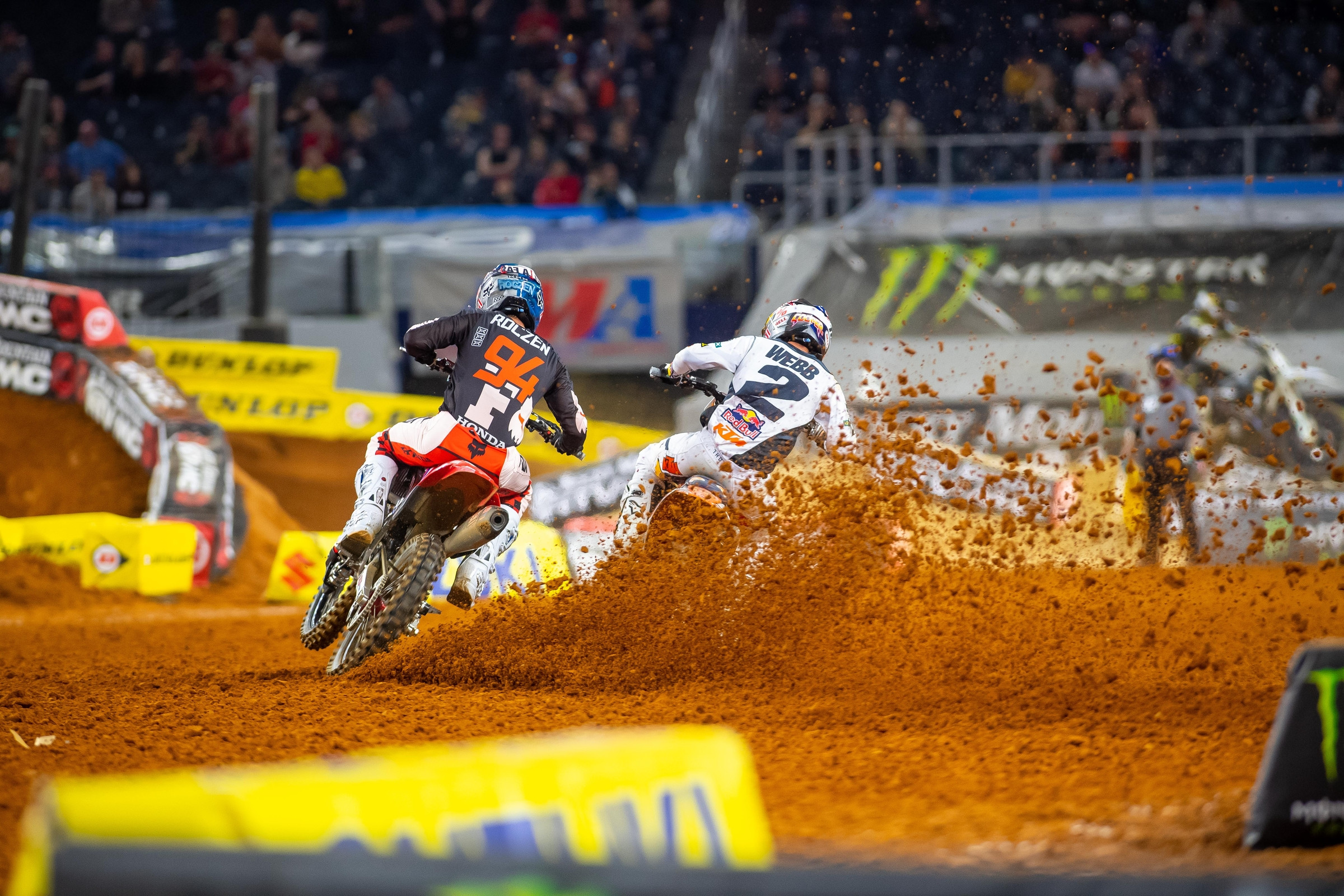 The Moment Sand and Science

After a superb ride in his heat race, Ken Roczen had flipped momentum heading into the main event for Arlington 3. He clearly out paced Cooper Webb in the heat, signaling he had an answer for Webb’s recent hot streak. Ken then grabbed the holeshot in the main event and started putting time on Webb. It wasn’t a ton of time—Ken is a world-class sprinter at the beginning of these races so he’s liable to pull a really big gap early—but it was just enough to where he didn’t have to ride defensive or take on any pressure. Things were looking good for the Honda HRC rider, until suddenly Webb and third place Eli Tomac got right on him. On lap 9, Webb ran a 49.5 while Roczen went 50.1. You couldn’t see it on the TV cameras, but Roczen was starting to struggle in the sand section before the finish line. The line he used in the heat race, going wide and carrying max momentum into the sand, no longer worked.

Webb and Tomac used a different line, cutting out of the berm before the sand and hitting the middle of the exit. A kicker had formed down the middle that provided extra lift and let them hop over the first sand double with ease. That made the next sand double easy as well, plus, they entered the last turn before the finish from the middle, which gave them a nice arc in the corner. Roczen had to start his turn on the inside.

“My problem in the sand section was that in the heat race I think I had a line that worked really well, I kind of finished the turn there and I was on the inside for the turn heading to the finish line,” explained Roczen. “I was just too narrow minded there and stuck in that line for the main event. I should have just cut down from the main line and hopped over the little kicker that formed there. It was a lot easier that way. Where I finished the turn, more on the outside, it seemed like the sand was deeper there, it would get pushed up and I even almost pushed the front a few times. I made a few mistakes in there where I pretty much just singled all the way through the sand. I should have just caught onto that. I lost too much time there.”

That deep sand on the outside kept sapping Ken’s momentum, making it hard to get those two doubles clean. When he clipped them, it not only cost him time, but energy. Plus, starting on the inside of the final turn left him drifting to the outside on the exit, which opened the door for a pass in the next corner. As the main event went on, you could see Webb sizing up his opportunity, and then he finally pounced with a big scrub to get next to his title rival. Roczen was able to rail the outside of the next corner and fire across the start straight, just barely holding onto his lead. They would battle through the next few sections until they got to the whoops, which is normally Ken’s strong point. However, a groove had formed down the middle, and Webb made sure to get there and make a run.

“I should have just gone to the middle line, there was kind of a rut and there were some that were really low, so you could kind of bounce through there,” said Roczen, who instead went high in the berm and used an outside exit to get the best possible drive into the whoops. “I stuck to the left side where they were a lot bigger. It worked out okay sometimes but I feel like in the middle you carry more momentum and carry the angle back across the start straight.”

Of course it’s easy to pick apart these two line choices now, but watching what the TV cameras pick up is much different than a rider on the track trying to see what the riders behind him are doing.

“Sometimes you can catch on to that, but sometimes when you’re leading, and I think Cooper said this in the race before, sometimes when you’re leading you can try things and it will actually come back to bite you,” said Roczen. “Those guys behind you can kind of follow you and pick their battles, but if you’re in front you have to go off of instinct. That’s where I have to learn and I simply didn’t catch on to that line fast enough, and I think that’s where I lost my time.”

There are two ways to look at the battle at the Arlington 3 supercross, and it's the usual choice: the head or the heart? You can use flowery language to describe this as a huge-heart championship comeback by Cooper Webb—all that big statement stuff that comes from the heart. Or you can focus on the science of it all and see this as simply a case of some bad line choices from Ken Roczen. Everyone has an opinion already but most riders would rather focus on the small pieces rather than the big picture, because that keeps everything within a window of what can be controlled. For Roczen, he can look at Arlington 3 as one that got away, but it would be most positive for him to think that with a few different lines on the track, the win, and the momentum, was within his reach.