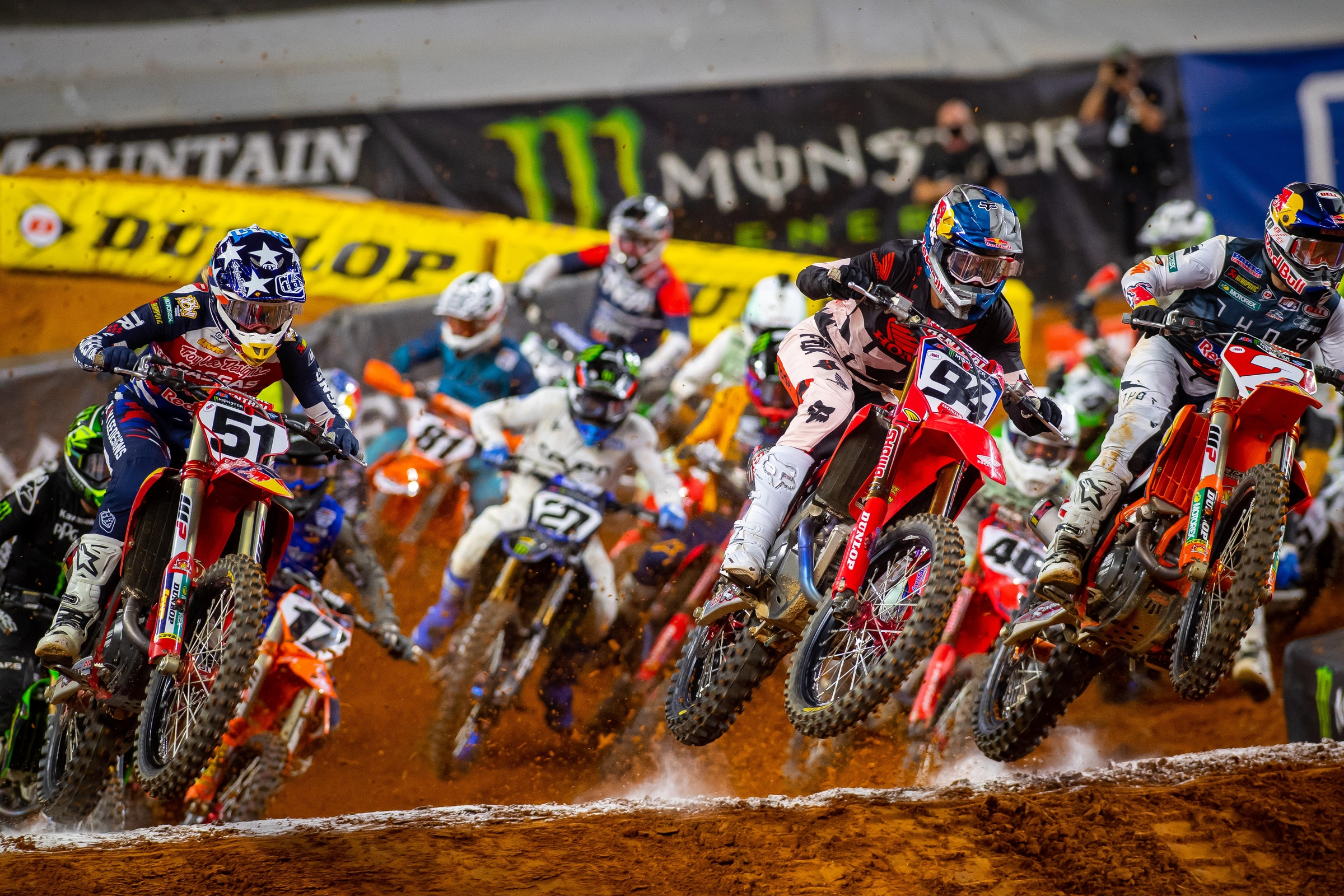 The numbers don’t even come close to telling this story. Cooper Webb just won his third-straight race in Arlington, Texas, his fifth in six races and his sixth of the season and the the 17th of his career. That’s just stats on paper, though. The way he did it was what really made this a dramatic, statement making affair. Webb may be known for turning things around and producing his best stuff in the main events, but even by his standards, this was a big one.

The heat race set the stage. Webb led by Ken Roczen was faster in the whoops and the rhythms, and he leapt big to pull up next to Webb and then execute a block pass in the next turn. For good measure, Roczen’s teammate Chase Sexton came up on Webb and pulled another huge jump combo, getting next to Webb and putting him down on the ground! For Roczen, who desperately needed a big night to get things back on track for the title, things were trending in the right direction.

Then Roczen grabbed the early lead in the main and pulled a slight early edge over Webb. That’s when Webb dug in and made this one a memorable night. He slowed reeled Kenny in, specifically taking advantage when Roczen had repeated problems getting through the sand section clean. Then the battle was on, and Webb was back into his zone. The competition had Webb where they wanted him in the heat race, but when it counted, Webb dug in and made it happen again.

“Man that was a crazy race that’s for sure,” said Webb. “Kenny was laying it down those first few, I was just trying to stay in tow, and Eli was all over me I knew he would be good tonight.  Both those guys were really on it today. I just focused on being consistent. I had to turn it around from that heat race I didn’t like being put on the ground, and it fired me up. Man, to ride with Kenny the whole race and make a late charge is awesome. Just incredible, to get three here in Dallas is unheard of for me.”

Webb’s final move came in the whoops, which is a remarkable turn considering how bad the whoops were for him in the heat race. It’s that kind of turn around that made it one of the most significant wins of his career, and furthers the growing lore of Webb being a gamer when it counts most. With the three-race Arlington sweep, he’s now opened a 15 point advantage over Roczen.

Roczen ended up second and put in a huge late race push to get Webb back in his sights, but it wasn’t enough. He tried to focus on the positive, at least second was better than his recent results.

“It was tough out there, I was leading and they were behind me and I felt like I was hitting my marks,” said Roczen. “I’m still working my way back up, everything is open, I was happy with my starts and my riding. I’m giving it everything I have out there and that’s all I can do. We’re healthy and we’ll come back to Atlanta and try it again.”

Tuesday’s Arlington race was a full-on Roczen/Webb/Tomac battle from the start. This time they had an additional sparring partner in Justin Barcia, who was in the thick of the battle the whole time. Tomac was up to third and stalking Webb hard, but he was frustrated that he had a fast outside line in a rhythm lane, that “went to nowhere.”  Tomac was trying to pass Webb when he bobbled and hit a tough block and nearly went down. This allowed Barcia to get by him, and they spent most of the race scrapping over third.

“It was a fun race that way, always a bummer to be on the third place side,” said Tomac. “We had a good pace going and I was the first to make a mistake. I’m still shaking my head, I didn’t think I was that far wide. The track raced well, Justin and I went at it 2-3 times, I got him when he made a mistake. Just a fun race, Cooper and Ken started ahead of me and that was it.”

Barcia has been darned strong in Texas, with a second last Saturday, a come-from-behind fourth Tuesday, and a close fourth again here tonight. This four pack had a big lead over Jason Anderson, who rode well but again was coming from the back to net fifth. This was a technical track with big rhythm combinations and long whoops. The cream appeared to rise to the top in this one, as the Webb/Roczen/Tomac/Barcia combo was far ahead of everyone else, then came Anderson, and then another gap.

Malcolm Stewart was sixth, then it was Dylan Ferrandis, a very solid ride by Joey Savatgy, Aaron Plessinger and Dean Wilson. The bummer news in the main was another crash for Marvin Musquin, who was out of the race early (a report from NBCSN’s Will Christien indicates Marvin hurt his arm but it might not be serious). Also Sexton, so good in the heat race and the fastest qualifier, crashed out early and looked to be in pain over in the sand section.

Justin Cooper tried to put some normalcy back in the 250SX West Region series, as he became the first two-time winner in that division. He won it wire-to-wire, but he was still frustrated over the last three races, where he went 4-4-5 to breathe life into several riders title hopes.

“I righted the wrong tonight but I’d be lying if I said I wasn’t frustrated with these last few races,” said Cooper. “You can’t let it phase you and it sucks, it was pretty crary to have three in a row like that, I felt like I was coming back from last every time. It was frustrating and I was questioning things, but it just came down to I had to stay out of the carnage. There’s a fine line between sending it those first few laps and getting caught up in that.  Really good to go into the break on top, I feel like that’s where we belong. We’ve worked so hard for this.”

McAdoo says his perspective has changed now that he’s won a race and is fighting for a title.

“It changes a lot and changes quickly,” said McAdoo. “I expect to win and we want to win. Every point counts and we gave up a  lot of them on Tuesday. 12 months ago if I won my heat race and got second in the main I’d be stoked. So I kinda need to keep that in mind, but we’re trying to win this championship and once you win one that’s all you want to strive for. I enjoy racing these guys and we’re all going to fight for it and we all want it bad.”

McAdoo and Cooper benefitted in points from Hunter Lawrence’s crash. The Honda HRC rider was leading the series coming in but crashed out of third place, saved from disaster by the netting set up outside of a berm. Lawrence recovered for fifth,

McAdoo’s rookie teammate Seth Hammaker returned to the podium with third. He made an early mistake in a rhythm that unfortunately caught privateer Coty Schock and left Schock on the ground when they hit, Hammaker kept it on two wheels and then took over third when Lawrence crashed.

“I just want to be consistent from here on out, and try to get podiums,” said Hammaker. “I feel like if I keep it in the top five and on the box we’re going to move up in points.”

Jalek Swoll logged another solid ride on his Rockstar Energy Husqvarna for fourth, ahead of Lawrence.