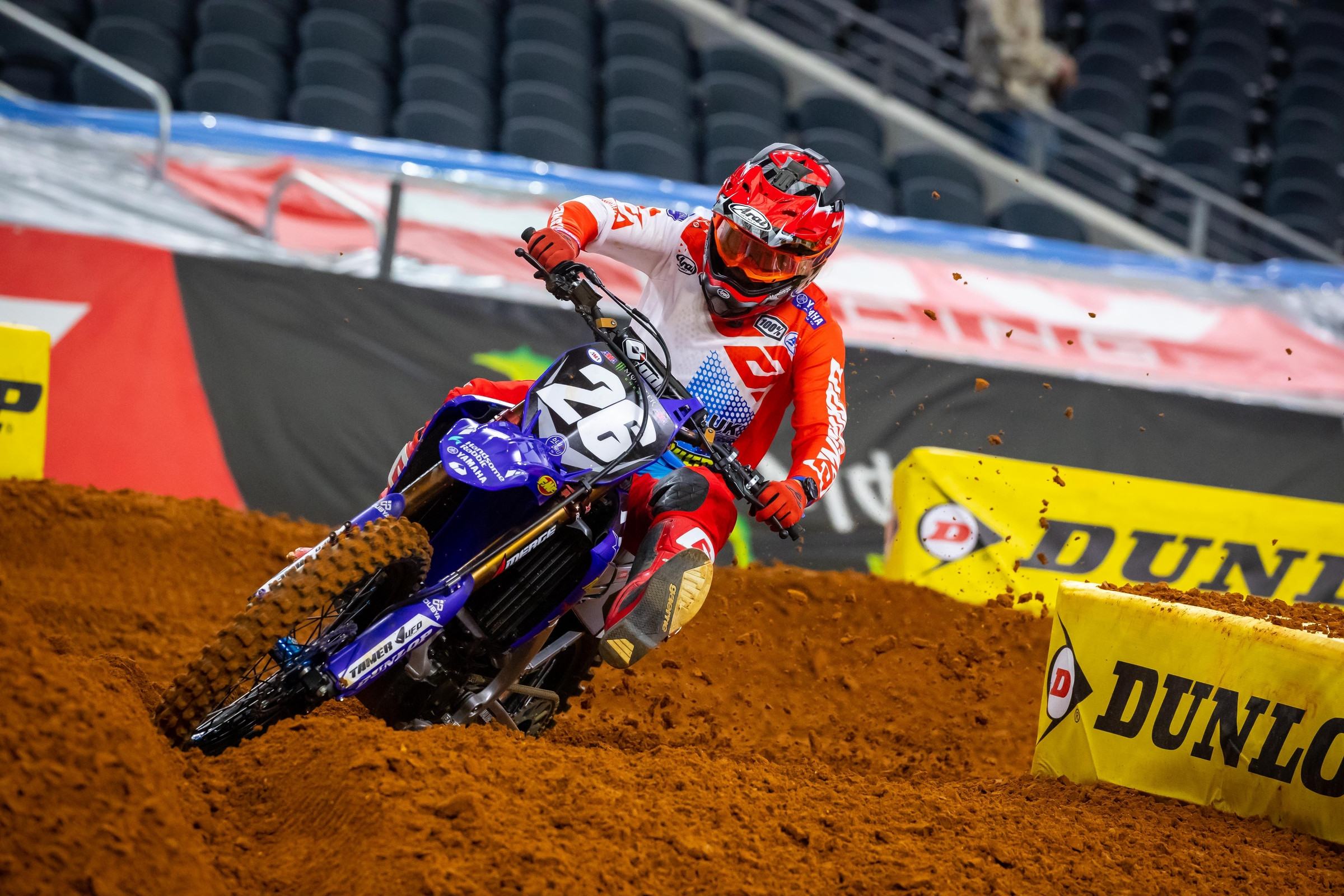 Round 12 of the Monster Energy AMA Supercross Championship (the final of three races in Arlington, Texas) will take place on Saturday night. Check out this report for an update on who’s injured.

Comment: Bloss is dealing with a sore foot after a crash in qualifying at Arlington 2. He’ll be back in Atlanta.

Comment: Brayton, who’s still on the mend from injured ribs, had a mechanical issue on Tuesday night and went over the bars. As of now he has “minor hand injuries,” but the crash probably didn’t do his ribs any favors, either. He's out for Arlington 3.

Comment: Cianciarulo broke his collarbone at Orlando 2. He’s out for Arlington 3.

Comment: Enticknap is out with a broken collarbone suffered at Orlando 2.

Comment: Harlan is out due to a small brain bleed, broken left elbow, broken wrist, and rib and lung injuries sustained at Daytona. He’s out for the immediate future and is playing the waiting game with his wrist and head while doing physical therapy on his elbow.

Comment: McElrath has been dealing with a strained back, which got worse recently. Currently there is no timetable on his return.

Henry Miller – SHOULDER, BANGED UP | IN

Comment: Miller had a bike malfunction at Arlington 2 and went down during qualifying. He’s pretty banged up and has an AC separation above his sternum, but still plans on racing at Arlington 3.

Comment: Musquin had a big crash at Arlington 1 when he found himself in neutral leaving an on/off jump. He hopes to be back for Arlington 3, but that decision won’t be made until Friday.

Comment: Politelli sustained a concussion and AC separation in Daytona. He hopes to return to racing in Atlanta.

Comment: A broken wrist, fractured sternum, and two broken ribs suffered during qualifying at Indy 3 will keep Stephenson on the sidelines for the remainder of the season.

Comment: Brown fell during untimed practice at Arlington 1 and broke his hand. He’s since had surgery and is out for the immediate future.

Comment: Cantrell is out after breaking his collarbone in Orlando. He hopes to be back before the season ends.

Comment: Castelo hasn’t raced since crashing in Daytona. He’s had surgery on his hand and will miss the rest of supercross.

Comment: Crown had a bad crash in Daytona and sustained a concussion. The hope is that he’ll be ready to race in Atlanta.

Comment: Gardner is hoping he’ll be ready to race in Atlanta after missing racing so far with a compression fracture in his lower back and an inferior pubic fracture in his pelvis.

Comment: A broken tibia/fibula and talus will keep Gonzales out of action for the season.

Comment: Martin crashed during qualifying at Arlington 2 and missed the night program. Martin told us his wrist is feeling better, and that he's going to see how he feels on Friday before making a final decision on his status for Saturday.

[Update: Friday, March 19, at 6 p.m.]: Martin has announced on Instagram he is officially out for Saturday's Arlington 3 Supercross.

"Bummed to say I’ll have to miss Arlington 3 tomorrow. Tried to get in as much therapy as I could in the few days we had, but we decided it’s best to heal up 100% and come back for Atlanta healthy. Thanks for the support everyone! 🙏👊"

Comment: Martin is out after dislocating his left shoulder at Orlando 2.

Comment: Robertson sustained a foot injury at Arlington 2, and although he was able to qualify for the main, was unable to line up. At time of posting the team had not responded to our request of confirmation for Robertson’s status.

[Update: saturday, March 20, at 2:35 p.m.]: Robertson has announced he will miss the Arlington 3 Supercross due to an ankle injury.

"Well I tried but unfortunately I’ll be out for tonight. Hurt my ankle on Tuesday and it still doesn’t feel right😤. Will do my best to make it back ASAP . Thanks team @rockstarhusky"

Dilan Schwartz – BANGED UP | OUT

Comment: Schwartz sustained several minor injuries that kept him out of action for Arlington 1 and 2. He’ll also miss Arlington 3, but should be back for Atlanta.