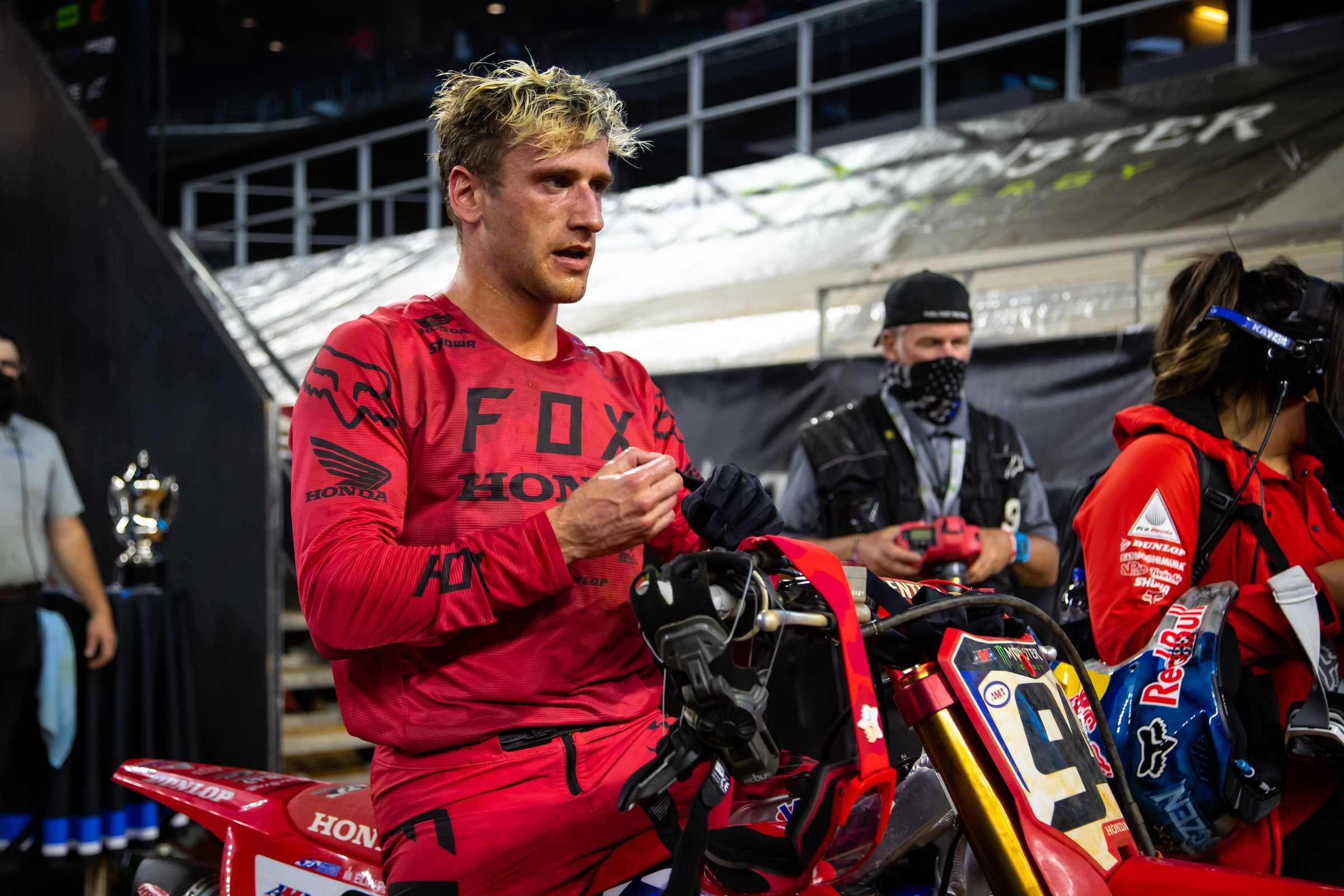 The Conversation No Regrets

While Ken Roczen rode well at the Houston trio of rounds to start Monster Energy AMA Supercross, he also lost valuable points due to a penalty at round two, and losing the lead at Houston 3 while stuck behind lapped rider Dean Wilson on the final lap. No matter, at that point Ken was still crushing it on the track, and he’d soon sweep all three Indianapolis rounds. It hasn’t gone as smoothly lately, and Ken has handed the red plate over to Cooper Webb via 2-4-4-6-3 results over the last few races.

Ken has spoken much this season of staying in the right place, mentally. So how is he feeling now? He spoke with the media after Tuesday night’s race in Arlington.

Racer X: Do you have any regrets over what you said after the race in Daytona?
Ken Roczen: No. I said what I wanted to say. Of course now fingers get pointed with how my races have been. I knew that before going into that, no matter how I did, that fingers would get pointed. This is in the past and obviously I haven’t been on the podium lately, but I’ve just been trying different bike setups lately and they haven’t worked out, so I went back to old faithful in the main event today. That felt a lot better, I think I’m done tinkering with the bike for now. Yeah I don’t know. It’s all good.

Obviously, he’s [Cooper Webb] on it right now. Realistically, the only bad race I had was last weekend and points can turn around quickly. He was winning and I was in sixth or seventh or something like that, but that was my only bad race this year. We’ve still got six rounds to go, and I just want to focus on myself. The red plate, of course it’s a nice little something to have on the bike, but in the end is when it counts and I’m keeping the dream alive, and of course he’s winning a lot right now, but I just want to go out there and do what I love and see if I can get back closer at least,  so we can have a good battle all the way to the end. Essentially, I got a much better start tonight. Obviously, I wasn’t good enough tonight, but in general I’ve been having good starts except the last one. Obviously, I got screwed over in Daytona a little bit, but even before that [the starts were good] and even Daytona, that faked it a little bit, because I wasn’t on the podium just because I got shuffled back. I felt like I was strong and riding decent, and all the rounds before I was riding good. So I’m just going to keep my head up and keep chipping away, you know? That’s all I can do on a weekly basis, anyways. Luckily we have some races to go, so yeah, back at it Saturday and try it again.

I wonder if you can give us some insight as to where you are, mentally. Is the focus really on bike settings at your level, or is it just a mental test at this point to win this championship?
Well, first off I try to stay off of media stuff as much as I can. I’m trying to just be in the moment. I’m trying to keep it pretty mellow. I knew coming into this season that it’s a long season and there’s always going to be ups and downs. The last few races haven’t been the greatest results-wise. I’m honestly in the same mentality, and that’s just going racing and trying to enjoy myself and enjoy what I do. I think that’s when I function the best. When you really look at it, 12 points isn’t a lot, and like Cooper said, you never want to get comfortable, anything can happen. Of course there were a couple of points that were taken away from me at the beginning of the season and I feel like if I could have had those back it would be ever tighter. So I’m just going to continue to do the same thing, try to continue to put myself in a good position as far as starts, try to snag a couple of wins and see where we’re at at the end of the season. Nobody ever said it was going to be easy, no championship comes easy, so I’m just trying to stay stable and relaxed and enjoy what we’re doing. That’s the fun part about competing.

I want to go back earlier in the year when you had the penalty, a four-point penalty, and then the next race with the issue with Dean Wilson costing you the win, that cost you three points. Are you thinking about that now or are you just looking ahead now that you’re down 12 points?
Yeah, I mean it doesn’t really matter at this point. It’s the past, it happened, it is what it is. But those are points, I mean honestly the whole Dean thing was just a legit lapper thing that didn’t work out in my favor. But the AMA ruling [four-point penalty for jumping while the red cross flag was showing] I still disagree with it, but what am I going to do about it now? In general, the three Houston races bit me bad a little bit, but I didn’t want to get stuck on it and let my whole season get hung up on that. We still left, I don’t even know if we left there with the red plate, but I did have the red plate for more races than I’ve ever had in my life before so that’s pretty cool. So I’m holding onto the positive. Just continuing to chip away and what’s in the now and what’s ahead of me, looking back there is not going to do me any good.