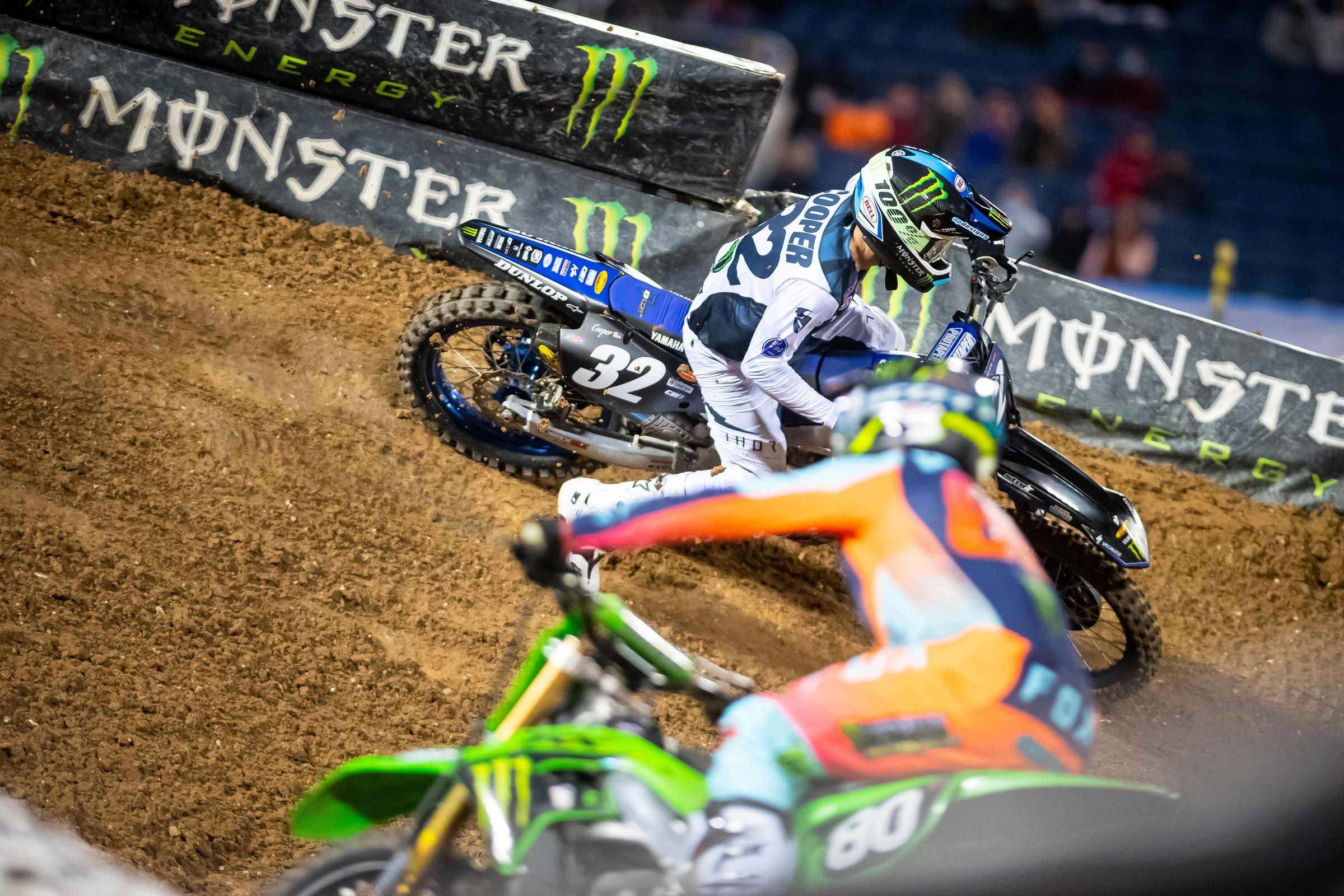 At the eighth round of the Monster Energy AMA Supercross Championship in Orlando, Florida, the 250SX West Region joined into the championship. Qualifying kicked off and over 60 fresh faces took to the track for the first time. Throughout the day, we watched veteran riders battle the latest amateur graduates for positions in both qualifying and the races in the night program.

Once the 250SX main event started, after Jace Owen grabbed the holeshot, consistent podium threat and race winner Justin Cooper quickly passed his fellow brand-mate for the race lead. However, Cooper and the field were quickly red flagged after a downed rider needed medical attention. Heading into the turn before the whoops, Alex Martin went over the bars in the rollers and was not moving, which called for the race to be red flagged. After the medical crew had tended to Alex, he sat up and then was eventually carted off the track (Our Steve Matthes talked to a source in Martin's camp that indicated Alex likely suffered a concussion, but he will otherwise be okay). Per the AMA rulebook, since the race leaders had completed less than three laps, the race would be a full gated restart. But A-Mart wasn’t the only rider who would not be lining up for the restart of the race.

In a separate crash his brother Jeremy—a preseason title favorite—singled into the first section, behind him supercross rookie Stilez Robertson doubled in and ran directly into J-Mart’s back. While it just appeared to be a racing incident, J-Mart’s season seemed gone before it really even got to start. He was holding his left shoulder as he walked off the side of the track, not even considering remounting his crashed Yamaha. J-Mart eventually hopped onto the back of a different medical cart and his night was over, he was instantly 25 points down before the race had even finished. The early diagnosis on J-Mart was that he had dislocated his left shoulder but according to a Facebook post from his mother it was put back into place. The team said J-Mart is expected to undergo further testing this week.

Back in the center of the stadium, bikes were revved up as the race officially began for the second time. But luckily for Cooper, once the gate dropped on the restart, he found himself right where he had left off—with the lead. The #32 went on to lead all 19 laps in the race to take his second career 250SX main event. For Cooper, the win provided a deep breath after he suffered a broken foot in December and was unsure of where he would stand at the first round. Alas, he compiled his main event win and his 12th SX podium finish in his 20th start. After the race he talked about the restart in the post-race press conference.

“The first round is always wild,” Cooper said in the post-race press conference. “It’s good to get through them healthy and better yet to win it. We saw with that red flag and a couple guys go out. That’s not what you want to see. Pretty sure I rolled every jump for two sections. There were medic guys running everywhere. I think Cameron [McAdoo] even, I heard, got one of them. It was crazy. It was hectic. I knew it was going to get red flagged after that. I got two good starts. Got out front again and really just put down a couple laps and was able to ride pretty comfortable out front. Started to get into some lappers and just glad it wasn’t too bad. Overall a good day. Felt pretty good all day. The track was tough. Just glad to get this one safe.”

Watch the highlights from round one of the 250SX West Region below: