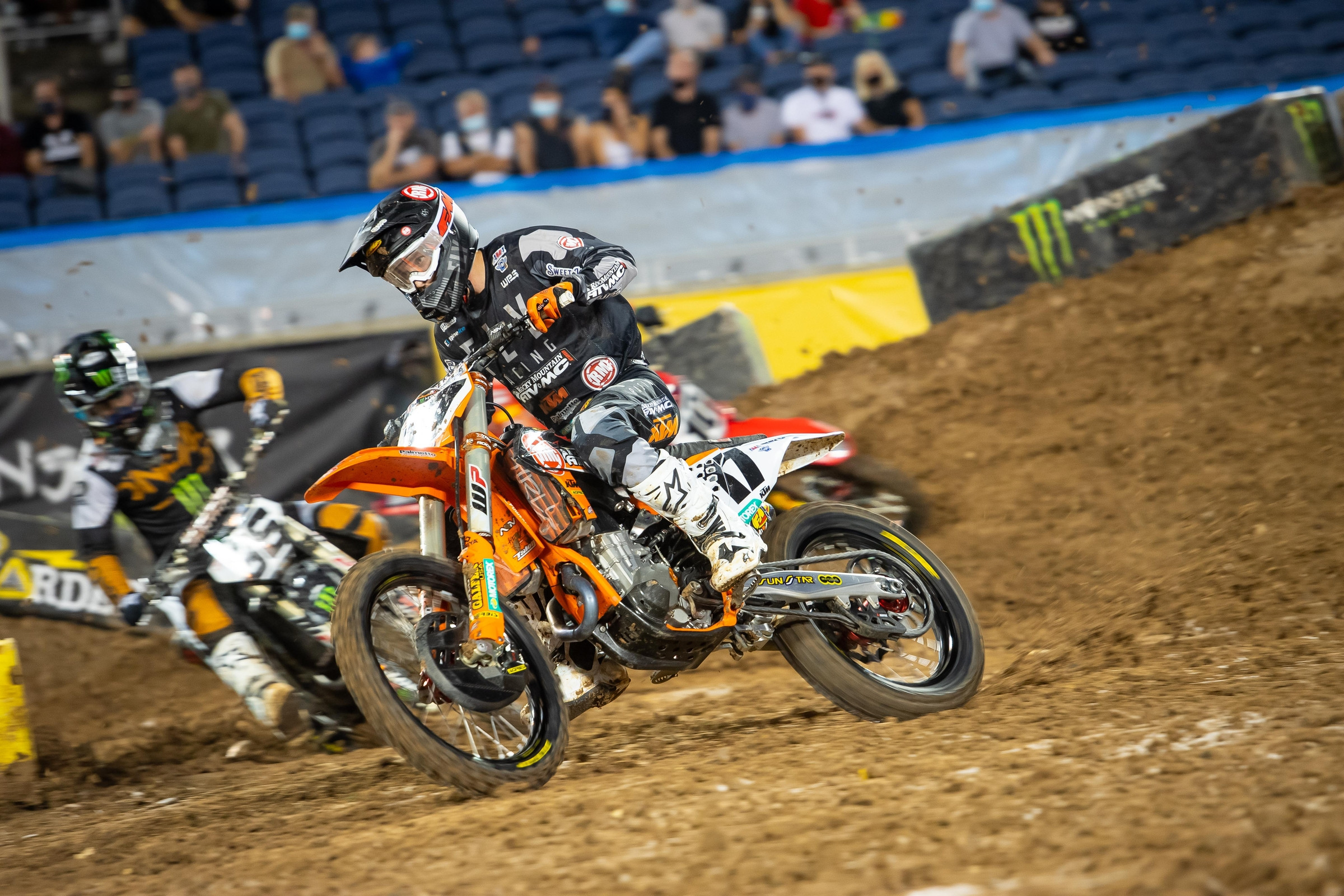 Before the gate dropped in Orlando, Ken Roczen was riding a three-race win streak and held a 16-point advantage over second-place Cooper Webb. Roczen was by no means long gone, but he certainly had momentum on his side. Webb put a stop to it last week however, when he passed into the lead on lap four and never gave it back. Can Webb wrestle more momentum away from Roczen and go back-to-back at Orlando 2? –Aaron Hansel

The Champ is Due

There’s no question Tomac isn’t riding with the same dominance he’s had in past seasons, but he’s still more than capable of winning races and being mix for the title. He slipped even farther back last week when he took fifth, putting him 29 points back of Roczen. There’s still a lot of racing left, but Tomac really needs to get up front and stay there if he’s going to claw his way back into contention. –Hansel

If you don’t remember Max Anstie racing any supercross before that’s okay—he hasn’t lined up for an SX race since 2013, and he’s never competed in a 450SX race. That was slated to change in 2020, but an Achilles injury kept him out of the stadiums. His 450SX debut was further delayed when he injured his back shortly before the 2021 season, but he’ll finally get a chance to run with the big boys of supercross when he gets back at it this Saturday in Orlando. –Hansel

Podiums are hard to come by these days, but you still probably wouldn’t have expected Zach Osborne to go to the seventh round before landing on the box. After all, the two-time 250SX champ won the final 450SX race in 2020 and won the Lucas Oil AMA Pro Motocross 450 National Championship last summer! Well, he finally made it happen in Orlando by taking third place. It gave him a boost in the points too, and while he sits in eighth, he’s only ten points back of Adam Cianciarulo in fourth. If he gets another podium he could substantially move forward in the standings. –Hansel

It sure feels like Joey Savatgy is going to have a breakout ride one of these nights. He’s shown some speed and potential for some great finishes this season, but it just hasn’t come together. Orlando 1 was another of those nights—Savatgy got a good start and was running sixth for the first six laps but crashed and lost a bunch of positions and eventually took thirteenth. His best finish this season is eighth, but sooner or later he’s going to beat that. –Hansel

Due to inclement weather in the Orlando area this week, the Dirt Wurx track crew was unable to make drastic changes to the track between the first and second Orlando rounds like initially planned. As such, we will see a very similar racetrack this weekend to the one we saw last Saturday with only a few rhythm lanes being slightly altered. What can the field do seven days later on essentially the same track? We’ll find out this weekend. –Kellen Brauer

This Saturday will bring us a new season opener when the 250SX West Region Championship kicks off within round eight of the full championship. The list of names is long and will certainly provide an entirely different landscape than the one we’ve seen with the 250SX East Region to this point. So, the question then becomes who breaks out first this weekend? We shall see. –Brauer

Many of the riders making their supercross debut this weekend, such as Monster Energy/Star Yamaha Racing teammates Nate Thrasher and Jarrett Frye, Rockstar Energy Husqvarna’s Stilez Robertson, FXR/Chaparral Honda’s Carson Mumford and many others actually already have pro experience in Lucas Oil Pro Motocross. That is not the case for Monster Energy/Pro Circuit Kawasaki debutant Seth Hammaker who will make his professional debut this weekend in Orlando. Keep an eye out for Hammaker to see how his approach is to stepping onto the big stage for the first time. –Brauer

Monster Energy Kawasaki’s Adam Cianciarulo has not been having a good couple of weeks since injuring his hip before the Indianapolis 2 Supercross. After a consistent front-running pace through the first four rounds, Cianciarulo has hit a bit of a wall the last three rounds with a 10th place finish at Orlando 1 to boot. While he continues to recover from offseason elbow surgery, the hip injury has set AC back that much more. Look to see if Cianciarulo can turn the ship back in the right direction this weekend. –Brauer

Saturday will mark the eighth round of the series in just 35 days in what has been a very rapid schedule to this point. The following weekend after this one will be the first off weekend for riders of the year and could be a bit of a momentum shifter as well. Riders with ailing injuries will be looking forward to the weekend off while riders with momentum on their side likely will wish for another Tuesday race. Either way, this weekend will mark the end of the “first half” of the season to a degree and that might make it a crucial round for many reasons. –Brauer