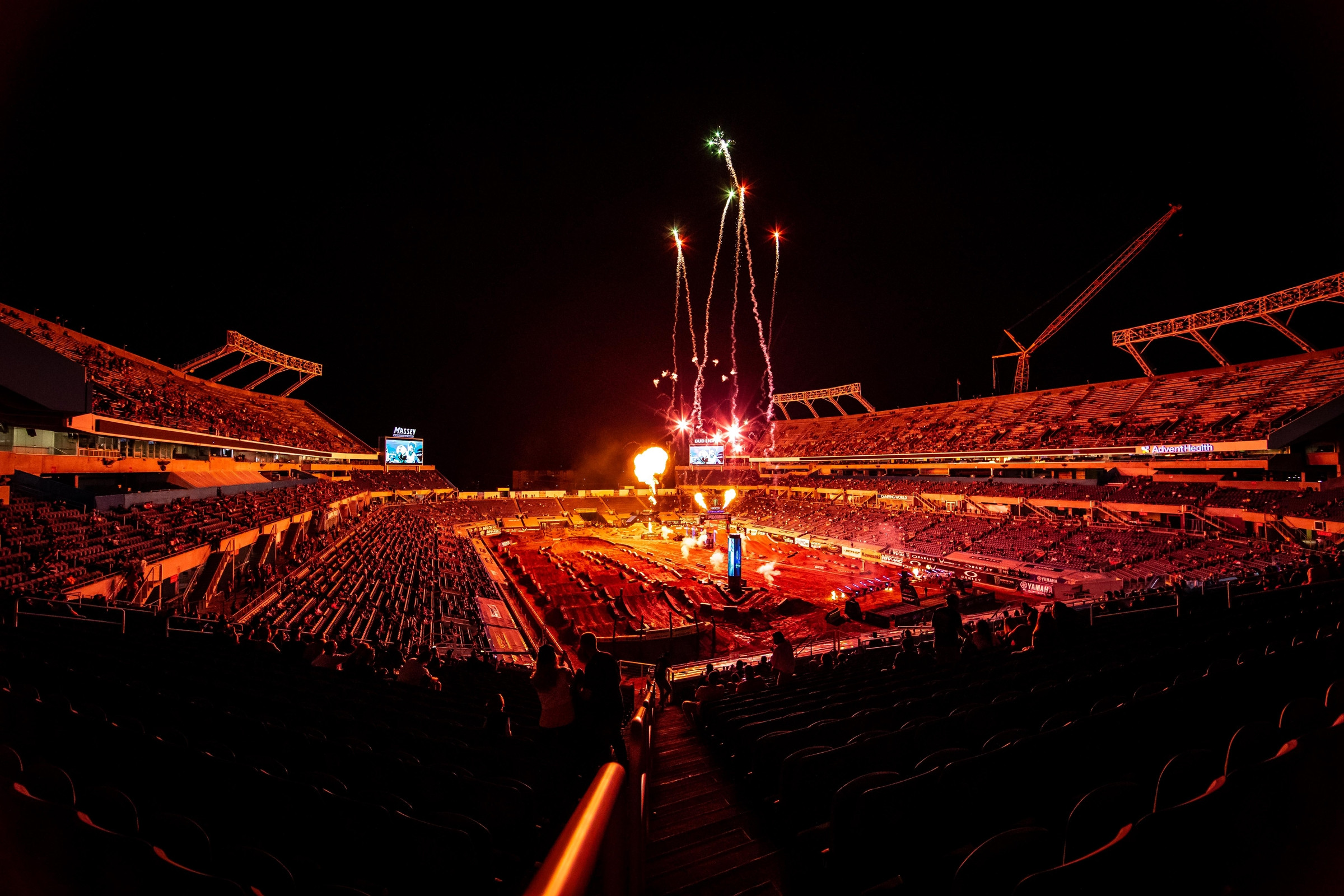 The points tally said Cooper Webb was down just 16 marks on Ken Roczen within the first half of this Monster Energy Supercross campaign, which doesn’t sound like much, but  Webb is keenly aware of how momentum works in a series. In a much-needed boost for his championship hopes, the 2019 AMA Supercross Champion was able to get the better of his rival Roczen this time, in an inverse of their battle last Saturday, which went to Roczen. It’s still not halfway, but Roczen and Webb are threatening to make this season a two-man fight, especially with Eli Tomac suffering another bad start and finishing this one in fifth, dropping 29 points behind Roczen in the series.

Webb has closed to 13 down, helped by some chaotic opening laps. Webb started fourth with Zahc Osborne, Justin Brayton and Roczen leading, but Osborne made a huge mistake in the whoops, which shot Brayton to the lead. While Roczen was dealing with Brayton, Webb pounced on both to make a double pass. It was the first time Webb found himself leading significant laps this year (his previous win at round three was courtesy of a last-lap move) and this time it was his turn to deal with pressure from Roczen. Kenny kept it close, but Cooper hung on.

“Yeah these last two have been great, last week we were close, and this was a great race,” said Webb. “I got a good start and had good speed at the beginning of the race, made some good passes right away. It was tough man. I haven’t led like that in while, it’s definitely different when you’re leading a majority of the main event like that. I had to get used to that, I made a lot of mistakes toward the end of the race and Kenny caught up. I  was able to get it done. Man it feels good, I think we needed to stop that momentum that Kenny has, and it was tooth-and-nail, 1 and 2.”

Indeed it was. Roczen got right back to Webb’s rear wheel after Webb passed him, and it looked like he might get him for a bit. Then Webb put some distance between them. Traditionally, Roczen has been the faster guy at the beginning of the races and Webb has been better later, but this time Roczen put on a late charge to almost get Webb back on the last lap. The final margin was just .9 seconds. Last week Roczen topped Webb by .8!

“Yeah about mid race I lost touch a little bit, after that we kind of yo-yoed,” said Roczen. “I reeled back up again, but I had some close calls in the whoops. Just got kicked a little weird and almost went down. I simply wasn’t fast enough to get back on him and make the pass. I got held up a little by Justin [Brayton], but that’s okay, he was riding awesome, so we were all battling, and Cooper got us both in this turn. Overall you can’t win ‘em all, we had a good solid night and minimized the damage.”

The battle for third was wild. Osborne was off early in the race and got shuffled back. Then he got his lines together—switching from the left to the right in the whoops helped greatly—and started moving forward again. Meanwhile Justin Barcia was on fire early in the race, launching up to third and keeping real heat on Roczen for awhile. Then Barcia almost crashed in the whoops, only a spectacular save kept him from going down. The surging Osborne got back past him. Barcia hung tough but couldn’t get back around Zach, taking fourth. Tomac, about 11th early, came through for fifth.

The third marked Osborne’s first podium of the season.

“It was one of the toughest days and weeks of my career, I was not feeling the flow after Indy," said Osborne. "I had a bike issue that cost us the second practice. We were just kind of fighting the momentum going the wrong direction lately. Felt good to get a start, that’s where I’ve been really struggling, my starts. I changed a couple of things for the start, it was a complete roll of the dice and it worked out. After such a strong outdoor season to struggle in the beginning of the year has been really tough for me.”

The battles just outside the top five have been furious this year and tonight was not an exception. Aaron Plessinger notched another solid finish with sixth, then Marvin Musquin overcame yet another terrible start to net seventh. Musquin had to battle hard to get Jason Anderson late in the race. Anderson rode better in Orlando day and night than he had at any race all year, but still ended up eighth behind Musquin who made a late move. Malcolm Stewart was ninth, and Adam Cianciarulo grabbed tenth. Brayton ended up 11th after leading,  he had some up and down laps.

Dean Wilson returned from a broken toe to finish 12th, and Joey Savatgy was up front and flying early, nearly passing Osborne for fourth. Then Savatgy crashed and lost several positions. Benny Bloss and Vince Friese wrapped up the top 15. Also Shane McElrath returned to action for the first time in 2021 and looked very fast en route  to second place in his heat race, but lost steam in the final laps of the main event and finished 17th.

In the 250s, Jett Lawrence is suddenly back! The 17-year-old Australian won the second race of the 250SX East campaign but then went through all sorts of drama in the next few races, from horrible starts to crashes and a shoulder injury. Suddenly on this night he got his starts back and went fast enough to even hold off series leader Colt Nichols to the end. Nichols was able catch Jett and nearly everyone else from way back last weekend. This time, Lawrence had enough to hold Nichols at bay and take the win.

“That ride, I finally got my starts sorted," said Lawrence. "I had no idea where Colt was, then halfway through I saw a Star helmet, then I didn’t see anything and I was like “Did he go down?” Then all of a sudden at the end I started hearing the Star bike right behind again! It was a really good ride, I’ve gotta thank the crowd. I love this crowd. You guys need to give yourselves a pat on the back!”

Nichols made an early run at Lawrence then nearly crashed huge over a triple. He couldn’t quite reel Lawrence back in, although traffic and mistakes got Nichols close on the last lap.

"I had a pretty big moment on a triple. I was trying to do everything I could to catch Jett, he had some sections where he was better than me. Hats off to him, he rode good and he got off in front of me on the gate. I was trying but I couldn’t get him tonight. Pretty frustrating race to be that close, but I can’t take anything away from the kid.”

Nichols does add a few points on his teammate Christian Craig, who suffered a huge crash in his heat race while leading. Craig suffered a hand injury but was able to come back for the LCQ, win it, and log steady laps in the main to salvage third.

“I’m in a title chase and there’s no giving up,” he said. “When I got out there in the main event, my adrenaline kicked in, the pain went away and I salvaged points. Only lost a couple, so I can heal up, we’ll see you in Salt Lake.”