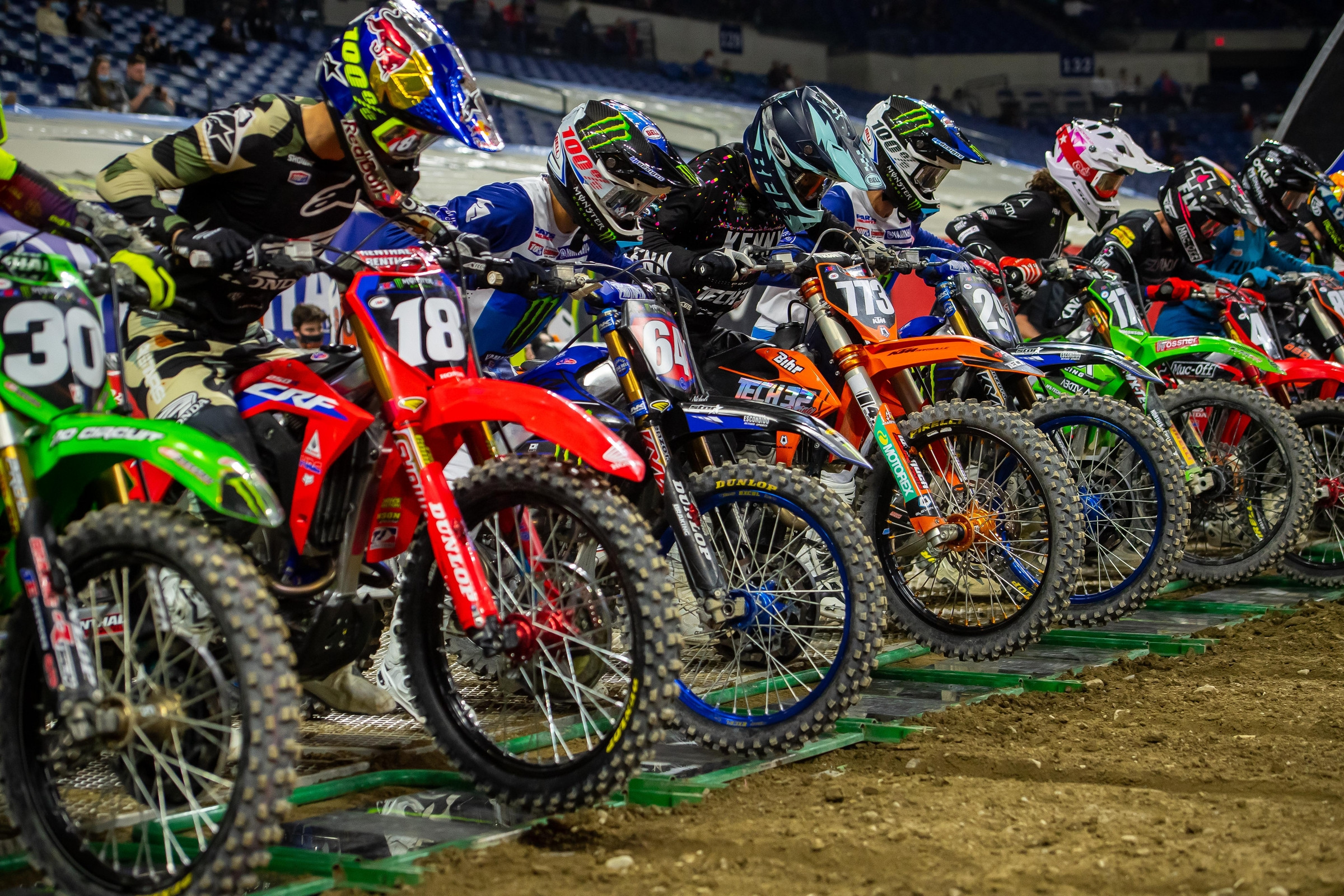 Marvin Musquin was third at the season opener, but since then bad luck and a slew of crashes have really hampered his results. Well, he turned things around at Indy 3, and with a little help from Vince Friese, who triggered a crash that took down Justin Barcia and Eli Tomac, he ended up third. Musquin getting on the podium is nothing new or surprising, but it's not a given, either. If he wants to be there consistently, he’s got to, in his own words, put himself in a better position once the gate drops. We’ll see if he can get on the podium again in Orlando. –Aaron Hansel

Shane McElrath has technically raced in the 450SX Class before—he took twelfth in Daytona in 2019 and was eleventh in East Rutherford in 2015—but c’mon, do those even count? For all intents and purposes, his real 450SX debut will take place when he lines up this Saturday in Orlando. The SmarTop/Bullfrog Spas/MotoConcepts Honda rider hasn’t raced yet this season after suffering a separated shoulder at the beginning of the year. How will the beginning of his first fulltime season in the 450SX Class go? –Hansel

The season is far from over, but right now Roczen sure is looking as though he’s trying to make it boring. The Honda HRC rider swept the Indy leg of the season, and thanks to none of his competitors consistently finishing right behind him, he’s built a nice, 16-point cushion over Cooper Webb. By no means is that a safe gap, especially before we even reach the season’s midpoint, but considering how strong Roczen has been so far, it’s the last thing his competition wants to see. If any of the contenders wants to prevent Roczen from running away, they'll need to put a stop to his roll in Orlando. –Hansel

After winning the last three races in a row, Colt Nichols sure looked like he was on his way to his fourth straight victory when he jumped out to the lead early at Indy 3. But instead of checking out he crashed big, and Christian Craig was there to capitalize. When the checkers flew, Nichols had charged all the way up to third, but Craig won, taking five points out of Nichols’ lead to lower it to just six. If Craig can get another win at Orlando won, he’d lower Nichols’ lead by at least three points, setting the stage for an epic title showdown once the 250SX region resumes at the end of April. –Hansel

No matter what happens on the track, a podium finish is always earned in Monster Energy Supercross. But even so, Jo Shimoda didn’t quite see it that way when he inherited third place at Indy 1 after Christian Craig and Jett Lawrence went off the track on the final lap. The Monster Energy/Pro Circuit/Kawasaki rider said in his TV interview that he wanted to earn a podium, not acquire it due to other riders crashing. Well, he got his wish at Indy 3, where he raced his way to second place. Can he get back on the box in Orlando? –Hansel

McElrath isn't the only rider who will be coming back this Saturday night. Henry Miller is set to return to action following a wrist injury that's kept him on the sidelines since last summer, Austin Politelli is back after hitting his head and missing Indy 3, and Dean Wilson will also attempt to give it a go. Wilson, who hasn't raced since Houston on account of a broken toe, will decide whether or not he'll take part in the night program after seeing how he feels in practice. The heat races just got a little more crowded! -Hansel

This Saturday night is the last 250SX East race until the right coast resumes out west in Salt Lake City, which means it's the last opportunity for the racers in the class to get points and post career-best results. We've already discussed guys like Craig, Nichols, and Shimoda, but guys like Josh Osby, Mitchell Oldenburg, Grant Harlan, Thomas Do, Josh Varize, Jeremy Hand, and plenty more are also scrapping for points and position. Who's going to deliver when the gate drops in Orlando? -Hansel

We've repeated this in nearly every 10 Things to Watch all year: Zach Osborne needs better starts in order to get better finishes. He's been nowhere early in the races, and that's why a man who looked to have the speed to win early in the season is sitting ninth in points. For most of the year, Osborne has been in lock step with his training partner Marvin Musquin, who has also been fast but luckless. The racing Gods finally paid Marv back last Saturday (see the Marvin entry above). What if Zach finally sees the ball roll his direction? If either Zach or Marv come through the first turn in the lead, can they stay there all the way to the end. We know both riders would like to find out. - Jason Weigandt

Last Saturday was shaping up to be Justin Barcia's best race of the season since the season opener. He actually got second at Indy 2, but he was way behind Ken Roczen in that one. At Indy 3, he had the speed to stay in the fight the whole way, coming too close for comfort when trying to pass Kenny at one point, and he still had Roczen and Cooper Webb in sight with three laps to go. That's when he went down in a collision with Vince Friese (which we've dissected to death) and ended up 19th. Barcia didn't get up quickly from that crash, but he eventually did cross the line 19th. Are there some bumps and bruises left over, or can he pick up with the speed he showed until that fateful incident? - Weigandt

Look, it's often foolish to predict mud races in advance in this sport, because tracks get covered and track crews know how to manage the weather. Right now, the Orlando track is under the tarps, shielding it from Friday rain. But sometimes a bit of moisture gets under those tarps, usually at lower portions of the jump transitions. That could lead to ruts. Further, if one of Florida's notorious thunderstorms rolled in at the wrong time, such as when a gate is dropping for a main event, it's going to have an impact. - Weigandt