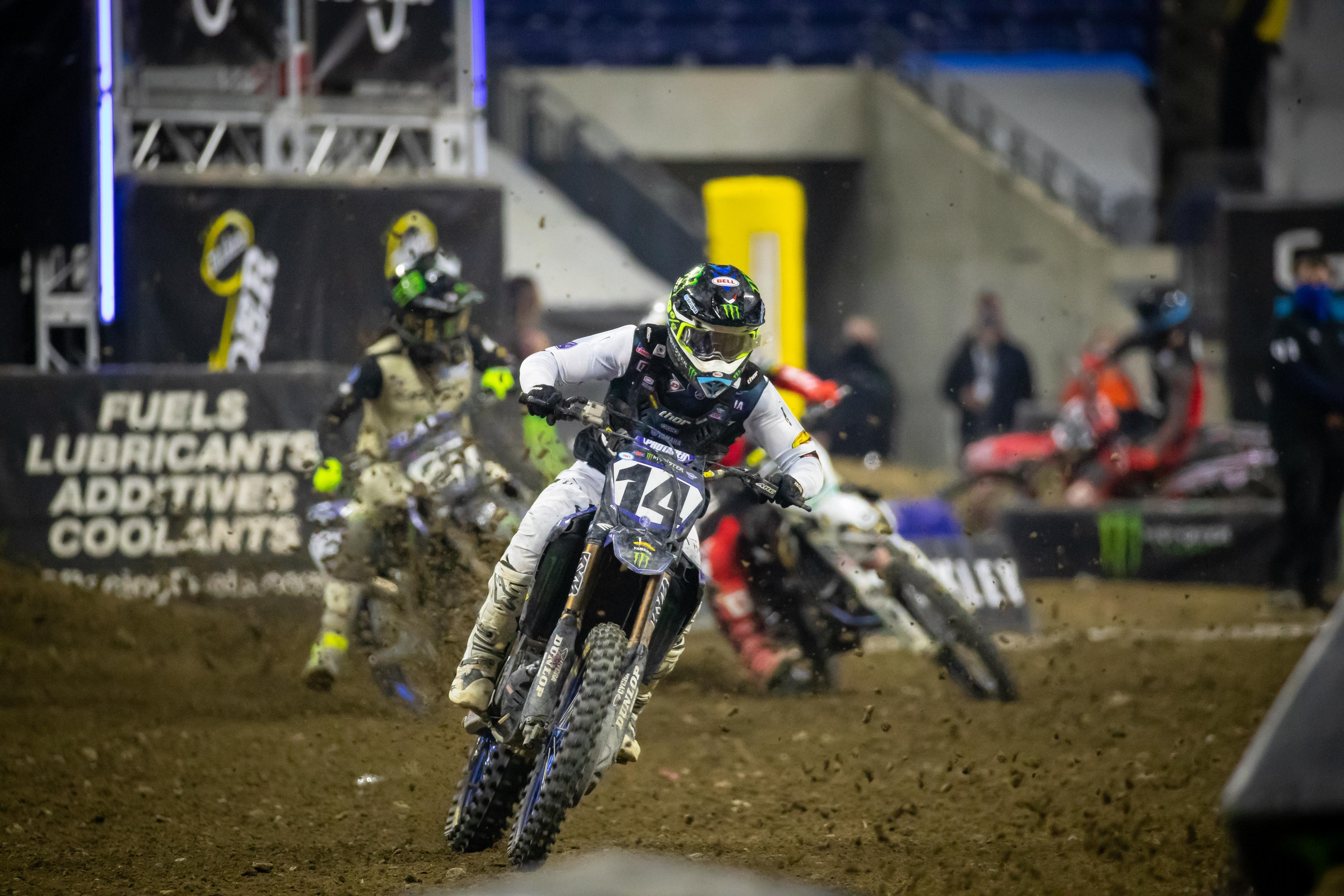 Michael Mosiman was on the cusp of having a breakout ride on Tuesday. The Troy Lee Designs/Red Bull/GasGas Factory Racing rider was leading early (and even set the fastest lap of the race), but was forced to slow up to avoid a tumbling lapped Max Miller, along with his bouncing bike. That allowed Colt Nichols to go by, and after that Mosiman seemed to lose his rhythm slightly, giving up another spot to Christian Craig. On the positive side, he still finished on the podium and he led seven laps to start the race. Can he lead even more on Saturday night? –Aaron Hansel

The Muc-Off Honda team probably left Indy 2 wondering what on Earth they’d done to anger the moto gods. Mitchell Oldenburg nearly missed the main event after the AMA thought he was trying to use a frame that hadn’t gone through tech inspection, and after they figured out their mistake and let him into the 250SX main event, bike problems relegated him to 12th place. To make matters worse, Justin Brayton crashed late in the 450SX race and wasn’t able to finish. As far as results go, things literally couldn’t have gotten much worse for the team. The good news is, the only place they can go on Saturday night is up. -Hansel

The 250SX East Region Championship leader, Nichols, is on fire right now. The Monster Energy/Star Yamaha Racing rider came into Indianapolis on the heels of a win at H3 and hasn’t lost a race since. Everything has been on point for Nichols, from qualifying to finishing the main events strong, and everything in between. He now leads Craig by 11 points with four races remaining in the East Region. If he wins again on Saturday he’ll not only sweep Indianapolis, he’ll strengthen an already tightening grip on the championship. –Hansel

Ken Roczen has really been putting his best wheel forward lately. He’s gotten good starts and has been incredibly strong in the beginning, and end, of the main events. As a result he’s won the last two races and holds a 13-point lead over Cooper Webb in second, and he’s got 14 points on Eli Tomac. Like Nichols, if Roczen wins again he’ll complete a clean sweep of Indianapolis while also padding his precious points lead. –Hansel

Justin Barcia didn’t win the race on Tuesday night, but he’s got to be happy with how things went. After winning the opener, the Troy Lee Designs/Red Bull/GasGas Factory Racing rider hadn’t even been on the podium since, but he got back on it with a second place at Indy 2. It had to be a bummer to see Roczen ride away from him, but he’s got to feel good about holding off Eli Tomac for much of the race despite the immense pressure being applied by the Monster Energy Kawasaki rider. Barcia has said he doesn’t want to be a one-trick pony this season, but putting together a string of podiums would be pretty impressive too. –Hansel

Trending upward is hard to do in today's 450SX Class, which is located in the deepest end of the talent pool, but somehow Aaron Plessinger seems to be doing it. The Monster Energy/Star Yamaha Racing rider has been inside the top ten in four of 2021's five races so far, and at Indy 2 he even matched a career high in the 450SX Class by placing fifth, something he's only done once before back in 2019 as the following week, he suffered a season-ending injury. Something seems to be working for Plessinger. Will his progress continue at the final round in Indy? -Hansel

Vince Friese has never been included in preseason title talk, nor is he considered a podium contender, but he's also a skilled rider, and is certainly better than his results have shown thus far. Need proof? In the first five races he's gone 16,15,19,17, and 19 for an average finish of 17.2. You'd have to go back to 2016 for a worse starting average from Friese, and that was the year he didn't qualify for round one following his dustup with Weston Peick. Friese is better than the scoresheet shows right now, and sooner or later it's going to show. -Hansel

When Dylan Ferrandis took second place in just his second ever 450SX race it sure looked like dominance he had in the 250SX class just might have some carryover in the premier class. However, since then Ferrandis has gone 12, 6, and 9. Those are solid finishes, but after getting on the box so early in his 450SX campaign, they're probably not what Ferrandis is aiming for. Will he get back on the podium at Indy 3? -Hansel

The 250SX East Region is decimated by injuries. This is the chance of a lifetime for privateers! Grant Harlan finished fifth on Tuesday. Fifth! Yeah, he was a lap down, but for the rest of his life, he can tell people he raced Monster Energy AMA Supercross and got a top five. Hey, for a lot of privateers, even a top-ten would be amazing, and this is their chance to get it. In a chaotic season, which non-household-name will get into the single digits? – Jason Weigandt

Here’s what we wrote about Marvin Musquin before Indianapolis 2: “The law of averages says Marvin Musquin can’t end up at the back of the pack on the first lap of every race, but, it still keeps happening. Well, it happened again! Marvin started Indy 2 in about fifth (after winning his heat race) but tagged Aaron Plessinger on the first lap and went all the way back. He later tangled with a downed Justin Brayton. Marvin has been on the ground at every race except the opener, when he scored a podium.” So, now we repeat one other piece from last week: Again, his luck has to turn eventually, right? –Weigandt