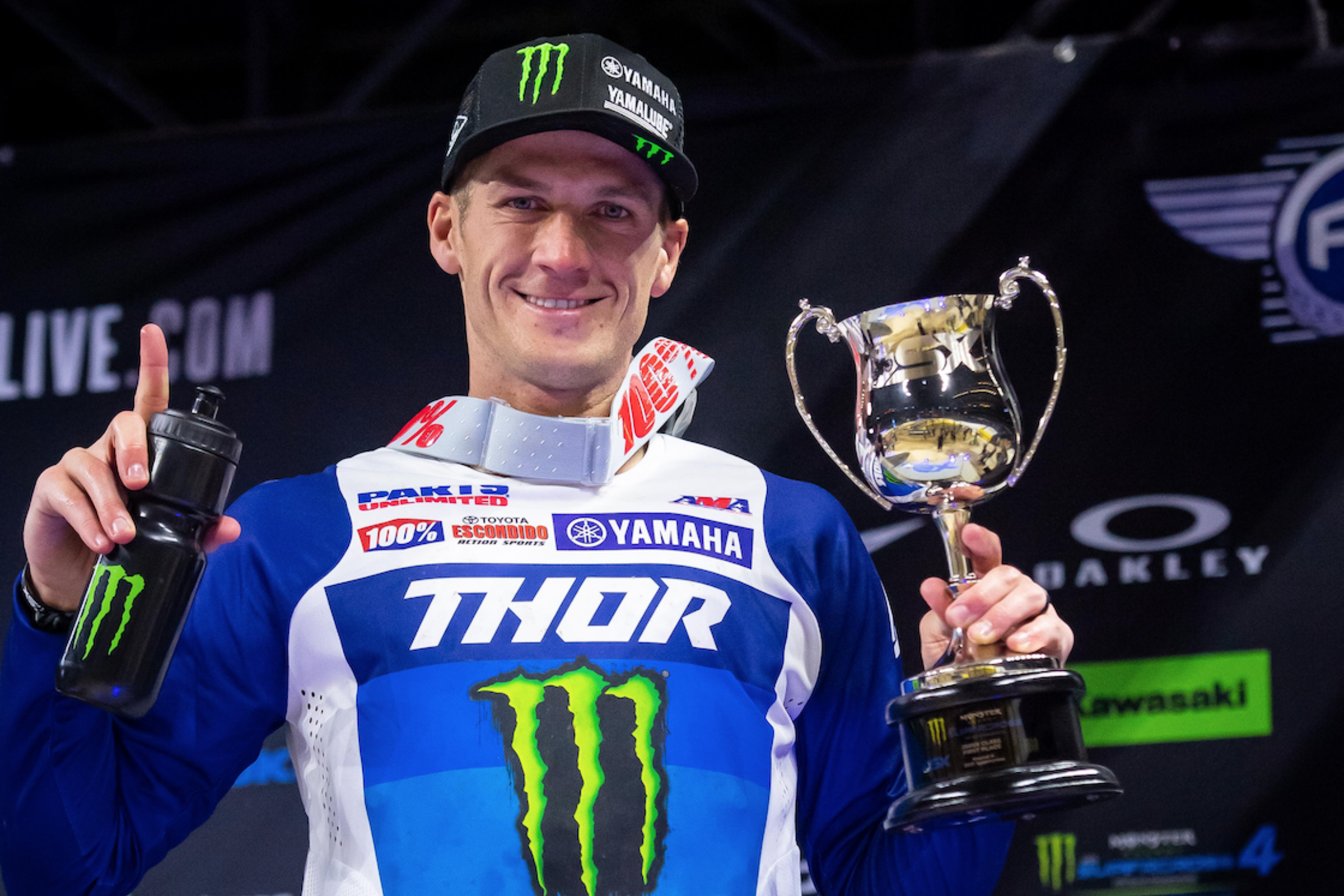 The 250SX East division was slipping away from Monster Energy/Star Yamaha Racing’s Christian Craig, as his teammate Colt Nichols was on fire with three-straight wins and the points lead. Nichols was fast again on Saturday night in Indy, but he went down on lap one of the main, and Craig pounced on the opportunity to take the win. That’s Craig's second victory of the season, and puts him just six points behind Nichols with three races remaining.

It didn’t look like it would be that kind of day, considering Craig missed an entire practice session due to bike problems. It all tuned out right when the main event rolled around. Steve Mattes called Craig after the race.

Racer X: Christian Craig, up and down day for you, but congrats on the win. Obviously Colt made it back on the podium, but you still made up some points. I wasn’t at the race, and I didn’t see much of you on TV, but good job.
Christian Craig: Yeah. I mean, it was a crazy day behind the scenes. To start off with practice, from practice one on, I just felt a little off. I couldn’t figure out the lines and I couldn’t find a flow. I was struggling all day. Then one of the practices, I couldn’t get my bike started and I missed that whole practice. Even in the heat race I was misjudging everything and figuring out the track still. So when we were on the line in the main event, I was like, “Okay, let’s give it our all and see where we go.” Got off to a good start, and either way, if I started behind Colt or ahead of him, I was going to do what I could to either put pressure on him or get away. Unfortunately he went down, but that helped on my end. I was able to spurt away pretty quickly once he went down. I broke away, then those lappers got pretty crazy at the end. It felt good, especially after a day like that. That one felt good.

Well, you had been losing points to Colt, then he catches and passes you in the heat race. You explained why, but still that had to be tough, mentally.
Oh gosh, yeah. Especially the way this series started off. I was qualifying up front and winning heat races. When he passed me and pretty much checked out, I was frustrated with myself. I told myself to have a clear head and move onto the main event. Forget about it and ride like I know how to. You never know what could happen if you put yourself in a good position.

Ultimately, look, you want to win the championship, but this has already been a success for you. You’ve won races. It’s good comeback.
Yeah, it’s been a success season so far, my best season to date. I’d say it’s way past due. This is where I should have been a long time ago. This is the way the cards played out. We’ll see how it goes. I’m in the title hunt and there’s three races to go.

The lack of depth in the class, it’s not these guys fault, they’re trying their hardest, but what’s it like with the lappers?
Yeah after the third round, you just have to expect it. It’s crazy! You get to the top ten, and these guys are battling for top tens. I respect that. They’re so pumped to get a top ten, so the last thing they want to do is slow up and let me by. You saw it in the 450 class, [Justin] Barcia lost a podium because of it. It’s crazy. I’m happy that at round one, when the lineup was stacked, I was able to come out on top. That gives me some confidence. I beat the best at round one.

[Laughs] Do we blame Jericho [mechanic Derek Rankin] for the bike?
Oh man, he was sweating it. Two degrees outside and he was sweating! Paige [wife] had to give him a bottle of water. Luckily we had two hours before the next practice, so it wasn’t like they were racing to get it done. He works hard, and he keeps me positive, so I’m pumped on him.

I’ll be honest, I didn’t like this track. I liked the long lap times, but that was about it. It didn’t look like it flowed very well.
Yeah, it was super tight, and as soon as I saw those whoops I was like, “Are you kidding me?” We have yet to get a real set of whoops. I actually watched the race from the last time they were in Orlando. I think it was ’07. I was watching it today. I wanted to see how it was. It looked hardpack and more like realistic supercross. I’m hoping we can get out of these tracks with softer dirt, and hopefully we have some real whoops, because I think that’s where I’m going to shine.