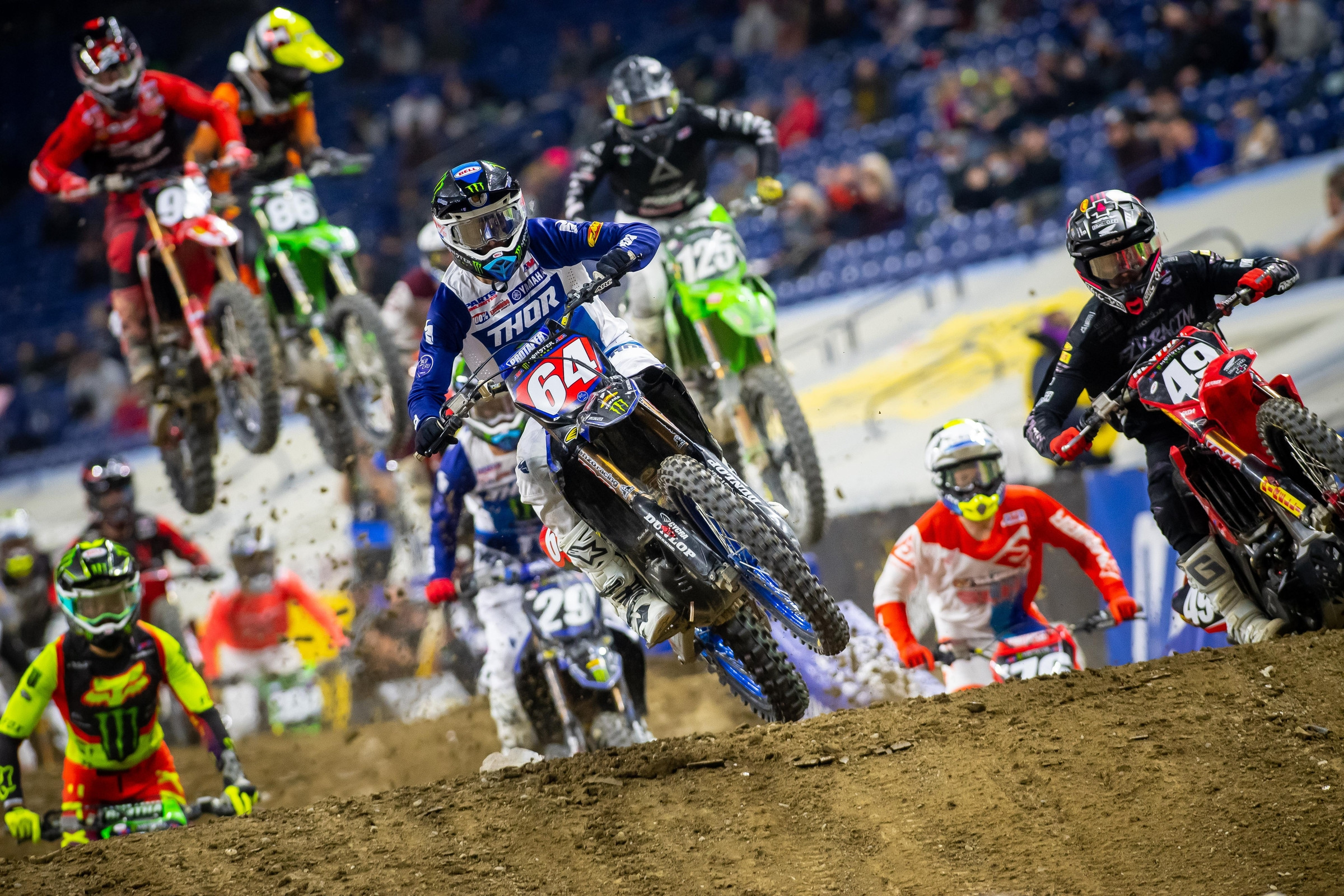 The third and final race inside Lucas Oil Stadium in Indianapolis, Indiana, has come and gone. With several talking points in both classes, we fired off questions to long-time pro Jason Thomas to get his insight on the action at the fifth round.

That’s the last right-hand first turn we expect to see all year and it didn’t go miserably bad for anyone in title contention. The lap times were about the same as the first two Indianapolis rounds. How do you think the Indy 3 track turned out?

Well, I think the timing for this design was critical. Had we put this track design into the Indy 1 date, it would have been treacherous. Giving the dirt a full week to dry allowed for a more technical layout. There were more rhythm sections than the previous two rounds and also more options in how to approach them. Overall, I really like seeing the riders challenged. The motorcycles these days are so incredibly capable and rider skill has evolved along with that. The tracks could be much more challenging than we typically see. That would be a positive change in my opinion.

A lot of guys were jumping the whoops on Saturday. Is this more because of the build of them and the settling of the dirt or the flat, wide 180-degree turn afterwards or a combination of both?

This was a direct result of the corners before and after the whoops. With a tight corner leading into the whoops, riders were forced to enter the whoops with much less speed than ideally desired. That lessens the potency for blitzing and opens the door for riders to jump the whoops. Notably, riders that prefer jumping whoops performed much better in timed qualifying (Marvin Musquin and Cooper Webb).

The flat corner after the whoops was also a factor. Those riders that chose to blitz ended up much deeper in the following corner than preferred. They would then be susceptible to a rider diving underneath them and blocking their line at the corner exit. There was also a nice inside rut for those that were jumping to dive into. The blitzers were forced to slide around a flat outside line with no real pivot point.

Colt Nichols coughed up the lead with a mistake that sent him flying onto the tabletop section without his bike underneath him. Was it a mental error, or was he overriding trying to push the tempo so quickly? What caused him to go down?

Yeah, just a small mistake that had a big penalty. I believe he was trying to push the pace on the opening laps so that he could manage the race from a comfortable position in the second half of the main event. Pushing the pace is not without risk, though, as Colt found out. This is the norm in modern day SX racing so I don’t blame him. The pace at the beginning of any main event is at an all-time high and with the championship lead, it’s logical for him to check out early and manage risk and effort later as needed. It just didn’t quite go to plan this time around.

Jett Lawrence wasn't going to make it easy for Nichols to pass him as the Australian pulled several tricks out of his sleeve. It worked, as he held off Nichols for a few laps. But somehow the duo was still able to charge forward past Mitchell Oldenburg! From the perspective of both a rider and a fan, what were your thoughts on the racing between Lawrence and Nichols?

I thought it was a bit early for those games. They still needed to catch Oldenburg and continue chasing Jo Shimoda. If it was the last lap or two, I can appreciate the tactics but when there are still positions ahead to be gained, I would rather race forward.

First we see a light on his handlebars and now tape with the phrase, "NO EXCUSES." Christian Craig is still in reach of the 250SX East Region title, down only six points. But can he mentally stay in this title fight?

He definitely needed round six to go the way it did. If Colt ran off with another win, I think this would have been all but over. Now, Christian has new life. He’s still down six points but it certainly feels like the door has been reopened. As for the “mental” aspect to the question, I think Nichols has shown lately that he is just faster than the rest of the field. The mental games don’t matter if you are just getting beaten outright. That’s the part of the equation that Christian had dialed at Houston 1 but hasn’t quite had since.

Jo Shimoda said he earned that podium ride. He’s progressed a long way from his rookie season last year. Is there still room for him to progress or are Nichols and Craig (barring a crash) just on another level right now?

He can certainly get better. He has improved greatly since we saw him last June in SLC. I think he has a way to go in regards to beating Nichols straight up but he’s young and has time for that. The biggest key is to continue progressing which he seems to be doing.

The lappers were tough to navigate once again. Is there anything that can be done about this going forward?

I am sure there are ways to address this but it’s been going on for decades so I doubt anything significant is on the horizon. As a lapper, the most important thing you can do is to hold your line. Don’t drift in either direction, don’t do anything erratic, and make all of your moves predictable. If the leaders can correctly predict where you’re headed, they can make appropriate moves to get around you.

There's a lot of races left but is this third consecutive win from Ken Roczen a statement in this #stacked field?

I think three wins in a row is a pretty significant statement. We could be very easily be looking at four in a row if you want to revisit the Deano fiasco. He has all of the little details sorted out and that’s showing up in the results column. If he continues to put himself at the front on the first lap, these other guys are in for a serious challenge if they have title aspirations. If I'm Eli Tomac or Cooper Webb, I'm most worried about how comfortable Roczen looks. I would be doing everything in my power to change that starting Saturday.

Were you surprised Roczen was able to keep Cooper Webb at bay late in the race?

No, but only because Webb arrived so late. Had he gotten to Roczen with 7-8 laps left, I think he could have had a real shot to pass. Pressure builds over time and wears a rider down mentally. With Roczen really only dealing with pressure for the final 2-3 laps (and not much then), he didn’t have to worry for long. That constant threat of a block pass, the constant sound of the engine behind you, and the forced defensive riding takes a toll once the gap gets within a second or two. With Webb lurking 2-4 seconds back, Roczen got to ride freely in the line he wanted.

Do you want to touch on the Vince Friese-Justin Barcia incident at all?

I would suggest listening to the Fly Racing/Racer X Review Podcast that Steve Matthes, Jason Weigandt, and I recorded just after the race. We talk about it for a solid 30 minutes. Thanks, Steve!Past that, the only thing I would mention is that I don’t think it was anything intentional. Whether or not you want to say that Friese should have given up the race line, that’s altogether different. Under any circumstances, though, you absolutely can’t drift (in the air) when around the leaders. Every movement has to be telegraphed so the leader can make a plan for when and where to make the move. Drifting mid-air is the exact opposite of that.

Listen to the Fly Racing/Racer X Review Podcast below: