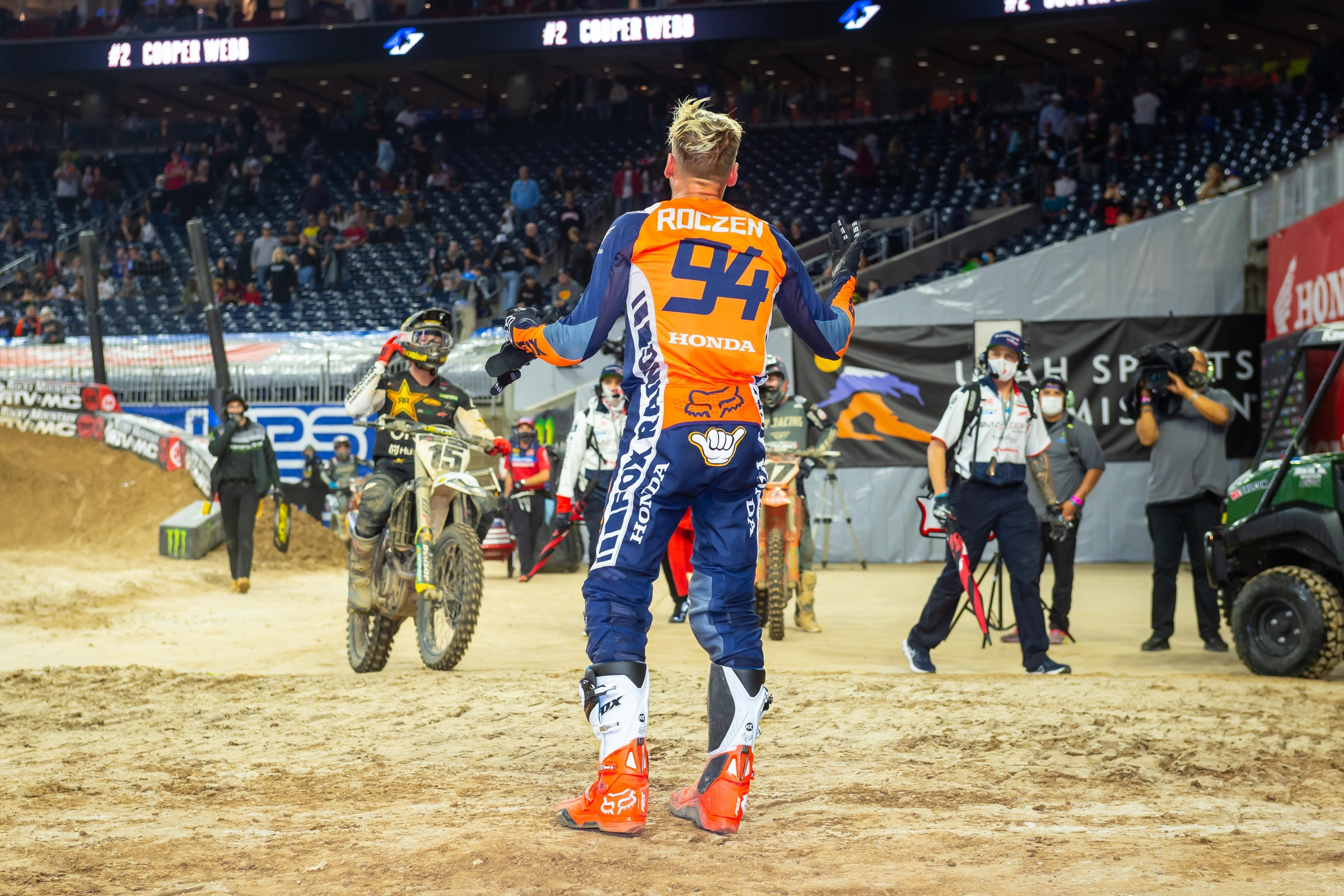 The Moment It Happens

I have an aversion to conspiracy theories, because I have another theory that is much more powerful. When stuff gets screwed up, strange or weird, it’s usually because someone messed up. Maybe they were too busy, too tired, too disorganized or perhaps the whole project was poorly managed, poorly staffed or poorly funded. That’s usually why things go wrong. In your daily life, you’ve surely witnessed more things go wrong through mistakes and incompetence than evil master plans that were executed to perfection.

That leads us to Dean Wilson and Ken Roczen on the final lap at Houston 3. Dean messed up. That’s the whole story.

Roczen started creeping up on Wilson as the white flag came out, and it eventually became obvious he would have to lap him before the checkers came out. It was also obvious that Dean would realize the leaders were back there and would move over. Sure enough, as they headed down the start straight, Wilson came out of the right-hand bowl corner a little on the inside, on the right, and Roczen went a little wide, on the left, anticipating that Dean would just stay right, and open up the inside in the next left-hand corner. It all looked normal and okay until….Dean moved back left to cover the inside!

Now we were headed for trouble. Four seconds after Wilson moved back to cover the inside, Roczen bumped his rear tire. Three seconds later, Roczen was getting block passed by Webb. In seven seconds, Wilson ruined Roczen’s race.

Check out the highlights below at the 2:17 mark.

“It was an honest mistake, I didn’t know it was those guys behind me,” says Wilson. “What happened was, Dylan Ferrandis had just went down, he got up and I got right in front of him. It was two laps to go and he was charging to get back past me. I could hear Ferrandis behind me. So then he must have got the blue flag. I also got the blue flag but I didn’t see it, obviously. I thought it was Ferrandis behind me. I messed up. It sucks big time—I understand everyone is pissed and I would be pissed if I were Kenny, too.”

What’s crazy is that Webb’s block pass on Roczen slowed them both so much that Wilson pulled back away and never got lapped. So, even over the final half lap, with Webb and Roczen in full send mode with a race win on the line, they never caught back up to Wilson! Dean stayed ahead of them and took the white flag before Webb took the checkers (as you can see in the highlights).

(Wilson flashing across the line just before the race winner might be the reason his transponder didn’t fire on that final lap, and he was temporarily scored in 17th place. This led to rumors that he was getting penalized, but that wasn’t the case, it was just a transponder error. Wilson visited the AMA race hauler and they resorted to manual scoring, which put him back to 11th.)

We’ve been talking so much about the parity of the 450 class, and while this is a story about a dude going a lap down, it’s also a story that says the 11th-place guy in the 450 class is fast and fit enough to where the race winners can’t catch him in half a lap if they slow each other down in one corner.

“I shouldn’t be getting lapped, but I have a guy who got a podium in the last race [Brayton] in front of me, and a guy that got second at the last race [Ferrandis] behind me, and Marvin [Musquin], who podiumed the first race, behind him,” explained Wilson last night on the PulpMX Show. “It sounds so bad but the class is just that gnarly.”

Watch Dean’s full interview on episode #452 of the PulpMX Show at the 29:16 mark below:

Roczen was livid and actually went to the side of the track to yell at Dean—but because Dean had just taken the white flag, he was actually still riding, so there was Ken on the side of the track yelling while Dean was still racing his final lap. This really happened. When Wilson finally did take the checkers, Roczen yelled at him again as Wilson was headed to the tunnel and the pits.

Ferrandis crashed at the end of the rhythm section with the on-off tabletops, and his Yamaha was temporarily upside down on the tough blocks. He got back up right behind Wilson. Ferrandis moved over before the whoops to let Roczen and Webb lap him. Roczen filled right into the spot where Ferrandis was—right behind Wilson. Dean figured it was still Ferrandis right there, trying to pass him.

Still, blue flags were waving, and the likes of Ferrandis, Kyle Chisholm, and Justin Bogle moved out of the way for the leaders. There’s no excuse for Dean not to move, he simply screwed up. But this was a heat of the moment scenario, not a master plan to block another rider.

“It sucks, even as a fan, seeing a lapper get in the way of a leader of a race, that pisses me off more than anything,” he says. “I can’t believe I’m even in these shoes, and this happened. I’m angry at myself.

“He [Roczen] was on my flight coming back, of course, so I just went up to him like a man and said, ‘Man I can’t say sorry enough.’ I don’t expect him to be my buddy—if it happened to him I’d be way more mad than even he was. I have a bad temper!”

After an incident like this, pretty much everyone has a bad temper, although Roczen tried to cool the situation as best he could on the podium. Kenny has reason to be frustrated. A four-point penalty for jumping during a red cross flag on Tuesday combined with the last-lap loss on Saturday to net seven points reduction in championship points. He’s still the series leader, but he could easily be 10 points up on Cooper Webb. Instead, he’s just one point ahead of Webb, who gained three points just as Roczen lost three with that fateful last-lap pass for the lead.

It’s been a close season of action so far. If you’re Roczen, you just hope it’s not so close that a few lost points cost you a championship.