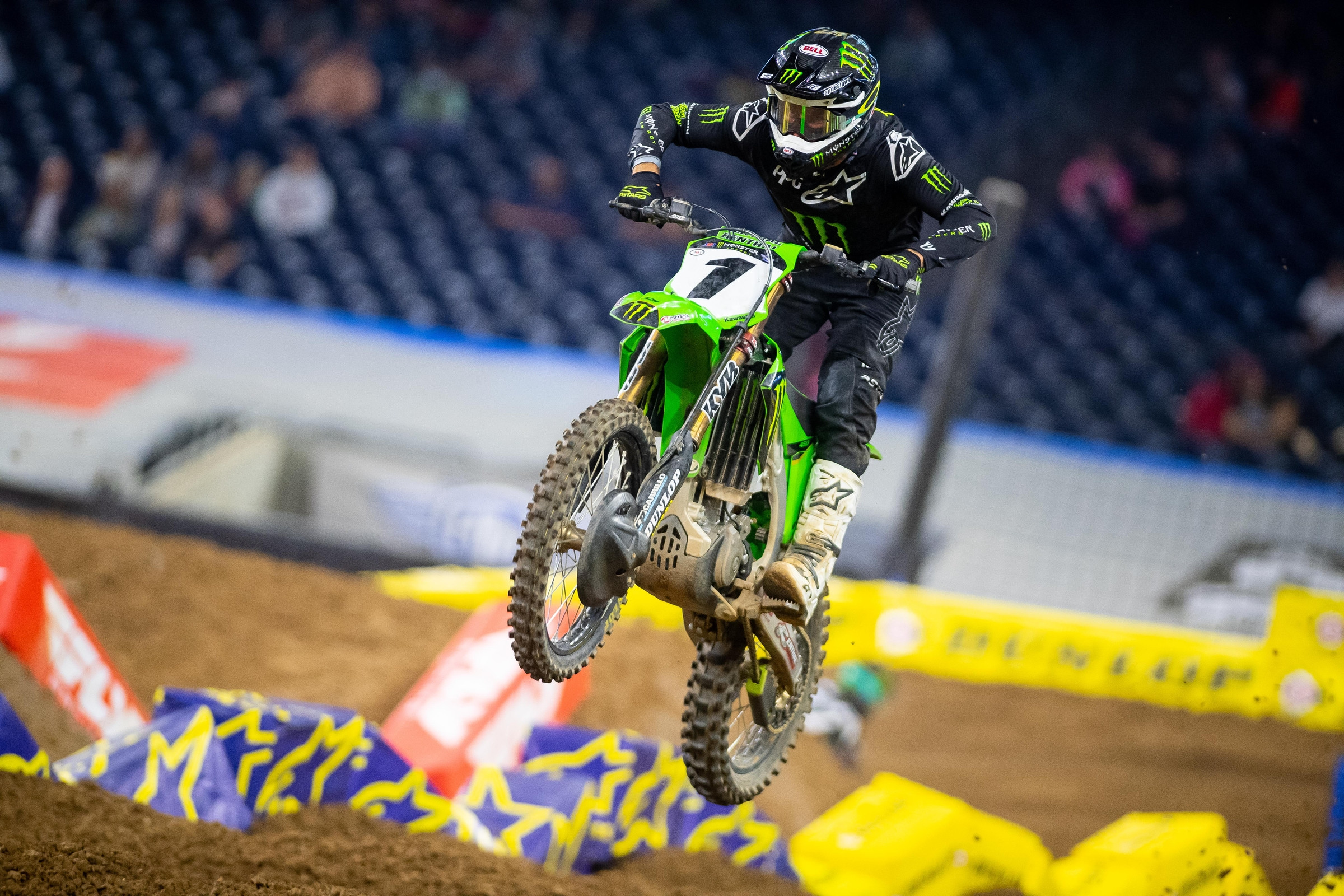 Indeed. For the umpteenth time we can again call off the alarm on Tomac, who was 13th at Saturday night’s opener and then won round two on Tuesday. It wasn’t easy, though, as Tomac had to deal with super fast kids Chase Sexton and Adam Cianciarulo early, then Zach Osborne and Dylan Ferrandis late.

He talked about it with the media in a post-race press conference.

Racer X: Eli, you obviously saw the crash that happened in front of you. But once you were out front did you have any idea of the chaos behind you? There was a lot going on in that main event. Were you aware or where you in your own world?
Eli Tomac: Mostly in my own world. I was aware of the guys behind me, but the stuff up front, it was wild to see two crashes in the same spot, right? I mean, the sand, there was almost like a little rut or edge that was hiding there and it bit both Chase and Adam that way. So that was a gift that way. Then it was trying to maintain. I was kind of pacing myself. Zach was coming in strong, too. I tried to go harder. I was like, I have got to get going, he’s catching me. Then he made a mistake. Then Dylan was coming on strong, too. It was one of those night’s where clean air was huge that way.

Were you worried at all? You were pretty good in practice today but you weren’t top of the board. Obviously I’m sure round one was a disappointment. Were you worried at all, or did you feel like everything was under control?
I was stressing out, to be honest. Sixteen points is horrible after round one. That’s a terrible hole to be in. I was pulling my hair out all day, even in practice. I was still a little bit behind. I practiced better at round one, but then obviously we had different results in the races. I was pulling my hair. Then that was so huge for us. The start was so huge for us that time. We needed that.

It’s gotten to be fairly cliché to say this field is so deep, but right now we’ve got a whole lot of healthy guys. Is it possible that we could see huge turnover from week to week on results? It’s quite a bit different from the result on Saturday
Yeah, that is the truth. It’s said every single year that way, but it’s going to be hard to come through the field this year. Really hard. Especially if we keep all the guys in there. It’s tough. Everyone is getting a little bit faster and everyone’s getting a little bit closer to each other. If you just look at the times in practice, how close tenth is, everyone is on the same second. If you look down the list it’s like 12 guys who are in the same second. In the past there were maybe two or three guys that really were at the next level. So as we saw tonight, a whole different podium. So that could easily be the case this season.

You said that you were pushing the pace there at the halfway point of the moto, and that was pretty true because we could see your bike starting to smoke and everything like that. How much did the pace change when you knew that you were going to do 29 laps tonight? Was that something that you guys had in mind?
All I know is the opening laps were crazy fast. Chase was going really fast. Adam was going really fast. I’m just like, this is going to be insane for 29 laps. They both made mistakes. That pace was pretty wild early on. Then in the middle it was kind of like trying to manage Zach. He was creeping a couple tenths a lap on me and I couldn’t really figure out where I was losing the time. Then I got to four or five minutes. I shouldn’t have said halfway. I should have said like five minutes left. I’m like, all right, I have to go now, and I pushed a little bit harder. That’s what really got me through to the end.

Any changes to the bike from round one to two for you, and what did you change and how did it help?
I made a fork change between round one and two. That was it, really. Just fork change and trying to figure out some things, why I rode so poorly and really just terrible at round one. I got some comfort back and that was it. Just looking for that whole moto comfort.

Will you ride this week?
That’s weather-dependent, and finding the right spot to ride. We’re just watching the weather.