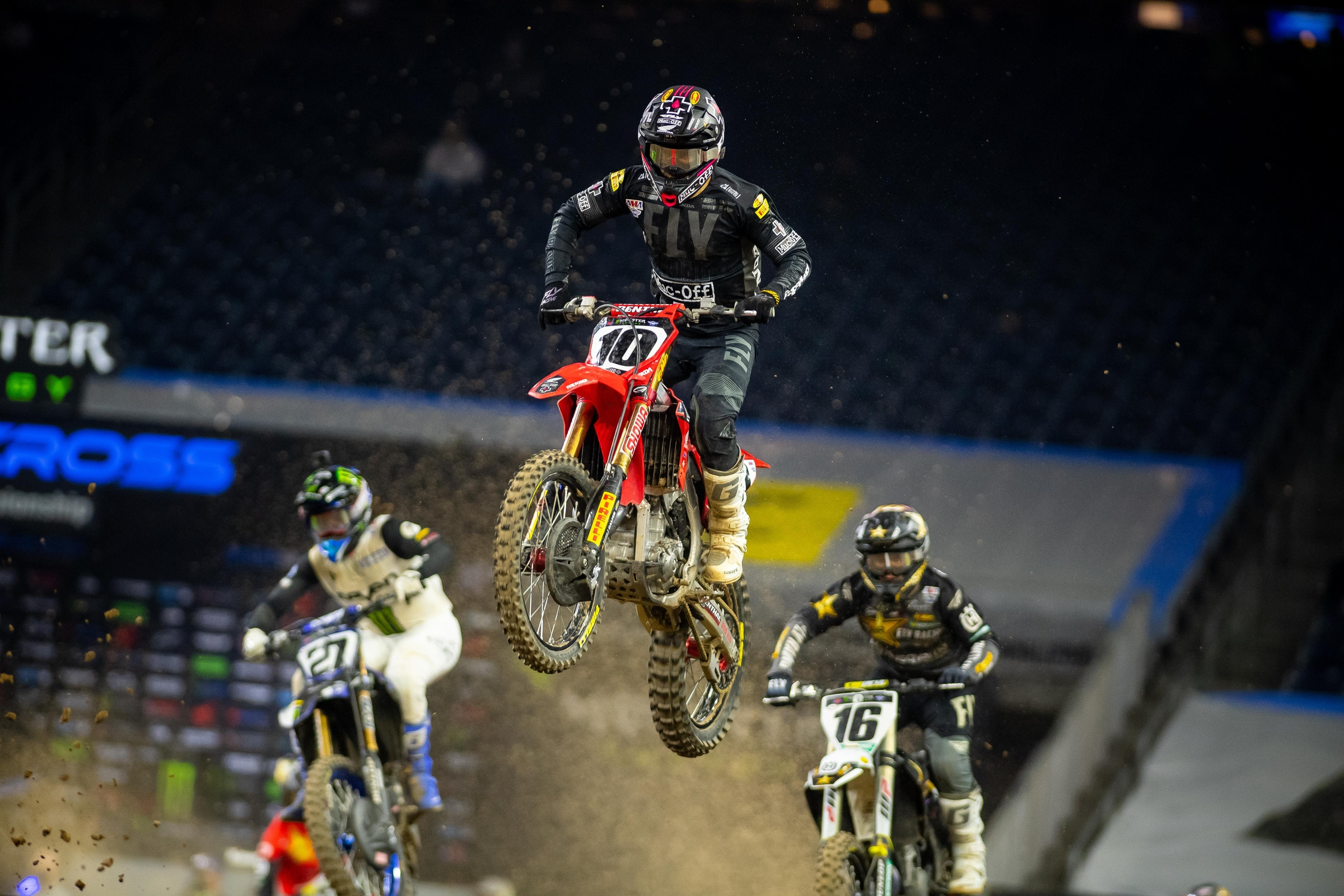 In a deep, stacked, loaded field, somehow 36-year-old Justin Brayton, on his new Muc-Off Honda team, emerged with a podium on Tuesday night in Houston. Brayton got a good start and hung tough, spending the second half of the race under attack from the likes of Ken Roczen and Cooper Webb. Dylan Ferrandis got by him when Brayton almost went down in the whoops, pushing him back to fourth. He got a gift when Zach Osborne went down in second, and then he held tough under fire to hold onto third.

He talked about it in a media conference after the race.

Racer X: Justin Brayton, congratulations on being back on the box. That’s incredible. You’re representing the old guys. You don’t know how much that means to me. You bounced the bike off your chest today, somehow. You fall off Ken Roczen, Cooper Webb, got back on the podium. What does this night mean to you at 37, 38 years old?
Justin Brayton: I’m not 37 yet. I’m only 36. I’ll be 37 in March. These are so hard to come by. I don't care who you are. A 450 podium in this field. I’m sure nobody expected me to do this, especially at round two. Even doing what I did at round one, I think it surprised a lot of people. For me, this new Honda is awesome. Being with some familiar faces with Yarrive [Konsky, team owner] from Australia. I’ve been a part of that team now for four plus years. It’s just fun. We’re a smaller team with a big effort. It’s rewarding to get it done. Like I said, it’s hard to come by. We’re definitely going to enjoy it.

Watch the full press conference from the Houston 2 Supercross below:

You flipped Vince’s bike away in that heat!
That was bad. It bent my cross bar really bad. Thankfully it didn’t hit my hands or anything. That would have been a recipe for a broken hand. That was crazy, a bike flipping right into you across the track. That’s not a good sight.

Take me through the mistake in the whoops. You hardly ever have problems in the whoops. And then how were you able to recover? Ken and Webb were all over you, but they didn’t get you. So just take me through that final half of the race.
That was a huge mistake. It was my strong point all night and I wanted that to continue. Most guys were kind of just going down through the middle rut and I was like, I want to figure out a different way to not do that. You would just kind of labor through the middle and it was easy and somewhat fast, but I knew if I could go down the left side or middle left and really attack them, I thought I could make up some time. The rest of the track it was difficult to make up time, so I wanted to kind of pick my spot there. I just caught an edge and I swapped. I’m sure the finish line flagger was probably a little nervous. I was left and right. I didn’t really know who was behind me. I knew there was several guys there. I would kind of gap them, then they would close in on me. The biggest thing that changed my race was when I started tripling from the inside out of the sand. Dylan passed me there. Once I started doing that, I think I was able to manage Ken and Coop behind me. But thankfully I didn’t go down in the whoops. That was a big moment.

How much different is your mindset this season being on the team that you’re so familiar with? Last year you were teammates with Kenny [Roczen] at the factory team, whereas this year it’s all on you in terms of the 450 results. So, how is that for you? Tell us a bit about the reaction once you got on the bike.
It was amazing being at Honda. That’s a lifelong dream for a lot of people. Going to the team, I didn’t really know Kenny that well and didn’t know how we would get along. He’s one of my best buddies now. We really struck up a great friendship. I think my starts really struggled last year. I think that was a huge part of it. I don’t have the blazing speed to come from 12th to third, or 12th to win a race. So I really need to get good starts, execute the race, have my strengths really play toward the whole main event, and I didn’t have that many of those last year. I came out firing at the first race with a heat win at Anaheim 1. Then it was just kind of okay. Then I broke my hand at Daytona, and then with Salt Lake… I just never quite jived with running that pace up front. It seemed like I was just off a few tenths all the time. This year I spent a lot of time in North Carolina preparing, and then I went to California about three weeks ago and did my final prep with Ken, and that really helped my speed. I was off of him almost a second when I first got to California. By the time we flew to the race, it was nice because I had closed that gap. He’s one of the fastest guys on the planet, so to be able to have a friendship like we have and also for us to ride together quite a bit was really cool. I learned a ton from him. This 2021 Honda 450 is amazing. It’s a really good bike. So I think it’s a combination of all that and here we are.

Seeing Yarrive, your team owner, at the podium and he’s walking around, he’s got tears in his eyes. This result meant a ton to him. Can you talk about that a little bit? I know coming over from Australia to race here, it’s a huge deal.
It is. It’s massive. Yarrive and I have worked together now… I’ve rode for him for four years in Australia. We just really hit it off. I love how passionate he is. It’s motivating for me, it really is, to do it for a guy like that that puts his own money in the team, and then now he’s over here ultimately living his dream, having a supercross team at a high level. So to get a podium in our second race together, it’s unheard of really, like a privateer team. We obviously get a lot of help from Honda, but it’s really cool. We’ve talked about it for a long time. Every time I’m in Australia we’re like, we’ve got to do a team together at some point in America, and here we are. Who would have thought that he’d have a podium to his credit the second race in? So it means a lot to me to get him that. We’ve become really good friends. I’ve got a huge part in this team with a lot of time invested and a lot of hours of phone calls and stuff behind the scenes. I love being a part of it that way, and he allows me to be really hands-on. He’s a racer, so it’s cool. It’s really cool. I love seeing tears in his eyes. These things, like I said earlier, they’re so hard to come by. To do it is pretty cool, especially at my age. Nobody would have thought it. The most common question I get is, “When are you done?” Super cool that we’re racing together and doing as well as we are so far.

How do you feel about these first two rounds compared to Salt Lake City as far as atmosphere, racing, all of that? We have some fans here in Houston, but not that many. How is it compared to Salt Lake?
Definitely more of a supercross vibe than Salt Lake, for sure. Salt Lake, a lot of the mask stuff was new. It was like an eerie feeling because it was an outdoor stadium with no fans, where here we’re in a dome, there’s fans, you can hear people cheering. When Christian [Craig] was on the podium on Saturday it sounded like there was a lot of people in the stands cheering for him and stuff. So this definitely feels more normal, but not even close to what it was. Now we have opening ceremonies so you get the nerves going and the jitters going. In Salt Lake we were sitting on the starting line and you could hear the guy ten gates down, you could hear the conversation they were having. So it was a little bit strange, for sure. This is definitely more normal. I think the dome helps as well, just having having racing inside a stadium.

You guys rode 29 laps today. How did the track change during the main?
It changed a ton. The first race here in Houston on Saturday, I saw them prepping. They prepped pretty much every corner. So the beginning of the race is just a full sprint. The first ten laps are so fast, so that’s why a good start is so critical. But by the end of the race it’s completely hammered. The turns, there’s four, five, six ruts in each turn that are super choppy. So it definitely gets really chewed up. The dirt here in Houston is actually really good. It’s nice and soft, so it makes the track go away even more. It just makes those initial laps so much more crucial, especially when they prep it. But if they didn’t prep it, it would be slot car racing and the racing would probably be not very good. It goes away that many laps. I don't know exactly how many laps we did. I don't know if it was 29 or 30 or how many, but it was a lot of laps. When you see lap times in the low 40’s, it’s going to be a lot of laps.