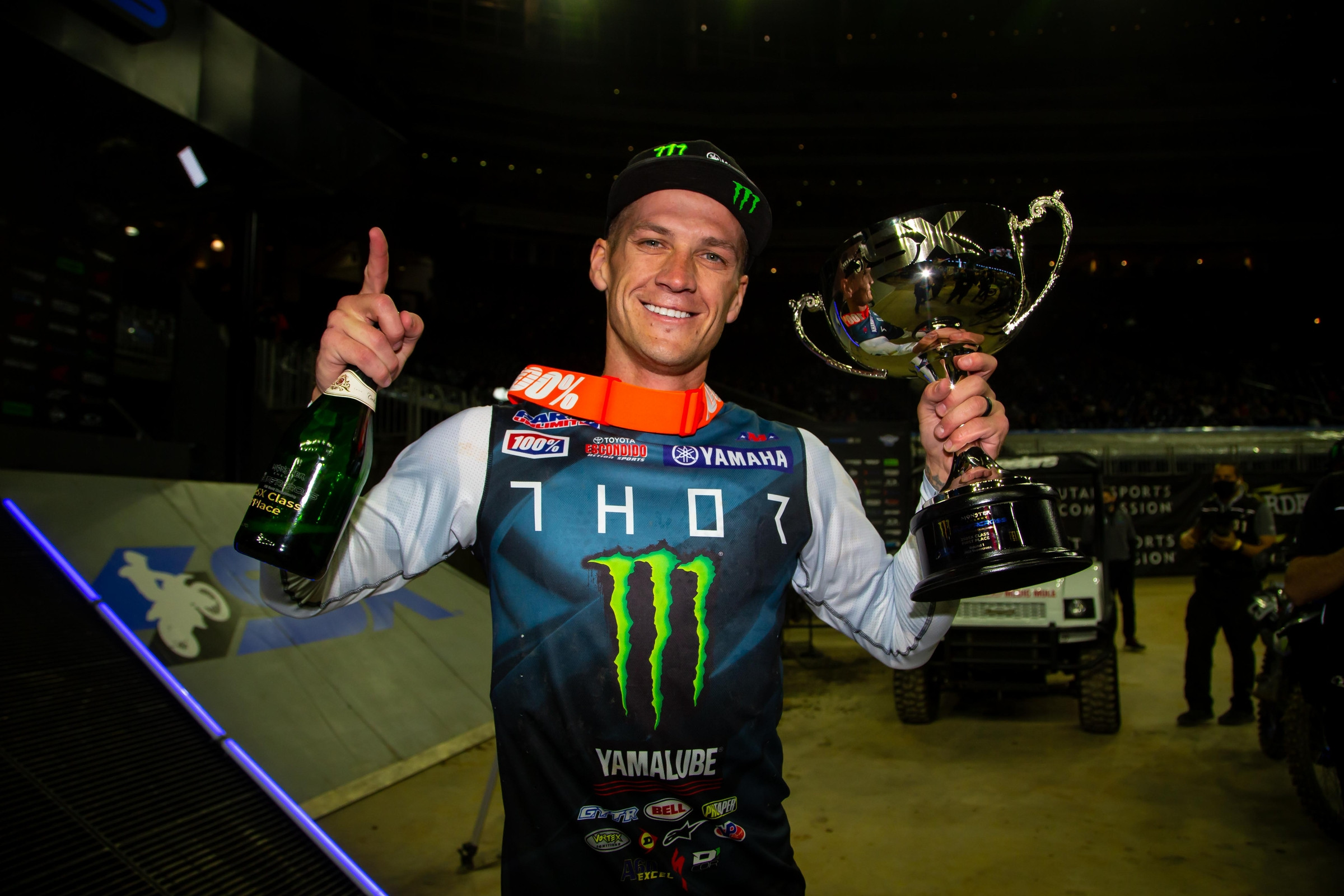 On a crisp February night in Glendale, Arizona, five years ago, Christian Craig outdueled Cooper Webb and Joey Savatgy to claim his first career supercross victory. At that time, it would have been nearly impossible to predict Craig would endure a rough train of injuries, a suspension, and a half decade wait before he’d win again. Saturday night in Houston, Craig once again tasted the winner’s champagne after winning the opening round of the 2021 250SX East Regional Championship, and also his first race as part of Monster Energy/Star Racing Yamaha.

Craig spoke with the media following his emotional win.

Christian, just a great night, a great day all around. On the ground next to the podium, I got to talk to you after the heat race and you had this like laser focus. I could tell there was some intensity. There was a lot of purpose with the way you were riding today. Take me through the entire day and where you were leading up to that main event. Then of course when you cross the finish line and the fireworks go off, just how that emotion just completely shifted when you got it done.
Christian Craig: Just the whole day was good, but I’ve had so many of these days. Everyone kind of knows my story if you’ve followed it. I can qualify good. I can win heat races, but then something happens in the main. I make a mistake, I get a bad start, I tip over. Just something that I can’t control sometimes. But it’s kind of like I had this chip on my shoulder today, and I still do. It’s not like I got rid of it. Just something that I needed to prove to myself. I do believe in myself and after the off-season that we had there was just this chip on my shoulder. I just felt it all day. I was flowing. It was awesome. When I crossed that finish line, just so much emotion. It kind of took me back a couple years when I was struggling and going through the whole FIM thing. It was so easy for me to just give up and call it a career. I’m happy I stuck into it. I’m just going to keep this going.

Typically, you guys would go home and get some recovery time but we’re going racing again in a couple of nights. Obviously, you did it a little bit last year. Does it feel good that two more days and we do it again, or do you kind of wish that you had a few extra days, and it was maybe not until next Saturday?
I’m all for this schedule. We’ll chill for a couple days. We’re going to probably do some Zwift’s, nothing too crazy. It’s more just recovery and chill and hang out with the kids tomorrow and get back to it Tuesday. I’m excited. I think it’s a cool schedule and it’s going to be a little bit different track. Hopefully, they make it a little more technical. It was pretty basic tonight. You had to be aggressive to make some passes. I was aggressive with RJ [Hampshire] in that heat, but that was kind of the only way to get around with two laps to go. I’m looking forward to it for Tuesday.

You really seemed like you wanted to establish yourself even in practice. You were trying to be the first guy on the track and then I know you said you had some aggressive passes with RJ. Maybe that was just because of the track. It looked like you were really trying to establish a tone. Did you feel that way?
Yeah, but that’s something I’ve always done. I’ve always wanted to go out first. That’s been my thing. Try to get out front and kind of race those opening laps and just get that feel of the race pace. Last year I got pushed around a lot and I’m older in the class, so that shouldn't be happening. I should be taking advantage of these young kids making mistakes or be smarter than them. I did it in the heat race and made an aggressive pass. Didn’t mean to hit RJ, but there was only two laps left and I had to get through for that heat win. I set a tone from practice one on. It’s always the plan to get up front and set that pace.

I’ve never seen anybody more self-aware of their motivations. You were talking about proving these haters wrong and maybe over what you’ve gone through these last several years. Who are you talking about?
There’s a lot of people. I can call a lot of people out, but I just use that as motivation. I hear it on podcasts. I hear just little chirps here and there. It used to bug me I would say back in the day. Nowadays I use it as motivation to just kind of prove them wrong. It wasn’t like hating, or haters. I feel like I got written off last year. My results weren’t that great, so whatever. That just lit a fire under me, I would say. I just turn it into a positive. You can’t please everyone. There’s always going to be people that are doubting you or hating on you. That’s just part of it. As long as you are doing your job and winning, that’s all you can do.

You mentioned about just having the fans back and everything and the struggles that you’ve been through the last couple years. What does it mean to you to have your biggest fans back, your family, with you on a day like today?
It’s awesome. I have the whole family here. It sucks that the kids can’t come to the race. Jagger would have to be tested if he wanted to come to the race and I’m not going to have that happen. They've got to stay back with the babysitter, but the wife is there. Just the support is awesome. It’s still not fully back to normal. Yeah, the fans were awesome but when I go to the podium, I want my wife there to celebrate, and she wasn’t down there unfortunately. But we’re making steps in the right direction. Supercross and Feld is doing an awesome job with just bringing back fans at all. I enjoyed it.

Christian, listening to Kenny [Roczen] and Justin [Barcia] talk about patience and all that, there was a point early in the 250 main where you and RJ were pretty much side by side in the rhythm section after the whoops. You guys were going for it. There was no backing off, no patience there, I don’t think.
You can’t really compare the 250 and 450 class. A lot smarter riders in the 450 class, and they set up passes. You know when you’re going to get passed or when you’re going to pass someone, where the 250 class is a little more wild. You’ve got the young bucks out there that have a hard time dealing with getting passed. I knew RJ was going to be tough. He’s fast. He’s been fast for a year. So, I knew I had to make quick work and get by him on lap one, and that’s what I did. I made fast work and I tried to break away as fast as possible because I know he was looking at that 29 machine after the heat race.