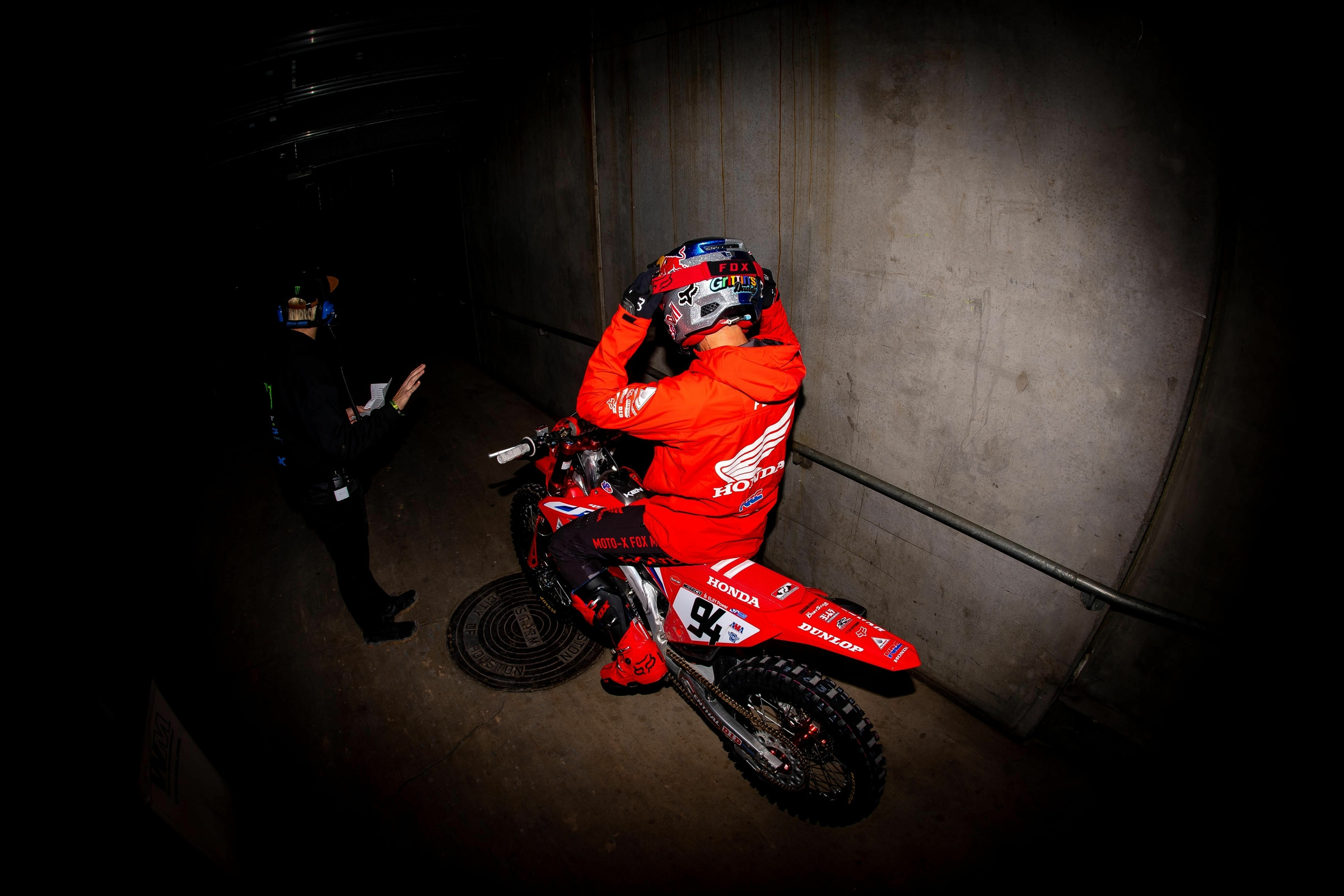 Fast forward to today’s Monster Energy Supercross tour, and the now 26-year-old Roczen is rounding into a roll as veteran figure, with a completely different outlook on racing and life. Kenny was quiet during the off-season, until late in the game when he appeared in two very non-adversarial situations. First, he was riding his Honda at the TLD test track—operated by the KTM group—with riders from other brands, like Justin Barcia and Jason Anderson. The real whopper was seeing he and long-time rival Eli Tomac flying private together to Houston, both holding their new babies on their lap. This Kenny is no drama, no stress, just enjoying life and everyone around him.

“Times have changed,” he says. “I think a lot of us are starting to put their egos down.”

We could roll out the standard “now Kenny is married and has a child” cliches and they probably do apply here, but with Roczen you must also account for the massive ups and downs he’s experienced throughout his career. It’s all served up a different mental outlook, and where at once Kenny was the attention-garnering lightning rod for the series, he actually spent much of his off-season well outside the social circles, quietly working his way back into shape.

“My off-season was super mellow and low stress,” is how he explained his prep for 2021.

Instead of engaging in the daily mock-racing motos in Florida, Roczen took his return to action slowly after skipping all of Lucas Oil Pro Motocross.

“I spent my whole off-season in California, not surrounded by a lot of riders,” he says. “I didn’t have to be on the stopwatch every day. I think that helped me. Since I didn’t race outdoors, I took quite a bit of time off, and to come back from that it takes quite a bit of time. As racers, you try to come back right away, you want to be good right away, and then ‘Why are the other guys so good?’ Then you get winded, and that’s all completely normal, that is the whole point of letting your body rest. You just let your body build up slowly until the first race.”

It’s a great plan but it’s hard for riders to actually stick to it—competitive athletes can go crazy knowing there are others that are probably going faster, who are stronger and in better shape during the off season. It’s hard to trust that when it comes down to race time, you’ll be fine.  But Roczen has changed his approach. He’s not aiming for any specific result. He’s no longer trying to craft the storybook ending of his 2017 crash, which requires a supercross championship to be complete. He’s just trying to enjoy life and whatever comes with it, on and off the track.

“Like I said, I just changed my complete outlook on the whole racing side of things, so I really just tried to race today and enjoy myself,” he said. “That’s exactly what I’ve done. So, I’m really over the moon with tonight.”

The last few years have certainly beat Roczen down physically, which of course led to the same, mentally. Last year he said he wishes he could just get back to the point where he won or lost races because of what happened on the track, straight up, instead of having his day decided by how he felt, physically, when he woke up in the morning.

“I did a lot of different work this year compared to the past years,” he says. “Different structure. We’re kind of just moving some things around, learning a lot of new stuff. I think it’s overall paying off.”

That’s just the physical side, though. Where the physical issues dragged him down mentally, it’s also safe to say stressing over things mentally and emotionally probably brings his body down, too. This new outlook certainly keeps the stress at bay. Even a good result at round one—which once again sets him up to play in a high-stress championship hunt—has to be taken in measured tones. He’s right in the fight, but he’s trying to ignore that. Even during the week and during the off-season, he no longer felt the need to ride motos with others every day. He’ll worry about that during the real races, on the real race days.

“I’m just better off doing a little bit of my own thing and kind of just pick my battles and get some confidence, and then we race enough when we get to the races,” he says. “That’s my theory behind it.”

Super mellow, no stress. This could be a better recipe to collect the ultimate prize—and only then, if he actually gets it, might we see the real emotions come out.