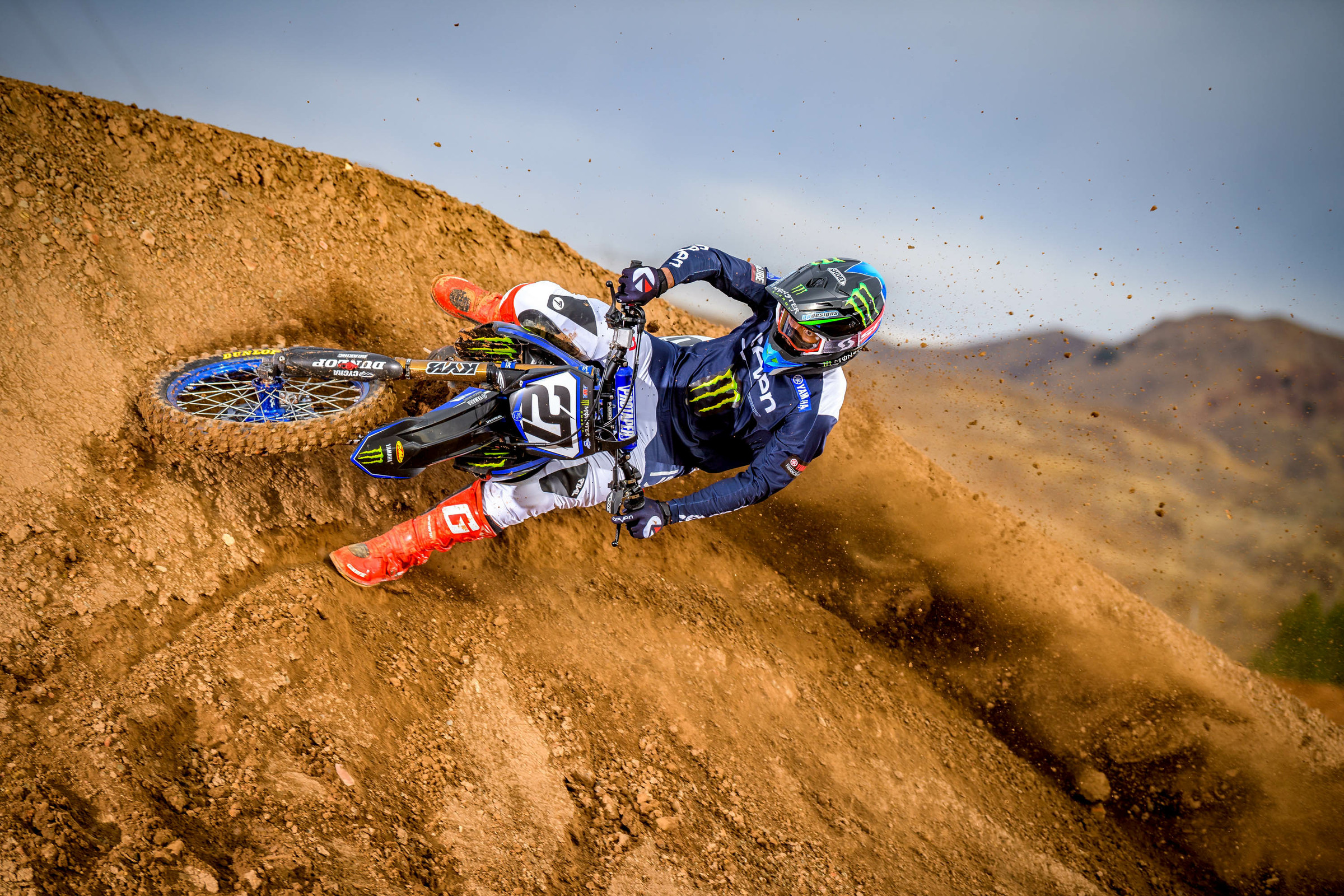 The lockdown, COVID-19 and all other madness that has mercilessly and indiscriminately cloaked all of us into submission and ordered us to hold station the past 11 months is now a memory (of sorts) because the new 2021 Monster Energy AMA Supercross season is upon us. Yes, we all realize the fact that there is no Angel Stadium on the tour this year, and the 2021 Monster Energy Supercross season schedule is now like a pile of nuts and bolts laying on a concrete garage floor, but none of that really matters now as race season is finally here. Still 17 rounds, still so many riders with such great ambitions of a dream season. To illustrate how very stoked we are about all that, on Taco Tuesday we rang up our buddy Malcolm Stewart to get his take on what’s about to go down this Saturday night inside NRG Stadium over in Houston, Texas. Now a member of the high flying Monster Energy/Star Yamaha Racing 450cc outfit, Stewart, the 2016 AMA 250SX East Region Champion enters 2021 as a full-on challenger for race wins—and perhaps even a title. Interestingly, 16 years ago, and a handful of days before the 2005 Supercross Series opener at Angel Stadium kicked off the new season, this writer sat with James Stewart, Malcolm’s full-on legendary older brother, to do the cover story for James’ 2005 250cc premier class debut. At that time, Malcolm was just 13 years old. Astonishing how much has truly come and gone since the Stewart brothers of Haines City, Florida, traded places here, with Malcolm now the one heading into a season opener hoping to grab race victories, on factory equipment, and looking to take the next step. So we chatted quickly to get an idea of what’s to come.

Racer X: Okay, Malcolm. Where are you at this Tuesday before Saturday’s Monster Energy Supercross season opener at Houston?
Malcolm Stewart: I’m in actually in California right now. I’ve been out here for a little over two and a half months now.

Not only getting your head wrapped around the new Monster Energy/Star Yamaha Racing YZ450F, but also getting the entire Star Racing staff, huh?
Oh yeah. Oh yeah, man. We’ve been going really good lately and so far, everything has been going great.

How’s your Star Yamaha 450 teammates, namely Aaron Plessinger and Dylan Ferrandis? You guys have radically different influences, styles and techniques…
Yeah, I guess me and AP have a similar personality, but I’m not too familiar with Dylan. I mean I’ve seen him in the past because he came from Europe. The only time I would know Dylan was when we would go race Paris, France and stuff like that. I would see him over there here and there, but he’s such a nice guy whenever we talk. Of course his English is always a little broken, but anytime we have conversations about anything, it has always been really good. And Aaron Plessinger… He’s a funny one, man. I call him a country bumpkin. That’s the right call with him.

He'd be stoked with that nickname, you know?
Oh yeah! Oh yeah! [Laughs] 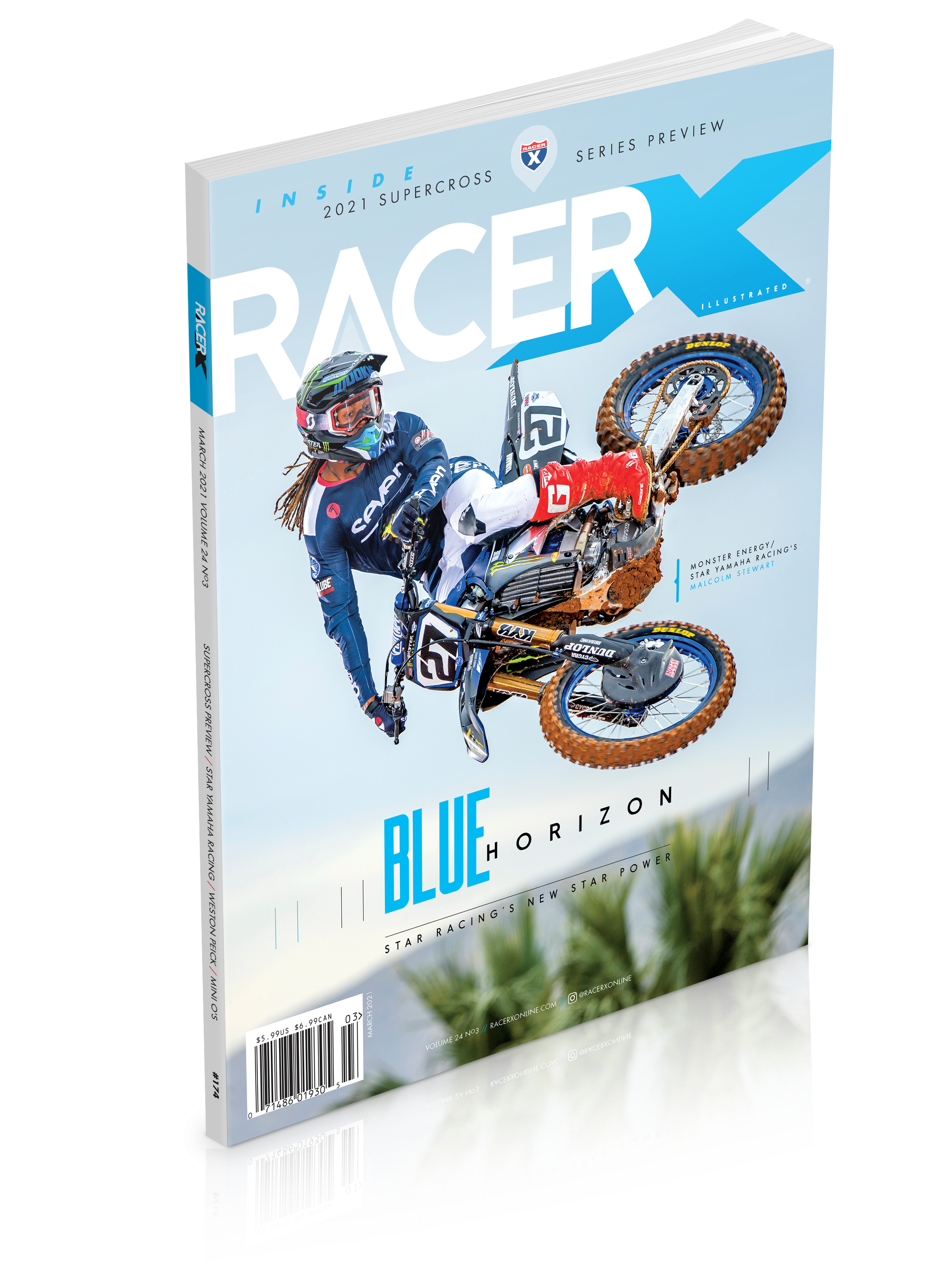 Inside the March issue: Trying to predict what will happen in Monster Energy Supercross 2021 is challenging at best, but we take a crack! Bobby Regan has amassed one of the biggest pro teams ever under the Monster Energy/Star Yamaha Racing tent. The 49th Annual THOR Mini O’s were a stunning, massive success. And Weston Peick talks about the road back from a career-ending injury. These features and much more in the March issue of Racer X.

What’s your frame of mind right now? I know that’s a goofy question, but when you take a good hard look at everything that’s played out and gone down during this offseason, we’re about to kickstart a season unlike any of the other 40-plus seasons that have come before it. I mean, how are you? How are you doing with everything here and now?
I feel really good. Of course with this whole COVID[-19] pandemic, it’s tough out here and a lot of friends and family aren’t around… You’re trying you’re the stay away from it, but it’s airborne. You can’t see it and you don’t know it. Every time that I pull up to a gas station and a pump, I get nervous and stuff like that because it can be something that is there for a couple of days or for a couple of weeks or a couple of months, you never know. It’s tough. It’s definitely one of those deals where I feel like that if things are different, that’s how they’re meant to be and I haven’t changed anything. I’m not sitting here and shying away from it. For me, it’s more like, “I’m going out here and I’m going to focus on doing my job and whatever happens after that, happens,” you know?

Absolutely.
I can only control what’s in front of me.

You come to Star Yamaha from MotoConcepts Honda where you raced the Honda CRF450R. You were totally in-step with that bike. How do you like your new 2021 Yamaha YZ450F bike?
I feel good. I feel really good. One thing that I always want to tell all the people this: it’s not just the motorcycle. It’s the team that makes the difference. It’s when you’ve got a team around you and supporting you and they all want the same goals, when you excel. That’s when you see the stars shine. I feel that we’re all great, but there are always those little bitty pieces of information that you have or don’t have. I feel like we have everything we need now. I feel like this year that I’ve done everything correctly and now it’s just about putting in the results and seeing where we are at. Another thing I like about the team, too, is that even know we’re racing events back-to-back in 2021, they already have great ideas of what we can do to test and things like that, where previous teams that I’ve been on may have done things differently. It’s definitely, like, these guys pick up on things a lot faster, but also too, this is a factory team and they’ve been there and they’ve done that and they know the odds and ends, so they know exactly what they are doing and for me to be a part of it, is awesome.

You placed a rock-solid seventh overall in the 2020 Monster Energy Supercross season and also motored off with the accolade of being the top non-factory racer in 2020. No mean feat, eh?
I mean, honestly, if we didn’t have those two tough scores—Salt Lake 1 and Salt Lake 4—we would have been in the top five at the end. But you know what? That’s part of racing! You bever know what’s going to happen and that’s why I love racing, because at the end of the day, that’s what we eat, sleep, and dream of. It was a good year, I will say! Everything was just flowing the way it was. Our goal was just, “Hey, man! Stay top seven! Stay top seven!” We started off with a little bit of eighths and ninths and tenths, and then the next thing you know, boom, we’re sitting top seven and then the next thing you know, we’re in the top five and getting closer to battling for the podiums with a couple of fourths and stuff. So I would say that for me, it was a good starting point because since 2017 and my rookie year, I went into kind of a downward spiral and then in 2019, I kind of got everything turned around and then, boom, I got hurt in the second race, so it was over before we even really saw the results. [Last] year, 2020, was really the first legitimate year that I had kind of everything in line. I had a good off-season, I stayed healthy and was in a good program working with my trainer Gareth Swanepoel. I also had a solid nutrition plan. Everything was in the right order, where with the previous years, it had been like, coming into and doing okay in the second round or in the third round. Then I ended up filling-in for some certain people and things like that at the races and it was all kind of a scramble. I would say that these last two years that I’ve had, 2019 and 2020 coming into 2021, I’ve had great off-seasons and everything was flowing the way it should have been. For me, I’m more than excited to see how this thing all turns out. It’s going to be a little weird. It’s definitely going to be weird that we are all doing these races back-to-back. We went to Salt Lake City and tried to end the season, but this is where we are starting off like this, so this is definitely all going to be a little weird, but there are still 17 rounds and they’re still treating it like a legitimate supercross season and that’s how it’s going to be. I’m really excited, like I said. I can only take it race-by-race and learn from it and go from there.

A lot of people have been telling me incessantly over the past few months, a lot of smart people, they insist that you’re going to kill it this season. Heavy praise. Thoughts?
Oh yeah! I definitely feel like I can, you know? Once you’ve won a race, you know exactly what that feels like. Whether it’s 250 or 450, it don’t matter. You know exactly what it feels like to win. You know what it feels like to lead laps. You know exactly what that pressure feels like. I’m ready for it. I can’t wait to have that pressure again! I’m ready for all that. And being in the premier class… Man, you go to the line and look to your left and then you look to your right and the top 18 guys have done something! And the majority of us have won the 250 title, for sure. Top five finishes, podiums, race wins—these guys have done it all. It’s tough! You look down that like and you say to yourself, “Man, this is crazy…” That’s what we live for! And the cool thing about it is that a lot of us kind of grew up with each other racing. Now, it’s like that new age of racing. It’s just us! We know how to deal with it. We’ve all been there and we want it! Everyone has their flashes and stuff like that, it’s just a matter of being in the game, man! It’s just like a college player going to the NFL! They’re good! They’re all good, but it’s a whole different ballgame now! And we love it.