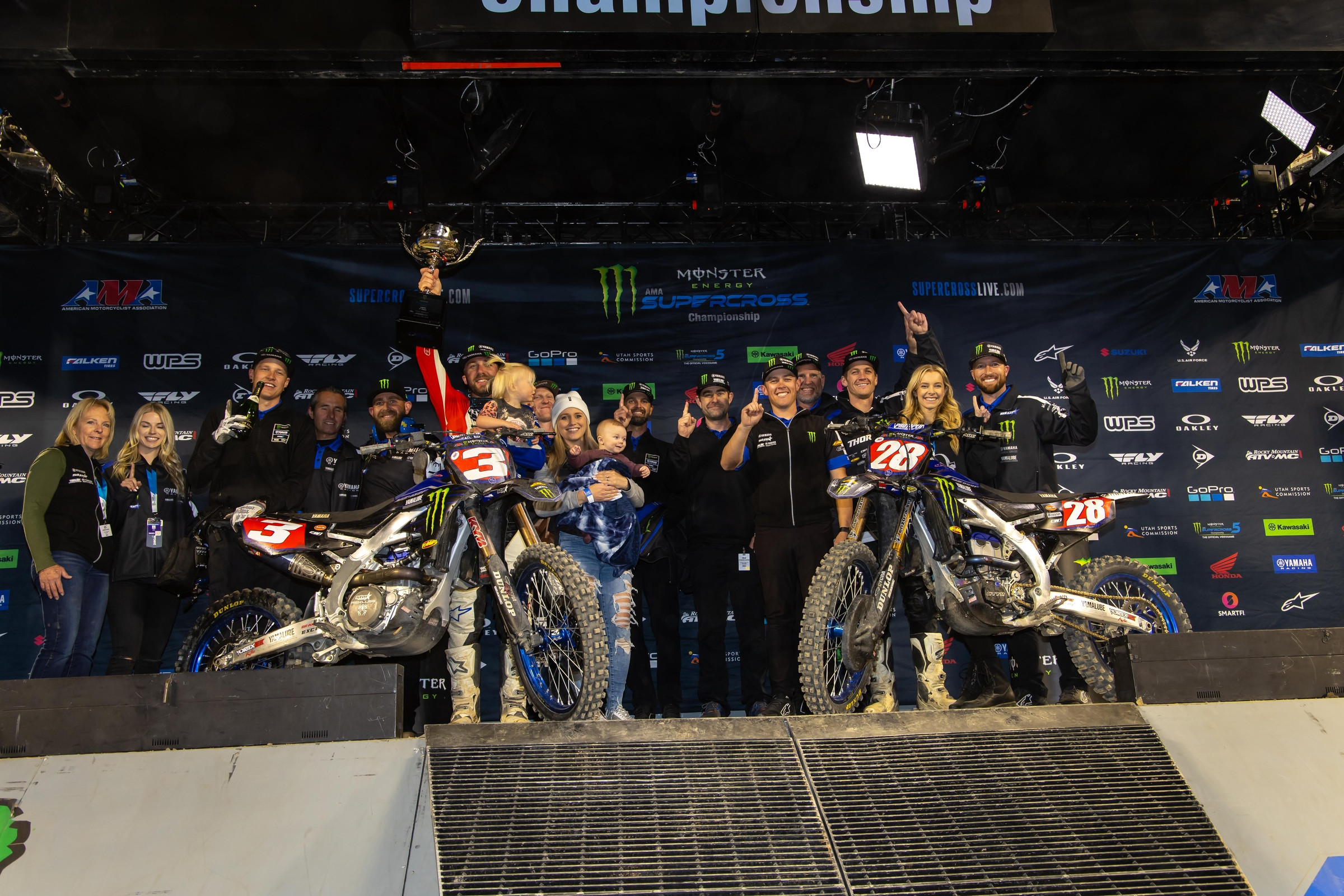 We’ve actually written this story several times. It probably started in the first four motos of the 2014 Lucas Oil AMA Pro Motocross Championship, in the 250 class, when Jeremy Martin and Cooper Webb were going 1-2, respectively, each time. This came out of nowhere, as Webb and Martin didn’t win any supercross races that season, but once the flood gates opened outdoors no one could close them back up. Martin and Webb kicked off a massive run of race wins and titles for Star Racing Yamaha YZ250Fs in the 250 class, indoors and out, with more than a half-dozen riders. No one was ever quite sure where to lay the credit. The YZ250Fs intake-in-the-front “reversed” cylinder arrangement made it easy to spot the difference maker in a class where horsepower reigns. Was Star just riding the coattails of being the only factory team in the U.S. with the YZ250F at its disposal? Was it the riders or the bike or the team?

When the squad got the call to go to the 450 class, it provided the real test. If Star could start winning on a YZ450F, also, we’d know. Somehow, some way, Eli Tomac became an early adopter, signing with the team before it had even won a 450 race (don't let the off-season announcement fool you. Tomac had signed with Yamaha before last year's Pro Motocross season even began). Then the winning started. Dylan Ferrandis’ 450 Pro Motocross Championship, in year one, provided some serious validation.

On Saturday night in Anaheim, Tomac won in his first race for the team, in just his fourth attempt. He extended his points lead in the 450SX class. Meanwhile, his 250 teammate Christian Craig won the other class, giving the team a sweep of the night and a better grip on the points lead in both classes. Just another notch. Another mark. Another sign of Monster Energy/Star Yamaha Racing just taking over the whole everything.

“It’s just cool that moving to this new team, it was a little bit of a gamble and it totally paid off,” said Tomac. “There’s no questions now that we can get it done. So, we’ve just been improving every race. I’ve been getting better every main event. Working on weaknesses, and it’s paying off on the weekends. Just really, really good. Really great group of people behind me. We haven’t stopped getting better. Really cool for us to get this first win.”

A year ago, I wrote a story in Racer X Magazine on Yamaha switching from an in-house factory effort to using Star, and the corporate side was adamant it wasn’t done to save money or change budgets. This was a performance decision, and Star’s performances in the 250 class earned them a shot to try to replicate it in the 450 class. Credit goes to team owner Bobby Regan, who has a relentless love of winning, and has hired the right people in the right places to grow the squad. The way it's currently broken down, the 450 program is run by Brad Hoffman and Jeremy Coker, who moved over from the 250 side. Regan is more involved with the 250 and amateur efforts, along with new 250 team manager Jensen Hendler. Before that it was Wil Hahn and Seth Rarick over on the 250 side.

Star, then, has grown, but it's in many ways the same. Still, it would be extremely hard to replicate the 250 success in the 450 class, but with Ferrandis’ title and Tomac’s quick shot to the top of the supercross charts, the revolution has been swift. The team has been winning in both classes now, and it’s prepared to do much more. The benefits of housing its race team in Florida (race shop and all) at Ricky Carmichael’s GOAT Farm will only get stronger. And the success of the 250 and 450 operations only makes it easier to attract young talent who sees this team as the easiest way to go all the way to the top. Not only does Star provide a fast 250 to win amateur races and 250 pro titles, but a potential easy transition into the 450s. In some sports, the bad teams get the good draft picks. In motorsports, the teams with the fastest machines attract the best talent. It’s a vicious cycle…for anyone racing against them.

This season is just starting and Tomac’s return to the top of supercross might not end with a title. It will be many months before we know that. But at Anaheim 2 the team held the top spot, and the points lead in both classes. The relentless pursuit of everything continues. 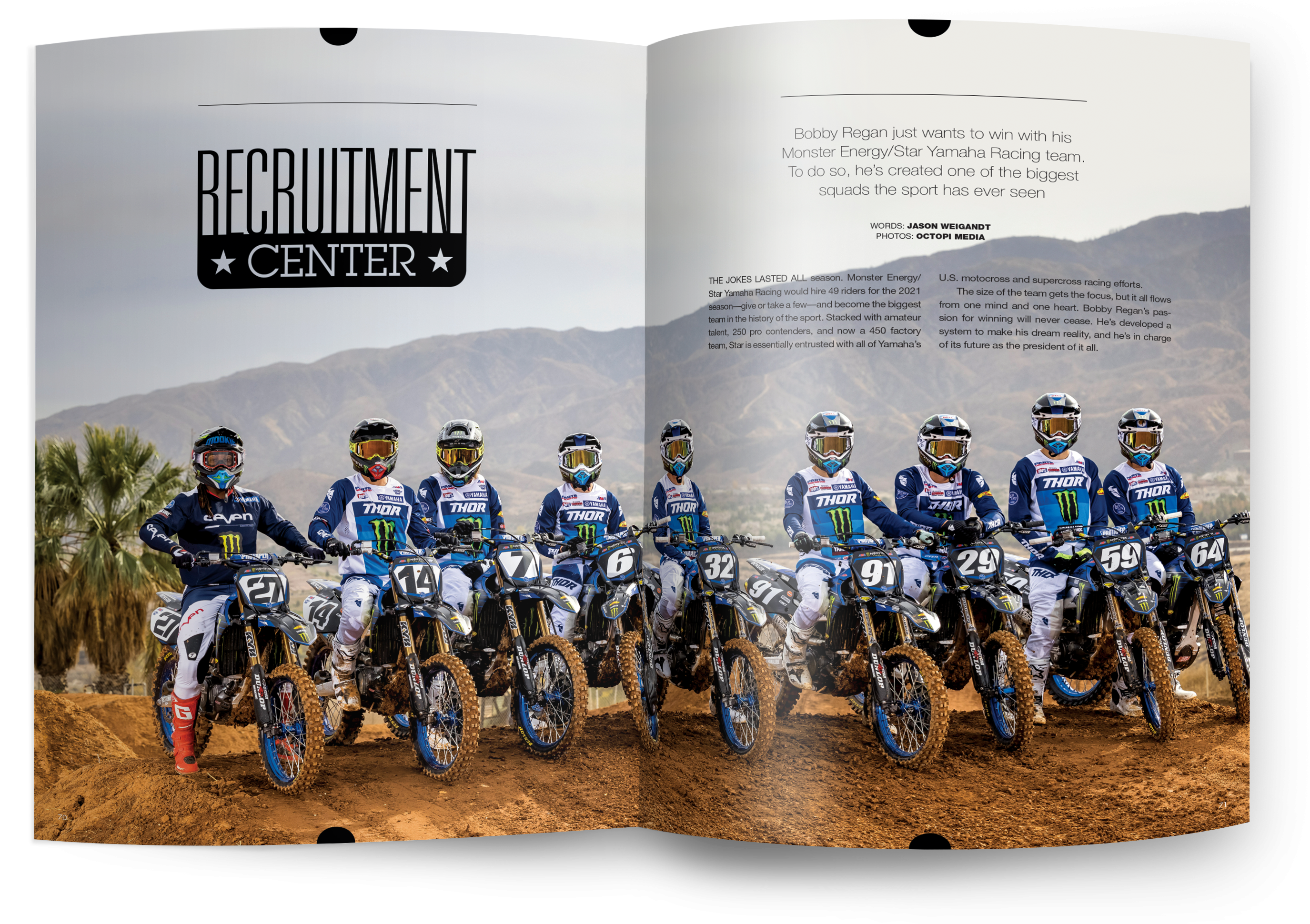 Bobby Regan just wants to win with his Monster Energy/Star Yamaha Racing team. To do so, he’s created one of the biggest squads the sport has ever seen. (Read or listen)