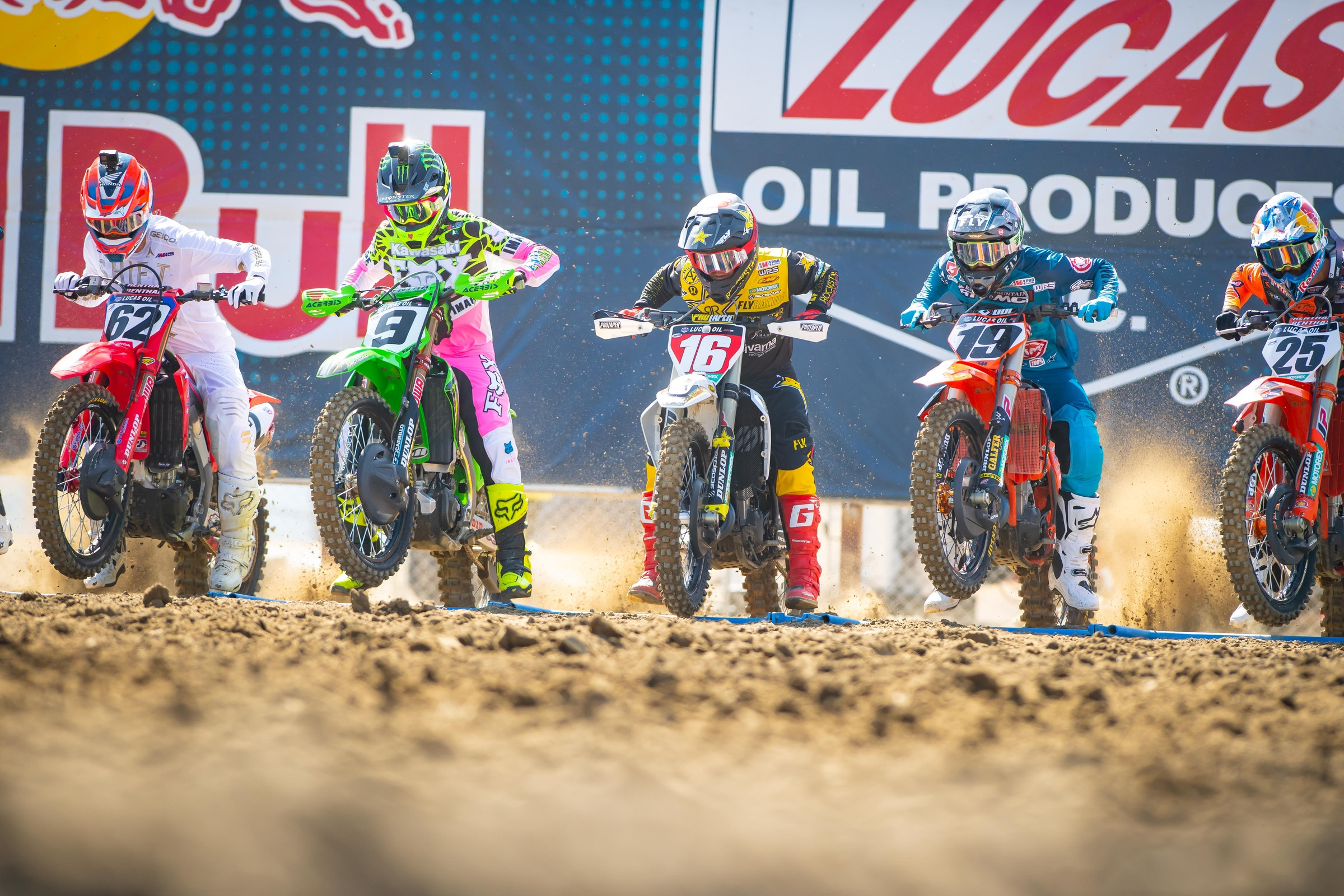 The 2021 Lucas Oil AMA Pro Motocross Championship schedule has been announced, and it welcomes quite a few familiar tracks back to the calendar. We rounded up Davey Coombs (who is the founder of Racer X but also the President of MX Sports Pro Racing, which operates Lucas Oil Pro Motocross) for an explainer on the what, where, and why of the ’21 schedule.

Then we asked our Jason Weigandt and Jason Thomas for their take on the changes.

1. Davey, explain some of the changes to the schedule.

Davey Coombs: Welcome to the 2021 Lucas Oil AMA Pro Motocross Championship schedule. And welcome back to optimism. Ever since last March our world has been trying to navigate the pandemic that is ongoing, but also hopefully on its last laps. We’ve all had to scramble for ways to get back to our regular ways of life, changing schedules for, literally, everything, as COVID-19 restrictions vary from state to state, and they are constantly in flux. It's still having its effect on this sport. Monster Energy AMA Supercross will start with a tripleheader in Houston this weekend, and go nowhere near its traditional bases on the west coast. Fortunately, this summer looks a little more promising, as most experts feel that with the vaccine now being produced and distributed, we will hopefully be getting back to some normalcy soon. It's with that in mind that MX Sports Pro Racing and its event promoters came up with a schedule that more resembles the 2019 schedule that was completed, rather than the 2020 one that was literally torn to pieces dozens of times. Back on the schedule are some of the true pillars of the series that could not go in 2020 due to either local restrictions in place or ones that were planned to soon be implemented: Hangtown, High Point, Washougal, Unadilla, Southwick, Budds Creek. And, for the most part, they are on their traditional dates. (Well, except for Hangtown, which is in California and has a better chance of getting the go-ahead at the end of summer rather than the beginning.) It's an optimistic schedule, given where we are right now, very early in the New Year. But everyone wants to return to these tracks as soon as possible, and 2021 seems very possible.

Unfortunately, WW Ranch Motocross Park asked to be left off the schedule for 2021 as they take the year off. The three times that the Jacksonville, Florida, facility has hosted professional motocross events—first an MXGP round and then, for the past two years, a round of Lucas Oil Pro Motocross—they have had the unfortunate run of heavy rain (the September '17 MXGP), stifling heat (June '19) and then a global pandemic ('20). Hopefully we can work out a date with them in the near future for a return, as Junior Scarborough and his family and crew have been wonderful to work with and the riders really enjoy the track.

Also missing from the schedule is Loretta Lynn's Ranch, which stepped in to host the first two rounds of the '20 series when it was nearly impossible to cobble together a full schedule. It will remain the home of the AMA Amateur National Motocross Championships and also be an excellent option to fill-in if another round cannot go, for whatever reason.

We are starting the schedule one week later than normal because Hangtown, the traditional opener, asked to move to the end of the schedule. While Fox Raceway at Pala may be in the same state as Hangtown, it's in a much different situation when it comes to restrictions, because the track is on the tribal lands. That also makes it a very good bet for a second go round at the end of the schedule. It's very close to where the riders and race teams are based, which is where they not only would prefer to start the series, but also end it. And part of the reason it ends on September 11 is at the request of Roger De Coster, who is planning on returning with Team USA to the Monster Energy FIM Motocross of Nations in Italy on September 25-26 and wants racing to continue as close as possible to the event in the hopes of keeping our guys sharp and focused on outdoor motocross, as well as giving AMA-based riders from countries like France, Germany, Great Britain, Australia, and more a chance to participate in the MXON.

Scheduling out a summer of events is never easy, especially in an ongoing pandemic, but I believe this is the best schedule Lucas Oil Pro Motocross could come up that has a real shot of happening as-is, without any last-minute moves or dropouts for whatever reason. It's also why its release came much later than normal. But nothing is normal right now, but here's to future days and years.

2. JT and Weege, what do you think of the timing of the races? The season starts and ends later?

jason thomas: I think it's a nice compromise on a few levels. First, it gives riders and teams a break after Monster Energy AMA Supercross ends. That extra week or two means a world of difference for the road weary industry. It's a bit more of a throwback schedule now, starting in late May and ending in September. The other upside is that the gap between Hangtown (finale) and the Motocross of Nations has been reduced. An August end to the Lucas Oil Pro Motocross Championship coupled by a (sometimes) October MXoN event is simply too far a bridge to gap for many riders and teams. This schedule would be much more manageable on that front and since MXoN is my favorite event of the year, I couldn't be happier.

jason Weigandt: Anyone that works in this industry knows leaving home every weekend is far from normal. So sometime around September my wife is going to be all, “Why are there still races left? Aren’t you normally done by end of August?” Yup, normally, yes, but here we get a few extra weekends off sprinkled in through the season which I will surely get no credit for on the home front. What’s that you say? Cry me a river? True, you don’t need to care about my feelings, but I will make this a larger story. No matter how you slice the calendar, you’re always putting the same amount of races into 52 weeks. You can’t make everyone happy. A decade ago, teams were saying they wanted fewer breaks to just get the season over with. A weekend off during the season means a rider can’t really relax, because the training must continue, while a weekend off after the season means you can just chill. I’m all for having more breaks built but in, but if I hear anyone complaining “It’s September I wish the season was already over! Let’s ditch the off weekends and just get to round 12!” I’m going to have to call them out. This is six of one and half dozen of the other. By the way, I’m all for anything to make the MXoN more palatable for riders and teams. That I can get on board with, but I don’t want to hear any complaining when we’re racing in September!

3. Old favorites (Hangtown, Southwick, Unadilla, Budds etc) are back. Talk about those venues.

jt: Those venues are staples of American motocross. It was great effort to put a series together for 2020, but it wasn't the same for me without those tracks involved. I raced this series for 16 years and that means I did hundreds, if not thousands, of laps all of these hallowed locations. They make up the face of motocross when considering the centuries of motocross they comprise in total. Last year required compromise on nearly every level of humanity. Motocross was not spared. Now that 2021 has hope for a return to normalcy, I will be happy to travel back to these locales that I know so well. It will be better than ever when we get back to these fun old tracks!

Weigandt: During the super-lockdown 2020 days of March and April, I said I would be the happiest person ever if we could just get back to a race track again. That was kinda true. We all eventually got back to the races and got our jobs back. It was great. But we also all know it used to be better before the pandemic. We missed some iconic tracks, we missed fans (zero at supercross, limited in motocross), we missed a lot. I’ve moved the goal posts. To me, the nationals are about more than just a track and results but the overall atmosphere of the town, the facility and the event. If you’re a fan who always goes to one or two races per year, you know the feeling I’m talking about. There’s a whole experience to the road trip and the weekend with your friends and family. We didn’t get that full feeling in ’20. I didn’t get to drive route 8 in New Berlin, New York, early on a Saturday morning. Didn’t get to see fans hanging over the fence at Southwick. Didn’t hang with Moser’s gang at Washougal. Didn’t get a crazy podium scene at RedBud. Oh, and Budds Creek had become “buddies creek” for me, because Grant Langston and myself would go trail riding nearby on Friday with some local Maryland guys. On that note, a sad RIP to our friend Mark Adams, who hosted GL and I at his house the last few years. Mark is now gone, but we will not forget him. You meet so many local fans and friends at these tracks and each place has its own vibe and own memories. We missed so much of that in 2020. Hopefully we will see some of the old flavor come back, and the old tracks are a good start.