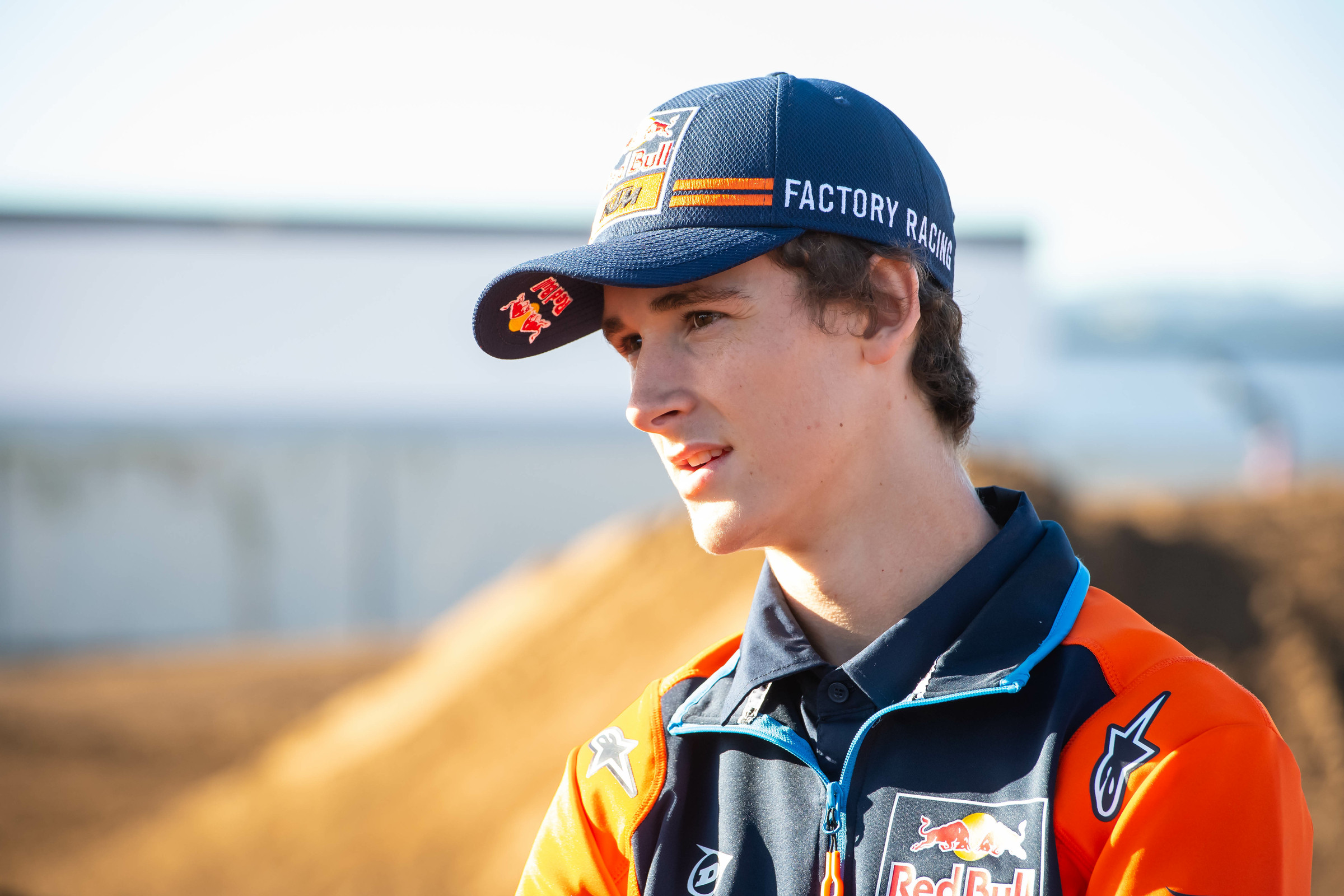 1. What about Broc Tickle going to MCR?

Steve Matthes: Wow, didn't see this one coming. Much like Malcolm Stewart leaving MCR, Justin Hill chose to exit stage right after a very good season, his first on the team. Hill's got all the talent in the world but I do wonder if he wants to actually put the work in to take advantage of said talent. Anyways, after Hill wouldn't sign his contract with the team, they went out and grabbed essentially, the anti-Justin Hill. Tickle doesn't have the talent that Justin does but he's very good, he works harder than Hill, he'll be more reliable than Hill and although the highs won't be as high as with Hill, he also won't cause anyone there to pull their hair out either. Tick came back to SX last year after his suspension and definitely didn't look as good as before but he was also on a strange JGR Suzuki that he couldn't quite figure out. He got a bit better on the bike and he'll be better with a whole off-season to get used to the Honda. I think he'll also help the team a ton with testing and he's done plenty of that for his different teams over the years.

Jason Thomas: I had Broc near the top of the list of "I don't have a job but I should" riders. The 450 class is getting more crowded each and every year with more 250 riders making the jump up. I find it a bit interesting that Broc is on a team that doesn't race the Lucas Oil AMA Pro Motocross Championship but I have a feeling Broc could find a fill-in factory ride for the summer if needed. On paper, though, this all makes sense. Broc is a no-nonsense, hard work guy and I think that resonates with his new team. I have absolutely no idea what Justin Hill's master plan is but for Tickle, this contract balk was a godsend.

Jason Weigandt: I was surprised by this one, even beyond the, “Wait, what happened to Hill?” question. (Which remains unanswered.) Tickle is a good, solid choice, no doubt about that, but I feel like this team makes its impact by straightening out high-talent guys who got sideways with other teams. Hill was an example of that. He was on the verge of some real breakthrough results until the COVID-19 break hit. We also know what this team has done to push Malcolm Stewart’s results forward, and Vince Friese also gets better results and shows more speed than anyone thought he would five years ago. Tickle is a good rider, but he’s already delivered before for a variety of teams. I don’t see him suddenly going next-level on this team compared to his previous days with RCH Suzuki or the brief time with Red Bull KTM. He will certainly give the team his best effort and record consistent results. This is a great spot for Broc—who didn’t have anything else going—but I was surprised not to see the team take a big risk on someone else.

2. What about Max Vohland going pro with factory Red Bull KTM and starting in supercross?

Matthes: I don't follow the amateur scene much but I know there was grumbling about Tallon Vohland sort of holding his son Max back in amateurs and for lack of a better term, "cherry picking" where and who he was going to race. Tallon in turn told a lot of people that he was slow-playing Max's career and didn't want to rush him into the pros and not be 100 percent ready. And Tallon had a point there, right? Plenty of kids have jumped into the pro classes and were overwhelmed, so taking some extra time to develop Max seems like a good move. Soooooo that's what makes this move puzzling for many in the pits, right? Just, BOOM into the Red Bull KTM factory team and right into supercross? Okay then! I heard that KTM added an extra year to the Vohland deal just to assure him that he has time to figure this out in case his results aren't as expected right out of the gate, which is a good move. How is Vohland going to get his SX license though? Are "we" doing anything about that now or just because he's a factory rider, we're going to overlook that? Anyways, I'm not sure how he's going to do but hopefully everyone realizes that this is a huge jump from where he was and it's going to take time, I think.

JT: It's a curious move but this is a sport of curious moves. We don't often see a rider go from amateur to the factory OEM truck very often. Twenty five to thirty years ago or more, sure, it was commonplace. With the advent of factory satellite teams like Monster Energy/Pro Circuit Kawasaki, GEICO Honda, Monster Energy/Star Racing Yamaha, Troy Lee Designs/Red Bull KTM (now GasGas), etc., a factory-supported steppingstone was created from amateur to pro. Some bypass this step but it's usually in a next-gen type talent like James Stewart. Maybe that's what Max Vohland ultimately becomes but on the surface, I didn't expect this move. I would have expected him to transition to the Troy Lee Designs/Red Bull/GasGas program but maybe KTM brass simply wants to keep Max in orange and this was the only option. I think the major key here will be patience for all involved. Racing out of that full factory effort raises expectations, even if unintended. There will be an extra bit of pressure added that needs to be actively brushed off from the top down. Max needs to grow into this next step without the weight of the world on his shoulders. Adding extra expectations could mean the difference between flourishing from the support he's given or crumbling under the pressure of such a prestigious landing spot.

Weigandt: I was really interested in Tallon Vohland’s plan to help develop Max as a young rider, which included racing EMX125 races in Europe. Unfortunately, we’ll never see the results of that, because COVID-19 ended his 2020 Euro run after just one race. Then KTM moved the TLD 250 team over to GasGas, creating a need for a new 250 rider on a KTM, and Max’s name popped up. I talked to Max and Tallon and they just said the chance to get on the factory team right here and right now was just too good an opportunity to pass up, so suddenly the slow road looks like the fast track. To me, the factory slot isn’t a huge deal, because I don’t consider the “satellite” 250 teams to really be a step down from a factory team. Is there a huge difference between Monster Energy/Pro Circuit Kawasaki and Monster Energy Kawasaki? I don’t think so. Max starting in supercross is the weird part. I’ve seen him ride supercross-type tracks before and he has skills (small sample size, but people are still buzzing about the time Max did practice runs on the Red Bull Straight Rhythm track on his Supermini a few years ago). Still, it’s a big leap from amateur 125 kid to Monster Energy Supercross on a 250F. I’ll have to put my faith in Max’s maturity—with the help of his dad—in not making a mess of a big jump like this.

3. What about Joey Savatgy at Rocky Mountain ATV/MC WPS KTM?

Matthes: Speaking of MCR, I had heard the team made Savatgy an offer at one point and gave him a deadline to sign a contract. That deadline came and went so the team went after McElrath. I guess now we know why that happened, right? Joe-Dawg must've had the Rocky Mountain ATV/MC-KTM-WPS guys telling him that Blake Baggett was gonna leave the team and he can have that spot. At least that's what I assume. I think although Kawasaki was ultimately proven right in that Adam Cianciarulo was worthy of a 450 spot, Savatgy really didn't deserve to lose his ride on the factory team. Then 2020 was just a complete write-off for him. He'll have a good bike over there, he'll be hungry to prove something and hopefully his injuries aren't still lingering, which he told Weege they weren't.

jt: I am not really sure on the why for this spot being open but the Blake Baggett departure is a story to be told by someone else. As for Joey, he has huge upside. His season on Monster Energy Kawasaki was eye opening. He was, in my opinion, the best rookie that season and yet still lost his spot. That move by Kawasaki brass proved to be correct as Adam Cianciarulo was a revelation in 2020 but the fact remains that Joey outperformed the decision to be let go. We all saw that 2020 wasn't a banner year for Joey but the promise and potential remains. Whether Joey finds success in 2021 will be determined by Joey alone. The equipment is race-winning capable and I like the combination of Joey's starting prowess with the KTM proficiency in that arena. This really might come down to preparation, consistency, and remaining injury free. The talent is there, the equipment is there, and the motivation should be there.

Weigandt: Yeah, the Baggett situation is super weird, he has another year on his contract but now he’s off the team. Maybe someday Blake will explain his side but, knowing Blake, I don’t expect it. Savatgy on the team is an incredibly fortunate situation for both the team and rider. Blake did amazing things for this team, but Savatgy puts them right back in the ring with a legit contender. Joey is underrated fast, kind of like Baggett. He hasn’t won 450 races like Blake, but we only have a rookie season with real data on him, and he showed potential. Plus, the dude has to be super fired up to prove himself and make the most of this opportunity. Good move for Joey, good pickup by the team. Not good for Blake Baggett, I would think.