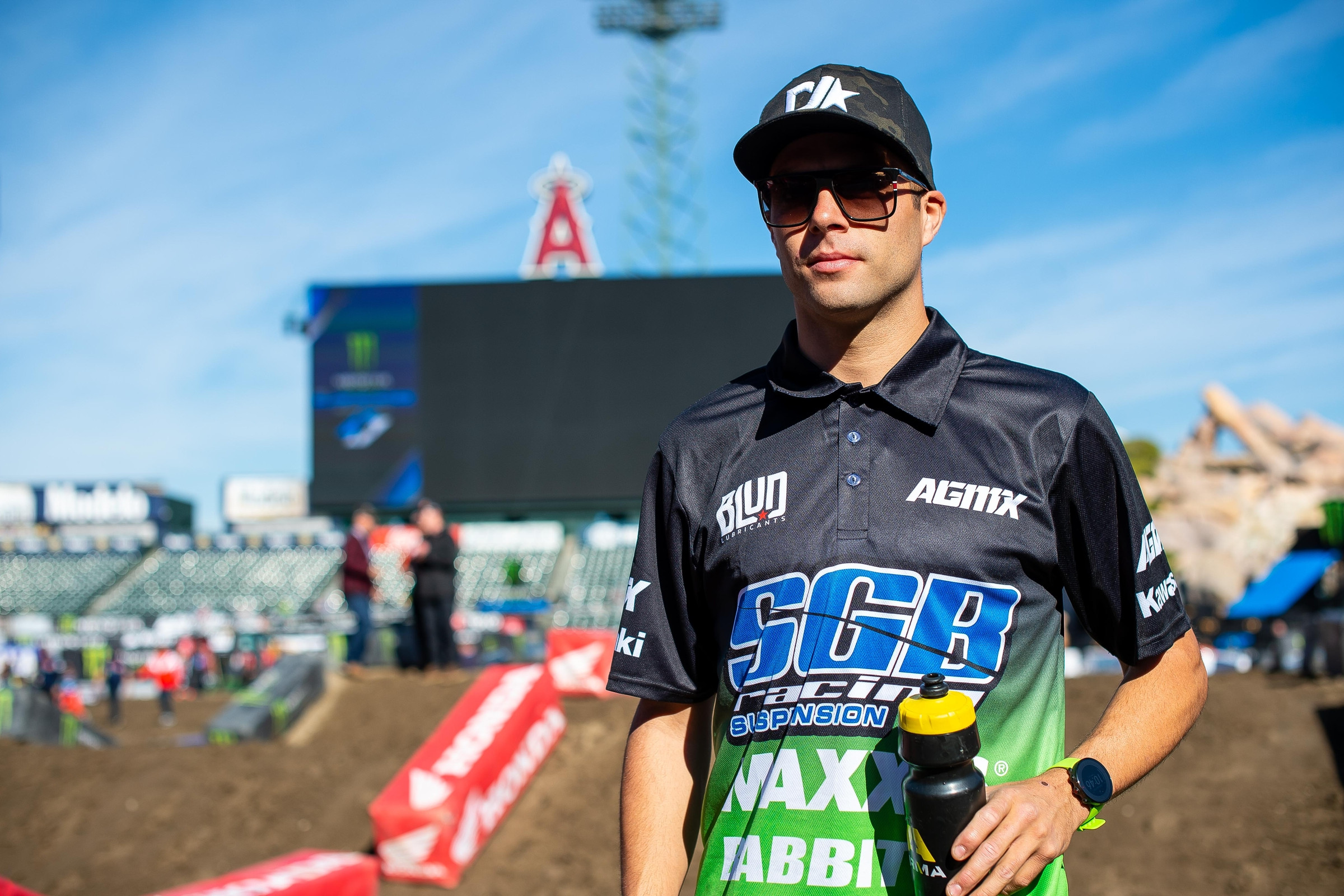 Alex Ray was once a totally obscure racer, not even in the hunt to make main events. In fact, he says his goal was just to try to make the night show at supercross races, and even that was a challenge! Over the last three seasons, A-Ray has stepped up his training big time, he’s gotten faster and fitter, and now he works his way into the mains on a regular basis.

The results are just part of the story, though. Alex is one of the most hilarious personalities in the pits. Because he’s so entertaining, we’re running a two-part interview with him. This week we’ll focus on his 2021 plans with the SGB Racing/Maxxis/Babbitt’s Kawasaki team. Next week we’ll talk about his humble roots in the sport and his long climb into main event status.

Racer X: Okay A-Ray, what do you do this time of year? Are you in potato chips and chillin’ mode right now? Or are you grinding?
Alex Ray: No, I’m grinding. Wake up early, do my warmups, head to the track, do my motos, come home, do my bicycle, do the gym work. So right now, we’re in full boot camp status. I did take some time off there, so I’m just trying to get all this weight off. After the season I went on a full food bender!

Oh, so you did do that! Just not here in November.
Yeah! We had that. Now we’re back to the grind.

So, the SGB Kawasaki team is back and you’re back with them? A rare privateer who knows what he’s doing two months in advance?
Yeah! Staying with SGB Racing/Maxxis/Babbitt’s Kawasaki, and Babbitt’s has stepped up their program with us, which is pretty awesome. Jason, the team owner, he’s excited to do another year with us. It’s gonna be good.

The team was new in 2020 and did pretty good. Does it seem like it’s easier to get support now?
Yeah. We me having a few good races and Justin Rodbell really coming on outdoors…. really, all three of us, Jeremy Smith and Rodbell were good outdoors. Me, we all know the struggles I had. It was just 2020, I guess! Jeremy Smith had some good rides and Rodbell just crushed it. We got some good exposure and put in some good results.

You were on the HEP Suzuki team in 2019. SGB was new for 2020. Were you worried about how this would go in its first year? You can tell us the truth now.
Oh, I was skeptical, that’s the way you have to be with all first-year teams. Even with HEP, it was a second-year team and we had growing pains. That’s just how it goes. Jason at SGB, he made it happen, and really, he went above and beyond what he said he would do for me. He did more than what the contract even said! Props to him for sticking with it and learning. He was like a sponge this year, learning a lot.

But the crazy thing is that Rodbell’s bike was fine! You had teammates that were okay!
Yeah! Now, Jeremy Smith’s pipe did break off at Pala. Same thing happened; the little tab broke behind the subframe. The subframe didn’t break, the nut behind it popped off. And Rodbell’s was loose. It didn’t break off, but it almost did.

Sounds like this is contagious now.
I really hope not!

Does anyone know why your muffler falls off all the time? Is it some way you’re gripping the bike, or revving it, something?
It’s just freak stuff that happened. First time it happened; I had a brand-new bike. I think it was Millville. I said I wanted a brand-new bike because I was having so many issues. RedBud weekend was crazy. So, the team goes out and buys me a brand-new bike. On the Kawi, the subframe where the pipe mounts on is pretty weak. With the FMF pipe, it doesn’t have a rubber mount, it’s solid, so there’s a lot of vibration. You can weld the tabs on the subframe, but we had a brand-new bike, and we didn’t do that. So that’s what went wrong at WW Ranch. Apparently, the next weekend we put an older, reinforced subframe on, but I guess the threads were pretty blown out, so it loosened, and it fell out again!

Can you spot the difference in the photos below?

Okay so a full year of testing, you have it dialed now?
Oh my bike is gonna be solid. My bike is gonna look like one of those cars from the movie Death Race.

[Laughs] Okay so you’re California guy all the way these days?
Yeah, these days. Before outdoors I was at my parent’s house in Tennessee, they have a track. But for me, the best thing about California is that you never miss a day with the weather. Even if it rains here you can ride, like a sand track or whatever. The weather is so unpredictable on the East Coast.

Oh yeah, I remember. You have deep roots at ClubMX in South Carolina.
Yeah, ClubMX! I remember there were times where we would go a full week and not be able to ride, because of rain all week.

So, what’s your goal as a racer these days? You used to be battling to get into main events, now you do that pretty regularly even when you get garbage starts in the LCQ. So now do you look to certain results in the main?
For me it’s top 20 in points. That’s the goal, that’s where I need to be. We missed it this year, I had a bad crash in Tampa and that set me back. I struggled with pain in my back for a few rounds after that. So that’s the main goal. Top 20 in points.

So, what’s your goal as a racer these days? You used to be battling to get into main events, now you do that pretty regularly even when you get garbage starts in the LCQ. So now do you look to certain results in the main?
For me it’s top 20 in points. That’s the goal, that’s where I need to be. We missed it this year, I had a bad crash in Tampa and that set me back. I struggled with pain in my back for a few rounds after that. So that’s the main goal. Top 20 in points.

You’ve come from nowhere. Did you ever expect to have top 20 in points in 450 supercross as a realistic goal?
Hell no! When I was a kid, I wasn’t bad on 65s and 80s, but when I got on big bikes…. [Laughs] it just didn’t click. I mean, you looked up my results from Loretta’s. They weren’t good!

Dude, I did look them up. You got 12th in the B class and then you just turned pro?!
Yeah, I really don’t know man. I was 16 and my dad dropped me off at a supercross academy in California. By myself with a credit card. That was a bad idea, by the way!

Okay, we’re going to get into your strange background next week. Anyway, the most fun atmosphere in the pits, the SGB team?
Yeah. There’s no competition for that. We keep it loose.

And you guys do all interact? You, Rodbell and Smith?
Oh yeah, we’re homies.

What happened to Rodbell’s HVAC job?
Well, HVAC means AC right? Does anyone even need that in the wintertime?

The H stands for heat, bro.
Oh sorry! [Laughs] I don’t know! His boss is cool and maybe he just got time off! I don’t know man!

You can listen to the full interview with A-Ray on the latest episode of the Racer X Exhaust Podcast below: