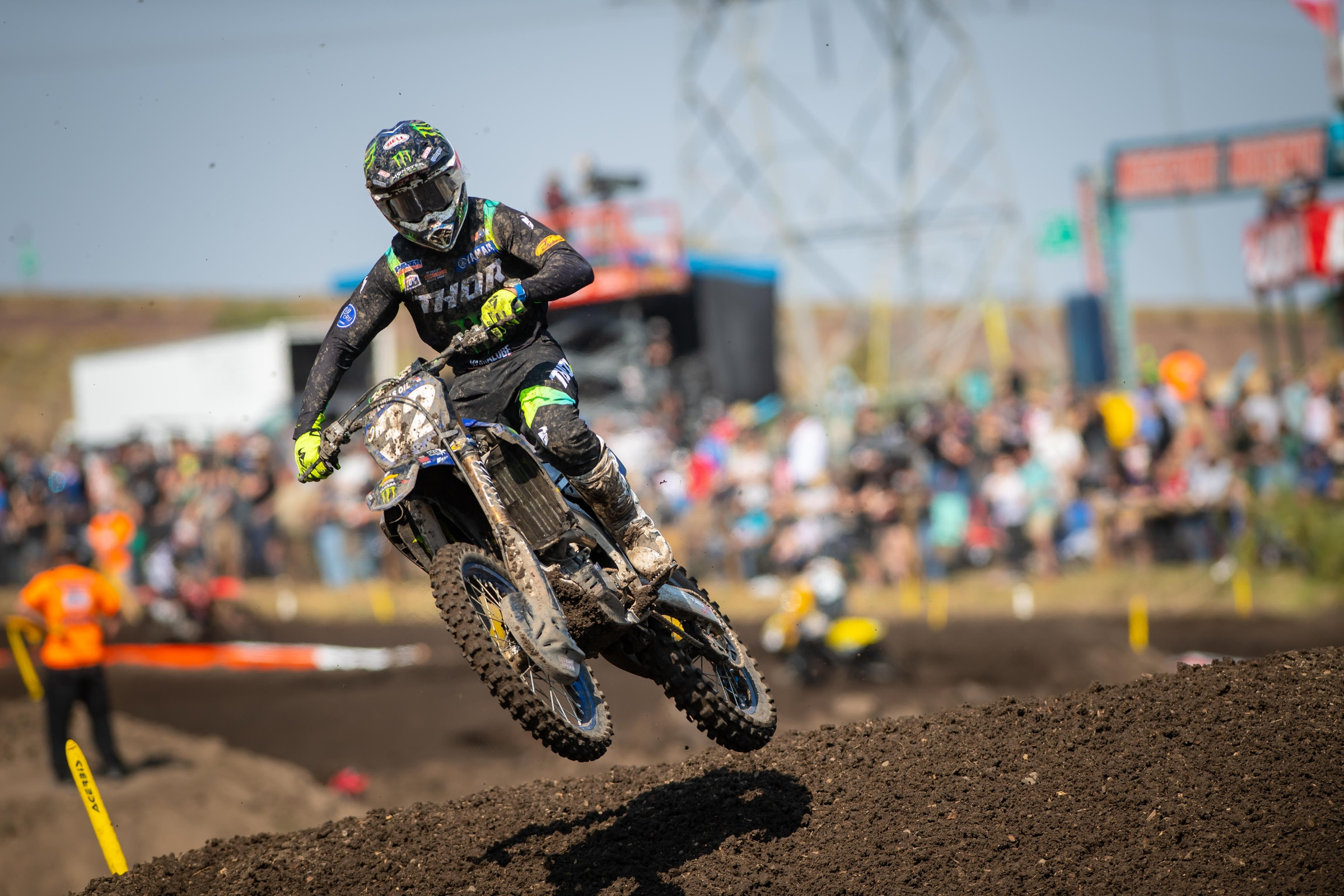 We’ve become accustomed to consistency from Monster Energy/Star Racing Yamaha’s Justin Cooper, who has been a top-three guy in most races and every series since he’s turned pro. Cooper has finished third in the last two Lucas Oil Pro Motocross 250 National Motocross campaigns and second in his last two Monster Energy AMA Supercross 250 seasons.

His 2020 Pro Motocross season hasn’t been on par, though. Cooper entered the motocross season coming off an injury and hasn’t been himself until lately, with a second overall last weekend at the WW Ranch National and now a victory at Thunder Valley via 2-1 finishes.

He talked about it with the media in the post-race press conference.

Racer X: Justin, congratulations today. I know this has been building for you. You were coming off an injury. It took a while to kind of get back into your groove and get back to that speed that we’re accustomed to seeing. Looks like it all came together today. Fastest qualifier, two solid starts, and you were able to get the job done. Talk about what it feels like to be back on top of the podium.
Justin Cooper: Yeah. I actually didn’t really execute my first moto start the best, so that was kind of a bummer. I really sprinted the first couple laps to get myself in a position to get towed away with the leaders, my teammates. Pumped on that. I just settled a little bit too much in the middle of the first moto. Nothing I’m mad about. It was still a good ride. I kind of took second in a way and tried to save as much energy as I could for the second moto to give it everything I had, because second is as good as first in the first moto. Pretty much what my mindset was going into the rest of the day. It all panned out pretty good. It’s good to get the win with a round to go. I was kind of putting a lot of pressure on myself to execute it. It’s a lot of weight lifted off my shoulders. I think everyone around me expects this of me. Definitely good to put it behind me and try to do the same thing this weekend with a little bit less pressure.

You mentioned several times you really just like this track. You vibe well with it. Was that really the difference-maker today?
WW Ranch, this track, and the next one [Pala], I think I won one and got second at both the other ones. So all three of these are good tracks for me to end up on. It has something to do with that, but we’re really starting to click. It’s too bad that it took this long. Just stoked to get the win here. This place has been good to me. I’ve been on the podium the first two years here and I got my first moto win here. I don’t know what it is about the altitude that was so different. Maybe because it’s motocross and not supercross, but at Salt Lake I struggled so bad with the altitude. It didn’t really seem to phase me today.

How frustrating is it that you’re getting your pace now and the season is now ending?
It’s frustrating, but at the same time it’s a relief. I don’t like ending the season with nothing to show. Better now than never I guess. We have a shorter series this year, so definitely a little bummed on that. Would like to keep it going. These guys are riding great. We had a great battle in moto two. All I could hear was the #6 behind me. I tried to capitalize on what I was doing wrong, because he got up next to me a couple times. He really pushed me to my limit in that second moto, so he was riding great. I was able to keep my pace through the end and that was key. Moving to next weekend, a little less pressure. I really wanted to get this overall win before the season was over.

You and Shane [McElrath] are battling for third in points. Is there any bonus money involved with that with you guys?
No. If it was 2018, then yes. That would be when I would get a little pay, but now no. There’s nothing on the line for me money-wise except podium bonuses, which is what we’re going for. It just feels so good to get a win and to give it to the team. They’ve been working hard with me.

After next week we have a pretty much undetermined off-season. Who knows when supercross will pick back up and everything. What’s the plan for you? How much time will you take off before going right back into ’21 prep?
If I’m going to be honest, I think the plan for me is to get surgery right after Pala. I’ve had a pretty banged up shoulder. I had an AC joint separation, so that’s been bothering me. I had a previous surgery on it, but it’s at the point where it’s just not feeling right. So I might just get that quickly fixed up. I feel like now is a good time to do it since we don’t know what’s going on for next year yet. It shouldn't be too long off the bike and we’ll get back into the swing of things when I feel healthy enough to do so. But as of right now, I think that’s going to be the plan.

I hadn’t really heard that much about that injury. Has this been something that has also held you back? Is this something from one of those pre-season crashes that kind of just dinged you up?
I had a crash in Houston 2018 in supercross and that put me out for the rest of the supercross season and I ended up doing the Pro Motocross championship that year. Obviously me and Jeremy [Martin] came together at that one round. I ended up getting hurt there too with my shoulder and it hasn’t been the same since. I’m going to try and get it fixed up. It’s a bummer, but we all deal with this kind of stuff so I hope to be back soon.

How big is it to end the season on a good note going into the off-season? How much better do you think you’ll feel now that you’re ending at least on a positive note?
Yeah, that’s just the thing. Like I said, there’s a lot of pressure on me to win. I put that all on my shoulders. So to get this out of the way is pretty big for me. I didn’t really want to go into the off-season without the results, maybe I’m going to set myself back even more. I feel like I’m at the top of my game now and I feel like I’m competitive. So this definitely makes the decision I feel a little bit easier.

You do well on this track usually, but did it seem different than previous years?
Yeah. We’re going to get a different racetrack every year, but it was definitely like Jeremy [Martin] said a little bit more flat and choppy. It seemed like it had parts of the track good and other parts of the track were just flat. Nothing really would form as far as ruts. It was a little bit of both. A couple of sections had some pretty gnarly ruts. It was good and bad. They could have done a little bit better job ripping it, I feel. All in all, you race what you have. You show up at a racetrack and you race.That’s what happened today.

Can you talk about fending off Jeremy in moto two?
We got side by side a couple times. I’d look over. I was just playing defensive at times. I was trying to find a better flow and trying to learn from him a little bit. I knew he had a little bit more pace than me early on. So I was kind of just riding my own laps and when he got next to me I would have to be defensive and take the right lines. He was riding really well. It was a good battle. I think the fans were enjoying it.

You might be the first person to ever have their dog with them on the podium. We do have some more distance on the podium than usual, so that’s pretty unique. I don’t think anyone’s ever been able to do that before.
I figured why not? I brought him with me. I just took him up on the podium. I don’t think anyone’s ever done that before. It was cool. Maybe not an every time thing, but since he was there and I got the win I figured why not?

You’ve got a pretty good track record between supercross and motocross of finishing inside the top three in points, and now you have a shot at that. Is that important to you?
Yeah, it’s important. I’ve been third the last two years in the motocross series, so why not make it another third? It’s good. Been pretty far off the top three, so this definitely helped me out today. It’s not a big focus for me. I’m just trying to do the best I can each race and the points will come with it. We got one more race and we’ll end the season strong. Just going to give it everything I have again and try and make the best of it for this last round.