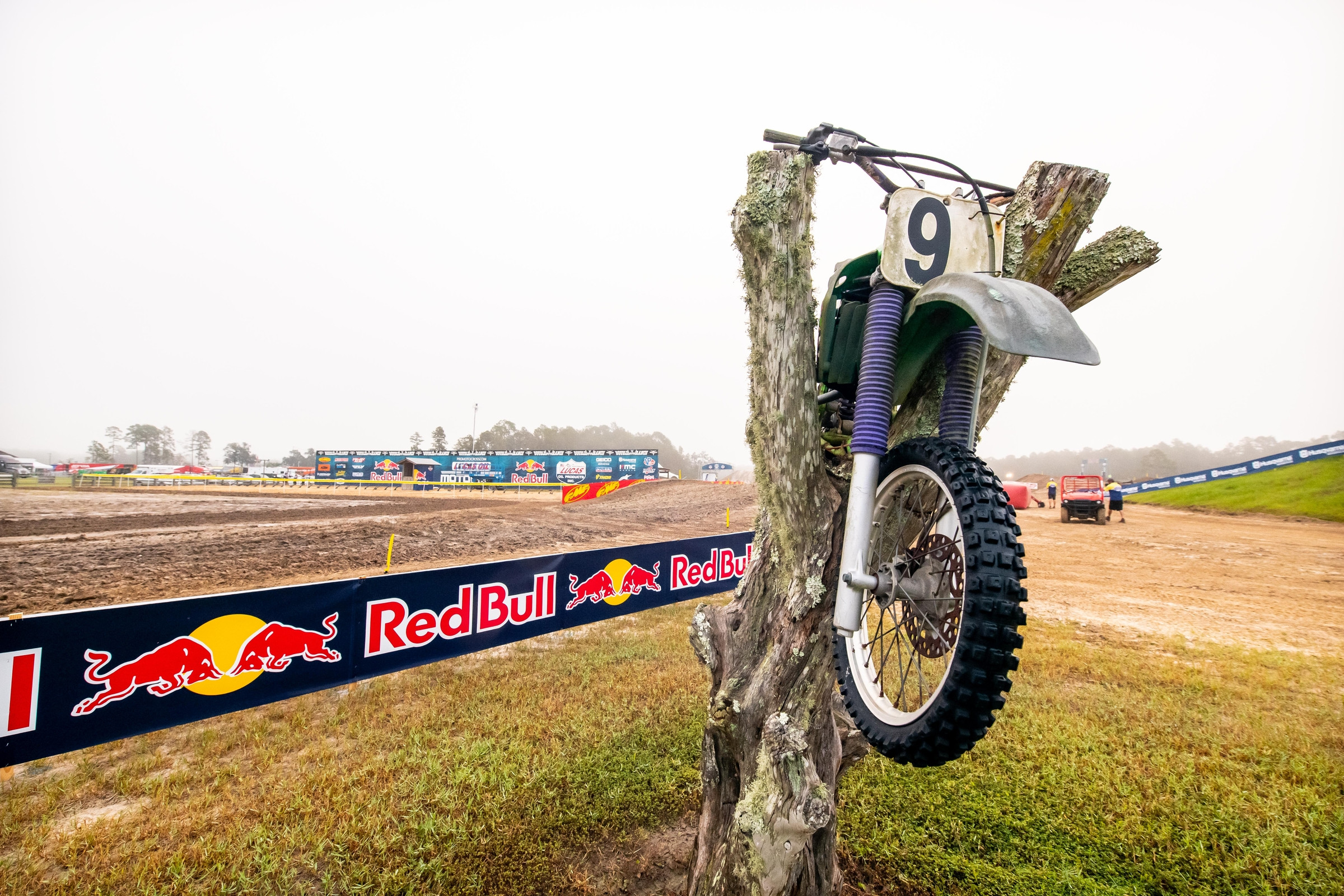 This weekend’s race at WW Ranch Motocross Park was maybe, outside of the massive mudder at Loretta Lynn’s 2, the toughest test for the teams and racers. The temperature in Florida was up there, it was basically a sand track, and outside of those special people who sit in an air-conditioned trailer all day long on their golden thrones (AHEM WEEGE), it was a tough day.

I know we have two more rounds to go here and I know that I haven’t been to the last two races (I’m back for Denver!), but I know you dear readers have a lot of questions. Luckily for you, I have the answers.

Question: Wow, that was an impressive ride by Zach Osborne, huh?
Answer: Yes! That was Osborne’s second-best ride ever after the Las Vegas SX 250SX finale from a few years ago. I do not care that Zach himself said that his RedBud 1 ride was better (two holeshots and riding by himself was better?) nor a couple of 250 Class motocross races he said (boys class to mans class, everyone), this ride was all-time for the #16. Third to first late in moto one, passing the wonder kid, then holding off a hard charging, frothing-at-the-mouth Eli Tomac in moto two and almost doubling your points lead? Yeah, this was the stuff that heroes are made of and I don’t care what the hell the hero in this story says. That was awesome!

Question: How bad was Marvin Musquin’s takeout on Adam Cianciarulo in moto two?
Answer: Not to get into this again but I’m just not sure how you watch this:

And think that it was just a racing incident? AC’s in the lead, he’s looking to the inside of a narrow berm and then a KTM comes flying in from the outside to take him out? Adam’s just supposed to shrug his shoulders and say that it’s a “racing incident, nothing to see here?”. I’m sure Marv regrets his move and it’s not dirty per se, but this was greasy, there’s no doubt about it.

Question: Oh hey, look at Eli Tomac, is he back?
Answer: Wow, the old Eli Tomac was back in the second moto as he took his usual not-so-great start and almost won the moto! I don’t know how Osborne held him off, but he did and that was Tomac’s best moto since Ironman way back at round three. He’s not been the same dude; I mean his moto one where he started poorly and came to sixth was about what we’ve seen this fall. He’s not been the same guy since we started back up about a month and a half after he won his first 450SX title and although we don’t talk much (actually we don’t talk at all), I’m going to give you my “blame pie” for Eli’s results this summer. I think it’s 45 percent “I won the 450SX title & I have three 450 Class titles (in a row) so let me back off my grinding a bit” and then it’s 30 percent “It’s not hot out, all these dudes are way fresher than usual” followed by 20 percent “I’m a new dad, it’s awesome to spend time with my wife and kid” with a dash of 5 percent “I don’t need to win this thing.” There’s no part of me that doesn’t think Tomac won’t be back to 100 percent pure green Monster (see what I did there?) by SX 2021. Oh, and I give 0 percent to the theory that the PulpMX Show caller had that he’s been elk hunting and not riding this fall.

Question: Why was Dylan Ferrandis so damn good?
Answer: Ferrandis really put on a clinic at WW Ranch and his speed and fitness really wore down everyone else there. Funny how very early in moto one he actually looked like he was vulnerable, right? His win at his rival Jeremy Martin’s track last week probably gave him some serious confidence on a surface that he knows very well. He worked everyone this weekend and it doesn’t help his competitors that those Yamaha’s are so damn fast, right? He’s the total package and going into Thunder Valley this weekend at elevation, well you might want to print out the label to his house for the championship plaque. Don’t mail it yet because anything can happen of course but get the label ready.

Question: Sooooo, J-Mart?
Answer: Well he didn’t get the starts he needed (Monster Energy/Star Yamaha guys did though!) and looked to me like he fought hard all the way to his 3-3 finishes. You’ve got to feel for Jeremy at times, he certainly looks the part where he’s trying his balls off and pushing hard but he’s not quite where he needs to be. A tick off Ferrandis and that’s all it takes.

I don’t want to talk about this video at the 5:03 mark either.

Question: Why not?
Answer: Because that’s basically what Marv did which I said was greasy but this ON HIS OWN BROTHER! Oh, poor Troll Train, he didn’t deserve that. Watching that GoPro though, I have to say that “we” need to do a better job of staying on the track. I hope Greta ripped into Jeremy for this move by the way.

Question: When is Chase Sexton going to win?
Answer: Well, the Honda rookie qualified fastest again (second race in a row he’s done that) and I predicted that he would get a moto win here before the end of the year but maybe I’ll hedge on that for now. At WW he was right there in moto one before being worn down by Osborne and then a mistake on the last lap cost him third to Musquin, and moto two he didn’t sniff the lead group. Hey man, if you qualify fastest more than once, you’re good enough to win. He reminds me of AC in SX where you know it’s coming but in Adam’s case, it never did. So, let’s just move onto 2021 for Sexton and say he’ll win then, yeah?

Question: Mad Max’s use of the chicane was sweet, right?
Answer: Yeah, don’t give me this stuff about how someone wanted to protest him afterward. Max Anstie took the split lane and made it his own with the sweet cut across move. Don’t build split lanes if you don’t want the guys to figure out the best way around them or throw up stakes/banners there and tell the racers they can’t do that. But if not, then golf claps for Anstie out there. His first moto was very impressive in case you were wondering, as he came from way back of 39th to close to the top ten. Have “we” not talked about Anstie enough?

Question: Did Chiz Chiz?
Answer: Oh god yes, Kyle Chisholm showed up at the roughest track of the year not having ridden much since the last SLC SX and he went 14-12 beating dudes who have been racing every week. He Chizzed ALL OVER that WW Ranch track.

Question: How is RJ Hampshire still alive?
Answer: Uhhh, yeah, I’m not sure but somehow after that crash he took his still-new ACL back to the line for moto two! Rookie Mason “Speedy” Gonzalez, who did the same thing wasn’t able to line up for the second moto and it’s understandable. Back to Hampshire though, he’s always been a pretty gnarly guy, so it was good to see him line up. Like Chad Reed with the Chadapult crash, it will be interesting to see if Richard can get back to where he needs to be this weekend. Stuff like that can scare a man y’know.

Question: The TV broadcast showed the team repairing Hampshire’s bike until some guy stepped in front of the camera. How lame is that?
Answer: Yeah, hella lame. I’ve been there as a mechanic fixing a bike with a camera there and I totally understand teams wanting to be protective of their technology (ever see a Honda with the seat off without a rag covering the filter?) but from outside the tent, filming some standard bars/clamps/wheel repair stuff I hardly doubt you’re going to see anything. We’re just trying to show the fans what you’re doing here Rockstar Husky, calm down.

Question: Hey, what about Justin Barcia in that second moto?
Answer: Bam Bam crashed early in moto two and needed some repairs so he just headed straight back to the pits. Some talk about how much of the track he skipped to get to the mechanics area, and he entered back in the race in last. From there he rode great to get up to 13th but what about all that track he skipped? It was quite a bit for sure but like, whatever, I guess.

Question: Are you still onboard with the fall nationals?
Answer: OH YEAH! I mean, it’ll never happen because this would involve everyone working together but the positives of it, to me anyway, outweigh any of the negatives. Let’s do it!

Thanks for reading the column this week, as I said just two more to go in a crazy 2020 SX/MX season. Email me at matthes@racerxonline.com if you want to chat about this or anything else please and thank you.