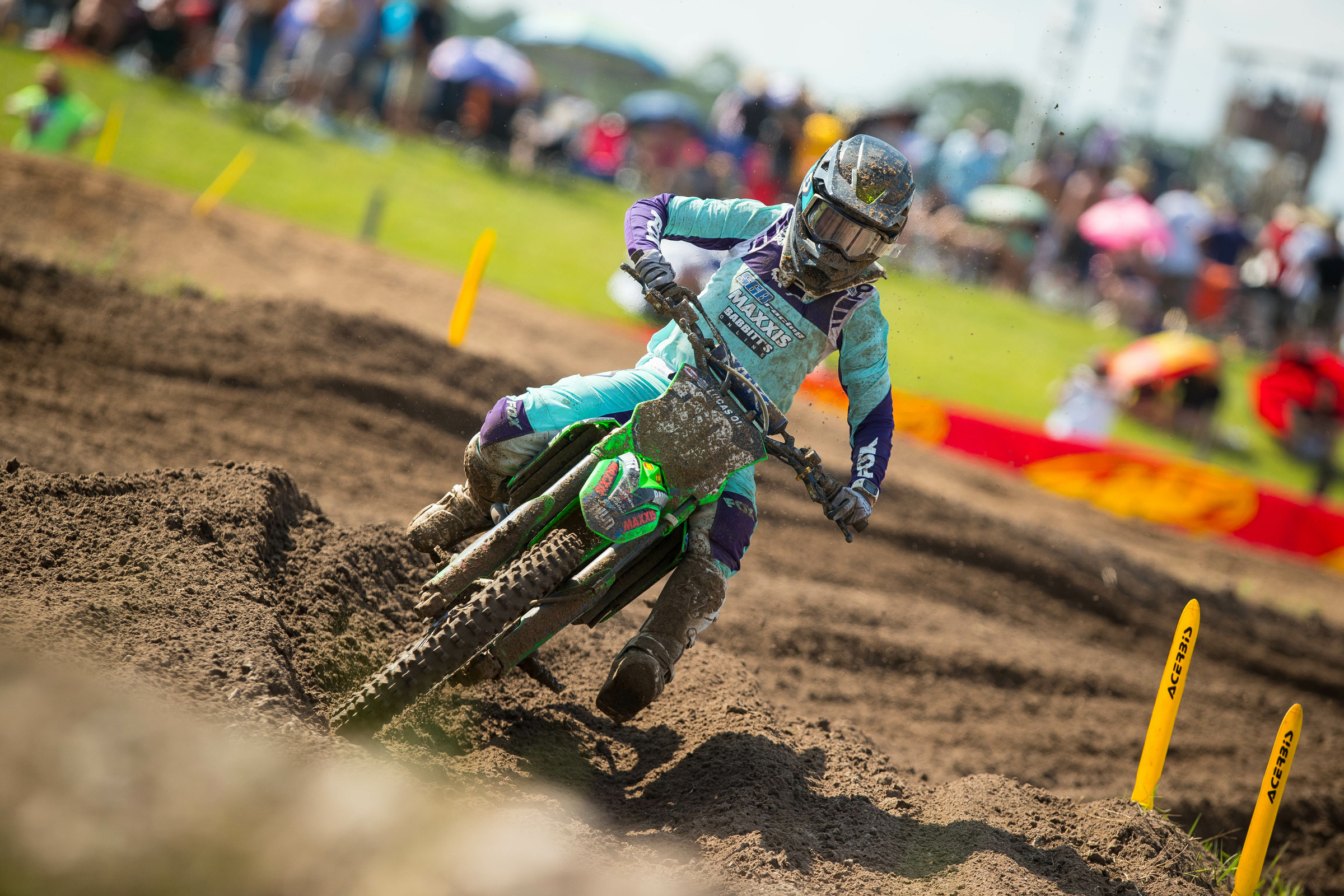 Jordan Jarvis is 19 years old, and is now the first female to make it into an AMA National Motocross event using the modern qualifying process. Doreen Payne made the grade in Lakewood, Colorado, in 1983, but the nationals were split into three classes per day that year—125, 250, 500—and there wasn’t timed qualifying. Payne made history and that’s a heck of an accomplishment, but Jarvis has been attempting to qualify via lap times for a little over a year now.

It didn’t happen the way she wanted it to at the WW Ranch National. She snuck in as the fifth alternate for 250 moto two at WW Ranch, after taking ninth in the 250 LCQ. Five riders didn’t go to the line for moto two, so Jarvis got a gate and raced to 32nd in the moto.

That’s not the most impressive thing, though. What has always stuck out about Jarvis—now a six-time AMA National Champion at Loretta Lynn’s—is that she is the rare teen motocross pro who went to regular school, didn’t go to a training facility, and essentially grew up riding only on weekends. Now that she has graduated high school, she’s able to start riding more. While Jarvis has already accomplished something big, there’s a chance this is just the start.

She hopes so. While she was pumped and amazed to race in a full-on national moto, the goal has never been to make it as an alternate or even though the LCQ.

“It’s unbelievable,” she says about getting to race. “It’s not the way I wanted to do it. I didn’t want to go through the LCQ and I definitely didn’t want to do it as an alternate. But I definitely think this is going to help me for the next couple of races—now that I know what I get to look forward to and I know I can race the same track the guys do, it makes my confidence go up a bit. So many people have reached out to me and congratulated me, it feels good. It’s such an experience.”

The alternate drama added to that experience. Each week, riders ranked just outside of the top-four in the LCQ get geared up and head to the gate, hoping enough riders skip moto two (due to bike problems, injury, or illness) that they can get in. Jarvis has been doing this week after week.

“It’s not fun to wait around and see if you have a shot because someone’s bike breaks or, God forbid, someone gets hurt. I’ve been close before but didn’t get it, and that’s definitely heartbreaking, and it looked like that was going to happen again. I didn’t actually get on the gate until two minutes before the card went up! It was an adrenaline rush. A lot of people asked me if I got nervous, and I said I didn’t have time to get nervous! It was a dream come true to get to race against factory riders and past champions, someone like Jeremy Martin.”

Once she was out there, Jarvis got the taste of 30-plus two at the highest level, against the fastest riders. She learned quite a bit from that.

“Watching those guys actually lap me was insane,” she explains. “I was like, ‘Wow those guys are going so fast!’ It helped me learn some lines and improve my lines, but it was definitely shocking. I was like, ‘Wow, I can’t believe I’m out here.’”

Long motos are actually Jarvis’ strength. The trouble is that one-lap qualifying speed is actually one of her weaknesses, and she needs a top-36 lap to avoid the LCQ and go straight to moto one.

“The goal is to make it through without having to go to the LCQ,” she says. “I’ve always been better in races than in qualifying, and I’ve always been able to go the distance. Unfortunately, my best laps are usually toward the end of the race, they don’t come early enough, and that’s what you need to do to qualify. There’s definitely an art to it, and we’re working on it.”

The work comes courtesy of the SGB Racing/Maxxis/Babbitt’s Kawasaki team. Owned by SGB Suspension’s Jason Butschky, a retired police officer from Baltimore (night shift! Yikes!), I will personally vote for this team as the most hilarious in the pro pits. With Alex Ray, Justin Rodbell, and Jeremy Smith making waves on their privateer machines, this pit is never short on personality. The to-do list is never short, either. You’ve got A-Ray pushing bikes to the limit and requiring quite frequent parts changed. Butschky adds that Jarvis isn’t that far behind A-Ray on the punishment she can put on a bike. At WW Ranch, the team needed to give her an engine swap in the morning, which is the second time they’ve had to do that this year. Butschky, meanwhile, is subbing as a mechanic for Rodbell, so he was busy prepping Rodbell’s 450 for moto two when he realized Jarvis never came back to the pit after she headed down to the gate. It’s only then that he realized she had made the moto!

Check out this interview we did with JJ last summer following the 2019 High Point National, when she first started her journey of qualifying for a national.

Again, the hope is that this is just the start. It’s Jarvis’ first year ever riding and training full time. She’s 19, which makes her one of the younger riders in the class. She has one eye on getting better on the track, while also considering the bigger picture for her own life.

“I was a full-time student until I graduated and I only got to ride on the weekend,” Jarvis said. “I was a full-blown weekend warrior. Now I’m full time riding, but I’d like to start online college for sure. I figure maybe I should wait until the whole COVID[-19] thing blows over until I start college! I have some plans to go to Europe next year and maybe ride WMX over there. So we’ll see about college—who knows how Wi-Fi service is going to be if I’m racing over there!”

Jarvis is plotting her course. She knows she can help inspire other girls to ride, and that’s a great thing. But when she gets to the track, she isn’t thinking about the female angle. The goal is to be a racer like anyone else—to work hard, to improve, to just keep getting faster and stronger. The female racer part? That’s just a bonus.

Jarvis on the gas during qualifying at the 2019 High Point National.

“I’m more focused on myself,” she says. “It’s definitely a cool story to add to it when I make it right out of qualifying and don’t make it out of an LCQ or as an alternate, but I do this because I enjoy this, and if I want to do something I just want to put my head down and be the best that I can at it. It’s more for me and to prove it to myself, and that will help me with other parts of life later on.”

Along the way, she’s aware she’s going to make some headlines and inspire some others. Again, she looks at the bigger picture.

“I really do hope that there are little girls, or teenaged girls, really anyone, that looks up to me and gets inspired to ride. Unfortunately the women’s side of motocross doesn’t have what it used to have, and even when it did, it wasn’t great. So maybe I can inspire more girls to get involved, and maybe we can bring the pro series back someday. Motocross is hard, but there’s nothing else in the world like it. You meet the best people, you meet so many friends that turn into family. I’m hoping to inspire more people to get into the sport and enjoy it like I do.”