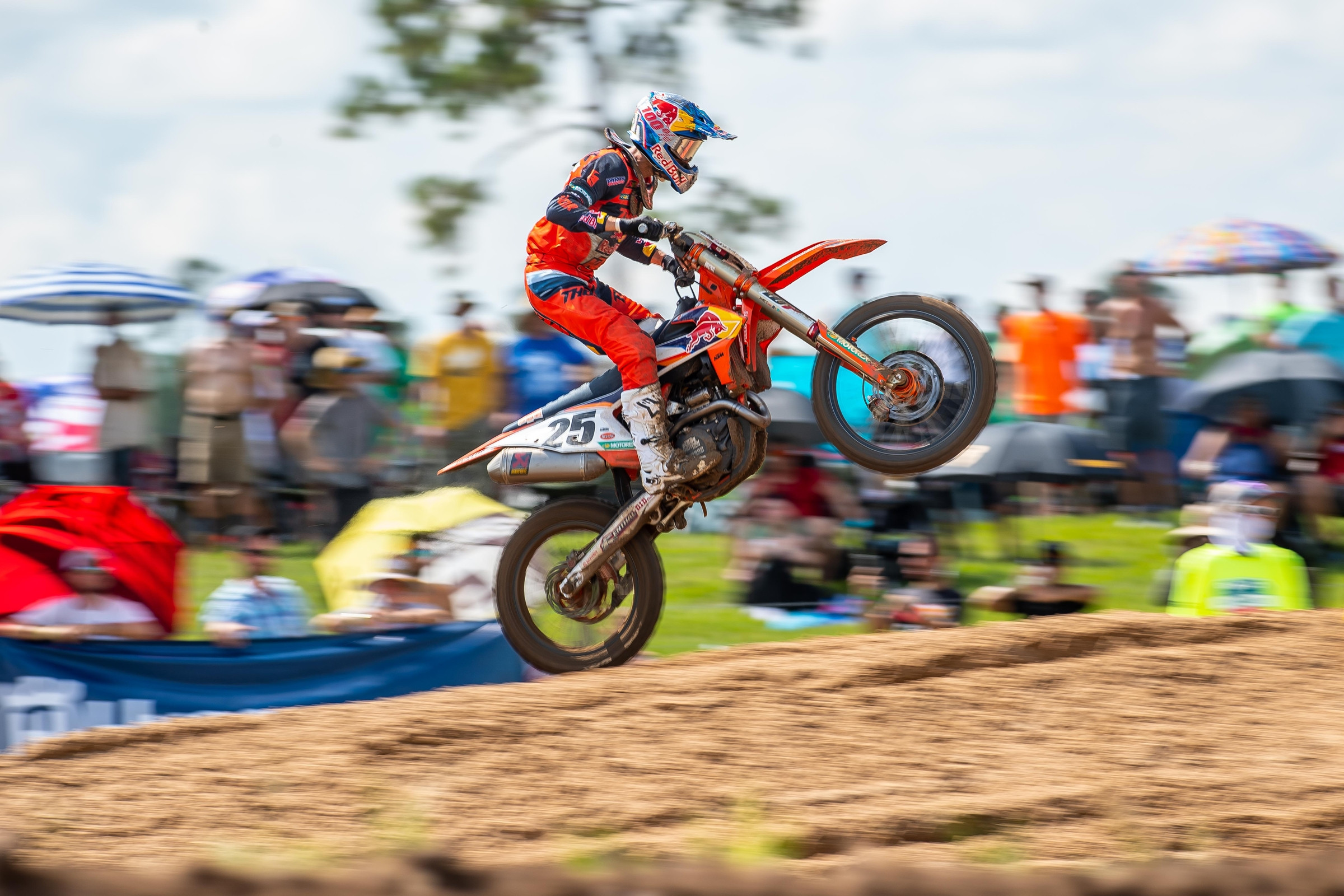 For a moment all looked lost for Marvin Musquin, after a brutal practice crash left his afternoon in doubt at the WW Ranch National. He recovered to run up front in both motos, recording 3-3 scores to take second overall. Marvin talked about the crash in the morning, his run-in with Adam Cianciarulo battling for the lead, and plans for the final two rounds.

Racer X: Marvin, overall, I’d imagine you’re pretty happy with your day, especially considering that crash in qualifying. Do you want to walk us through your day and how everything was for you?
Marvin Musquin: That was not fun going into the motos! But it is what it is. Especially the hardest race of the year, being in my situation going into that race was very tough. There’s no giving up. I just had to go out there and try my best. That’s what I did. First moto I was in fourth place trying not to get gapped too much from the top three. I was there. Obviously, I got gifted on the last lap and got third which was really nice. Then going into the second moto, once again I was sitting on the line and thinking about that the moto was going to be tough, but once again we went out there and actually, I got a great start. Then I got into the lead when I got around AC. I felt like I carried a lot of speed into the rollers compared to him. I was on the outside and then I came in faster than him and I was like, let’s give it a try. I know it was a bummer because we hit each other and then he went down, and I didn’t. I just felt like ‘Let’s give it a try and see how it goes.’ I know it was kind of sketchy, but I feel like we’ve seen a lot of action this year already with other riders. So, no surprise. I got into the lead and then obviously after that I went back to third. I gave my best. Energy-wise I was not 100 percent, but I was trying to ride as smooth as I could. Going 3-3 for second overall is great today.

Marvin, was there a consideration of not racing today? I assume you went to the Alpinestars [medic] truck. Did you guys talk about it?
No. Like I said, there’s no giving up. We just go out there and try our best and see how it goes. Obviously, I could have gone out there and done a lap or two and if it was bad then maybe stop, but no, I felt actually pretty good. Obviously, it was a hard hit. I hit everything. My stomach, everything, but I was all right. I proved it because I was able to do two motos in the heat and be as consistent as possible and get on the podium, so that was great.

Let me ask you about the track. A lot of people were saying this track’s not very good, there’s no passing, but we see in the 250 race guys going three wide. What did you think of WW Ranch and year two? Do you consider it to be a long-term track for the series?
Yeah. I love it. Obviously, last year was great. I ended up first overall, so that was amazing. I think it was a good racetrack. It was very fast in practice and I was a little bit bummed about it. We know this track and I feel like they could have slowed it down a little bit more. Obviously, the bumps and the ruts made it slower, which was good, but it was still for sure in practice way too fast. I felt like you had to kind of send it and it was not much technique. It was more technical during the motos because of the bumps and the ruts, which was good. I’m glad it ended up that way.

Marvin, for some of just the viewers out there, do you have any pro tip how to get through some sand rollers?
Those sand rollers were really tough. They were bigger than last year. Obviously, you have to keep the front end high. You don’t want to drop the front end. We were able sometimes to clear them by jumping them or sometimes wheelie them, but today it was tough. But sometimes I felt, like through that second moto I was better than AC. I was able to carry more speed. I think the best way today was to try to seat bounce like I was doing, and then to clear doubles. But the pro tip I would say keep the rear down and the front end up. You don’t want to drop the front end.

Marvin, you’ve got thirty points to make up. We got Thunder Valley and Fox coming up. What do you think of those two tracks? Is there any way you can maybe close on Zach?
Yeah. That’s the goal. It’s been a crazy season. First of all, I was just pumped to be racing, and then we got some podiums. Then I had some bad second motos, like at Red Bud. I felt like I was doing pretty good but missed two podiums at Red Bud. I had a huge crash at Millville the second moto and ended up tenth. I’m glad I finished. I wasn’t sure to finish. So, a lot of ups and downs, a lot of emotions. To do what I did today was good. I wasn’t sure I was able to do two consistent motos and after having a crash I didn’t know how physically I would be. But it shows that I would never give up and tried my hardest. We never know what can happen, especially in this sport.

How did you get by Chase Sexton at the end of moto one?
He crashed after that triple before that big step-up before the mechanics area on the far side. I’m pretty sure he landed and then tucked the front. Maybe he landed into the bump or slid out. I saw yellow flags and he was down, so I was able to get around him.