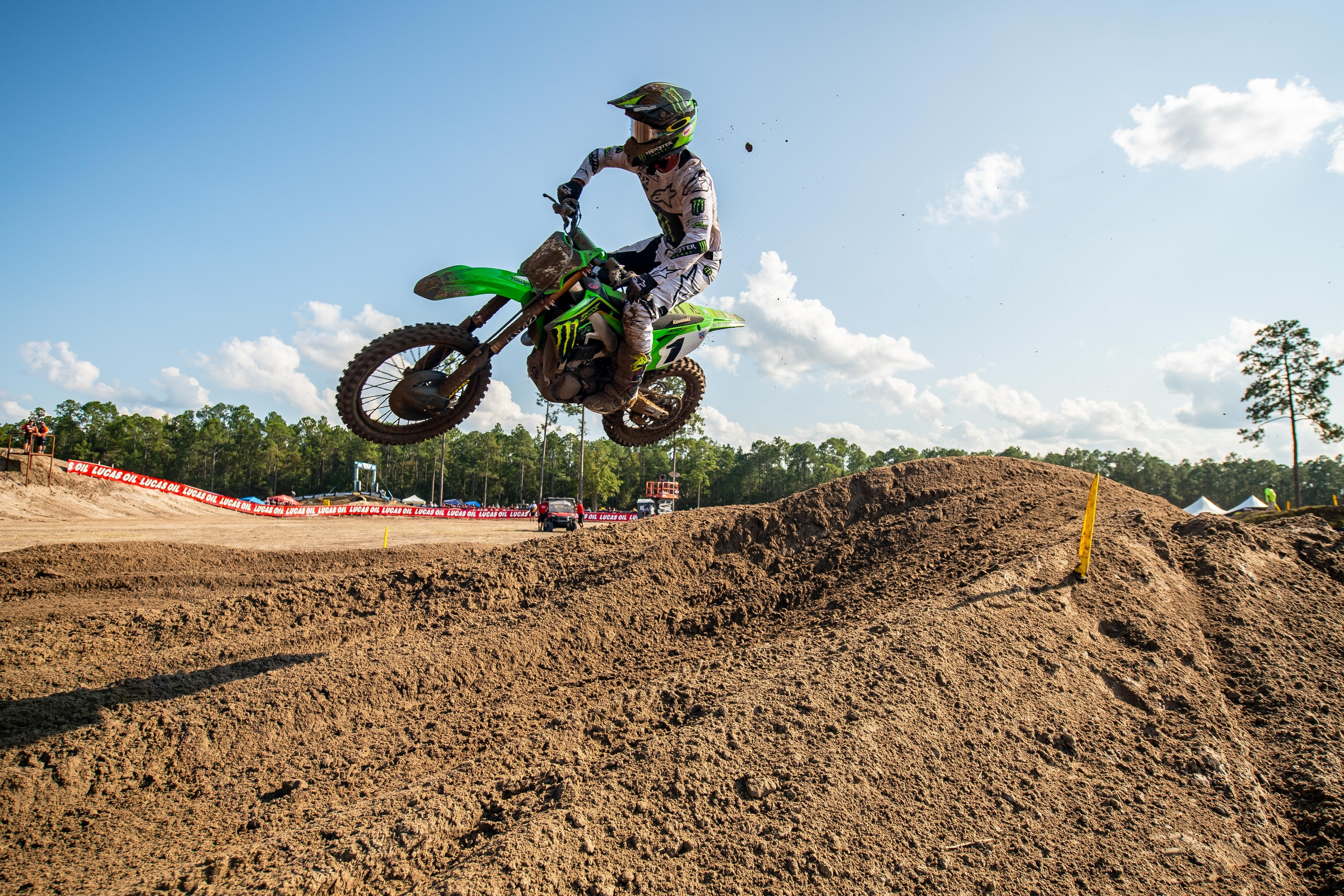 There was a sighting of the typical Eli Tomac in the second moto at WW Ranch Motocross Park in Florida, as the Monster Energy Kawasaki rider put in a huge charge from outside the top five to second and nearly stole the moto win from Zach Osborne. The 6-2 moto scores resulted in Tomac’s third overall podium of the year, his first since round three of the championship in Indiana. He spoke with the media after the race.

Racer X: Eli, third overall on the day. Overall a positive day for you. A great come-from-behind ride in the second moto. How was your day, and does this give you some confidence heading into your home race at Thunder Valley?
Eli Tomac: That was big for us just the second moto there. The first moto was kind of what I’ve been going through these past few races which is getting behind from the get-go and then not being able to push forward at all. So, moto two, much better that way, much better riding. I felt better. It’s just been a little bit of a funk. Like I said, moto two was a lot more like it.

As you know, we morons in the media come up with a million theories. You’ve won so many races and then you get a couple fourths and fifths and we’re guessing, it could be this, it could be that. Is there anything you can point at, or is it just literally like you were saying, I’ve been in a funk? Is there anything you changed or figured out today? It definitely looked more like running to the front like you usually do in moto two.
Yeah, there was no changes between one and two. I don’t know what was going on. All I can say is the level has been elevated, for sure. There’s a couple more guys in there now. It’s hard to point the finger at one thing.

What does that do for you to finally get a little bit back on track? It wasn’t a moto win, but it was definitely riding well. Does that help you a little bit?
Yeah. It was nice. I was in a bit of a rough place there. I wasn’t able to figure it out for a few races there. Nice to know that I could somewhat get to the front again.

The first half of the moto, you were there behind [Chase] Sexton and [Max] Anstie. Did you feel something come together, actually? Because the first half of the moto was just okay, and then it really started to happen. Did something change there, or was it just the way the moto played out?
It was both. I started feeling better, but guys were going slower. It was like the first race guys actually faded, even though I faded in the first moto. It was kind of a normal national where guys start dropping off in the second moto.

I’ve been asking a lot of guys this. We’re going deeper into the calendar than we were supposed to with the big delays we had in racing. Do you notice that at all? Does it feel any different? Does it seem weird? Because we’re going now probably four weeks, I think past where we would have been if we had ended in August.
Right now it all just feels kind of like a blur and a blend. I think what’s going to come fast is supercross. Everyone is going to take a couple weeks off but then it’s like, holy moly. It’s already the first week of November. So, I think that’s when everyone’s really going to get their reality check. That’s when things are going to come fast.

Did the two DNF’s have any mental effect on you coming back and almost maybe bring you down? Maybe you just didn’t feel like you had it for the rest of the season after that? Did it affect you in any way mentally?
Yeah. It’s kind of a punch in the gut, but it’s also racing. So that’s what I try to look past. It’s just been weird. I’m not sure. One thing I can point to is my starts. There’s two extra guys in there this year. There’s Chase and there’s Adam [Cianciarulo]. They’re going really fast right now. That’s been different. Obviously, Zach is riding at a great level. There’s really no one slacking or falling off. So, when I’m sitting there buried in tenth, I lose 15 or 20 seconds the first two laps and it’s over. I haven’t been able to shred to the front. So, to me that’s what’s been a little bit different this year.