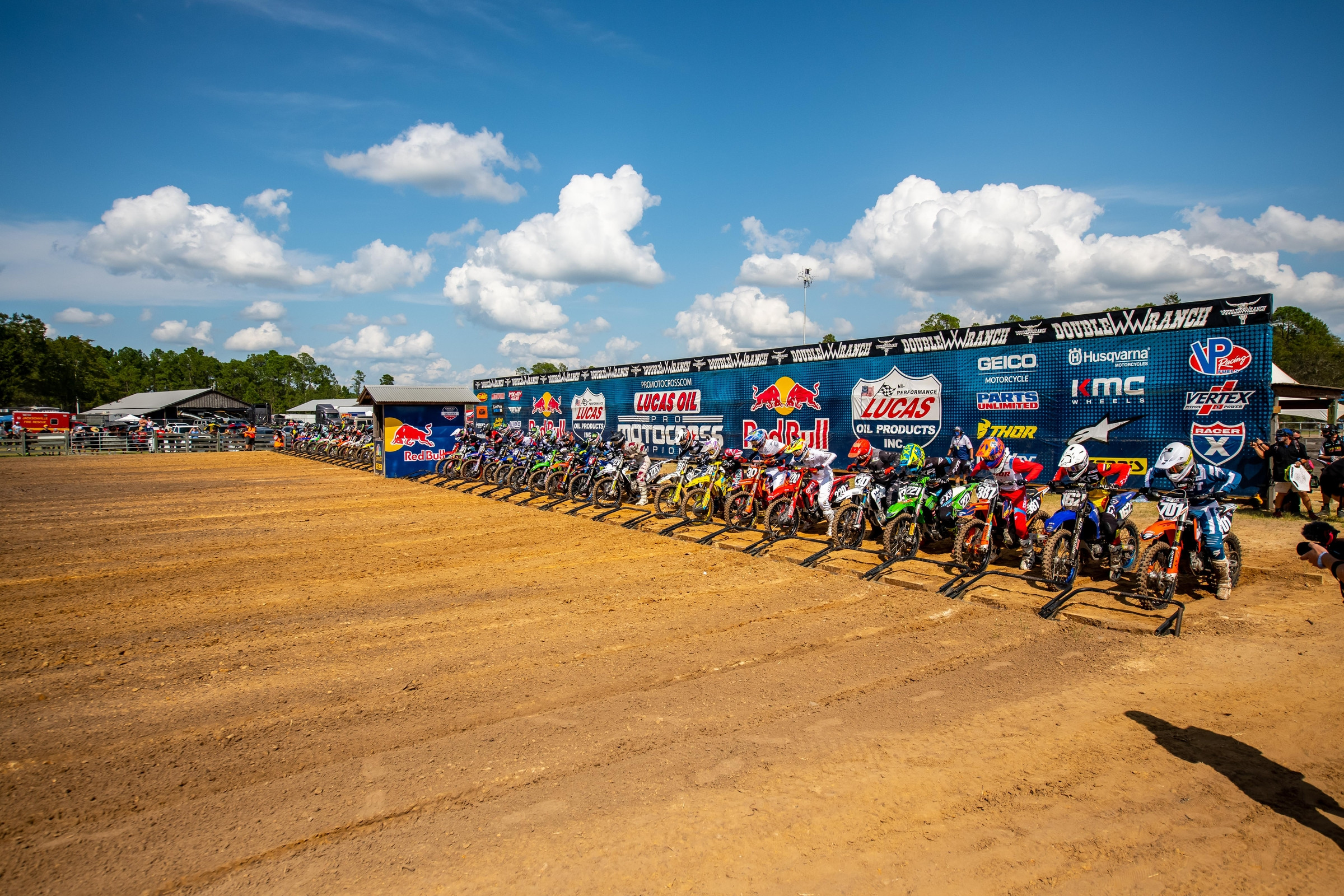 Round seven of the 2020 Lucas Oil AMA Pro Motocross Championship went off this weekend at WW Ranch Motocross Park in Jacksonville, Florida. With the first truly hot race of the season, we fired off questions to long-time pro Jason Thomas to hear his thoughts on the tricky conditions that Florida provides.

When you get to Florida, people think "sand." But explain the different types of dirt there, from the sugar sand to the black sand to the orange clay...and what each is like to ride.

Florida indeed has many different types of dirt. Sand is overwhelmingly the most common soil found but there are areas rich in “veins” of clay. For motocross tracks, clay is often trucked in at a huge cost if there is not any on site. WW Ranch has employed this as well, adding clay to many jump faces in hopes of adding more consistency.

Riding sand is a learned skill. Allowing the front tire to float across loose soil can be unnerving for those that grew up on the more stable hard pack found around the country. To further the difficulty, WW Ranch has a hard base in some spots. That hard base can cause the rear tire to spin violently as sand riding is done at high RPM. Example: a rider hits a berm with hard throttle application, asking his motorcycle to pull him through the deep sand. On the exit of the corner, though, the sand shifts to a hard base without any real transition. As the RPM is still very high on exit, that lack of deep sand load immediately causes the tire to spin up very quickly. It’s a wild ride and can cause the rear of the motorcycle to act unpredictably. One way to offset that is to “short shift” on the exit of the corner, effectively reducing RPM as the tire reaches the harder base. That is not always a perfect plan, though. If the rider shifts too early, his forward drive will be swallowed up by the deep sand. With the improvement of ECU traction control methods, this is becoming less and less necessary. It was a very important skill for two-stroke riding, but four-strokes have taken some of the relevancy away. Regardless, managing traction as soil changes is a key factor in lowering lap times.

Can you get over the back of the bike like you do in normal sand here (let the front wheel float) or do you have to weigh the front at times?

It’s always important to weight the front on corner entry, regardless of the soil type. On exit, though, leaning back is going to be much more important in both sand and extreme hard pack. It sounds counter intuitive that the extreme opposites would require the same technique, but the reason is the same. In deep sand, the rear tire is spinning through the fine soil particles and leaning back will add weight and “bite” to propel forward. In hard-pack cornering, the rear tire is spinning across the hard surface and looking for something to drive forward from. Leaning back adds weight to the rear tire and forces the tire into the ground versus allowing it to spin up more unpredictably. Two different catalysts for leaning back but both necessitate it.

Everyone ran a paddle rear tire, Dylan Ferrandis ran the sand spike front. What's it like when the sand tire hits a hard base or hard section?

The difference is noticeable when comparing to a tire that most readers would normally use. Instead of a smooth transition and traction being relatively unaffected, the scoop tire (paddle style) will want to spin up much more quickly. It can be very erratic and requires anticipation. Knowing it’s likely to spin can be the difference between crashing and not crashing.

It certainly could be, yes. Anytime the rear steps out unexpectedly (spinning), the scoop tire is going to recover (regain traction) less quickly. In that particular instance, the rear end deflected off a bump under acceleration and Marv wasn’t expecting it. That kick to his left was followed by a nasty rebound kick back right (tire searching for traction along the way) at a very bad time. He was cresting that single jump with his rear tire spinning up wildly, creating a high-side scenario. When the motorcycle veers one way sharply, your body’s momentum goes with it. If the motorcycle whips back the other way violently, that mass will want to again go with it, but that extreme divergence is often too much to manage. An extreme amount of force is unloaded all at once and it usually results in a rider being spit off the motorcycle.

How much of this race just came down to straight-up fitness/endurance down the stretch?

I do believe it was a big part of the equation. There were not many riders that were able to hold their pace at the end of the second moto. The first half of the motos were all about speed, but the second half was much more about maintaining it. Spring Creek was a display of raw speed. WW Ranch was a display of strength, endurance, and preparation.

How did Adam Cianciarulo end up going down from the inside when he collided with Musquin?

My opinion is that Musquin is not at fault here. When on the inside, it’s very difficult to place blame on someone else when entering a turn. I do think Musquin caught AC by surprise, though. AC probably assumed that there was no way Musquin would try to beat him to the spot while also on the outside. That seems like a recipe for Musquin being punted into southern Georgia. As Musquin dove for the line, he and AC tangled bars/arms and sent both flying. Unfortunately for AC, he ended up on the ground and Marv didn’t. They both went for the same line and 99 times out of 100, the rider on the outside is going to lose that game. This time, AC lost.

AC and Musquin in the second moto.

Dudes were hauling in some sections. Several said they were surprised how fast and open the track was. Do riders get scared at a certain speed or do pros just pin it and not even realize?

I have ridden tracks that were a bit scary, yes. I don’t think WW Ranch would necessarily fit that description, though. The soft soil slows the pace considerably so I wouldn’t expect speeds to be that impressive on paper. The track was very rough, though, so any sort of high speed would become treacherous. I believe it was the combination of the track deteriorating along with open sections that required higher overall speed that made for a few nervous moments.