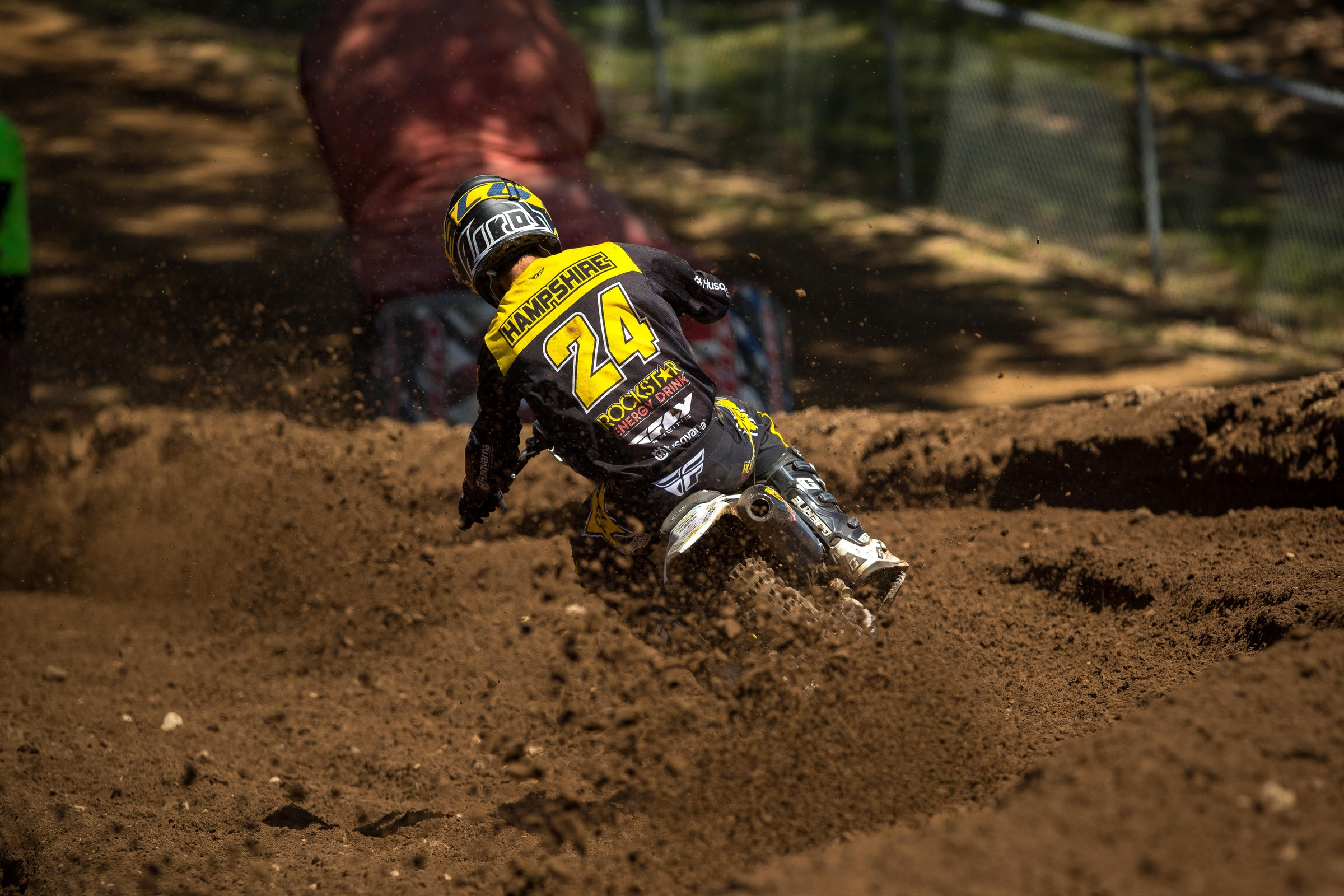 “I think it’s kind of going to be the tale of the tape for the rest of the season. I think there are going to be really pivotal rounds for me where I need to show up guns blazing and go out there and do the job.” Those were the words of Zach Osborne following Friday’s race at RedBud, and it described his flawless 1-1 performance perfectly. On a day where most of his competition struggled to find consistency, Osborne dropped the hammer, on the track and in the points, and now leads second-place Marvin Musquin by 26 points and defending champ Eli Tomac by 43 points. After RedBud 2 the season will be over half done, and if anyone wants to prevent Osborne from running away with this thing, they’ll have to make up a lot of ground on Monday. –Aaron Hansel

On Again Off Again

That’s the kind of relationship Tomac seems to be having with his incredible speed so far this season. And granted, a lot of riders would be thrilled with 4-5 moto scores (which somehow equated to sixth overall), but not the guy who’s won the last three 450 National Championships. Never mind the widening points gap to Osborne, Tomac still hasn’t even gone 1-1 this season, something that’s been commonplace in summers past. In fact, the champ has only won a single moto, something nobody would have predicted. Tomac will return to form at some point. Will it be the second round of RedBud? –Hansel

After the season opener it sure seemed like Dylan Ferrandis was in a position to wrap up the 250 National Championship almost before it even started. The Monster Energy/Star Racing Yamaha rider was that good at round one! But apparently Jeremy Martin didn’t get the memo. The GEICO Honda rider has won the last three overalls in a row, has won the last three motos in a row, and his worst moto finish so far is third. You could make the argument that Ferrandis packs a bigger punch in the speed department, but there’s no question that right now Martin is winning the war with consistency. With Ferrandis coming into the second RedBud banged up, how will this dynamic play out on Monday? –Hansel

With a 53-point deficit to championship leader Martin, RJ Hampshire’s title scenario is far from great, but also far from catastrophic. The tenacious Rockstar Energy Husqvarna Factory Racing rider is stubbornly refusing to buckle too, and any time the camera finds him it’s obvious just how much determination and motivation he’s riding with. He’s always going for it, whether he’s outside the top ten or all by himself in second, whether it’s the first lap or the last. He has podiumed this season—how long before he breaks through for a win? –Hansel

Shane McElrath was pretty vocal about wanting to win both the Monster Energy AMA Supercross 250SX East Region title and Lucas Oil Pro Motocross 250 National Championship this year, and he came really close to checking one of those boxes indoors. But things have gone a little sideways for McElrath in motocross—the Monster Energy/Star Racing Yamaha rider, while speedy and solid, has lacked the same pace as the lead pack at most races. Things were much better in the second moto on Friday though, as McElrath led the first seven laps before surrendering the lead to Martin. The bleeding stopped there though, and McElrath ended up with his best moto finish of the season (second) and was third overall. McElrath likes RedBud—is his performance in the last moto a sign of things to come on Monday? –Hansel

The series was not short of superfast Monster EnergyStar Racing Yamahas at the front, but it got yet another one when Ty Masterpool—remember him?—grabbed a huge holeshot and absolutely checked out in 250 moto one (his point to the heavens across the holeshot line was epic). Masterpool is just getting back on the bike after suffering a broken leg earlier this summer, but he held the lead for long way and secured his first-ever moto podium finish. Masterpool’s best finish in his rookie season last year was a fourth. This is only a one-position improvement on paper, but there are signs his gains for year two are much larger. Star Racing’s Wil Hahn told us Masterpool has put on a lot of muscle now that he’s another year older, and they were really impressed with what they saw from him during the week, which is why they sent him to race so early in his recovery process. Do we have another contender in the 250 class? –Jason Weigandt

What you would expect from young Jett Lawrence is spectacular speed but also huge mistakes and crashes. What we’re getting is solid, consistent rides inside the top five. Take away his bike overheating in both mud motos at Loretta’s 2, and the 17-year-old has been rock solid the whole time. At RedBud 1, he mentioned some gearing changes that helped his starts, and that put him right up against—but just off—the podium. Now that we know Jett’s full-time entry to pro motocross will be a solid build instead of a flash of speed, expect podiums to quite soon. -Weigandt

Masterpool and Lawrence battled it out for the final podium spot in the first moto, but eventually Masterpool held on for his first moto podium finish.

Motocross is unique to most major motorsports to where the riders actually practice on race-equivalent machines during the week. Practice motos two days after a race are common. But what about racing motos? We’ll find out how the boys feel come Monday morning, when they’re not just working out the kinks, but immediately into qualifying practice and then points-paying races. Friday’s weather wasn’t that hot, and the track wasn’t as deep or as rough as usual, which helped everyone save some energy, but there’s still a lot of unknowns with the double header format. Will the field be as fresh as they normally are on Saturday, or will we see some riders on struggle street? It’s a question that literally can’t be answered until the gate drops because this has never been done before. -Weigandt

There are no layout changes planned for RedBud 2, but this is motocross, so you don’t need to move the banners to change a track. Throw in a weather change or a difference in track prep and you’ve got a whole new game. There are scattered thunderstorms possible for Sunday, which could change the track Monday. Also, Friday’s track wasn’t as deep and watered as usual, which led to more choppy, harder-packed conditions than expected. Will the track need to be sealed for the rain? Will the rain pass and the track get ripped super deep? It seem much more different than it looks for RedBud 2. -Weigandt

Justin Barcia is absolutely hauling right now, and it sure is fun to watch. He came from way back for a moto podium at Loretta’s 1, he won a mud moto by nearly a minute at Loretta’s 2, he engaged Eli Tomac in an unreal fight for a moto win at Ironman, and came from a first-turn crash to sixth in RedBud’s first moto. He then welcomed Adam Cianciarulo to the 450 class via a crazy moto two battle, which left AC saying that dealing with Barcia is like dodging land mines. Yes, the aggression is there, and now Adam finally got to witness it firsthand. Barcia has now proven fast on all tracks and all conditions. Can he finally turn this speed surge into a win? –Weigandt