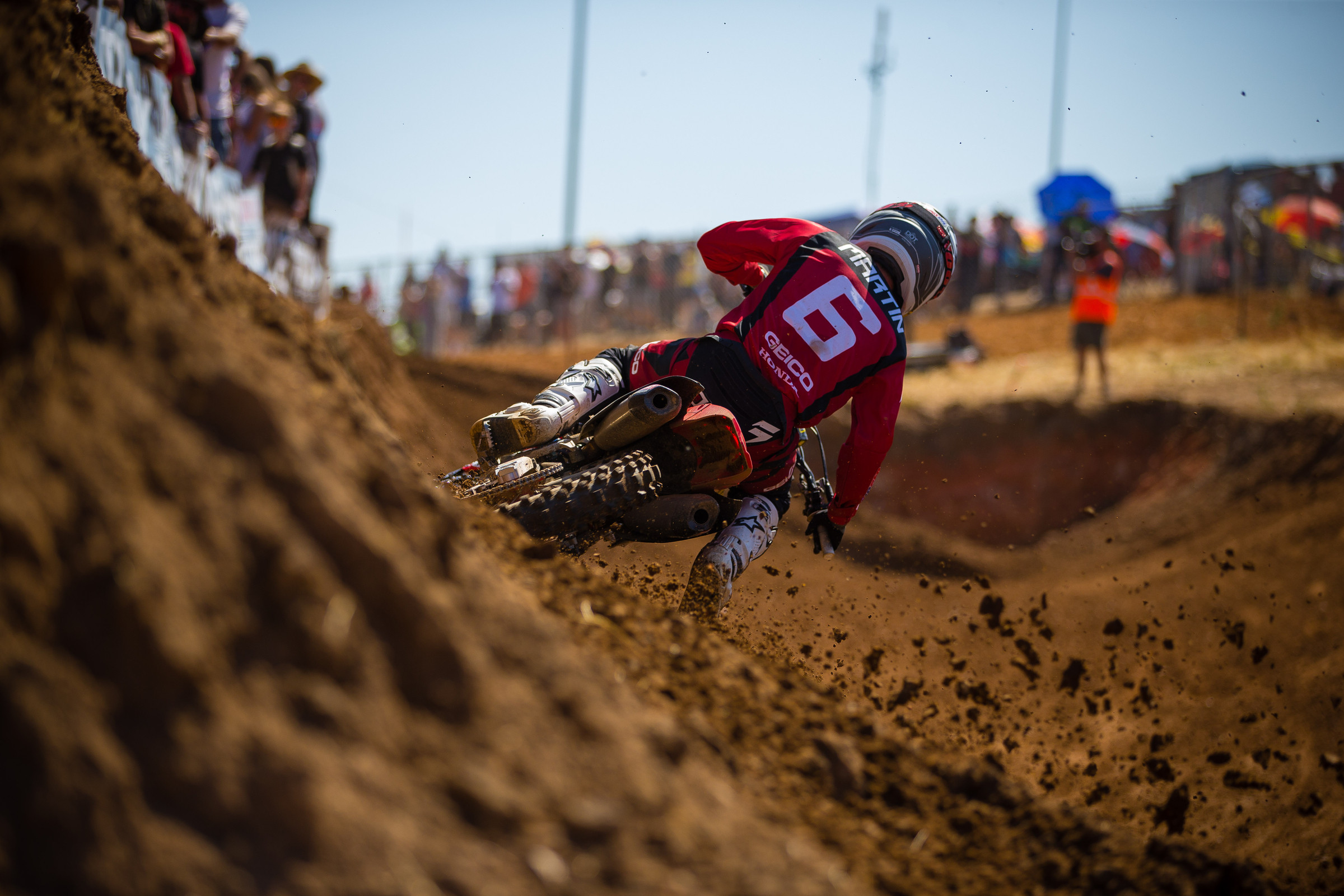 Jeremy Martin gets fired up. Then he pours gas on that fire, so he burns even more. Motivation is never the problem. He forged his pro rep with dominating runs in the 2014 Lucas Oil 250 Class Pro Motocross Championship, but even before that, he was known as a grinder back to his amateur days, when he once won two motos in the same day at Loretta’s on one of the hottest, most humid days on record at a race known for being hot and humid even on a good day. J-Mart fended off attacks from Marvin Musquin to win a second-straight Lucas Oil 250 Class Pro Motocross Championship in 2015. By then, he was well-known as one of the grittiest competitors, someone who prided himself on going from underdog to overachiever. Then, in 2016, the work went into overload. J-Mart ground himself down into Epstein-Barr. He kept racing and even won some motos, but he was finally forced to surrender his #1 plate.

He never quite gelled with the staff and some teammates at Monster Energy/Star Racing Yamaha—even when he was winning—and that gave him extra motivation to beat the rest of his teammates on the weekends. He was never into the team training thing, and often moved from one riding facility to another simply so he could ride alone. Later, he left Star and moved to GEICO Honda. His 2017 debut in red was okay, second in points to a super-strong Zach Osborne, but 2018, when Honda debuted a new chassis and engine for the CRF250R, Martin was fired up. He was ready to take the fight to Osborne, until Zach got hurt, leaving Jeremy squared in a title fight with one of his old Star teammates in Aaron Plessinger.

It ended in a hurry. Jeremy suffered a scary crash in the second moto of the Muddy Creek National, one so bad that thoughts of championships and race wins were no longer at the forefront. When the world saw Jeremy Martin laying on the side of the track, in pain, his legs not moving, all anyone could think of was, “Oh, please move those legs.”

He survived. He moved his legs and was taken to the hospital. Jeremy eventually determined he wanted to go racing again, and now he was possibly even more fired up. A year away from racing will do that. Plus, he will forever know that moments before that crash, he was back on top of his game.

The record might show Martin was second to Plessinger in points when he crashed, but Martin was en route to winning the High Point National the weekend before. Then his bike died while he was leading moto two. He handed over 25 points right there. He then won the first moto at Muddy Creek. If you’re Martin, who also won the Colorado National, you’re looking at Colorado, High Point, and Muddy Creek in 2018 as a coulda’ shoulda’ woulda’ three-race win streak, and a sure points lead.

Instead, he was in a hospital bed, career hanging in the balance. Jeremy Martin is good at finding fuel for the fire. In this case, it was obvious.

His return to racing in 2020 wasn’t quite storybook level. He was merely good but not great in Monster Energy AMA Supercross, going 3-4 in the first two 250SX East races, and then he went over the bars at round three in Atlanta decimating all title hopes.

About then, struggling with arm pump, he started looking at the 2020 season in a different way. Jeremy told us during the pandemic break in supercross that the Lucas Oil AMA Pro Motocross Championship, and winning a third title, had already become his primary focus. He raced two supercross races in Utah and then backed out, admitting he was saving his points eligibility to stay in the 250s for another year.

And then, he did his favorite thing: he went to work.

In 2018, when Martin was rolling outdoors on his CRF, he felt completely comfortable on the bike. By 2020, things had changed, including even the suspension components of that machine. The GEICO Honda team ran KYB suspension in 2018 but has since switched to Showa. Martin needed more time to get dialed, so the work began, as he headed all the way up to New England to work with Factory Connection at their New Hampshire HQ. While the supercross world was still racing in Utah, Martin showed up at Southwick to smash some laps. Then, he headed to his native Millville, Minnesota, and even raced local races there. During the off-season, Martin had been riding and training at Eli Tomac’s place in Colorado. More recently, he’s gone back to basics, back in Minnesota, with occasional visits from his brother Alex.

While he was working on suspension, his team has been working on engines. Last year the GEICO team struggled with all sorts of drama in the engine room, and by 2020 they have emerged not only with new engines, but quite a bit of new staff. Pre-season outdoor rumors have spoken to huge, huge gains in performance compared to last year.

That’s a lot of puzzle pieces falling into place. Still, titles and races aren’t won on pre-season feel and speculation. Talk will stop when the gate drops, and we’ll finally see if pre-injury 2018 Jeremy Martin is back. If so, he has every reason to believe in himself as the championship favorite, including those memories from right before his crash, when, in his mind, he was the championship favorite then, too.

Is he now? There are plenty of other 250 contenders, as always. Which Jeremy Martin will we see starting this weekend at Loretta’s? That could be the biggest question of all.

Listen to Daniel Blair's 250 Class preview episode of the Main Event Podcast, where he says he believes Martin will be back to his old form.