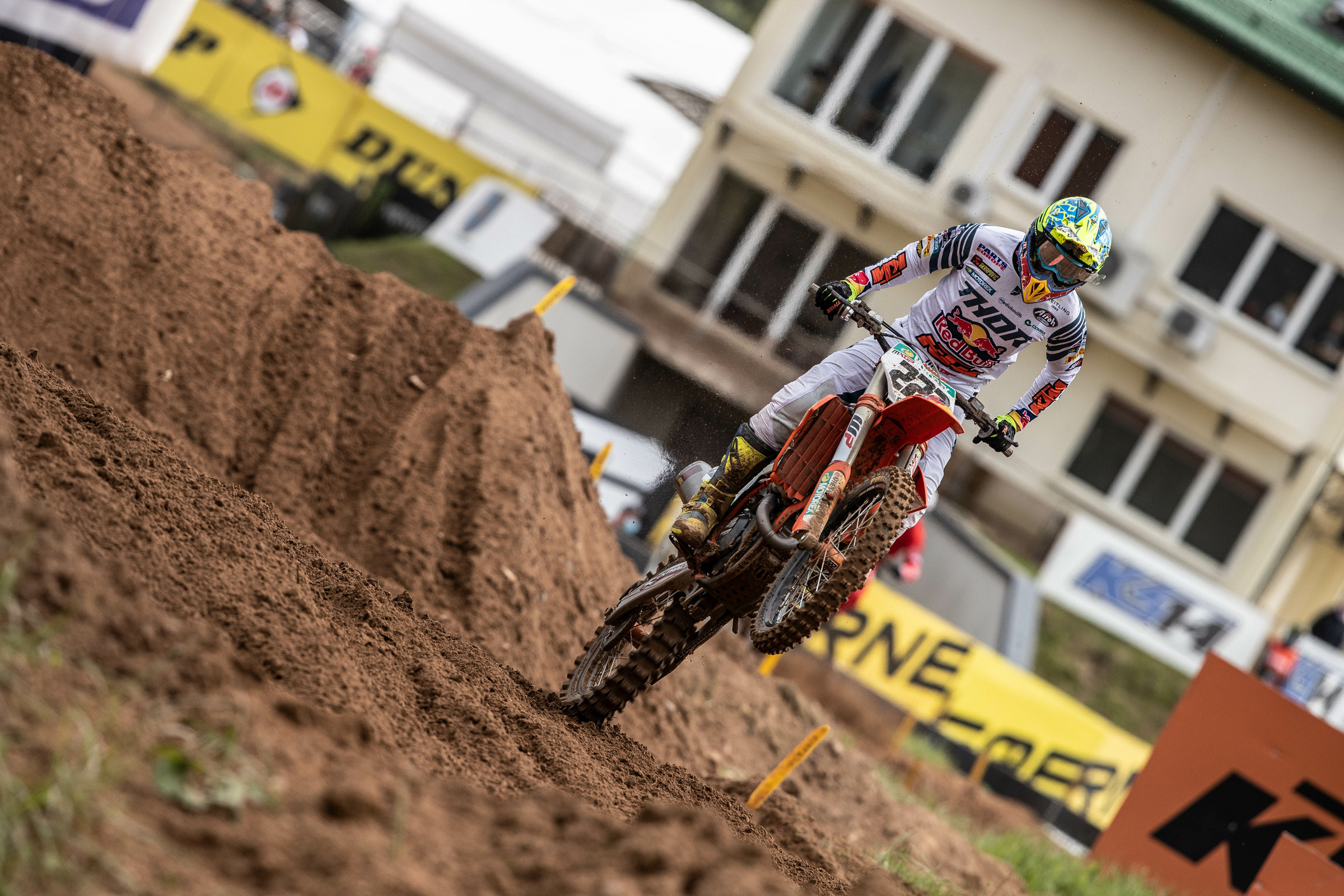 GP Report 4 Takeaways From the Second Latvia Round

No rest for the uninfected. The Grand Prix of Riga took place around a marginally altered Kegums circuit and in lower temperatures than the suffocating air that greeted the return to action last Sunday. Here’s what we saw and learned.

There was a bevy of action. World Champion Tim Gajser re-enacted a ‘Villopoto Loop’ but over a jump and wrecked his Honda in the first moto. Sunday’s winner, Glenn Coldenhoff, did not have so much ‘Gas Gas’ in the second race after a crash left the Dutchman with a sore back and a DNF. Jorge Prado’s first moto holeshot was scrubbed out by broken wheel spokes. Gajser punted podium threat Romain Febvre into the ground and Arnaud Tonus was once more fast but rusty.

Somewhere among the errors, there was a strand of normality. In the second race, Jeffrey Herlings appeared at the front, after finally acquiring a decent start, and set the pace through the sandy bumps. His Red Bull KTM teammate Tony Cairoli was one of a leading quartet that also involved the startling Rockstar Energy Ice Husqvarna’s Arminas Jasikonis—whose all-action style translated into immensely effective bike behaviour and speed as the Lithuanian was cheered on by a large pocket of the 2,000-odd crowd (part of the limit of 3,000 in total permitted into the circuit)—and the ever-robust and lively Monster Energy Yamaha rider Jeremy Seewer.

With two laps remaining an odd thing happened. Herlings, comfortable and unpressurised, (even if Jasikonis was nearby and poised for the slightest slip) lost focus and crashed through the waves. He was on his way to a 3-1 finish and the chance of a third win from four this season before the glitch. Herlings was able to salvage a 3-3 to at least make the podium but not before he quickly lifted the KTM and forced Cairoli onto the brakes and offline and also put the Sicilian on the deck. Jasikonis accepted the invitation and Seewer rallied on the last lap to try and grasp his first 450 overall but the Husqvarna man became one of just three riders since 2016 to win a second moto and miss out on the rostrum (credit to journo David Bulmer for the stat) as his eighth place for the first outing became a lead-weight.

Cairoli steadied his dodgy right knee, remounted and rode to fourth. Coupled with his superlative first race success the score meant he nudged into the 90s for total victories and a career streak that involves a GP winner’s trophy every year yawning back to 2004. The soon-to-be 35-year-old explained that before race day he had spent time in a Latvian hospital having fluid drained from the right knee which had been hit in a first-corner incident on Sunday and also having anti-inflammatory treatment. Post-race there was also a knowing look of contentment; that he had again proved his worth and competitiveness and justified KTM’s investment for 2021 in keeping him alongside Herlings and Prado on long-term lucrative deals. It was his first garland since May 2019 in Mantova, Italy…and with that same track still to come on the apprehensive calendar.

While his rivals recovered from Sunday’s exertions or practiced their starts Herlings had been out at a nearby practice track on Tuesday to pound more laps and unlock the frustration that kept him away from the prizes at the weekend. The Riga GP was much better, even if he did appear more bemused than annoyed with the shock late development. “It’s a mistake and weird,” he said, “because I never normally do something like that with two laps to go. It was tough to throw away the GP.”

The consolation was an MXGP points lead that pulled to 28 courtesy of Gajser’s first moto mistake and a poor launch in the second that invited the clash with an aggrieved Febvre, who would have been in podium contention for the second GP in a row given his strong denial of Herlings in the first race for the second spot.

A word for Jeremy Seewer: the chief threat for Yamaha among what seems like a sea of blue bikes in the class. The Swiss was again one of the more proactive riders in cutting his way through. Tough, rarely mis-stepping and utterly dependable, the second-place finisher overall came closer than ever to that elusive maiden MXGP success.

“In one way I’m happy that I’ve finished strong and had some battles with top guys and recovered from those starts,” he modestly admitted. “On the other hand, I was quite close to winning that second moto, and even the GP. The track was rough, and it was easy to make mistakes. We have a few little things to work on and then I’ll be ready for the next one. Most of the top guys are here now, okay they are struggling with some injuries but last year some big names were not here or fully fit [so] I’m definitely feeling good about being on the box.”

2. MXGP Starts to Stretch Its Legs (But For How Long?)

Some of the caginess and caution evident in the return to racing the previous Sunday started to evaporate on the second assault of Riga. The result was a spate of more crashes, and risk-taking as the speed and intensity climbed. The tight, right-hand first turn continued to claim victims with each start and that spawned panic and desperation with lap-times bunched closely together.

MX2 pre-season title favourite Thomas Kjer Olsen effectively rubbed away his last chance of the crown after a first-lap second moto crash that left the Dane with a sore neck and head. He was already nursing a cracked shoulder blade which made his fifth place in the first moto all the more heroic. His subsequent DNF leaves him ninth in the standings and almost 100 points behind Red Bull KTM’s Tom Vialle.

Vialle’s teammate Rene Hofer left the track in an ambulance. The Austrian rookie crashed in the same section as Gajser and suffered a broken left shoulder. There were other bumps and victims and not all physical. Thomas Covington—still racing his way back into shape after his energy-sapping illness—saw his Gebben Yamaha shock explode to make the YZ450F a ‘low ride’ in the second MXGP moto. Another victim was SS24 KTM’s Shaun Simpson who was absent due to a bang to the back and neck in the previous Grand Prix that forced the Scot to withdraw from the rest of the Latvian dates.

Riders might already be trying to endure, but it feels like the series’ prospects are as precarious as their chances of 100 percent health with rumours swirling about the rest of the calendar and the rising threat of more COVID-19 restrictions.

“Normally with 20 GPs you can look and plan and know that if you lose a couple of points one weekend that you’ll soon be able to make them up; that doesn’t seem to be the case now,” said Seewer again.

“Every point is precious because we don’t know if or when the whole thing might stop again,” admitted Herlings.

Geerts, Vialle. Vialle, Geerts. So far, so twosome. The Frenchman (Vialle) and Belgian (Geerts) have shared MX2 honours to-date and the Monster Energy Yamaha rider actually became the first in either class to go 1-1 this season. Geerts despatched Vialle in both races as his rival dealt with a slower race rhythm and pointed towards an ‘off’ suspension setting. Geerts remained adrift of the squabbles behind and his proficiency pushed the gap down to just eight points in the standings.

Aside from the blossoming dispute for the red plate the other outstanding sight from the category was the speed of the F&H Kawasaki riders. Starts, pace, precision, and no shortage of steel: the efforts of 2019 EMX250 European Champion Roan Van De Moosdijk (fast becoming Herlings’ heir apparent for the Dutch) and 2018 EMX250 title holder Mathys Boisrame were rewarded with their second podium appearance together in a row. At one stage the teammates were at full flow and in frighteningly close proximity to each other: “I could see the green fender a few times,” smiled Van de Moosdijk, but the Dutch prodigy held strong to be runner-up.

After his fine work with Pauls Jonass to win the 2017 MX2 FIM Motocross World Championship, the mark of former GP winner-turned-trainer Marc De Reuver is all over the fitness and capabilities of the F&H trio (Mikkel Haarup was seventh overall). “Still not good enough” was his half-joking assessment after the Riga GP motos. Very much work in progress though.

A patient, if somewhat restless, paddock now get to down-tools for two days until building-up to the Latvian finale. The ‘Grand Prix of Kegums’ will bring the FIM Motocross World Championship up to five rounds of the original 20. Another 11 remain on the current schedule although a verdict on the Grand Prix of Turkey and the possibility of the series being able to travel through several country borders to reach Afyonkarahisar will apparently be made before Kegums empties this weekend.

The venue in Afyon could take MXGP into the first of four hard-pack courses on the optimistic slate. The others being Faenza and Arco di Trento in Italy (although the latter’s date at the beginning of November is wishful thinking when it comes to the approaching winter climate). There is also the new circuit in Madrid, Spain; which is still one of Europe’s hotspots for COVID-19. So far MXGP has managed to turn wheels and bring an international collective to one circuit for a draining triple-header. Thoughts were already drifting to post-Latvia and the hope that the championship can somehow, somewhere reach a significant number of motos.