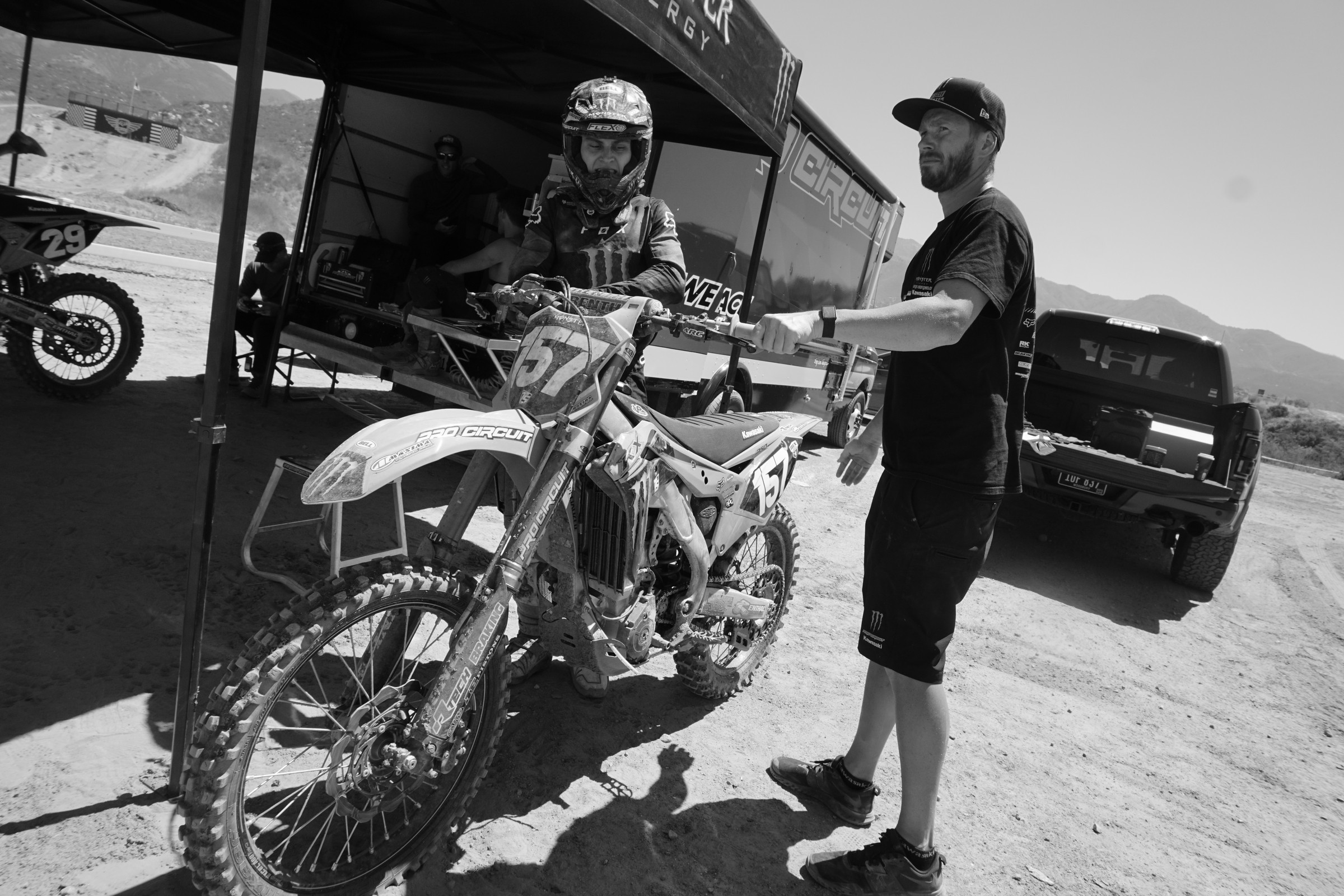 On what was an almost impossibly bright and blinding Tuesday morning and with the sound of motocross bikes of all shapes, sizes, displacements, and configurations making the entire scene pulse and reverberate, a shirtless Darian Sanayei sat in a black director’s chair and quietly watched on as Monster Energy/Pro Circuit Kawasaki mechanic Oliver Stone methodically went over the #157 Kawasaki KX250. The startup of the 2020 Lucas Oil AMA Pro Motocross Championship was a mere few weekdays away and Darian Sanayei, keeping a close eye on everything before him out at Fox Raceway at Pala in smoldering hot and dusty Pala, California, had gotten his big break. This forthcoming Saturday afternoon over in faraway Hurricane Mills, Tennessee, Sanayei, a refugee from the FIM Motocross World Championship, will take his place behind the starting gate as a member of Mitch Payton’s omnipotent quarter-liter outfit.

“It’s awesome,” nodded Sanayei. “This is what I wanted to do. When I came back to America from the World Championship at the end of last year, this is what I wanted. I wanted to do decent enough over here to try and get into a fill-in team and to get a ride. Now I did it. You know, my dad even said to me, ‘You got handed a miracle here.’ I worked for it. A bunch of people tested the bike and I was the person who ended up getting it, so it was awesome and now I’m real thankful for the opportunity and now I want to just try to do the best that I can.”

Certainly quite a turn from the late season 2019 MXGP of Turkey, where Sanayei participated and then wondered what would be next for him and his racing career as his age, 23, and a lack of sustainable factory support, would see him packing up and heading off elsewhere to look for employment in 2020.

“Everything was completely up in the air,” explained the Washington State native. “I had no clue what I was doing. At the time, I had another year on my contract to race the GPs in the 450 class. However, it ended up where Steve Dixon couldn’t get the sponsorship for it, so he really couldn’t do it. At that point I just decided that I was going to come back home to the U.S.”

Seemingly content and performing well while racing over in Europe on the Grand Prix circuit in recent years, it ultimately all became to be too much for Sanayei, who made the collective decision to leave the MXGP traveling circus.

“Well, it’s nice to have security when you have a deal,” offered Sanayei. “With how it went in supercross for me this past winter, I probably would have chosen to keep that contract and race MXGP in Europe this year, but it didn’t really fall together that way. I was kind of a little bit bummed, but I was also excited because eventually I wanted to be racing here in America. It’s hard for an American over there. The money, the team, everything. It is not an easy deal. It is definitely not the easiest thing to go over there—especially if you don’t have full-on team support where everybody is holding your hand to do it. I did it. It wasn’t terrible. I actually enjoyed it at times and it was cool to do something different. It’s a little bit more of a struggle trying to live over there when you’re not from there. You’re not used to what they do.

“A couple of the teams over there have a really good program where they hire you and just put you into the system and it all works out pretty good,” continued Sanayei, citing the factory team haves and small private team and privateer have-nots of MXGP. “Everybody over there had a pretty warm welcome for me; everybody was nice for the most part. The European and American racing mindsets are just different. How they would approach something with their mindset is completely different than I would. I’m not saying one way is right or wrong, They’re both fine. It’s just different.”

So, Sanayei did make it back to California, but that was the easy part. What was difficult was piecing together a racing program.

“It's tough in your head when you think, ‘Yeah, I’ll put something together. I’ll have a couple of sponsors that back me and I’ll do this and do that.’ However, actually doing it and trying to train and race and work on your bikes and do everything in the meantime, it’s definitely a little bit harder than it looks. For me, if I wanted to be racing, I had to find anything that I could. I was thankful enough to get on the Babbitt’s Online Monster Energy Kawasaki team for arenacross and supercross. Monster Energy was also helping me and without all of them, I definitely would not have been able to keep racing. Now I’ve got an opportunity, so now I just have to make something out of it.”

“Mitch has been in the sport a long time, so I’ve been calling him and begging him and asking him for stuff and trying to talk to him for seven years. When he saw me, you can tell he might not be in the mood for it, so he would turn around and start going the other way. But, yeah, I’m just thankful for him to give me this opportunity. I think Mitch is pretty old school. He wants to see hard work and he wants to see his riders wanting it and he cares about results. If I can do that for him, I think he’ll be happy. He was definitely keeping an eye in me before I got all this. When I was talking to him about the deal, I think he kept an eye on all the things that I did bad. He mentioned all those things to me. Which were true. He was just worried a little bit about my fitness and me having Epstein-Barr before. In supercross, I was getting a little bit tired in the races and my technique wasn’t super good in supercross. He sees it all, though, and he gave me this shot. We’ll see what happens on Saturday. I’ve never really raced with everybody here, so I don’t know exactly where I’m going to stack up, but I know that I’m not too far off the pace. I know that there are a lot of fast guys and a lot of us are pretty close. I think there are 19 factory dudes in the 250 class. You’ve got those few guys that are a little but faster and they have a little bit more speed than everyone else, but basically from that fifth to 15th, 16th, 17th, everyone is pretty close. I think it is going to be making sure that you’re focused on what you’re doing and pushing hard the whole time and starting up front.”

“This bike,” said a smiling Sanayei while casting a glance over at his #157 KX250. “It’s definitely the best bike that I’ve ever rode. All around, it’s just better. The chassis is the best that I have ridden, the engine is the best I’ve ridden, it’s pretty sick. I’m stoked on it. No more excuses now with this bike. Dude, I’m just super-excited. I’m not paying too much attention to all the glamor and all that. I want to focus just I’ve got to do. I’m just going to try my best to try to do well. I think, realistically, I can be in that top five to ten spot. If I start out front, and maybe if I’m feeling good and I learn that speed from the really fast guys, I want to try and stay up front. I think it’s reasonable to start up front and finish in the top five. We’ll see. You just have to fight the entire time.”

Sanayei has taken a long path back to his country, and now finally has the ride he’s always wanted. Next stop: the Loretta Lynn Ranch.