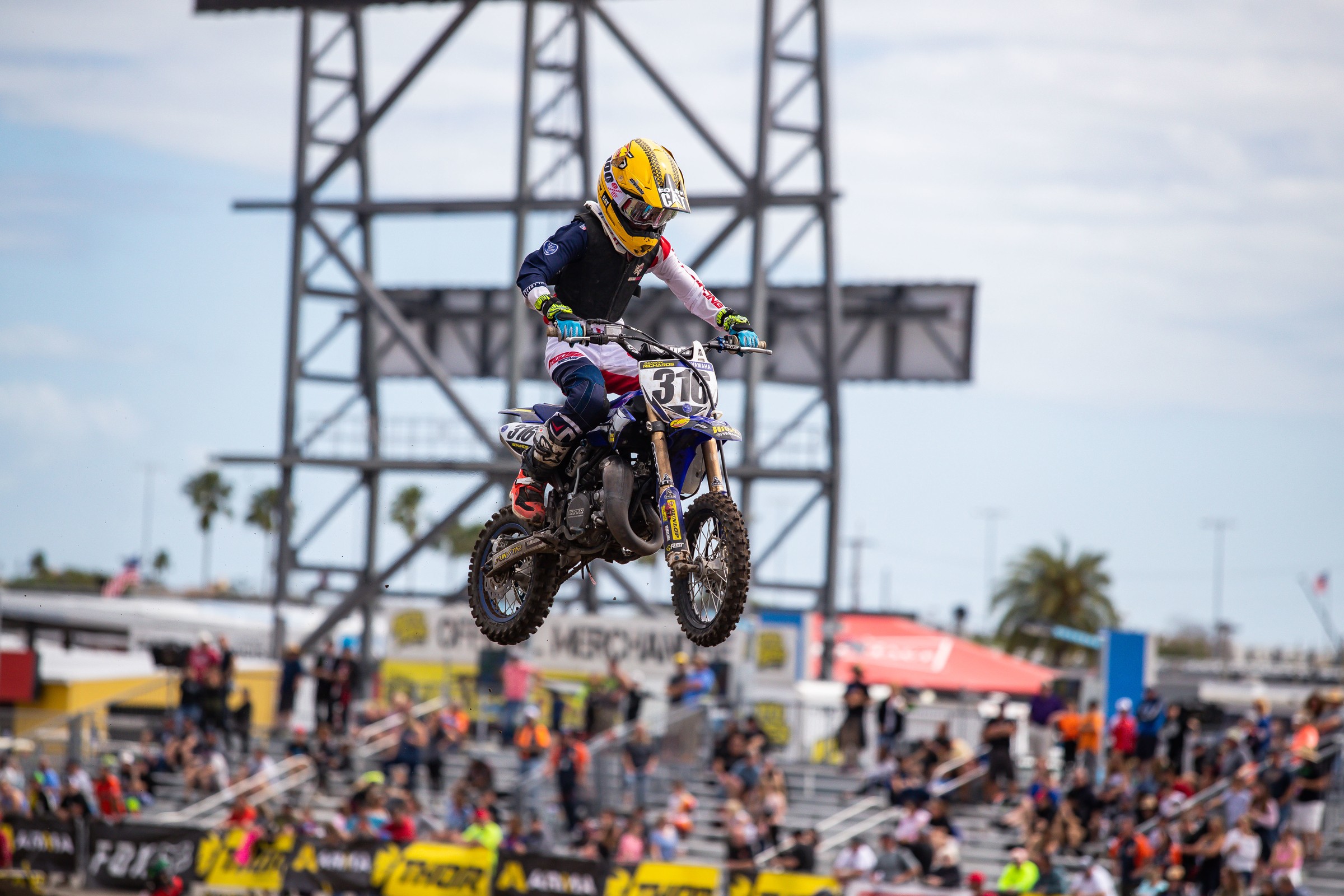 This week, we talk with Blu Cru’s Canyon Richards.

???? #twostroke #wideopen Couple clips from the weekend. Rained the night before.

Racer X: What’s been going on the last couple months? What have you been up to with no racing?
Canyon Richards: Just riding with my friends and having fun. At night we have pit bike races and just riding supercross, our turn track and our outdoor track and stuff. We have my friends come down and we usually will start riding 9:00 to 1:00. We usually cut new turn tracks in-between our supercross track and add supercross rhythms in it. Then we ride pit bikes a lot after we’re done training. We usually have a pit bike race on the weekends.

What was the last race that you did this year before the quarantine? And how did you do?
Spring a Ding [Ding]. I did good. I couldn’t really get a start because my gearing was a little off. So we changed my gearing. I won that rainy moto, which was the last moto. I won a championship there.

Did you do any Supercross Futures?
Yeah, I did two. St. Louis and Arlington. I got two seconds in St. Louis and won both heats and mains in Texas.

What would have been before that, Mini Os?
Yeah. We raced Mini Os. I was battling for first and I was just trying to make some clean passes because the kid was a little squirrelly. So I made a clean pass, then he must have got whiskey-throttle or something then T-boned me in the next turn. So we both went down. I think I got top five or something in that one. Then we went to the outdoors and I won a championship in the last turn. I passed the kid on the last turn and won that championship in outdoors.

Are you on a 65 or do you ride a 85 a little bit?
I’ve been training on the 65 for the regionals, but before that I’ve been training on the 85 a little. I will probably move up to the 85 after Loretta’s. I want to win on the 65 before I move up to the 85. I started mountain biking to get stronger going through the braking bumps and the long motos.

When did you get your first motorcycle?
I think I was three when I started riding. I was two when I got a quad and I rode that for a year. Then when I turned three I got a CRF50. Then I started racing that when I was four.

What made you want to start racing dirt bikes?
I just started liking it. I always liked to go fast. I feel like it was just something that was just in me, that I just wanted to do. My first year going to Loretta’s I won my regional, then I broke my foot when I hit a fence so I didn’t do so good at the national. Then the next year I won every moto on the PW and the championship. I got on the podium and started thanking weird sponsors. I even made one up. It was like, Tire Lube. It was just hilarious because I really just saw the other people on the interviews and just started doing it like them, even if they weren’t my sponsors or even a real company.

I saw that Travis Pastrana and J-Law have come up and ride with you?
Yeah. Jason started coming over, he grew up just down the street. He has really good technique. I’ve learned a few things off him. He always keeps his leg real high. He likes to cut down on berms and run different lines that people most likely wouldn’t think of. Then we had a little pit bike race on the pit bike track and I built with the skid steer and I took him out. It was pretty funny. Travis came out the year he rode MXoN and he rode both bikes. There’s this one huge sand sweeper that we have and it gets like five-foot tall rollers in one day. He hit that thing. It’s a downhill and it goes back uphill, and he hit that thing wide open. He was pulling roll-offs while hitting the rollers going through the turn. I went to his house after that and tried to backflip too. I kept bailing once I’d get upside-down. I kept thinking that I’d hit my head on the ramp. I wasn’t even close. I was just scared. At our property we have a 120-foot tabletop. It was pouring rain and I was on the 65 and I kept hitting it. I hit it before him, and then I pulled him over. I said, “I want to hit the 120 behind you.” He’s like, “No, I don’t want to get landed on.” So then he followed me off of it and he actually almost landed on me because he hit it so much faster than me.

@letjlawride is always pushing me to be a smarter rider... and sticking his fender on my seat ???? #Repost @letjlawride ・・・ Canyon Richards is one of the nicest kids I’ve met. But canyon Richards with a helmet on is not looking to be your friend. Hit the brakes or hit the tree. I choose wisely. #roadtolorettas2020 #thefarm

The day we saw how far a #yz65 could jump. There is a savage effect that @travispastrana brings out in others. It’s scary and exhilarating at the same time. Still can’t believe this happened. ???? @t.white #tbt

What are some guys that you look up to for riding style in the pros or that you like to watch?
I really like to watch Ryan Villopoto. He’s my favorite rider. He’s really fast. He hits his lines all the time. I like [James] Stewart a lot. When I won at Freestone, we went to his house and I was on the Cobra Juniors. We had the frame powder coated with Warsaw gold and everything and we had a replica. My dad forgot to put antifreeze in the thing, so I got out there and only did half a lap before the thing blew up because my dad never put antifreeze in it. Everyone was making fun of my dad.

Does your sister ride too?
Yeah. She’s getting really fast. She’s starting to jump a lot now. She’s two years older than me, so 14. We ride together a lot.

Who’s faster?
I’ve been stuffing her a while, just going straight in and block passing her and stuff. Now she’s realizing that it doesn’t hurt too much and now she’ll be on the outside of me and she’ll come straight over and take me out. So when we were riding, she didn’t like me beating her. She cut the track and went around one of the jumps and came straight in and just hit me. Took me right out on a straightaway. Just pulled right over next to me and just slammed me.

Obviously, you’ve ridden motocross and supercross. Which one do you prefer?
I really like supercross. When I was little on juniors and seniors, before we had our place, we would be in our friend’s backyard just riding and stuff and then my dad bought a dozer. He had a little spot at his friend’s house that we could build tracks. He grew up riding BMX bikes, so all of his BMX jumps were always straight up and down. So he used to build straight up and down jumps. So I’m used to supercross. That was all I rode until we got our place and my dad learned how to build an outdoor track. He’s good at building a supercross track, building different sections and stuff. Every few months we like to tear down a section on our supercross track and rebuild it.

What is your dream professional team that you would want to be on?
Star Racing, the factory Yamaha team. I really like watching Dylan Ferrandis. I like how he stuffs people and [Justin] Barcia too. They’re not scared to go and stuff people on supercross. That’s how I like to ride.