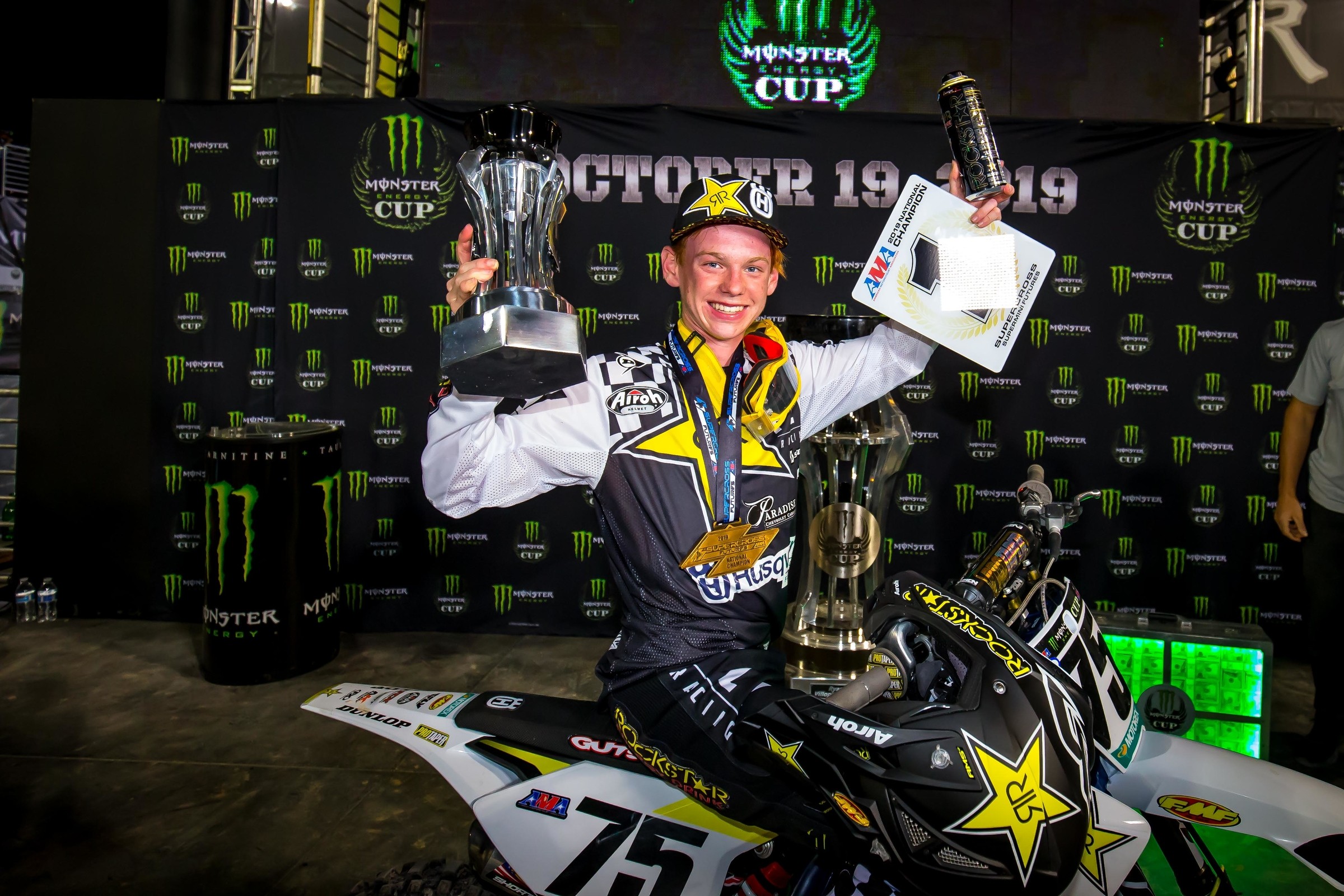 This week, we talk with Rockstar Energy Husqvarna’s Evan Ferry.

Racer X: What are you up to?
Evan Ferry: Just got done with some school at On Track. Eating some food. About to go water the track, just water this little turn track that I have made.

How’s quarantine life been for you?
Quarantine, honestly I don’t think I’ve ever been more busy than I am now. Honestly I think the whole quarantined thing has actually helped me. Kind of just buckling down, riding, training, training off the bike, mountain bike, training in the gym. Luckily I got this track at my house and the 83 Compound, maybe ten minutes from my house. We got those two tracks. We have a buddy of mine’s track that we go to. Honestly we’re just working harder probably than ever now. Now that we know that we’re going to regionals and we’ve gone back to riding four days a week… We cut it down at one point to three. I think one week it was even two just because we didn’t know what we were going to really do yet. But for sure working hard and trying to get stronger and get better on the bike. Definitely riding the 125 I think will help strength-wise and maybe just maturity-wise, riding. Maybe help my technique a little bit. Riding the Supermini, I kind of started riding a little crouched. I’m getting a little bit big on the bike, so I’m having to kind of change my riding technique a little bit to ride it. Definitely sitting up more in the corners and just the way my elbows are. I feel real crouched on it. I almost feel like a whole different rider on the 125. So hopefully right after Loretta’s we can kind of get that rolling.

What’s your plan after Loretta’s?
I recently just got a 125. I’ve been riding that for a week and a half now. I know the team wants me to qualify in both classes, in the 125 and Supermini. So if it gets close to Loretta’s and I hit a growth spurt or I gain a lot of weight and just can’t really ride the Supermini anymore, then I’ll just race the 125. But the plan is to race the Supermini at Loretta’s, but then after that I’m done with it.

When will you ride a 250? Maybe the following year?
I’m thinking maybe after Mini Os. Kind of judging off of the way I’m riding the 125 now, I don’t think it’ll be long until I do start riding a 250. Probably won’t be that long.

Talk about what you had done so far in 2020, what races you did. I know you did some Supercross Futures in St. Louis and Tampa, and you guys went to Texas for Spring Nationals as well. How did it go?
We went to the Supercross Futures. I think the first race this year was Supercross Futures in St. Louis. I won both classes there and then went to Tampa. First main event at Tampa, I ended up falling in the second corner. I think I came all the way back up to third from dead, dead last. The next moto I went out and won the second moto. Then went to Spring a Ding Ding in Texas and won my first moto. Then honestly just couldn't get off the ground the next three. So I definitely was looking forward to maybe bouncing back and getting some titles at Freestone. Felt really good in practice. I actually got one practice in and felt good. Then like five minutes after I got off the track they were like, we’re canceling it, sorry. We need to get out of here as soon as possible. It sucked, but we understand. There’s legal issues and you didn’t want people going to the hospital. That’s it, actually. That was the last race. Kind of depends on where the super regionals are going to be for Loretta’s. That will probably be my next race is regionals.

What are some of your goals for Loretta’s? Obviously you talked about maybe not racing a Supermini, but what are your goals and expectations for Supermini and 125?
Honestly it just depends on what I ride. Trying to win the Supermini and even in the 125 class too. We actually raced, like in Schoolboy 1 you can race a Supermini. That’s kind of like a 125 class. When I ride the Supermini in that class, I’m only one, maybe two seconds off of the fastest guys in the 125 class on my Supermini. Recently hopping on the 125 I’m maybe three to four seconds a lap faster on the 125 than I am on my Supermini. So honestly it just depends. I don’t really know how everything is going to go, but I don’t care what bike I’m going to race. I’m going to put there and put in the work. I’m going to go there and show the dudes what I got.

Talk a little bit about how your deal with Rockstar Husky came together last year right before Vegas.
Right after Loretta’s, I didn’t have a good Loretta’s last year. I had some problems there. Honestly it was kind of crazy. Maybe a couple weeks after the race, we got a text from Scuba [Steve Westfall]. We’ve always been tight with the Husky guys just because of Jalek [Swoll], and Jalek trains with my dad. So we got the text from him. He’s like, “Hey, we want you on the team.” That was honestly a big dream come true for me. Then I went out two or three days before Monster Cup on a completely different, faster, different handling bike and went out to Monster Cup and pulled the holeshot in the first moto. I won the first moto. Came out about third in the first moto and by the second straightaway got into the lead and just kind of rode my own race. Honestly it’s still nuts to think. That was probably the best two weeks of my life, really.

I think it probably helped your confidence from having the commitment of their support probably changed a lot for your racing.
For sure. I think it’s the support and when you have the support, the confidence, it all kind of comes together. It all adds up. Also too, the bike, the differences in the bike for sure help. Honestly just the team is awesome. It’s definitely a dream come true. It definitely confidence-wide helps a lot.

It’s probably easier knowing that if something happens…
You got the team behind you.

Exactly. Talk a little bit about the activities Husqvarna has been encouraging you guys to do during this quarantine.
I think honestly it’s really fun. We had the #PayItForward. I went out and gave some Rockstars and some pizza to some essential workers. I made a little care package for one of the UPS guys that always comes to our house. The whole coronavirus thing is no joke. For sure, definitely the activities, it gives a very big perspective on how grateful we really need to be for the normal things in life, like going to the grocery store or going out to eat, just little things like that. It really shows that you got to be grateful and never take that stuff for granted.

Today we as a team went about paying it forward to people who are keeping All of us safe and rolling. Our delivery drivers from UPS and Fed Ex got a care package equipped with @flyracingusa gloves and @rockstarenergy then I tried to support local businesses like @als.famous.pizza by brining @pascocountyfirerescue some pizza and rockstars. Keep being awesome we appreciate you. #supportlocal#hqvpayingitforward @husqvarnamotorcyclesusa

I was talking to your mom yesterday and I said, it’s nice that everyone kind of gets to slow down for a bit. Because in racing,  it’s fast-paced all the time.
Yeah. I think we all get it… We want to go back racing now.

[Laughs] I agree. Obviously you’ve been training with your dad since you started riding, who are some of the guys you have been able to be around in that time?
Yeah, definitely some really good, fast guys, like Ken Roczen or Adam Cianciarulo, and Alex Martin. I used to get to watch them a lot last year. Definitely just sitting there watching, seeing what they’re doing. My dad trained Trey Canard for ten or eleven years. Always liked watching him. Really smooth rider. I think the biggest influence out of everybody is probably Jalek. Just always been around him. For sure, he’s unbelievable on the sand track out in my front yard. It’s nuts how fast he can go when he’s on it.

What is the best piece of advice your dad has given you?
Just like I say in all the press conferences is “elbows up.” The only reason I say that though is because when you put your elbows up, that’s going to help you regrip. If your elbows are up, it’s automatically throwing you a little bit over the front of the bike and then that’s going to make the bike turn better. There’s so many things that just putting your elbows up really does.