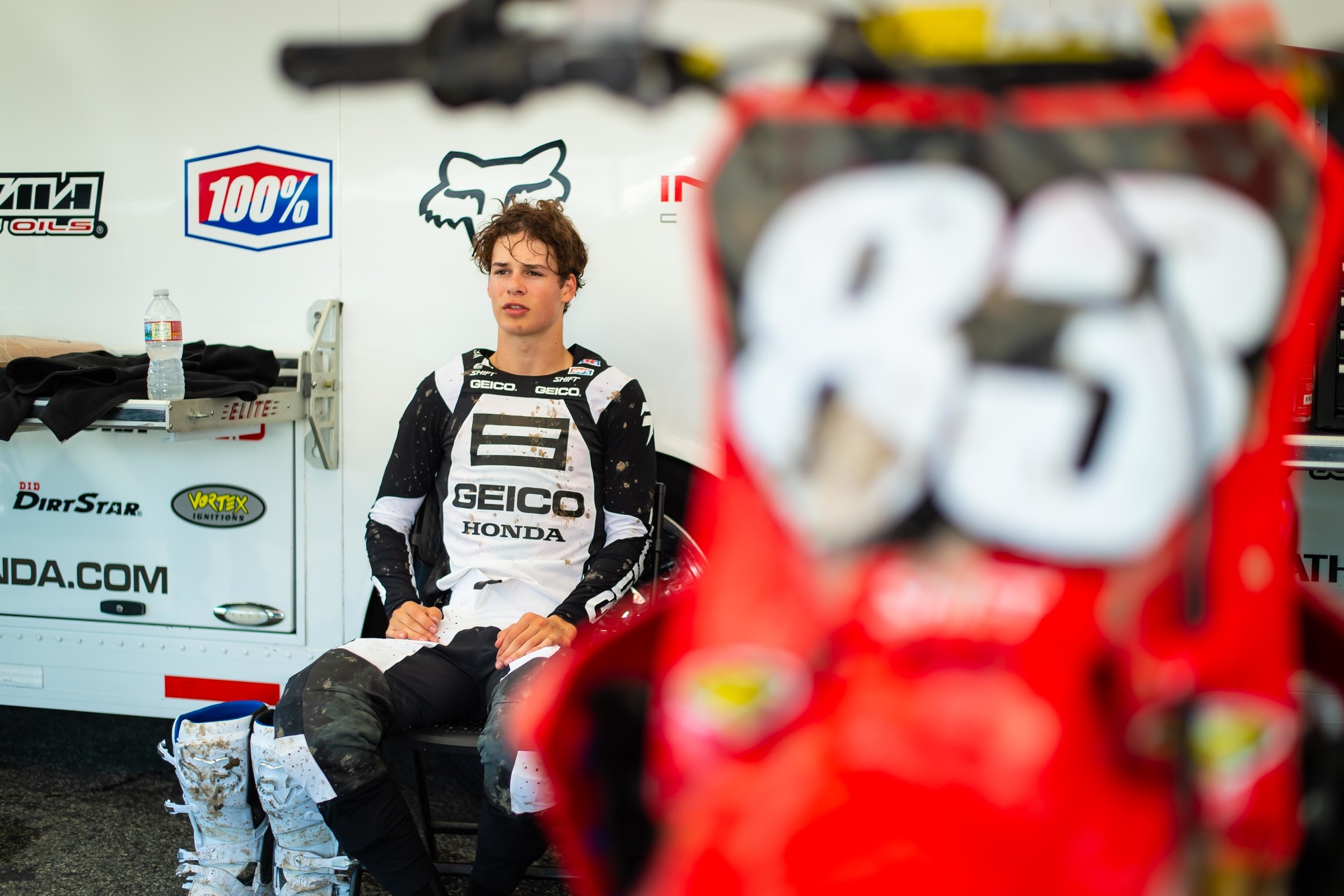 “For the rookies, I feel like we’re a little bit lucky,” says GEICO Honda’s Jo Shimoda of the racing shutdown due to the pandemic. “There’s a chance to prepare that we wouldn’t have had. I feel a little bit bummed, but not too bad about it.”

It’s rare—as in never happened before and hopefully never happens again rare—for racing to take a nearly three-month break at mid-season, but here we are. The break could lead to anxiety for title contenders like Eli Tomac and Ken Roczen, but was really an opportunity for first-year supercross pros to hone their craft, learn from mistakes and make gains.

Jett Lawrence was a sensation in the early rounds of 250SX West, famously leading nearly all of his third career supercross race, Anaheim 2, before getting passed on the last lap by Dylan Ferrandis, and then crashing out. The break gave him time to heal a broken collarbone, and then get back to work under the watch of 1984 Supercross Champion Jonny O’Mara. Can the 16-year-old Lawrence make big gains quickly? You’d better believe it.

“Um, yeah, I’d say so. Hopefully!,” he says with hesitation, but then lays out a solid case. “I can’t really say much because I’m the one riding and I don’t notice a big difference. Lap times? Yeah. Consistency? That’s better. Whoops? I’ve got them a lot smoother now, I’m not missing any whoops with the front wheel. I’m a lot more skilled in those so I haven’t had any endos lately, so that’s good. I feel like I made another step in speed. A few months ago I feel like I got back up to where I was at A2, and then after that I made another step in speed. I feel like I’m more…wiser? Is that a word? I’ve learned from my mistake in A2 and other stuff. Knowing when to be patient and knowing when to go fast.”

You can watch the archive of our Instagram Live video from Monday with the rookies below:

Weege talks with @Js352, @DerekDrake_, @Jettson83 and @JoShimoda84 about their seasons so far and returning to racing this weekend ???? #Supercross #SLC #Weekend #Rookie

Considering where he was before he crashed at Anaheim, Jettson could be considered a title spoiler. He could get in the podium or win mix and take points away from the 250SX West contenders of Ferrandis, Justin Cooper, and Austin Forkner.

Other rookies haven’t shown their best stuff. Rockstar Energy Husqvarna’s Jalek Swoll has been super consistent with three-straight ninth place finishes. No one has noticed that, though, because Swoll’s season has been overshadowed by a DNQ in his debut at the Tampa 250SX East opener.

I asked Swoll what part of the transition has been harder: is it learning supercross tracks and obstacles, or dealing with the pressure, nerves, and schedule of race day?

“It’s way harder to race—everything is so different,” says Swoll. “Qualifying is my biggest thing right now. I’ll qualify 20th and then get [finish] top ten when I’m not even riding my best, you know? It hurts me a lot because the gate picks are so crucial in supercross. But I think it will come naturally with just being at the races more and being around everyone more. That stuff affects me more than the nerves with the fans and those things.

“After missing that main, I’ve gotten ninth, ninth, ninth, and those were races where I was still building. When I made my first main, I was still nervous.  I feel much more relaxed and ready to go. I’m not nervous about lining up with those guys, and I’m ready to see how much I’ve gained during this break. I feel good right now.”

Drake has also been consistent, with 8-7-9 finishes in his last three races in 250SX West.

“They were good, but it’s still so gnarly compared to amateur ranks,” says Drake. “Way different. You’re fighting for your life out there. It’s sink or swim, and I realized that. Now I have to put that to use.”

Drake also feels like adapting to racing has been tougher than learning supercross tracks and obstacles.

“I’ve ridden supercross tracks when I was an amateur, Monster Cup, and just playing around and all that,” says the Californian. “But when it comes race day, qualifying, under the lights, hay bales, 20 other people, it’s just hectic. I basically just measure it by how I feel on the bike. My results haven’t shown yet. Even during qualifying I feel good, I just need to get a start in the main and prove myself.”

Quietly, GEICO Honda’s Shimoda has ridden very well, with 10-10-5-7 scores in his four 250SX East starts. However, he’s made some changes and thinks he’ll be better starting this Sunday.

“I actually changed my trainer, quite a bit different. I was working with Jeff Ward, just switching things up, I’m with Jay Whipple now,” says Shimoda.

“I was pretty happy [with the first four races], I didn’t really feel like sketchy or nervous. My plan was to just take it easy the first or second round, just get through it, and then the third and fourth rounds I was able to ride at 100 percent. We are trying to work on way more corner speed. And starts. I was pretty happy with my starts but now I’m more consistent. We’ve been working on some things. Physically I feel better, too.”

The East racers will take to the first three races in Salt Lake City, with the West resuming competition June 10. The last West race took place on February 8 in San Diego, which means a four-month break in the action.

Lawrence hasn’t used the break as a break. He’s been working.

“We’ve been just grinding, big days on supercross and I feel amazing really,” he says. “This was just straight hammering.”

We’ll see if all that extra time and effort makes the rookies look more seasoned in the second half of their season.