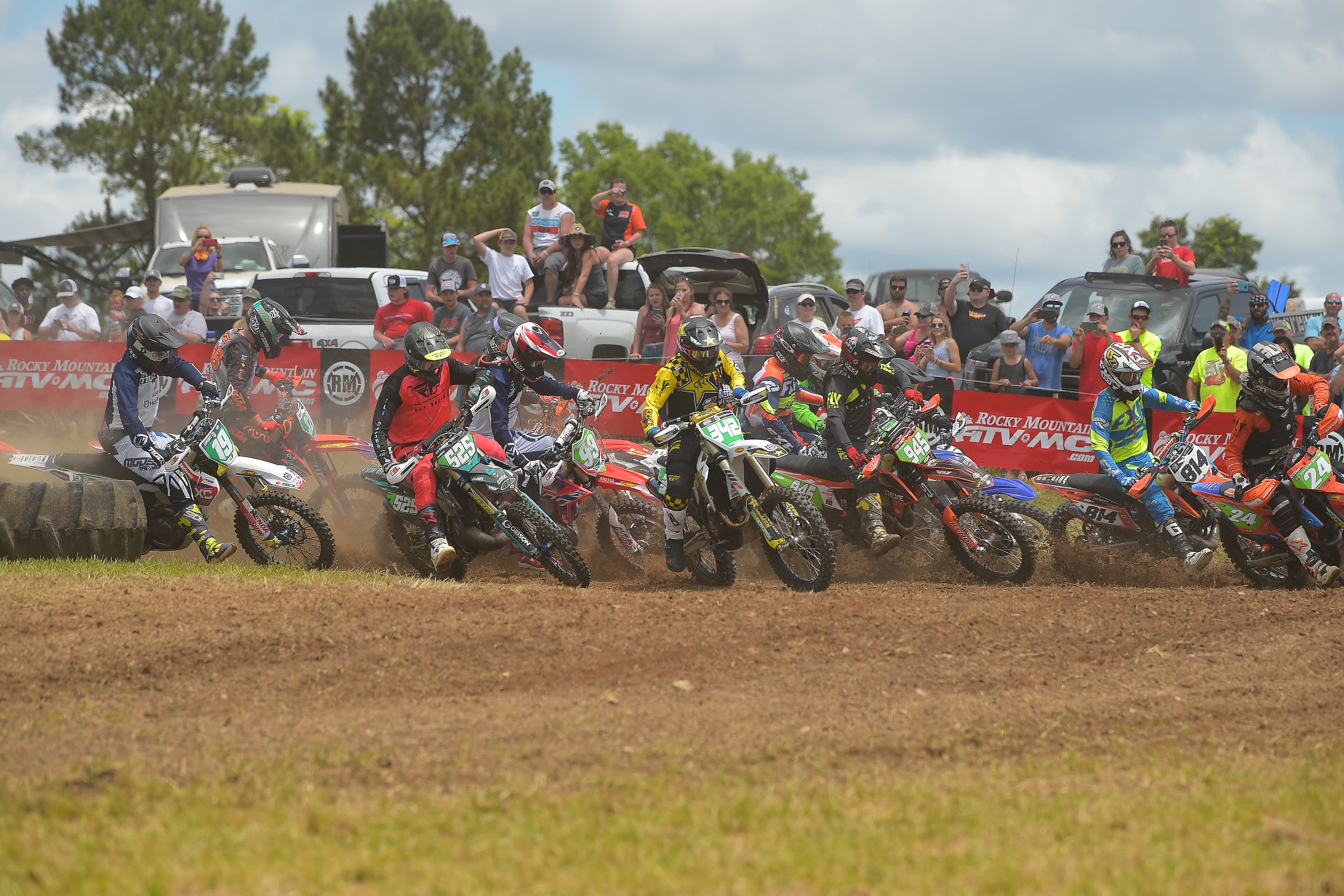 GNCC Report 5 Things We Learned at The Bulldog GNCC

The Grand National Cross Country (GNCC) Racing Series returned to the track last weekend for an action packed The Bulldog GNCC in Georgia. If The Bulldog doesn’t sound like a usual GNCC event, that’s because it isn’t. The Bulldog was held at the Aonia Pass Motocross facility, which usually hosts The General GNCC—the third event of this year. However, since The General was the last round prior to the COVID-19 break in racing, it was decided that this second Aonia Pass event needed a different name, and The Bulldog was born as a nod to the University of Georgia, located just around an hour up the road. Here’s what we learned at the inaugural event.

Great to be Back!

Coming out of the COVID-19 pandemic was no easy task for the GNCC series to organize. The series did not advertise for spectators, and pretty good number of other changes were in place including only allowing one rider and one mechanic on the start, with all mechanics required to wear masks. Regardless of everyone’s opinions on the situation in the world, it was really cool to see everyone come together, follow the rules and do what it takes to return to racing—while remaining socially distant.

The overall atmosphere of the event was positive, as everyone was simply happy to be back at the track ready to go racing. Also, the course layout was much different than the last visit here in mid-March.

How was it different? Well, in March the ground is usually very wet and many areas in the woods tend to hold standing water. Visiting in May saw green leaves on the trees and those wet areas actually turned into perfect dirt. This gave the GNCC track crew the opportunity to mix it up, run some different sections and even add some new sections of trail.

Prior to the event, some folks were concerned about the dust. The open areas did get a little dusty, but in the woods there was actually moisture to be found once tires cut through the top layer. This made for nearly perfect conditions in some spots, and almost zero mud! These changes made it feel like a totally different event than the previous one, even though they both took place on the same property.

After winning the first three rounds of the season, all eyes were on Kailub Russell. KR snagged the holeshot and began to pull out a little bit of a lead, but as the race wore on Ricky Russell (no relation) began to reel Kailub in. KR actually forgot his hydration pack at home and elected to race without one, which is pretty impressive given that the temperatures were in the mid 80s. If you’ve never experienced Georgia heat in May in the 80s, it’s flat out hot!

When the white flag flew, Ricky had pulled all the way up to Kailub’s rear wheel and the duo would battle for the first few miles of the final lap. Radio updates from the track crew began saying that the two Russells were battling bar to bar through the field section just before the three-mile mark. The two disappeared into a short woods section, passing the three-mile marker, but when the two riders were scheduled to pop out into another short field section, only one rider emerged.

In this short woods section, the two riders came together in a pure racing incident that would cause Ricky Russell to collide with a tree hard enough to break his handlebars. Even more unfortunate was that when Ricky went down, part of the handlebars actually impaled his inner thigh. Thankfully, the GNCC track crew and the on-site medical crew were able to act quick enough to get Ricky out and on the way to the hospital pretty quickly. Ricky updated on Tuesday to let everyone know that he’s expected to make a full recovery. He actually cut his femoral artery in the crash, which is very scary as that artery serves as your main source of blood flow to your leg. Good thing everything worked out and it didn’t turn out as bad as it could have.

As for Kailub, he was able to keep everything together through the final miles of that final lap to take the win, which was his fourth win in the four rounds thus far in 2020.

Kawasaki teammates Josh Strang and Jordan Ashburn were also riding really well at The Bulldog. Strang began working his way through the pack around the halfway point of the race. Coming through sixth on the opening lap, Strang would hover around the fifth place spot for a couple of laps before charging to third place. When Ricky Russell went down on the final lap, Strang would inherit the second place position, having just been around four seconds behind the lead duo heading into that final lap.

Strang continued to ride really well throughout the final lap and would actually finish just around four seconds behind Kailub Russell when the checkered flag flew. This will ultimately be a pretty motivating ride for Strang as it’s likely he’s thought of several places he could have cut into Russell’s four-second lead on the final lap. When the series resumes May 31 at the Camp Coker Bullet GNCC in South Carolina, Strang may very well come out swinging and looking to bid for the race win.

Ashburn spent the majority of the race in the fourth-place position, and would end the day fourth in the XC1 class. This race will ultimately serve as good motivation for Ashburn as well as this shows him he has the speed to run with the front of the pack and it’s only a matter of time until we see him landing on the podium at the end of the day.

The AmPro Yamaha team had a great weekend as well with both of their riders landing on the podium in their respective classes. Layne Michael ran in the second place position of the XC1 class for the opening laps but would drop out of a podium position. He pushed his way back into the third place spot in the XC1 class at the end of the day.

This was Michael’s first XC2 podium finish. Much like the motivation the Kawasaki teammates received from this event, Layne now knows he has the speed and endurance to end up at the front of the pack. Now that he has put it all together once, he very well could land many more of these top finishes in the future.

This year could prove to be one of the tightest XC2 seasons  ever, as there are a number of riders capable of running at the front of the pack. In fact, the first three rounds of the series saw three different XC2 class winners! The Bulldog would see the first repeat XC2 class winner of the season as Craig Delong put in one of the most impressive rides of his career to take the win.

The XC2 class starts on the second row, one minute behind the XC1 class. Each row in a GNCC event has their start time adjusted to the front row, so riders on the second row can find themselves in the overall lead on adjusted time, but may not physically lead the overall on the track. In the opening laps, Delong had actually worked his way to within one minute of Kailub Russell, which actually put Delong as the overall leader on the opening lap.

When the checkered flag flew, Delong ended the day with the XC2 class win and actually finished third overall—a career best. The opening rounds saw Delong, Witkowski, and Johnny Girroir challenging each other at the front of the XC2 pack, but this race saw another rider make a bid for the XC2 podium. Ryder Lafferty was injured prior to the beginning of the 2020 season, and missed the opening rounds. He would then come out swinging at The Bulldog to finish a career-best second place in the XC2 class and fifth place overall.

Ryder is the nephew of eight-time National Enduro champion, Mike Lafferty, and speed runs in the Lafferty family. Ryder has been pretty close to the front of the XC2 pack several times and even landed an XC2 podium in 2019, but The Bulldog would be his best ride to date and establishes him as another contender in the XC2 class. In addition to Lafferty, Delong, Witkowski, and Girroir, the Factory Beta riders of Cody Barnes and Thorn Devlin has been putting in solid rides thus far in 2020, as has Tely Energy’s Liam Draper, who won an XC2 race in 2019.

This sets the 2020 season up to be one of the most exciting championship battles in the history of the XC2 class. As the season wears on we very well may see all of these guys swapping podium positions and race wins.