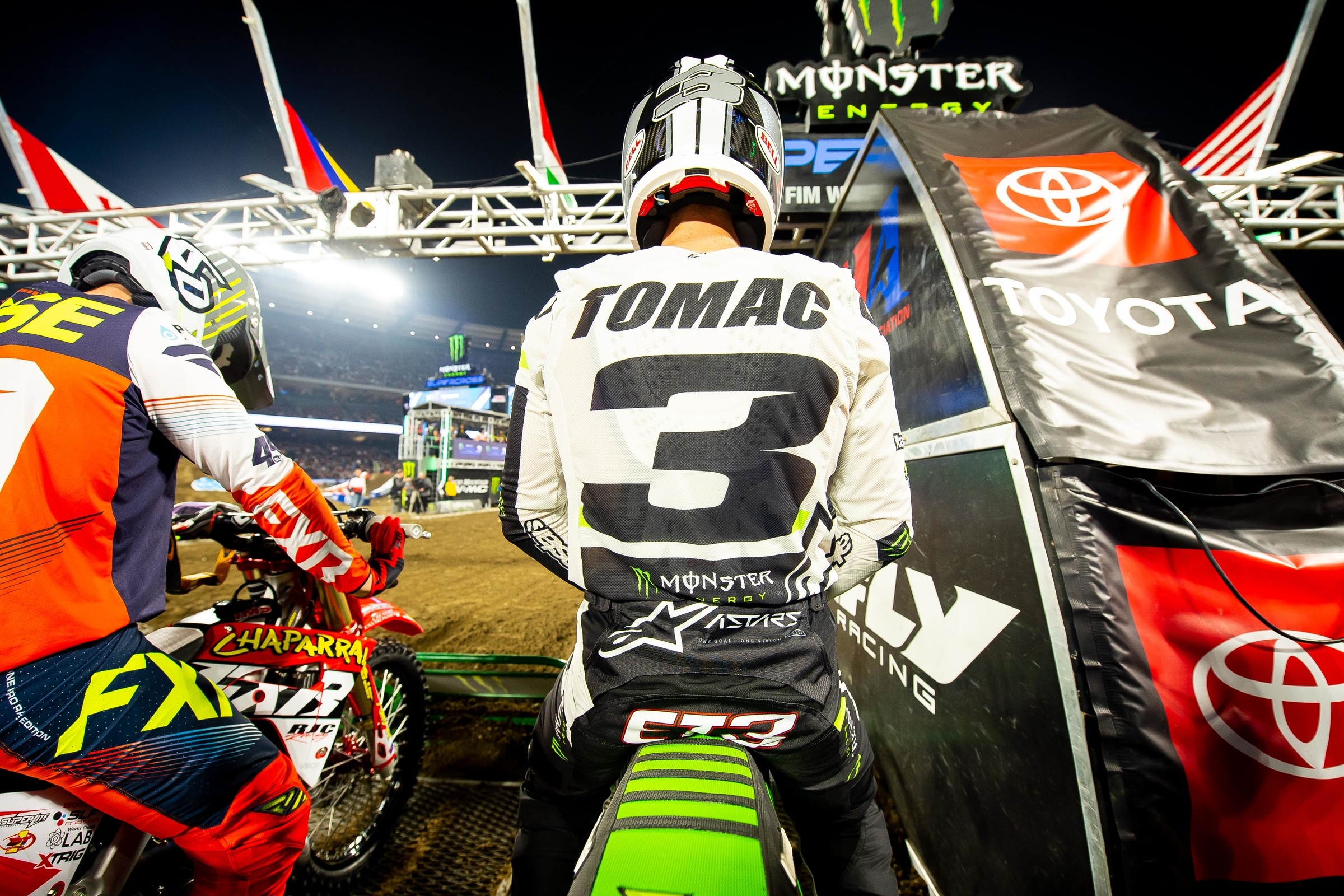 “I thought the supercross series was great, man!” enthused Jeremy McGrath, a seven-time AMA Supercross Champion who is totally allowed to say absolutely anything he wants about the sport of stadium motocross, a sport he ruled like Michael Schumacher did Formula 1 a decade back. “In the end of the day that pass Tomac put on Roczen at Daytona a few months ago could have been worth a couple million dollars because they may end up not having the races or not finishing the series. If they don’t finish it or whatever, that’s going to be one of the most expensive passes in the history of the sport, I would say. I’m really happy that Eli is riding strong.”

Yes, Eli Tomac is riding strong, hence the P1 position in what has been an astonishingly odd and abbreviated 2020 Monster Energy AMA Supercross Championship. But Honda HRC company man Ken Roczen has been strong, also, leaving Tomac up a mere three points (226 to 223) in the standings. With 10 rounds having been run thus far in ’20, Tomac has won five main events and with an average finishing position of 2.6. On the podium 60 percent of the time before COVID-19 darkened everyone’s door, Tomac executed a slick pass on Roczen with two laps to go to not only win at Daytona International Speedway, but to cast himself as the lead man in the title chase.

So all that was then and this is now, as 900 members of the AMA Pro Racing supercross contingent and community are now beginning to look for their gear bags, suitcases, backpacks and stopwatches in an impending date with history set for Sunday, May 31, 2020 at 451 S. 1400 East, Salt Lake City, Utah—AKA: Rice-Eccles Stadium—for round 11 of the Monster Energy Supercross title fight. And making the 349-mile trek to SLC from his current training base in Cortez, Colorado will be Team Monster Energy Kawasaki’s Tomac. On the clock and full-time in the 450SX classification going back to 2014, Tomac, while being absolutely dominant in the Lucas Oil AMA Pro Motocross Championship the last three 450MX seasons, has yet to win the AMA 450SX Championship. It’s a title Tomac lusts for not only for the championship itself, but to further solidify his legacy as one of America’s all-time greats of the sport. Since the races last took place, everyone’s lives have changed a bit, but no one more so than Eli, who has a new infant daughter Lev Loe with mom Jessica. It was good timing for new baby to arrive while racing and traveling was on hold, but now, with racing back on schedule, Tomac now looks to wrap up his self-exiled riding and training program in Colorado for what will be the home stretch of the ’20 stadium season. Racing is back. The morning after the National Association of Stock Car Auto Racing (NASCAR) ran its first post-COVID-19 at Darlington Raceway in the Carolinas, Eli Tomac took a breather and spoke with us about his supercross task at hand.

“No, I didn’t watch NASCAR yesterday,” admitted Tomac. “I was out and about and just out on my property, so I was outside all day yesterday. I was out of the loop.”

For a good reason, though, as Tomac has been putting the finishing touches on pre-championship-fight program he unabashedly hopes will bring him a red #1 plate to affix to his KX450 come Anaheim 1 circa 2021.

“We’ve just been getting ready,” offered Tomac. “We’ve been getting ready for a couple weeks now. I mean we’ve been on the supercross track probably, oh gosh, three or four weeks now, at least, because we kind of expected this to happen and it ended up happening. They’re getting us in at the end of May and now it’s just trying to fine-tune it and somewhat ramp it up here in the last two weeks and try to be ready for that Sunday.”

Seriously, Formula 1, MotoGP, NASCAR, WorldSBK and of course, supercross, you know a series, and for the past couple of months you could find the world’s best motor racers looking to a firm date to reach for, adhere to and to plan to. Well, as of this week, that date has come.

“Yeah, that’s what is most important, just having a target to hit,” pointed out Tomac to what has been a hell of a lot of waiting around before word just came down. “Beforehand, it was just so tough to be motivated when you have no idea of what you’re going to be doing and when you’ll be doing it. I still like to get out and ride and train, but it’s still weird not having a set target date, you know? It’s just so huge for us to have these dates and I’m just really pumped that we get to finish this series out.

“It’ll still be really good racing,” added Tomac, absolutely sure he and the other 40 racers burning fossil fuel inside Rice-Eccles Stadium will put on an epic show this forthcoming Sunday. “It’s a bummer the fans aren’t in the stadium and we can’t really hear those fans when we race, but there are so many people that just want something to happen right now, so all of us just being out on the track right now is going to be huge for the whole sport.”

Remember, Tomac is the only rider who could say he was leading the 450SX points when the lockdown began. With the AMA Supercross rulebook not specifying a minimum number of races in order to crown a champion, Eli Tomac stood in position to gain the most if the season ended after Daytona. It’s quite possible he would have been declared champion. However, a racer is a racer, and Eli is keen to understand that being handed a title in a most unexpected manner wouldn’t have felt right at all, not with him, and not with the public or really anyone else.

Riding, training, researching and developing a full-on factory race bike basically in exile in Colorado before trying to take the entire world over is one thing, but being a dad? What in the world is that like? How does that apply to going after a title?

“Oh, being a dad is so awesome,” enthused Tomac. “I mean everyone says that. It changes your life, right? But it really does. It all changes your perspective on a lot of things and that’s been the real blessing in all of this. We’ve had the chance to spend time with our little girl, so that’s been a real positive out of all of this mess.”

That’s all cool, ethereal and precious, but have you changed any dirty diapers?

There will be more change coming. Racing will be back, but it will be run in a much different way come May 31 than it was back in March, when it stopped. So I ask Eli, what in the world do you think this whole racing set-up is going to be like over in Salt Lake City, Utah come the last Sunday of this month?

“Yeah, well, what I’m most interested to see is what we do with our track layouts and how much different each round will be,” centered Tomac. “I just don’t know that yet. That will be a big factor and then racing that many races on that surface and on that dirt, the track crew is going to have it cut out for them. That’s something on my mind. It’s like, ‘Hey, how much different of a racing surface are we going to have each round?’”

With three 450cc Lucas Oil AMA Pro Motocross Championship titles to is name in the AMA archive that holds such things, not only does Eli Tomac hold sway in the contemporary era of American natural terrain motocross racing, he’s absolutely determined to keep ringing up the numbers. First, however, everyone needs to go the all systems go call as far as that series is concerned. This year could finally be the year Tomac does the double, racking up both the indoor and outdoor titles. But to do it, those championship series have to actually happen. And while Monster Energy Supercross is back, the Lucas Oil AMA Pro Motocross Championship remains in a holding pattern, with hopes to start in July, but still so many things unsure about what tracks, states and regions will re-open for that kind of racing.

“Oh… Man… My guess is as good as anyone’s as far as racing the outdoors goes,” says Tomac.

For now, all he can do is work on the one target that has gone back on the calendar.

“My main focus is to get supercross going and we’ll just see what happens with the outdoors from there,” he says. “I guess it depends on the states.”

For athletes so tested and tuned based on a schedule and plan, it hasn’t been easy. This will be one heck of a task for everyone, but it could make the reward even sweeter for whoever gets it.