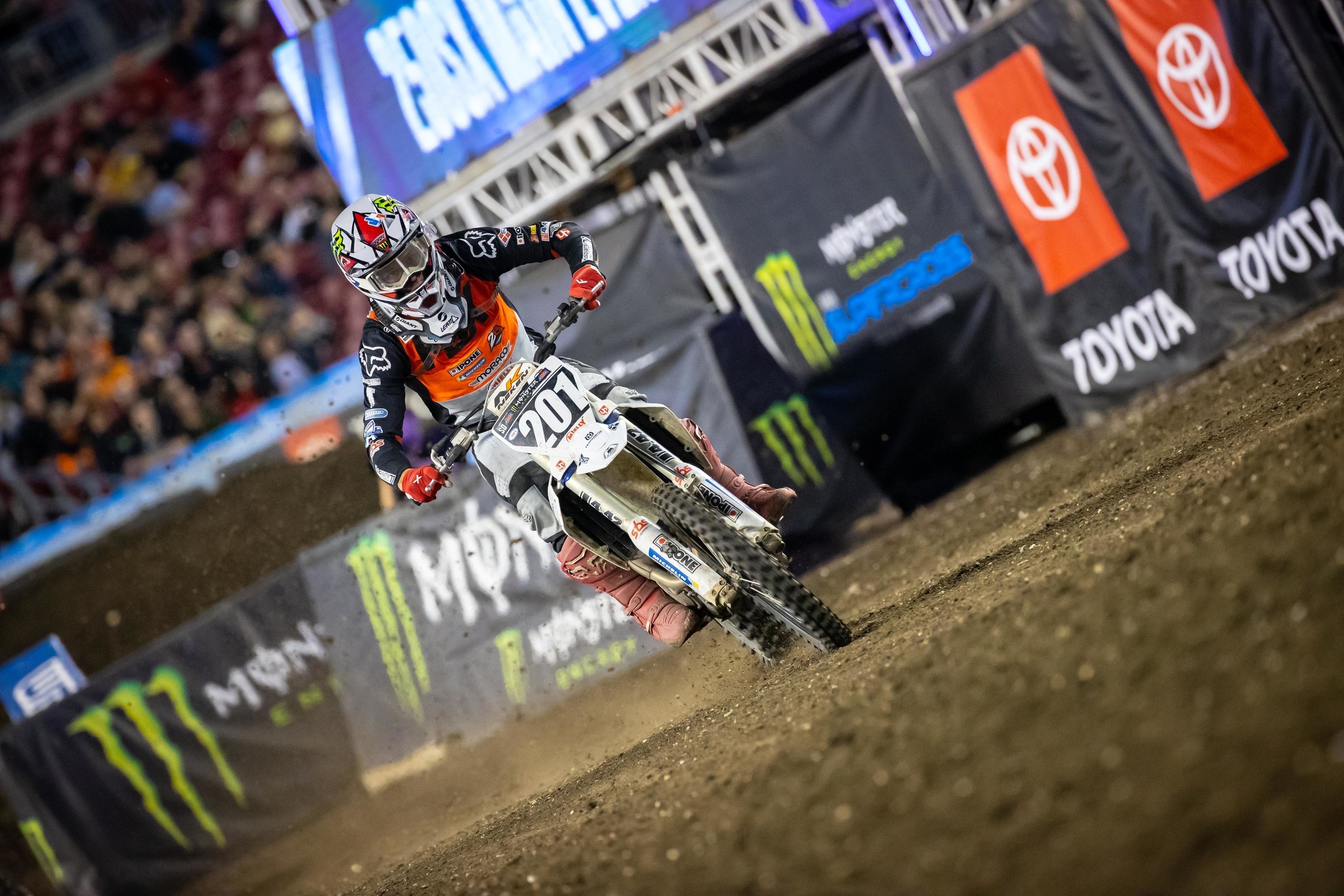 Cedric Soubeyras was a real wild card entry in the 250SX East Region class for Monster Energy Supercross. The Frenchman has proven himself in the U.S. with solid 450 rides before, but jumping back to the 250s made him a real unknown threat. He did well, scoring 13th in the main after getting passed by Josh Hill on the last lap, but he would like to be inside the top ten.

He’ll work on that, but at the same time he has other obligations, like racing in the United Kingdom this weekend. “Soubs” is one busy guy!

We talked to him after the race in Tampa.

Racer X: Where did this even come from? This opportunity, the team? How did it all happen?
Cedric Soubeyras: I wanted to come here with my French team, Moraco [Motorcycle Parts], then I got contacted by Ricky [Renner]. Ricky wanted to build a new team, so I was kind of interested to help them out. They helped me back. So, we found a good deal that is both ways a good thing. We are doing all of the championship, except this weekend, I have to race the UK Championship, so I will miss Arlington. It’s more easy for my team as well to come here and race over here. So, they bring their bikes. I have a practice bike.

So, it is still your team a little bit? It’s combined?
Yeah. My team brought all the parts, tires, clutches, all these things. We got some more from France and stuff. They brought the bikes. They have the truck. They are going to drive around the championship. It’s pretty tough for us to organize all of this, but they kind of did a great thing. For us, it was a good deal to go closer with Ricky and Connor. Now I’m looking forward to better my result every weekend.

Where are you living and riding and all that?
I’m staying in Florida at the moment, close to Daytona. A friend of mine has the YZF USA company, like little pit bikes. I’m staying at his home. It’s close to Daytona. I was practicing at [Blake] Baggett’s place this week. I’m going to stay in Florida for the first couple of months, and then after Foxboro I will fly to California for the two next ones.

Have you been based in Florida ever before, or is this new?
Yeah. I’ve been based last year. I was staying in Marvin’s home. It was kind of more easy because I was by myself. I couldn’t bring all the crew with me at Marvin’s home! So we have a small flat in my friend’s home, and it’s pretty good. I like Florida. It’s a good place to practice as well. Good weather. It’s a good place to get better.

So, it’s not just you? It’s a couple guys living in this place?
Yeah. There is my mechanic that is French and talking only French! Then my girlfriend. My mom was there for the first week because she just wanted to come over to see the first race.

How’d the race go? I heard it was a last lap battle.
[Laughs] Yeah. I got ninth in the heat, so I was expecting to be maybe 15th or between 15 and 20. It was not my main goal. I wanted to be close to the top ten. I even get closer from [Jo] Shimoda at one point. I didn’t want to get lapped. I was pushing, pushing and then [Shane] McElrath passed me like two laps to go! Josh Hill came back and we got a fight in the last lap. I end 13th. It’s still good. When I saw my friend Brian Moreau down this afternoon it was pretty difficult to get back to racing. Overall for me, it’s a good day. Finishing 13th is fine.

This was pretty late getting on the 250. You were telling me earlier.
Yeah, pretty late. I’m racing the French SX tours until December, so after I got to take a break. So, I didn’t do anything. I raced Dortmund on the 450 as well. So, racing on the 250, I just had the bikes and we did two days of motocross, three days of supercross and came there.

That’s it?
That’s it. On the stock bike.

So, the first time you rode the race bike was here?
It’s the only bike I have at the moment. So, I practiced and then we just put DCR cams and that’s it. Just standard pipe and everything.

Now that you’ve raced it, are like, We’ve got to get this or that?
Yeah. I think we saw where I was struggling when I was trying some triples out of the corner. I think Ricky had some ideas to make the bike better. We’re going to try some stuff. Unfortunately, I got to fly back to the UK to race the final of the UK championship next weekend. So, I’m missing Arlington. I’m pretty sad about that. I know that Ricky is going to try his best to get some parts that will make the bike better. But it’s not only the bike. I know that technically I need to work on myself. I need to work physically as well. It’s not only bikes. It’s a combination of everything. So, he’s going to work on the bike. I’m going to work on myself.

So, if I have this right, you did the SX tour, which is in France for the most part but includes Geneva, Switzerland, too, and then Germany, and then here, and then UK? That’s a lot of different racing!
Yeah. I did some UK before in January. So, there was two rounds. But I pretty much messed up my championship this year in the UK. So, I’m trying to save the podium so far. I signed a contract that I have to do all the championship. For sure I will prefer staying there and riding Arlington, but when I have a contract, I’m following it. So, I will be in the UK next weekend.